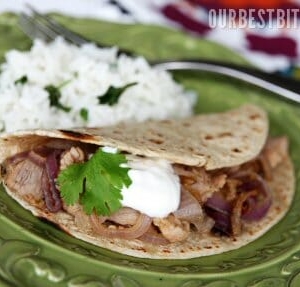 It’s April 1st!  How the heck is it already April?  Someone answer me that.  It can’t be April.  My life is so hectic that this month completely sneaked up on me.  I actually love April though.  I’m having a birthday this month (Woo hoo!  You’re probably all wondering what to send me.  Don’t worry, I’ll post a list.)  I also have a kiddo turning the big 0-3 this month.  And my 7th wedding anniversary is this month.  See?  Fun times.  I’m predicting lots of dessert in the next 30 days.

If your life is as crazy as mine and you don’t even know what month it is- then you’ll love this quick and easy dinner.  It comes from this month’s issue of Cooking Light (page 74 if you want to get particular) and although I did make some changes, the bones remain the same.  I was surprised at how much flavor was packed in with very few ingredients.  Try it out! 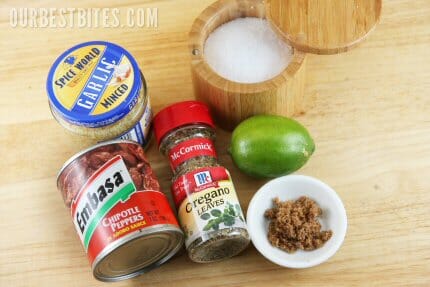 You’ll need some thinly sliced pork.  The original recipes calls for pounding a pork tenderloin with a meat mallet until it’s thin.  I took a much easier route and just sliced it thin 🙂  And I didn’t even use a tenderloin- I had a pork sirloin roast in my freezer so I defrosted it it almost all the way (it’s easier to slice when it’s just barely frozen) and then sliced it up thin. 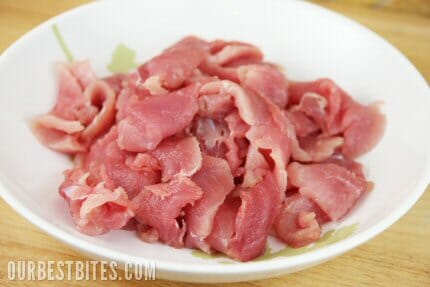 The easy marinade comes together really quick.  And this is a recipe that you don’t have to marinade for hours on end.  It really just sits while you’re prepping everything else, however- if you have the time, go ahead and make it early.  I prepped the pork during afternoon nap time (not my nap time, oh how I wish!) so it was all ready to go at dinner time.

Here’s something I always keep in my fridge: bottled minced garlic.  I usually have bottled minced ginger too.  Generally speaking, in most cases fresh garlic is best- but there are exceptions, and something like this, that cooks so fast, is one of them. 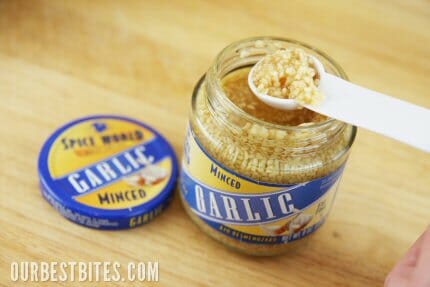 Plus it’s also just a great time-saver, and also good for emergencies when you find yourself out of the fresh stuff. One of my favorite things is that garlicky juice that’s in there, it adds tons of flavor.

Also going into the mix is lime zest- again, adds tons of flavor.  Use a microplane grater, or a regular fine-hole cheese grater and then dice it up with a knife so it’s nice and fine. 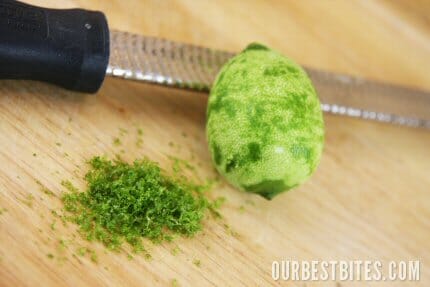 Also needed is a tiny bit of brown sugar (I even used brown sugar Splenda because it’s all I had)  and oregano.  Use fresh oregano if you have it, and dried if you don’t.  I was starting to sprinkle in dry oregano when I looked out my window at my totally dead and frozen garden and noticed little green speckles.  I ran out there and what do you know- my oregano is popping up again!  Nice timing oregano.

Lastly- these can’t be called chipotle pork tacos without the chipotle!  I started writing a bunch of info about chipotles and decided it would be much better in its very own post.  So read this!  You will find canned chipotle peppers in adobo sauce in the Latin isle of the grocery store.  There is also Chipotle powder, which we use a lot, but I do think that the actual stuff is better in this recipe.  They’re smoky and spicy and wonderful.  If you’re like me and can’t handle much heat, either use just a bit, or avoid the peppers all together and add the sauce, which tastes amazing.  I actually used a couple tablespoons of adobo sauce (maybe 1 1/2 Tbs?) and no actual peppers.  It was mild enough that my little toddlers gobbled it right up.  Not much heat at all.  Mix that all up and either let it sit there, or pop it in a ziplock bag in the fridge for later. 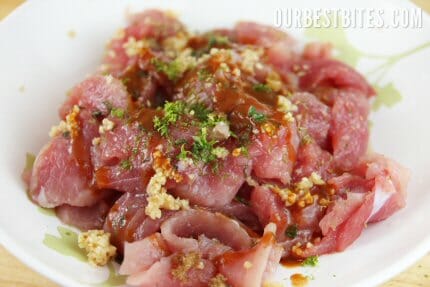 Heat up a skillet with a bit of olive oil and saute some red onions (original recipe calls for shallots and non-stick spray- onions work great!) 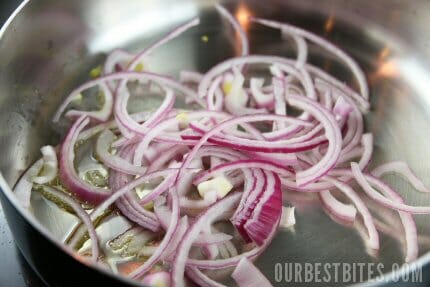 It only takes few minutes for them to get tender.  We’re not caramelizing here. 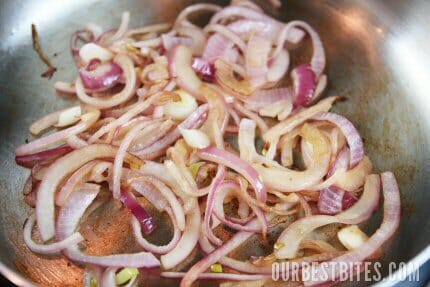 Take those onions out and toss in the pork mixture.  It should be sliced thin so it only takes a few minutes to cook. 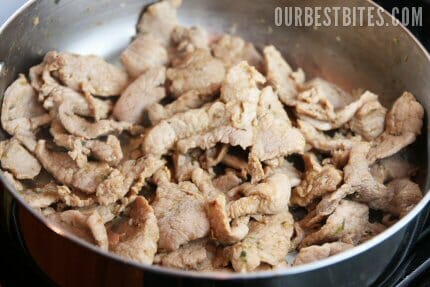 While that’s sitting there staying warm, get your tortillas ready.  I found a new tortilla that I love.  Well they’re not “new,” just new to me.  I spotted them at my local Albertsons.  When it comes to corn tortillas I like white better than yellow.  But I feel like it’s sort of hit or miss with which ones I buy.  I like the flavor, but I hate how they can be tricky to work with (ie cracking) and sometimes they can be flavorless and kind of…chewy?  Not sure what the word is!  Anyway- I really like these ones by La Tortilla Factory.  It says it’s a “unique blend of corn and wheat” and it sort of tastes like a hybrid to me.  They’re soft and they bend and roll easily (I’m seeing taquitos in my future) and I really liked the flavor.  Sort of like a blend between a flour and corn tortilla.  Anyway, there’s my voluntary infomercial for the day.  I think they should send me a pallet of tortillas or something… 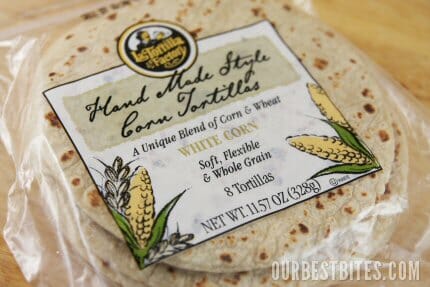 Here’s a quick tip- toss your tortillas on a warm grill!  You get a little bit of a smoky char, and they get nice and toasty.  An indoor grill pan would work too.  Whatever you do, do something.  I don’t really ever eat tortillas straight out of the bag.  You can heat them in a dry skillet, or my fave- a hot skillet with just a bit of non-stick spray, or at the very least warm them up in the microwave so they’re soft. 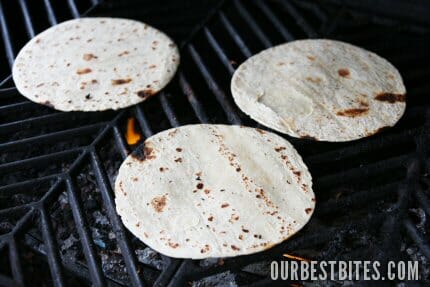 Weird, it totally looks like that one is on fire.  I swear it’s not!

Toss the onions into the pork mixture and serve in tortillas.  I served it with this Lime-Cilantro Rice (pretty much my most favorite rice side dish ever).  It would be great with or without the pineapple in the rice.  We put the rice into the tortillas with the pork mixture and thought the sweetness of the pineapple in there was perfect with the brown sugar in the pork, and also the smoky flavor of the chipotle.  It all went together really well.  You could serve it on the side too.  And don’t forget a dallop of sour cream and a sprinkle of chopped cilantro! 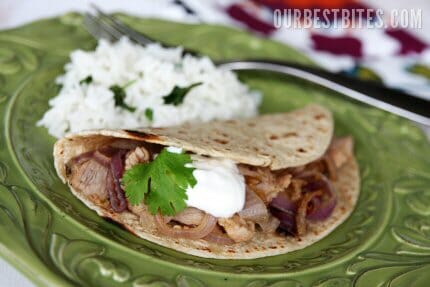 Combine thinly sliced pork, lime zest, lime juice, oregano, brown sugar, chipotles, garlic, and salt.  Set aside.  Heat a large skillet over medium heat and add 1 tsp olive oil.  Add onions and sauté for 4 minutes or until tender.  Remove from pan and set aside.  Add 2 tsp olive oil to pan and add pork mixture.  Saute for 3-4 minutes or until no longer pink.  Add pork to onions.  Warm tortillas on a hot grill and fill with pork mixture.  Top with sour cream and cilantro.

Lastly- we’ll be in Salt Lake City again this weekend!  You can find us at the Bountiful Deseret Book on Saturday from 12-1:30, and then we’ll be at the down town store from 6-8 for Ladies Night!  Come see us, we’d love to say hello!