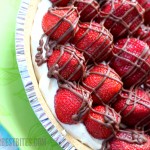 Every spring, I go on and on about strawberries. I think I get so excited because they’re so beautiful and cheap and, like the first really great watermelon in summer or the first sweet, crisp apple in the fall, or juicy orange in the winter, sweet, fat strawberries are one of the first signs of spring.

I realized recently that we don’t have a strawberry pie recipe on our blog. Problem is, as gorgeous as those pies loaded with shiny glazed strawberries are, I don’t really like the strawberry glazes or junkets–they often taste a little artificial or have weird textures to them. Instead, I love this pie that still showcases the beautiful berries, but the glaze is replaced with sweetened whipped cream and cream cheese. Then the strawberries are drizzled in chocolate because that is how strawberries were intended to be eaten. Promise.

Plus, it’s super easy. Easy as pie. Oh, Kate, that was lame.

You’ll need a quart of fresh, beautiful strawberries (pick out the prettiest ones of all sizes–the rest will be doomed to live the remainder of their lives with low self-esteem in a jam jar), whipping cream, powdered sugar, a little brown sugar (which I forgot in the picture), cream cheese, almond or vanilla extract, and about 1-2 ounces of chocolate (roughly 1 regular candy bar), and a graham cracker crust. 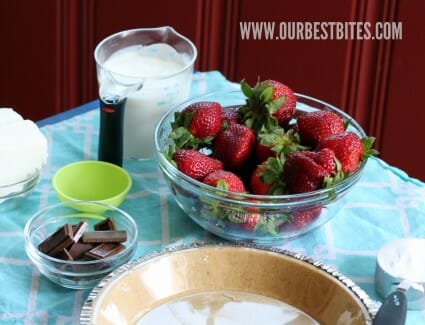 In a medium bowl, mix the cream cheese, vanilla extract, and brown sugar together until light and fluffy. In a separate bowl, mix the heavy cream with the powdered sugar until medium peaks form. Add about a cup of the whipped cream mixture to the cream cheese mixture and beat until it’s smooth and combined. Add the remaining whipped cream mixture, mixing until just combined. 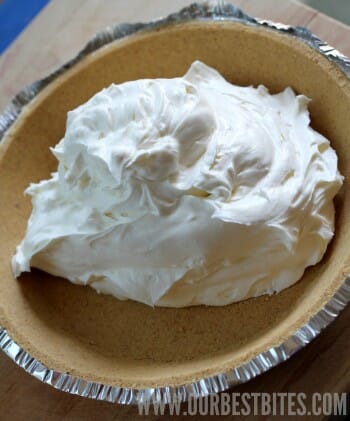 and spread it out evenly.  Isn’t it magical how this exact amount of whipped cream and cream cheese perfectly fill a graham cracker crust?  It’s like it was meant to be…

Pop that bad boy into the refrigerator for a few minutes while you slice the stems off the strawberries. Make sure the strawberries are as dry as possible–you don’t have to get crazy here, just whip out a paper towel and gently blot the un-cut surfaces. 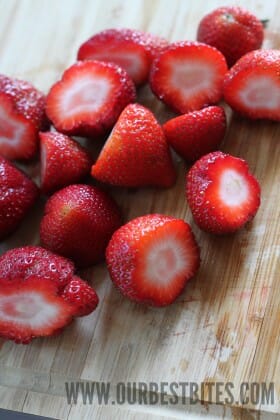 Arrange the strawberries, cut side down, on the whipped cream mixture. You can press them way down if you want (and even add another layer of berries if you feel the urge) or just have them sticking out like I do here. Because they’re just so pretty. 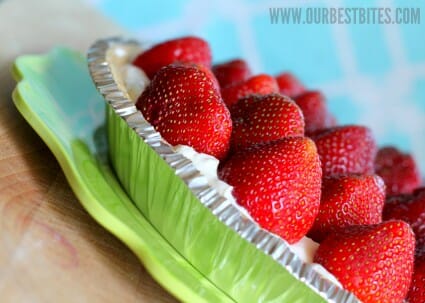 Break the chocolate into chunks and place it in a small, heavy-duty Ziploc bag. Microwave for 45 seconds-1 minute, stopping every 20 seconds or so to mash the bag around. You don’t want the bag to get hot, you just want the chocolate to melt.  When the chocolate is melted, snip a corner off the bag and drizzle the chocolate over the berries. 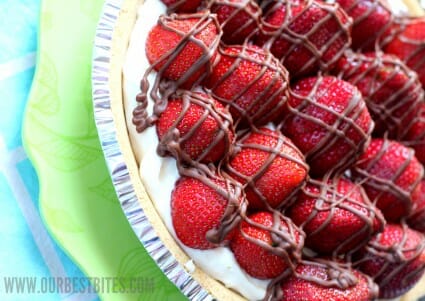 Refrigerate the pie for at least 3 hours before serving. Wonder if Kate will ever again post a recipe that’s not a dessert. Know that I will. I promise. But until then, you’ve got pie… 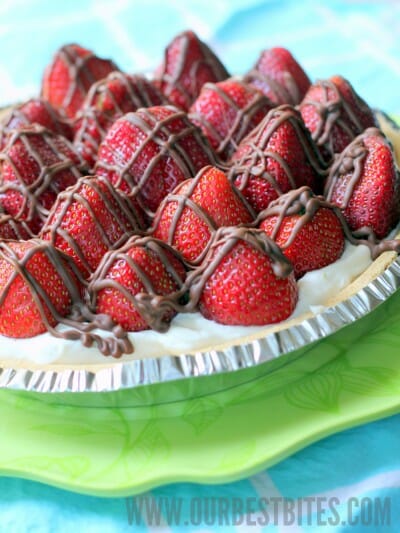 Chocolate-Drizzled Strawberries and Cream Pie
Recipe by Our Best Bites

In a medium bowl, beat the softened cream cheese, brown sugar, and vanilla until light and fluffy. In a separate large bowl, beat the whipping cream and powdered sugar until medium peaks form.  Add about 1 c. of the whipping cream mixture to the cream cheese mixture. Beat until smooth and well-combined. Add the remaining whipping cream mixture and mix until just combined.  Spread in the graham cracker crust and refrigerate for a few minutes while you prepare the strawberries.

Wash the strawberries and cut off the stems. Blot dry with a paper towel and then gently press, cut side down, into the whipped cream mixture. Set aside.

If using a chocolate bar, break it into equal pieces and place in a small Ziploc bag. Microwave for 1-1 1/2 minutes, stopping the microwave every 20 seconds to mash the bag. You want the chocolate to be melted but not hot at all. When the chocolate is melted, snip a corner off the bag and drizzle it over the strawberries. Refrigerate for at least three hours before serving. Serves 8.

Also, make sure you mark your calenders for some upcoming book signings!
Sara will be in Provo next week, at two locations- make sure to go say hello!  You’ll also see dates below for two signings in Boise, ID and also one in Seattle, WA!