Note: This post is not sponsored–it’s simply an informational post in the vein of what used to be “The Scoop”–kitchen products we use and love!

We frequently get asked what our favorite cookware is. Usually, the person asking is either someone who’s getting married (or buying cookware for someone who’s getting married) or someone who’s looking to replace the stuff they got for their wedding 10 years (or more) before. P.S. I kind of wish there were 10-year-anniversary showers, for when all your wedding towels have fallen apart and you realize those dishes you thought were super adorable when you were a child bride were actually kind of a terrible life choice.

I’ve tried it all. I’ve had cheap non-stick pans. I’ve had nice, hard-anodized pans. I’ve had stainless steel pans. And if I were to do it all over again, I’d skip over an entire boxed set and just buy things piece by piece. Instead of the box, I’d get a 12-inch non-stick or stainless steel skillet with a lid (for stovetop casseroles, browning meats, cooking rice), a 1-quart stainless steel saucepan (for boiling small amounts of liquid), a 2-quart  stainless steel saucepan (for heating larger quantities of liquid), 1 or 2 8-inch non-stick omelet pan(s) (for omelets, a single grilled cheese), a 7-ish quart enamel Dutch Oven (really, you could forgo the 12″ skillet and just use this–you can do everything the 12″ skillet does with this, plus make soups, cook whole birds, deep fry, go stovetop-to-oven, cook pasta, etc.; the Lodge brand is great and gorgeous and a fraction of the cost of the Le Creuset, but the Le Creuset is the Le Creuset). 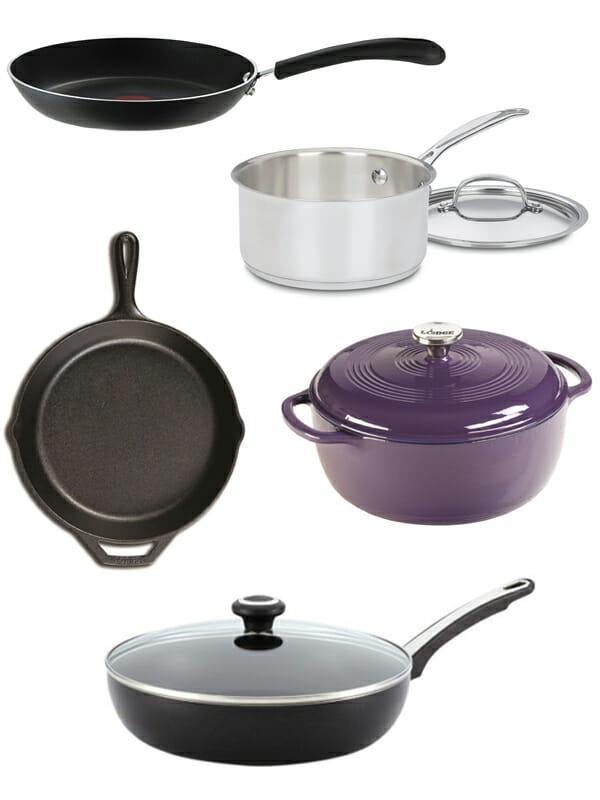 That said, if I had to pick ONE type of pan to have in my kitchen, it would be a couple of cast iron pans. 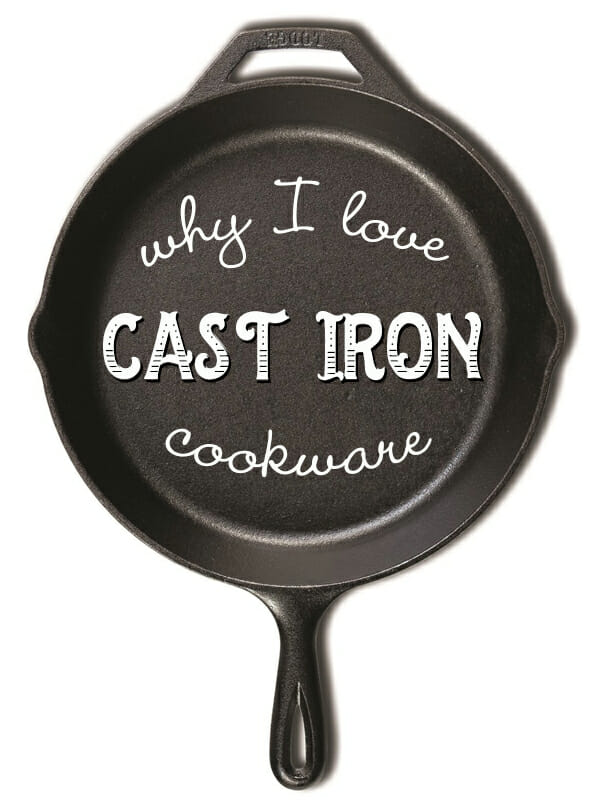 So why do I love them? First of all, they’re cheap–a 10.25” pre-seasoned cast iron skillet runs about $21 and if you take care of it, it will literally last a lifetime (that cannot be said for just about any other pan I’ve ever owned.) The more you use it, the better “seasoned” it becomes and it actually begins to form its own naturally nonstick surface. You can easily and safely go from stovetop to oven (so you can sear a pork tenderloin on the stovetop and then pop it in the oven to finish cooking without having to worry about whether the pan or any parts are oven-safe, or at what temperature they stop being safe. It’s iron. It’s all oven safe.) It conducts heat evenly, leading to beautiful browning when you sear meats or bake breads. You can make deep dish pizza (or a whole bunch of individual deep dish pizzas! Or pizzookies! Or brownie skillets!) Plus, once it’s well-seasoned, cleaning it is a breeze (in fact, you shouldn’t really use soap, although I’ve been known to add a drop or two of dish soap in more dire situations and we’re still going strong.) You can use them for outdoor cooking, you can use them as actual kitchen tools (like weighing down a piece of meat while it cooks or smashing stuff. Have I ever smashed something with a cast iron pan? No. Could I? Yes.)

So what are the downsides? You can’t put them in the dishwasher. And they’re a little finicky to care for–you need to dry them completely and keep them lightly oiled, at least in the beginning, so they don’t rust. They’re very, very heavy–like, break-a-floor-tile-if-you-drop-it heavy. But even with those minor drawbacks, there’s not a single piece of kitchen equipment I could recommend more.

So what are some of our favorite recipes where you can really use cast iron? Besides the pizzookies I talked about earlier, there’s this Honey Orange Pork Tenderloin, this Cajun-Style Hash Brown Skillet, and these hash brown potatoes and these Cat Head Biscuits–if you listen really closely, the Cajun-Style Hash Brown Skillet is probably calling your name and saying it wants to be made this weekend…