So I have always been a big fan of all things Oz. The Judy Garland movie was one of my mom’s favorite movies and I remember watching it with her for the first time (in fact, it’s the first movie I remember, like, sitting down and watching.) After that, I became obsessed with all things Oz. The books. Remember Return to Oz, with those freaky wheelers and Mombi, the witch that would switch heads? I was simultaneously terrified and fascinated by that movie. When I got older, I discovered Wicked (the musical, which I loved, and then the book which ended up being a little too disturbing for me.) Last year, I bought the Urban Decay eyeshadow palettes for Glinda and Theodora (the wicked witch) from Oz the Great and Powerful. So when we were asked by Legends of Oz: Dorothy’s Return if we’d be interested in helping them celebrate the release of the movie (this Friday! Eeek!), that was definitely a yes.

The cast is kind of amazing–Lea Michele as Dorothy, Dan Aykroyd as the Scarecrow, Jim Belushi as The Lion, Kelsey Grammer as The Tin Man, Bernadette Peters as Glinda, Martin Short as The Jester (he’s a new character and the villain), Oliver Platt as Wiser the Owl, Hugh Dancy as Marshal Mallow, Megan Hilty as The China Princess, and Patrick Stewart as Tugg the Tugboat. I mean, right? 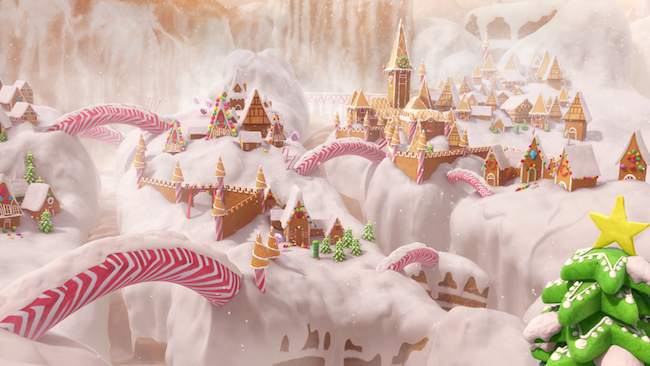 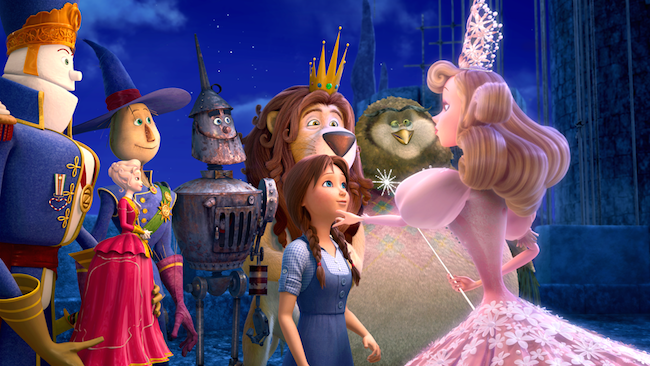 I’ve always loved Glinda, so when we were thinking of something we could make to go along with the movie, I was pretty sure we needed wands. 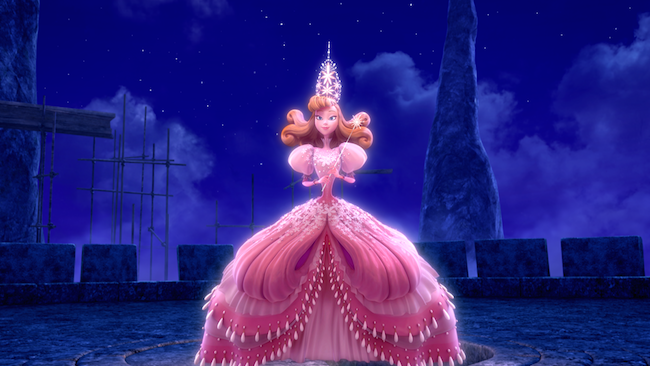 After a series of thwarted efforts to get things off the ground (sheer inability to find pretzel rods ANYWHERE, sugar cookies that would just kept failing), I wound up with wands that I loved better than any of my original plans. Plus, they were easy, delicious, AND adorable, which is a trifecta of difficulty.

You’re going to need to make a batch of Rice Krispie Treats with 3 tablespoons butter, an 8-ounce bag of strawberry marshmallows, and 5 cups of Rice Krispies. Melt the butter in a large stock pot over medium-low heat, then add the marshmallows and stir frequently. When the marshmallows are melted and bubbling, remove from heat and add the cereal. Press into a greased 9×9″ pan (or a 9×13″ pan, but press the mixture tightly into about half of the pan.) You’ll also need small wooden dowels (available in craft stores and the craft section of department stores), a large star-shaped cookie cutter, almond bark, white or pink sanding sugar, and pink and white ribbons.

Cut the Rice Krispie Treats into stars (greasing the cookie cutter can help. Also, if it’s not deep enough to cut all the way through, you can trace the edges with a sharp knife. ALSO. You can combine the scraps to about the same thickness and then cut them again, just be sure to pack it together pretty tightly so the stars don’t fall off the dowels.) You should get about 6-8 stars (if you use the scraps.)

Carefully insert a dowel into the bottom of each star (if you have extra time, you can freeze them first, but you don’t have to. Just make sure they’re completely cool before you cut them.)

Melt the almond bark and then carefully dip one side of the star into the white chocolate.

Place them non-dipped side down on a flat surface and then sprinkle generously with sanding sugar (I used this opal sanding sugar from Orson Gygi that I snagged on our trip to Utah a couple of weeks ago.)

Repeat with the remaining wands and allow them to set up completely (you can let them chill out in the fridge or freezer). When they’re ready, tie each wand with pink and white ribbons and enjoy!

These were a huge hit at our house with the grown-ups and kids (and the girls and the boys, although my 9-year-old boy would swear up and down that he was only mildly interested in the non-pink parts. Which was a lie.)

Glinda the Good Witch Wands
By Our Best Bites

1 batch Rice Krispie treats made with an 8-ounce bag of strawberry marshmallows (follow the directions above or on the bag of marshmallows), made in a 9×9″ pan (or a 9×13″ pan, but packed tightly into only half of the pan)
Mini wooden dowels (available in the craft section of major department stores)
Almond bark
Pink and white ribbons

Prepare the Rice Krispie Treats and allow them to cool completely (in the fridge or freezer isn’t a terrible idea). Turn the treats out onto a piece of parchment paper, then using a greased star-shaped cookie cutter (large), cut the treats into star shapes, reassembling the scraps as needed.

Insert a mini dowel into the bottom of each star.

Melt the almond bark according to package directions, then carefully dip one side of the treat into the white chocolate. Sprinkle generously with white or pink (or glittery) sanding sugar and allow to set up completely. When the chocolate is solid, tie with white and pink ribbons. Makes 6-8 wands (depending on how many scraps you re-use.)

This post was sponsored by Legends of Oz: Dorothy’s Return, but all ideas, opinions, and Glinda the Good Witch Wands are our own.