Remember back when Kate and I went to compete at the Better Homes and Gardens Blogger Cook-Off?  And we told you about all of the amazing food we ate?  Well the morning of the actual cook-off we had an awesome breakfast and this was one of the dishes served.  I remember thinking that it would be great for Christmas or Easter morning so when I got home I promptly looked up the recipe in the cook book.  My thoughts were confirmed even more when I saw that it’s a make-ahead dish- which is the only kind I make for Christmas morning!  My family standard is this Overnight Breakfast Casserole, but this Ham and Cheese Souffle Roll would be a great addition as well.  It does take a little bit of time to put together, but you can do it a day ahead of time so the only thing you need to do Christmas morning is pop it in the oven.

You start by making a basic roux.  Melted butter, flour and pepper go into the pan and get whisked up into a nice clump.  Sometimes clumps are a good thing!  Slowly add milk while whisking constantly to get rid of the lumps.  (Okay, so maybe clumps aren’t all that great…) 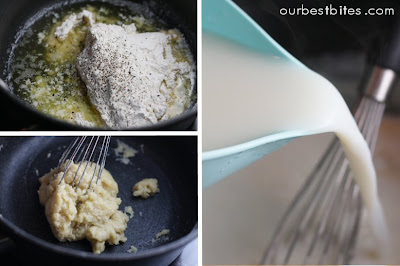 You’ll cook that mixture till it’s nice and thick and add it to some egg yolks.  We’re making a souffle here folks!  Don’t you feel fancy? 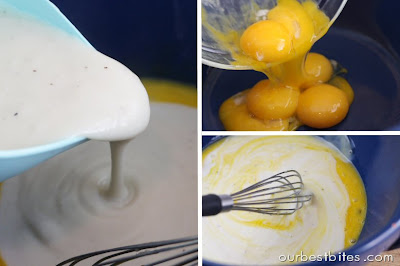 In another bowl you are going to beat your egg whites.  And you’ll add some of this to help them along: 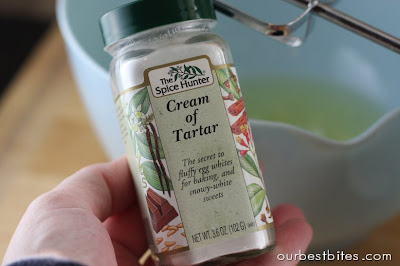 Interesting fact:  Did you know that cream of tartar is a derivative of the wine-making process??  It comes from tartaric acid which is naturally found in grapes.  The white powdery stuff forms as the juice ferments.  I honestly had no idea until I read the back of my bottle last summer.  And now you have a great conversation starter at parties and on first dates.  (But only use that one if you’re positive you don’t want to be invited to any other parties or on a second date.)  Anyhoo, it helps stabilize egg whites too.  Kind of amazing and kind of weird at the same time.

You want egg whites with stiff peaks.  You can see (if you look closely) in the picture below that soft peaks just barely form a mound but aren’t stable at all.  Medium peaks will stand up, but the peaks will fall over (bottom left) and with stiff peaks (bottom right) the peaks stand straight up. 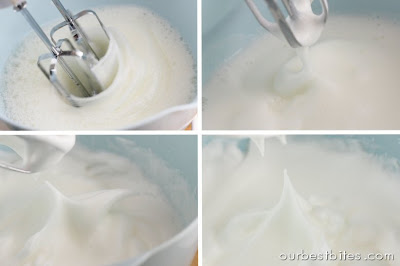 Now if you’re a souffle making novice, know the egg whites are the key!  Whatever you do, never stir the egg whites, always fold.  That means taking your spoon or spatula and slowly scraping the bottom of the mixture and gently folding it over to the top.  Add just a bit of your egg whites to the flour mixture and fold it in until combined.  It’s okay to have some lumps.  (See?  I was right, lumps are still sometimes good.) 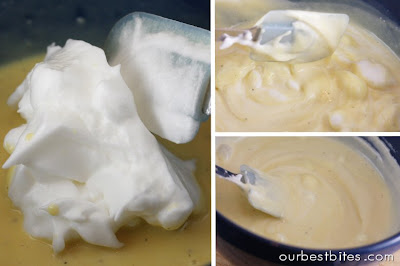 Now take that mixture and slowly fold it back into the rest of the egg whites, a little at time.  Gently fold so it stays nice and fluffy. 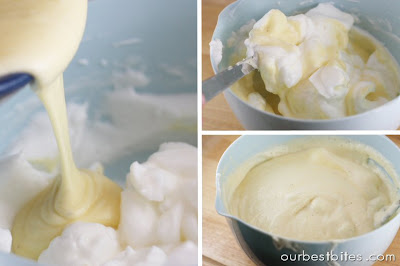 That’s your souffle!  Pour it into your prepared pan.  The pan has been covered in foil and greased with butter and lightly floured.  (Don’t try to cheat and use non-stick spray.  Even non-stick spray with flour.  I totally did that here and almost ruined mine!) 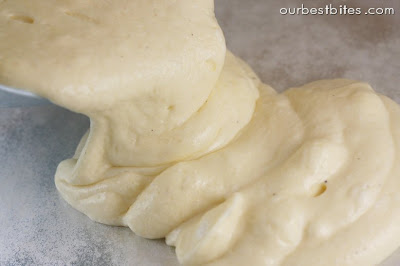 Bake it in the oven and you’ll see it start poofing up- beautiful! 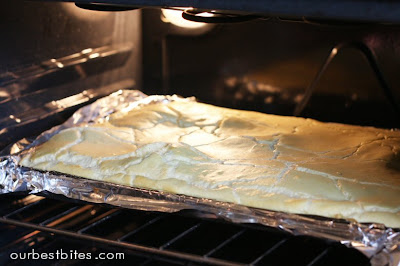 Once it comes out of the oven it will flatten out. 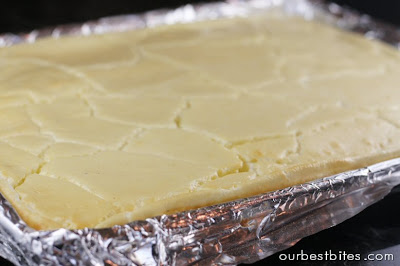 You have to be very careful on these next steps so you don’t tear the souffle.  Flip it out over another piece of foil that’s placed over a large cutting board or pan- the foil should be larger than the one you have and it also needs to be well greased.  Can’t emphasize the greasing enough!  Then very carefully peel the top layer of foil off.  If your souffle is sticking, just be patient and work very slowly.  Since I was dumb and used non-stick spray, mine was a little stuck. 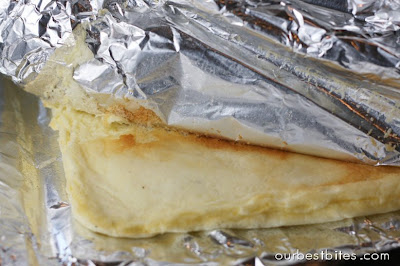 Then top your souffle with creamy swiss cheese and sliced ham. 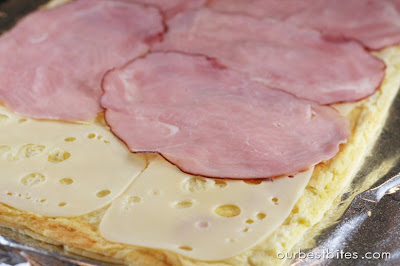 Use the foil on the bottom to help you roll the souffle up, as you slowly peel it off.  I love how in the cook book it specifically tells you to not roll the foil inside of the souffle.  Foil filled souffle would not taste good. 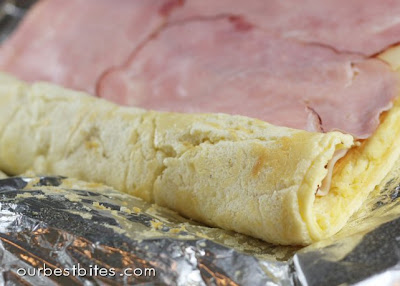 At this point, you’re all rolled up.  You should have extra room at the end of your piece of foil and you can just wrap it right up and put it in your fridge where it can stay up to 24 hours. 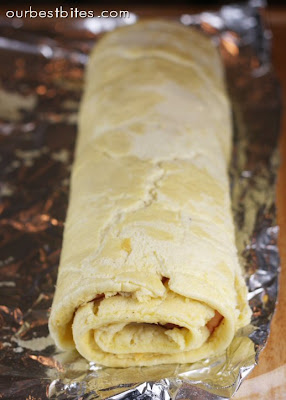 When you’re ready to eat it, bake it in the oven.  The egg will fluff up and the cheese will melt and the flavor of the ham will come out and it will look awesome.  Like this. 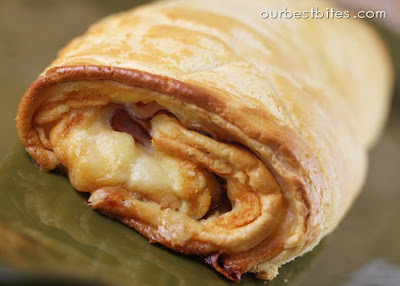 At the BHG Kitchens they served it with an amazing sauce on the side.  Later when looking at the ingredient list it became clear to me why I wanted to drink it.  When I made it at home, I devised a lower-calorie version of their sauce, see my notes at the end of the recipe.  You can drizzle the sauce on top, or just serve on the side. 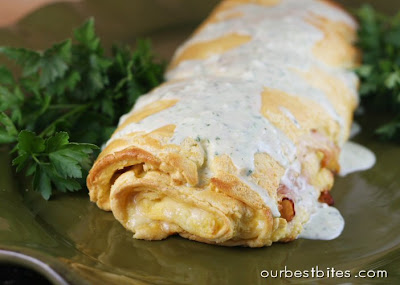 Slice it up to serve and drizzle more sauce if you want.  And you will want. 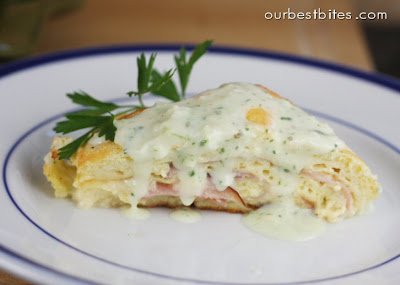 *Some of you asked about using parchment paper instead of foil.  I asked our friend Juli from the BHG test kitchens and she tested it out for us!  Here are her notes: We didn’t ever test it using parchment, but I tried it today and it worked very well! You do still have to work slowly, and coax the souffle with a spatula to get it to release, but it does, and with most of the lovely browned surface intact. I also inverted onto a sheet of parchment, and that worked fine for rolling up, and now I can bake on that same sheet of parchment. Thank you Juli!

2.  In a medium saucepan melt 4 Tbs butter.  Stir in flour and pepper.  Gradually and slowly stir in milk while whisking to remove lumps.  Cook and stir until mixture is thickened and bubbly; cool slightly.  Place egg yolks in a medium bowl; gradually stir in milk mixture.  In a large bowl beat egg whites and cream of tartar with an electric mixer until stiff peaks form (tips stand straight.)  Fold some of the beaten egg whites inot the egg white mixture.  Fold egg yolk mixture into the remaining beaten egg whites.  Spread in the prepared baking pan.

3.  Bake about 20 minutes or until souffle is puffed and a knife inserted in center comes out clean.

5.  Place ham and cheese slices in single layers on top of souffle.  Starting from a short side, use foil on baking sheet to lift and help roll up souffle.  Don’t roll the foil inside.  use the foil to lift souffle roll onto another flat baking sheet.  Cover souffle with foil and chill for 2-24 hours.

6.  Before serving, preheat oven to 350.  Bake souffle roll, covered with the foil, about 45  minutes or until heated through.  To serve, uncover and transfer souffle roll to a warm serving platter (a giant spatula works well, you can sort of slide the whole roll while helping it with the spatula).  If desired, spoon a little sauce over the top.  Slice with a serrated knife; serve with remaining sauce.  If desired, garnish with snipped parsley.

BHG Parsley Sauce: In a blender or food processor combine 1/2 C ligthly packed fresh parsley sprigs; 2 green onions, cut up; and 1 tsp dry basil.  Cover and blend or process until finely chopped.  Add 1 1/2 C whipping cream, 1 Tbs cornstarch, 1 Tbs dijon mustard, and 1/4 tsp salt.  Cover and blend or process for 10-20 seconds or until mixture is slightly thickened.  Don’t over process, or you’ll make butter! You can make to this point ahead of time and store in fridge.  When ready to serve, shake sauce; transfer to a medium saucepan, and cook while stirring over medium heat until thickened and bubbly.  Cook and stir for 2 minutes more.


Low-Cal Parsley Sauce:  For these photos I made my own, lighter version of this sauce by making my Guiltless Alfredo Sauce.  Decrease milk to 1 1/2 C and to the blender mixture add 1/2 C roughly chopped parsley, 1 tsp dried basil, 2 green onions (roughly chopped), and 1 Tbs dijon mustard.  Follow the rest of the recipe as directed. 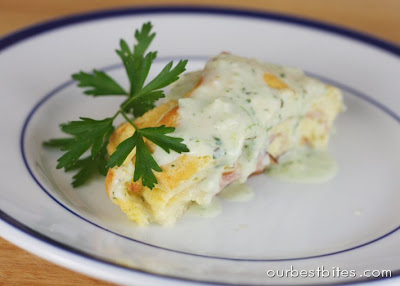 I actually thought the left overs of this dish the next day were even better!