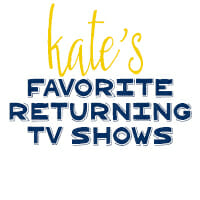 I loved talking favorite off-the-air TV shows a few weeks ago and it was so fun to chat with you guys about your favorites! Since we had so much fun, and since so many of you asked what my favorite shows are that are currently on the air, I can’t not tell you? Right?

A few disclaimers: I realized after I put this all together that I didn’t include Mad Men because it wasn’t on anyone’s radar–it starts up again next spring. I also realize that most of these shows are not shows that should be watched with little kids. Pay attention to ratings and content warnings and use your good judgement to determine if these shows are right for you. 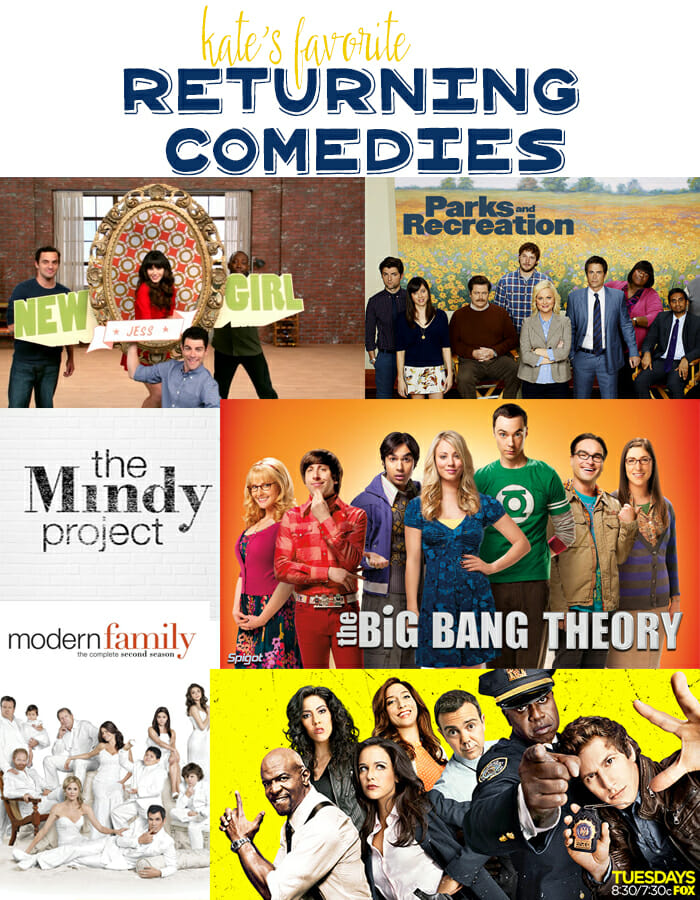 New Girl. This show has its ups and downs, but when it’s funny, it’s reallyreally funny. Basically, Zooey Deschanel is a quirky hipster science teacher that shares an apartment with a bunch of different, single guys. It premieres September 16 at 9/8 Central on Fox.

Parks & Recreation. So many times when I tell people that I love Parks and Recreation, people tell me, “Oh, I tried it, but the first season was terrible.” I also saw the first season and I agree that it was indeed terrible. Fortunately, it improved a lot–I feel like Parks & Recreation and Brooklyn Nine-Nine are the only two comedies I watch where I don’t have to make any qualifications, it’s just straight up funny no matter what. Ron? April? Chris? I love them all. It’s not on the schedule yet, but I’m guessing it’ll show up late fall or early 2015 on NBC.

The Mindy Project. If you guys watched The Office and loved Kelly Kapur’s airheaded hilarity, it’s alive and well in The Mindy Project. Mindy Kaling plays an OB/GYN who has it all together as a doctor, but is highly dysfunctional in pretty much every other area of her life. My husband hates her, and I agree that she can be annoying, but the supporting cast makes it worth it. It premieres September 16 at 9:30/8:30 Central (right after New Girl) on Fox.

The Big Bang Theory. There’s so much about this show that bugs me. The ridiculous pay increase demands from the cast. The old school joke setup/laugh track. Kaley Cuoco. The characters that are more like caricatures. But. Sometimes they hit it so far out of the park that I just have to overlook all those things. It helps that I’m married to a nerd and I pretty much always dated nerds, so I’m well-aquainted with the nerdy way of life. It premieres on September 22 at 8/7 Central on CBS.

Modern Family. It’s had its ups, it’s had its downs, and I feel like the early seasons are stronger than the most recent seasons, but we still watch and laugh. It doesn’t hurt that Jay (the grandpa) totally reminds me of my dad. Premieres September 24 at 9/8 Central on ABC.

Brooklyn Nine-Nine. My favorite. A cop comedy (naturally), it’s quirky, it doesn’t always go for the broad, giant laughs (like Modern Family or The Big Bang Theory), but the weird characters and crazy (zany? Do I sound like my grandma saying that) situations get me every time. It premieres September 28 at 8:30/7:30 Central on Fox. 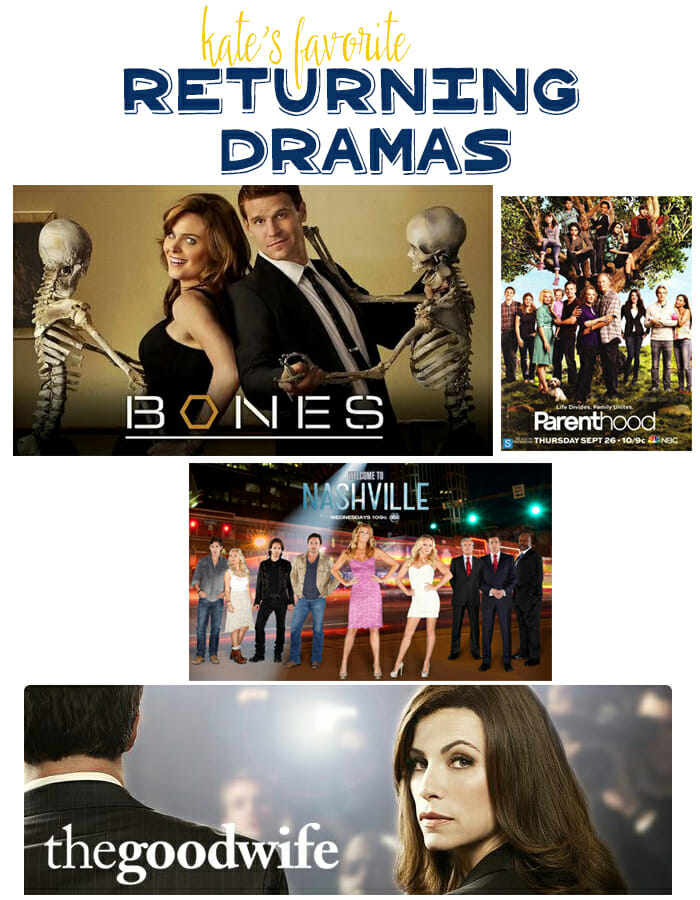 Bones. My husband and I caught up on Bones this summer. To be totally honest, it’s not a great binging show–you start noticing annoying patterns and the procedural format grows a little old after awhile. But. An episode or two at a time? It’s such a fun show (although the first 90 seconds or so should always be approached with caution–they get really creative when discovering bodies to forensically anthropologize. Yes, I know that’s not a word.) Premieres September 25 at 8/7 Central on Fox.

Parenthood. You guys know of my undying love for Friday Night Lights, so it’s not a huge shock that I love this show as well because it shares a creator. I actually tried a few times to watch it and found some of the characters very off-putting, but once I got into it, I couldn’t stop. I went through a mourning period when I caught up with the current episodes because it was just so good. Just a warning–there are lots of feelings. Bring your tissues. The final season premieres September 25 at 10:30/9:30 Central on NBC.

Nashville. Nashville is soapy and ridiculous, but it’s a fun escape and the music is amazing (plus I love me some Connie Britton.) Premieres September 24 at 10/9 Central on ABC.

The Good Wife. So I’ve been watching The Amazing Race for a long time. Because sports run long, then 60 Minutes runs long, if I don’t record at least an hour after The Amazing Race, it often gets cut off. Which means that I often wind up with at least part of an episode of The Good Wife because it’s on after The Amazing Race (wow, that was pretty much the most boring thing I’ve ever written.) Anyway. Even though we were watching things out of order, my husband and I often found ourselves completely engrossed in episodes of The Good Wife. We recently started watching it from the beginning and it’s our latest “just one more” show (you know, “Just one more!” And suddenly it’s 12:30 in the morning and I’m filled with shame and regret, but only a little bit because it’s so good.) Complex, well-written characters, great story lines, awesome writing. It premieres on September 21 at 9/8 Central. 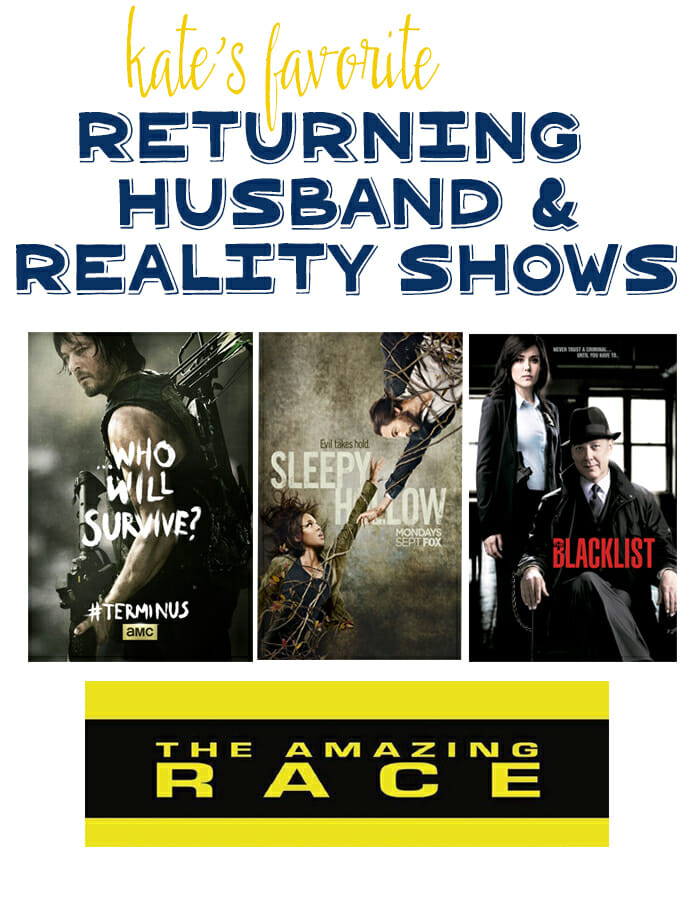 I grouped these together because I only have one reality show: The Amazing Race (well, and Teen Mom, but since I’m in it more for the train wreck value than anything else, I’m not even going there). I fold laundry on Sunday nights and watch The Amazing Race and it’s just my thing. The Amazing Race premieres September 26 at 8/7 Central.

The other category is Husband Shows. My husband has a lot of shows I have little to no interest in, but he has a handful that I watch sometimes from the sidelines, shows I haven’t paid enough attention to to know what’s going on, but I know enough to know I’m interested and would/should/could watch them if I had more time or didn’t fall asleep on the couch at 8:30 pm.

The Walking Dead. I’ve actually watched the whole thing, but some episodes are more interesting to me than others. I lose interest when it’s just swarms of zombies, but when it’s telling a great story, when it’s exploring our most human tendencies in the face of a crisis, I’m all in. It premieres October 12 at 9/8 Central on AMC.

Sleepy Hollow. This is a fun, updated version of the traditional story. Ichabod Crane comes back to life in the present and, while they deal with mystical forces, he has to adjust to adjust to modern society. It strikes a great balance between funny and creepy. It premieres September 22 at 8/7 Central on Fox.

The Blacklist. James Spader is such a great actor that he could make anything amazing. But this thriller is so good that it doesn’t need him to save it, he only pushes it over the top. I’ve fallen asleep enough times (not on purpose…sometimes I just can’t…) that I can’t say for sure what’s going on all the time, but I know enough to know I should start from the beginning. It starts on September 22 at 10/9 Central on NBC.

So tell me–what are your favorites?? Do ours match up? Are they wildly different and you hate my taste in TV?