So I guess this is not super-last-minute, especially for people like me who are nowhere near done with their Christmas shopping. But close to last-minute. I’ve rounded up some of my very most favorite things this holiday season and I hope they’ll help you fill some holes in your Christmas lists! 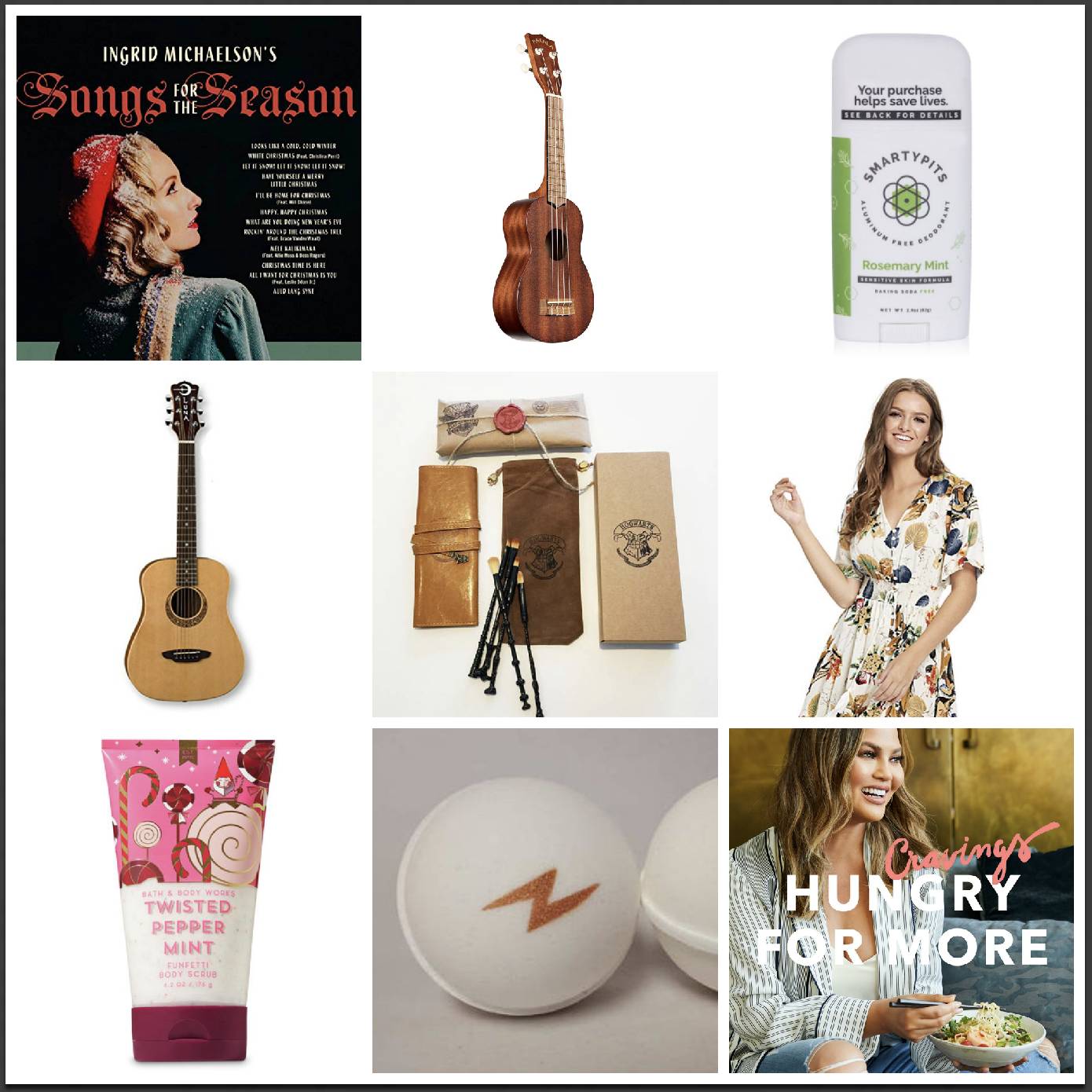 1. Ingrid Michaelson Songs of the Season. Many of you know I’m a huge Ingrid Michaelson fan and her new Christmas album that she just released is amazing. It’s very old-fashioned and nostalgic and her “All I Want for Christmas Is You” duet with Leslie Odom Jr. (aka Aaron Burr from Hamilton) is the only version of this song I’ve ever liked (ducking and covering.) Because of its nostalgic sound, I definitely recommend the vinyl (which means they may need a record player to go along with it!)

2. Makala Ukulele. My daughter begged to learn to play the ukulele from the time we went to Hawaii 5 1/2 years ago, so finally about 3 Christmases ago, we got her a ukulele and some lessons for Christmas. It’s turned into a much bigger hobby for her (she also plays the acoustic guitar–more about that in a second–and her true love is the electric guitar.) But her first love and the one she always comes back to is the ukulele. This is a good little ukulele with a great sound, not too expensive to get their feet wet, but not so cheap or kitschy that they’ll hate it in another two years.

3. Smartypits Deodorant. Okay. Hear me out. Also, don’t just go buy someone deodorant for Christmas because they might get mad. But this truly is one of my FAVORITE new products this year and I need to tell you guys about it! I’ve wondered about natural deodorant for a long time (and, let’s be honest, really really doubted its effectiveness.) I found myself caught in a deodorant-less pickle a little while back and was just overcome by the cuteness of Schmidt’s natural deodorant packaging, so I grabbed some to try.

That was a mistake.

It didn’t really work and to top it all off, it gave me incredible chemical burns which, as it turns out, is a very common side effect of many natural deodorants because of the high concentration of baking soda (who know?!)

Anyway, being the over-sharer that I am, I publicly lamented on Facebook and my friend told me about Smartypits deodorant (and recommended I get the sensitive skin, baking soda free variety). I was hesitant, but I did it and after I got through the learning curve (you have to warm it up against your skin for about 10 seconds before you start swiping), I discovered that not only did it work and not only did I like it, but I liked it better than my traditional deodorant! I told everyone around me to not be scared to tell me if I smelled bad and no one has said anything, even when I ask them outright. I can’t smell anything. My clothes don’t stink. I even went back to my traditional deodorant just to see how I felt and that was stinky. Sometimes when it’s very warm or I’m sweating a lot, I need to re-apply, but otherwise, I’m good pretty much all day.

The catch is that you can’t just pick it up at Target and that it’s expensive. I got my first stick from a local boutique. You can get it at Amazon, but the cheapest place I’ve found it is through The Grove, which is a great way to get natural products at a great price (I’m kind of a Mrs. Meyers junkie, so I get all of it through them.) That link won’t take you straight to the deodorant–you’ll have to search Smartypits (and I recommend sensitive skin, just in case…lots of people are sensitive to the baking soda), but if you use that link, you’ll get $10 off your first order.

Whew. That’s a lot of deodorant talk. Let’s go back to guitars.

4. If you or someone you’re shopping for wants an acoustic guitar and are just starting out, these Luna 3/4 guitars are a great bet. They’re very pretty in person and they sound great, especially once you change the strings. They’re a good size for anyone–Ed Sheeran plays on a 3/4 guitar! My daughter got hers when she was 8 and it was a great size for her. She’s 11 now and wants one that’s just a little bigger, but again, if Ed Sheeran can do it, anyone can. These are great guitars for people, especially kids and shorter people (like me!) who are just getting started.

5. Apollo Box Harry Potter stuff. I love Apollo Box for unique gifts (this pom pom throw is still one of my favorites and has been incredibly popular with you guys as well!). If someone you love is an adult who also loves Harry Potter, they have some really cool higher-end Harry Potter gifts, like the makeup brushes and the bath bomb (which sorts you into your house!) as well as a really cute keepsake Harry Potter bookmark. That’s just a tiny sample of the amazing gifts they have there–definitely poke around and you’ll find something for just about everyone!

6. I ordered this dress for an event and it is seriously one of my favorite things ever. It’s forgiving and flattering. It’s long enough (on me, but I’m also 5’2″–it’s also very cute with opaque tights or leggings and boots) It’s adorable. It comes in tons of patterns. It’s $22 freaking dollars. I think you probably need it and if you don’t, someone does.

7. I’ve always got to include something from Bath & Bodyworks, but Twisted Peppermint is my all-time favorite scent and this body scrub has FUNFETTI SCRUBBERS in it, so using it basically feels/smells like you’re rubbing peppermint frosting all over your body which is actually how I want to leave this life. There’s always some sale going on at B&BW, so get this (and a Winter Candy Apple while you’re at it.)

8. Chrissy Teigen’s Hungry for More. There’s nothing Chrissy Teigen can’t do. She’s smart. Hilarious. Beautiful. Has an adorable line at Target. Writes amazing cookbooks. Her new cookbook is fantastic and if you’re looking for one to add to your collection this Christmas season, this is the one I recommend!

I hope that gives you some gift-giving ideas! Happy Friday!!

If you’re looking for more of our gift guides, check out the Gift Guide Section of our blog!