I’m pretty sure the first time I saw this monkey cake, it was in a picture sent to me by Kate’s sister-in-law.  I remember thinking it was the cutest thing ever, which is why months later when I was searching the internet for ideas for my oldest son’s first birthday this link from Martha Stewart caught my eye.

I wanted to show you all this fun idea because it’s the method that makes it 1. easy and 2. versatile (more on that later!)  So many character cakes require massive amounts of equipment, ingredients, and cake decorating talent, but this is something that really anyone can do!  My second son just celebrated his 2nd birthday and I thought it would be fun to bring back the monkey.  It’s become a tradition in our house, and in the houses of many of my friends!

The trick is using a plain old mixing bowl to bake your cake in.  You’ll want something that’s Pyrex or stainless steal.  I have this set of stainless steel bowls that works great because I can pick from all different sizes. 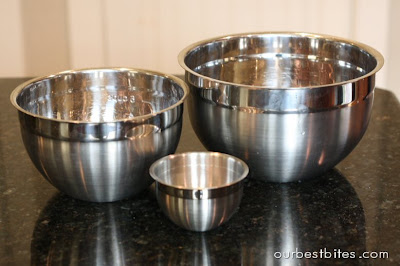 The first time I made this cake I made a large sized one, and then I used that teeny tiny bowl to make a little individual cake for my son- it was a huge hit!

Banana cake is a natural choice for a monkey theme, but any cake flavor will work just fine.  I’ve made Martha’s Banana Cake recipe and it’s really yummy.

Basically you’re just going to fill your round bowl with cake batter and bake it just like that.  When the cake is cooled you can invert it and you’ll have a nice round shape.  You can leave the cake solid, or fill with banana pudding, chocolate frosting, or anything else your little heart desires.

This is where the versatility comes in.  You could turn this into a baseball, a watermelon, a ladybug, a frog, one of those hideous barbie cakes with the giant dresses, etc.  If you’re going for the monkey like I am, then you’ll want the whole thing covered in chocolate.  I’m slathering on this chocolate frosting. 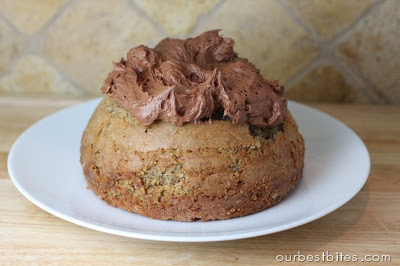 To get the frosting nice and smooth, try running an off-set spatula under really hot water for a minute to warm it up.  Dry it off and then quickly spread.  It helps smooth out lines and bubbles. 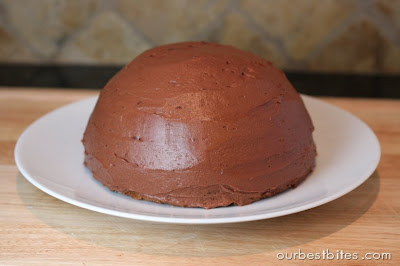 Then you’ll need a little yellow frosting.  You don’t need much at all so I just eyeball it by mixing a little butter, powdered sugar, milk, and food coloring until it’s a good consistency. 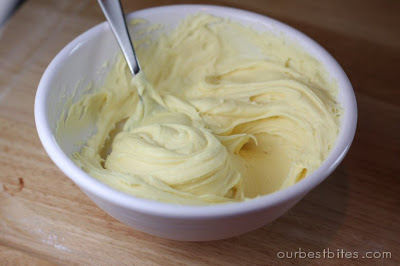 I’ll have you know that being the perfectionist that I am I really wanted to scrape the mouth off my monkey and start over because it’s totally lopsided!   But my husband convinced me to just leave it and show everyone that it’s okay if it’s not perfect, it just gives it character.  I think he just wanted to eat the darn thing. 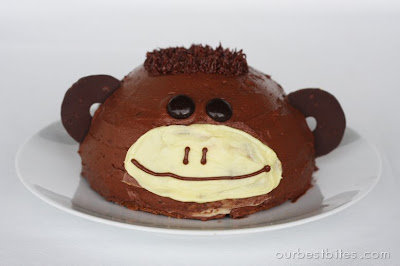 For the hair I used this piping tip, but any star shaped tip will do just fine.  Martha used a halved cupcake for her ears but I find it much easier to just slap on a couple of Keebler Fudge Stripe Cookies.  Just cut a little slit in the side and they pop right in.  My eyes are Jr. Mints, and I just piped on the nose and mouth.  If you can find thin black licorice, you could use that as well.

When I made this cake for the first time I didn’t know if it would be big enough, so I came up with this cupcake idea to match.  I think the cupcakes were a bigger hit, especially with the kids! 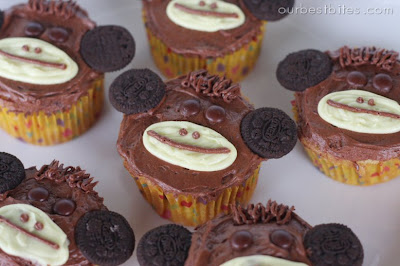 Again, a quick and easy idea that you don’t need much skill or equipment for.  I just pipe on the mouth part and give them a little squiggle of hair on top.  Miniature oreos make the perfect ears, I separate the cookies and use one side for each ear.   And lastly, the mini M&M’s are the perfect size for eyes.  Done!  They really don’t take long to make. 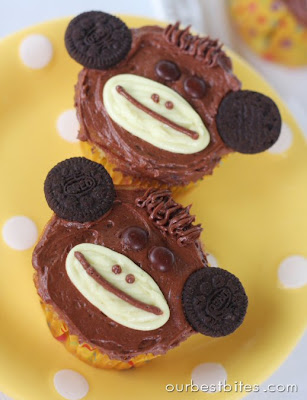 Kiddos and adults will go bananas for these cute little guys!
And what did my birthday boy think?  You be the judge. 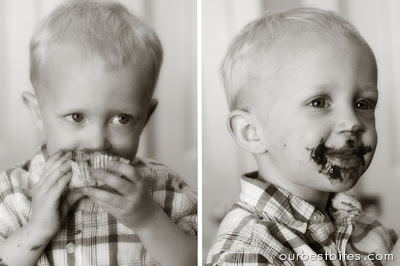