Some of you may be wondering why there is an image of Michael Scott, branch manager of Dunder Mifflen Scranton, on the beginning of this post. Well let me start by saying that this isn’t actually Sara typing, it’s her husband Eric. If you’re an avid reader of this blog you may feel like you know Sara. You might know she’s obsessed with chocolate and limes. You might know she can’t swallow a plain cherry tomato even if her life depended on it. You might even know she cringes at the word “panties.” However, one thing you might not know is that she’s completely accident prone. Especially in the kitchen. Which is why it didn’t come as too much of a surprise this morning when my dear, sweet wife grabbed the handle of a skillet just moments after it came out of a 500-degree oven. Yeah, ouch. For those of you who are fans of The Office and have seen this famous episode, you know the rest of the story. One clean CT scan later…we’ve determined that Sara’s okay, too. Unfortunately, her hand now has frostbite from sitting in a bath of freezing cold ice all day, so she has asked me to type for her. I assure you that she will quickly recover and be back to writing witty commentary soon…thank goodness for bubble wrap.

The recipe today is awesome. I’m an average guy, so I think it’s awesome because it tastes amazing. But Sara tells me it’s awesome because there’s NO yeast in it. Just a bunch of other random stuff that somehow lets it fake being a real cinnamon roll. No yeast means no rising and no waiting and no nightmares for all of you yeast-o-phobes. You just mix it, roll it, bake it, and eat it. I think even a guy could do it. (And by guy, I’m not talking about the food-blogging guys who are actually reading this post, I’m talking about the average Joe who likes to eat, but probably doesn’t even know where things such as baking soda are even stored in their kitchen. Sara tells me I have to specify this or she’ll get hate mail from hoards of offended man-foodies. For the record, I totally hooked Sara on our first date when I impressed her with my mad cooking skills. Two words: Boboli Pizza.) Alright, from this point on I’m turning it over to Sara and typing exactly what she says because this is taking way too long with her making me delete all of the inappropriate commentary. (But come on, she actually told me to write something about disliking soggy nuts. Really? You think I can let that one go?)

Preheat the oven to 400 degrees.
In a food processor, combine the cottage cheese, buttermilk, sugar, melted butter, and vanilla. 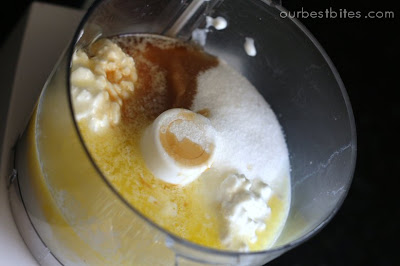 Process until smooth, about 10 seconds. Add the flour, baking powder, salt, and baking soda and pulse in short bursts just until the dough clumps together (don’t over-process). The dough will be very soft, probably softer than you’re used to. Don’t add anymore flour!
Scrape the dough out onto a lightly floured surface and knead a few times just until smooth. 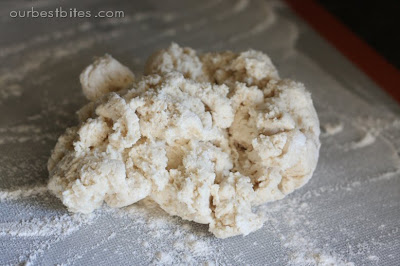 Roll the dough into a rectangle, about 12×15 inches.

Now put your filling on. The pictures below are from when I made the recipe as written in Fine Cooking. We decided we weren’t too fond of nuts inside the rolls themselves because they tend to get soft after baking. I did, however, like the addition of the allspice and cloves. Next time I’ll probably stick to my normal cinnamon roll filling, but still include the extra spices.

After it’s filled, you know the drill. Roll it, slice it, dice and entice it….(totally my husband’s line) 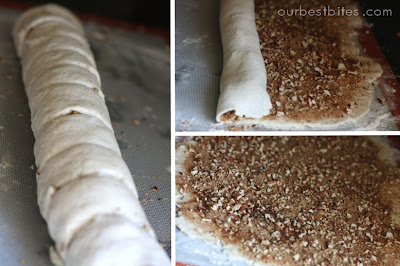 Okay now, forget about cinnamon rolls…my family inhaled the orange roll version. Pretty self explanatory-same drill, just with orange roll filling. If you have a favorite recipe, use it or use my quick version as noted above.

After the rolls are filled and cut. Place them in a pan that has been sprayed with cooking spray. The recipe in Fine Cooking tells you to bake the rolls in a springform pan. However, the batch I cooked in a spring form pan were very overdone on the bottom. I cooked my orange rolls in a ceramic pie pan and they were perfect. So I suggest using a glass or ceramic pan vs. a springform pan.

Bake for 20-25 minutes or until the tops are golden brown. Not gonna lie–I was completely doubtful when these went into the oven. But when they came out? Wow! 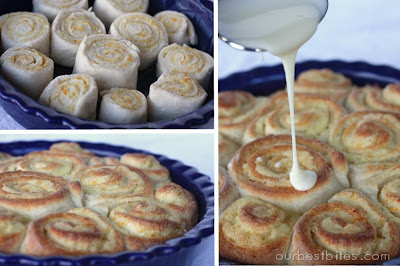 When the rolls have a few minutes left in the oven. Whisk your glaze ingredients together. When the rolls are done cooking, let them cool for five minutes. Then spread the glaze on and eat those suckers warm. They are seriously so soft and tender and delicious! You’ll be so surprised. 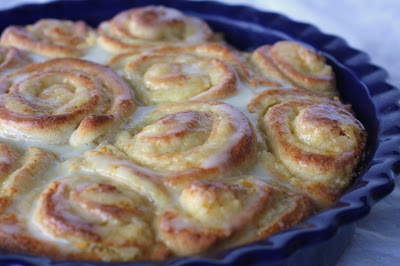 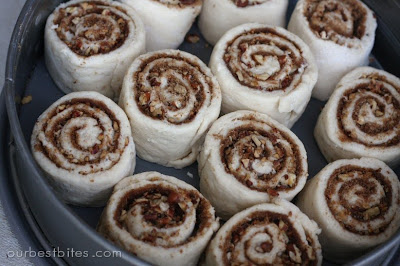 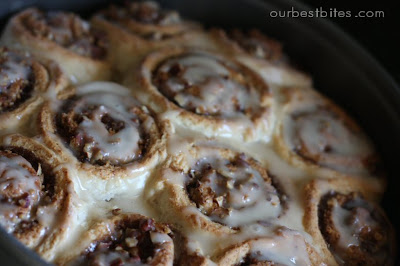 These are definitely best fresh out of the oven. We had some that sat out all day and they weren’t nearly as delicious. Check out these pictures, you’d never know these were made out of some weird cottage cheese mixture. 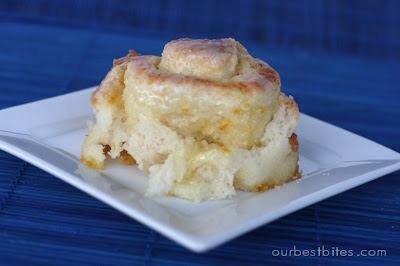 See how light and soft they are inside? 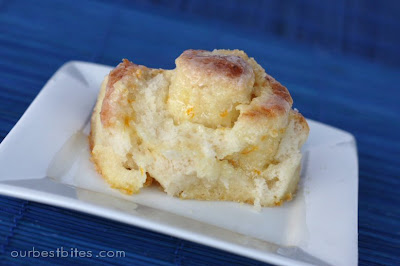 As delicious as these are, I don’t think they are a replacement for a normal sweet roll cooked with yeast. However, that’s because it would be like comparing oranges to tangerines. These are super yummy, quick and easy, and you have to give them a shot to see what I mean. I guarantee this dough will come in handy. I’m loving it for the morning hours when I don’t want to get up at the crack of dawn to allow normal rising time. Or for an event where I need something done at a very specific time. Or when I have a craving and need a cinnamon roll NOW not 2 hours from now!

I’d like to try it out in some of these too:

Eric here. One last thing. If you’ve ever wondered if Sara really is the young mother of two she claims to be and not some scary old man, some of you can finally know the answer. If you’re in Utah, tune into KSL’s Studio 5 this Thursday (Sept. 17th) to see Sara cooking up a storm. And let’s all pray her hand is functioning by then.