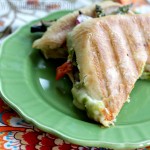 I promise, I’m almost done with talking about food and pregnancy. Literally–I am in the final weeks and while Sara is gone AGAIN this week (this time to New York) for work-related stuff, I’m at home thinking about my starving-yet-nothing-sounds-good-and-I-write-a-food-blog conundrum and she’s off in my favorite city in the world working super hard at the Book Expo America without me. If you want to stop by and see her (and have her sign a cookbook or two), here’s her info:

And so, all alone and large and swollen and hot, I wander the grocery store, picking up random things that have the potential to sound good. And don’t require a lot of time or dishes because neither one of those things are super interesting to me at the moment. Well, dishes are never super interesting, but they’re especially un-interesting right now.

And so we eat sandwiches. Lots of sandwiches. I also fed my kids Ramen for lunch the other day and you would have thought I wrote them each a check for $1 million.

Remember our Creamy Lime-Cilantro Dressing? The dressing legends are made of? Yeah, in a sudden 5-minute window of “Wow, that sounds good!”, I decided I wanted to make a veggie panini with my random grocery store pickings and that dressing as a sandwich spread. But, of course, I didn’t have the tomatillo salsa. I did, however, have a can of chipotle chilies and I had an idea that was either brilliant or blasphemous. Maybe a little of both. It was awesome.

Everything else stays the same (except buttermilk instead of regular milk–that’s another random grocery store find that sounded delicious)–mayo, cilantro, garlic, a packet of ranch dressing, and the juice of one lime. And then, instead of the tomatillo salsa, I used the adobo sauce from a can of chipotle chilies.

It was spicy, but not overwhelmingly so; that said, if you can find a can of adobo sauce without the chilies, the sauce won’t be nearly as spicy, so if you like the chipotle flavor without the heat, you could give that a shot.

Place the mayonnaise, buttermilk, lime juice, garlic cloves, and ranch in a blender.

Blend until smooth. Add a handful (about 1/2 cup) of roughly chopped cilantro…

and pulse until the desired texture is reached (some people prefer the cilantro almost completely blended and others like some leafiness…totally your call).

Transfer the dressing to a serving container and refrigerate for at least 30 minutes.

You can whip up the dressing a few days ahead of time.

Preheat oven to 450. Line a baking sheet with aluminum foil and set aside.

Wash 2 portobello mushroom caps, 1/2 a pound of asparagus, and a small red onion.

Slice the mushrooms into 1/2″ slices, snap off the tough ends of the asparagus, and slice the onion. Place on the baking sheet…

Drizzle the veggies with 2-3 tablespoons of extra-virgin olive oil and sprinkle with kosher salt and freshly ground black pepper. Toss to combine (you may need a little more oil on the mushrooms because they tend to soak it up). Roast for 15 minutes or until the veggies are tender (keep an eye on the asparagus because it’s the most temperamental of all the vegetables; when it’s tender-crisp, pull out the whole pan).

While the veggies are roasting, slice 4 ciabatta or focaccia rolls in half lengthise. Spread each side with the Chipotle-Lime Dressing. On the bottom half, place a slice of Provolone or pepper jack (if you want the spice). Spread the top half with guacamole and then top it with another slice of cheese. Place a few slices of roasted red bell pepper on each bottom half and then, when the veggies are done roasting, divide them evenly among the sandwich rolls.

Place the top on each sandwich…
Cook each sandwich in a panini press. If you don’t have a panini press, no worries–check out these awesome tips from Kathy at Panini Happy. When the sandwiches are nice and crispy, let them stand for 2-3 minutes and then slice the sandwiches and then serve immediately. This makes 4 large sandwiches and you will think, “I’m going to eat three bites of this half sandwich and then go lay on the couch like a beached sea creature,” and, instead, eat a whole sandwich because it’s the first thing that has tasted good in the last week. Not that I’m speaking from any kind of firsthand experience.

To prepare the dressing, place all the ingredients in a blender and blend until combined. Refrigerate for at least 30 minutes before serving.

Preheat oven to 450. Line a baking sheet with aluminum foil. Place washed and snapped asparagus, sliced portabellos, and sliced onion on the baking sheet. Drizzle with 2-3 tablespoons olive oil and sprinkle with kosher salt and freshly ground black pepper. Toss to evenly distribute the the oil and salt and pepper (you may need a little more on the mushrooms because they tend to absorb it). Roast for 15 minutes or until veggies are tender.

While the veggies are roasting, spread both sides of each piece of bread with the Creamy Lime-Chipotle Dressing. Place a slice of cheese on the bottom. Add 1/4 of the roasted red peppers.

Spread the top with guacamole and then place another slice of cheese on top of the guacamole.

When the veggies are done roasting, divide them among the sandwiches (on the bottom half). Top each sandwich and cook in a panini press (or on a skillet with a heated pan pressed on top of the sandwich). Allow to stand 2-3 minutes before cutting in half and serving. Makes 4 large sandwiches.