I know lots of people are scared of separating eggs, but it’s kind of like your kid choking on something or getting an epidural during labor–you just figure out what to do (well, hopefully you’re not doing your own epidural, but you’re just so darn grateful to get the drugs that you don’t mind asking for a giant needle in your spine) and then realize it wasn’t as bad as you thought it would be.

Some of you may wonder, “Why in the world would I want to separate my eggs?” Well, the yolks and whites have different properties; you want the whites for light and fluffy things like meringues and angel food cake, whereas the yolks are used in rich, thick things like custards, puddings, and ice creams. If I were more resourceful, I’d find a use for the part of the egg I’m not using, but I’m too lazy to do that. So the unused part usually goes down the garbage disposal.

There are fancy egg separaters out there, but I’ve never used one so I can’t even tell you if they work or not. This is how you can do it with your hands. The key to all of this is being gentle yet firm and confident–it takes one little misstep to ruin the egg-separating process (although you should definitely have a couple of extra eggs handy in case you mess up).

1. Crack the egg against a surface like the edge of a bowl or the corner of your countertops. The crack needs to be big enough so that you can get both thumbs in the crack but not so big that either half of the shell has been completely demolished; you need both halves.

2. Gently use your thumbs to pull the two halves of the shell apart. If you’re trying to preserve the yolk, go ahead and do this over the sink so the white runs out of the shell and into the sink. 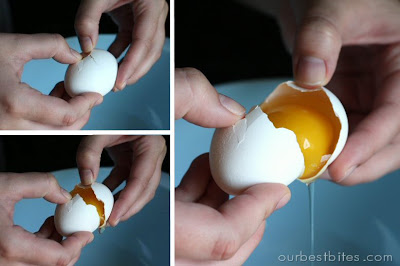 You need to be very careful because a very thin membrane surrounds the yolk and if it’s torn in any way, the yolk will leak out and you’ll probably need a new egg. Using very fresh eggs helps with this; the older the egg, the more the membrane has deteriorated. Make sure the yolk is completely in one of the shell halves.

3. Transfer the yolk back and forth between the shell halves as the white runs off. 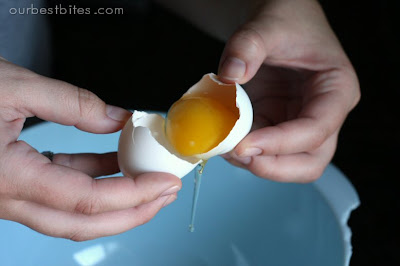 You can also just dump the whole egg into the palm of your hands and separate your fingers just slightly. Let the whites fall through and keep the yolk. 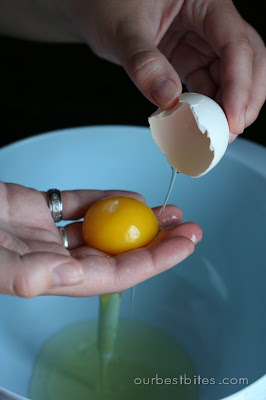 4. Either way, you will end up with a bowl full of egg whites or a naked little yolk! 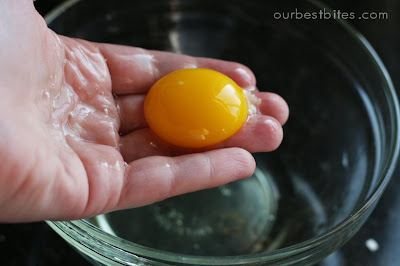 Oh, and with the yolks, it’s okay (and inevitable) that there will be a little egg white on it, but if you want the whites for beating (like for meringues, not like a red-headed stepchild), there absolutely can’t be any speck of yolk or the whites won’t fluff up when you beat them.