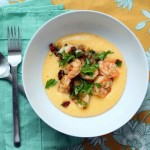 If your shrimp are already peeled and deveined, you can get started on the grits (otherwise, peel and devein the shrimp first). Grits kind of get a bad rap, but I think if you make them and serve them right, they’re delicious. Like, for instance, with butter and lots and lots of cheese:

Add the prepared shrimp to the hot bacon grease and stir them constantly until they’re just starting to turn pink (about 2 minutes):

When the grits are done cooking, add the butter and cheese and stir until smooth. Ladle the grits into shallow bowls, top with the shrimp mixture (you can also garnish it with a little extra parsley and green onions), and eat it immediately. It’s so pretty that you’ll want to serve it with the shrimp on top, but when you go to eat it, be sure to mix it all together. Unless you’re my husband, who kept passing off his shrimp to the kids when he thought I wasn’t watching (he’s hopeless).