I want to talk a little about picky eaters because this is something we’ve basically battled since my 5 1/2-year-old was 11 months old. It’s really, really hard for me to understand because aside from my food preferences and a few things I just don’t like, I’m really just not very picky and I never have been. I’ll tell you straight up that he doesn’t like olives, but because he is going to Kindergarten next week (and thus the one needing a packed lunch), he was the one on my mind when I was coming up with this recipe. But how do you come up with an olive-related lunch for a kid who doesn’t like olives?

I’m definitely not an expert on picky-ness in kids (believe me. Dinnertime can be a little stressful at our house.) But one thing I’ve really tried to do is introduce foods he’s not super crazy about with foods that I know he likes. I also try to make it easy for him to pick out what he doesn’t like so he knows that a) the world isn’t going to end if the thing he doesn’t love touches his other food and b) he has the option of not eating what he doesn’t like. However, if he doesn’t want something, he has to politely pick it out himself. It seems like, over the years, we’ve gotten him to end up eating a lot of foods he wouldn’t eat otherwise. I’m hoping it’s just a matter of time before he starts eating those olives because pretty soon, his little fingers are going to be too big to sport the olive fingernails that were pretty much a given at any family gathering with a relish tray when I was growing up.

ANYWAY. In this pasta salad, I took something he loved (cheese-filled tortellini), things he’s okay with in some circumstances (cucumbers and thin slices of red onion), and things he’s not super crazy about (olives and halved cherry tomatoes) 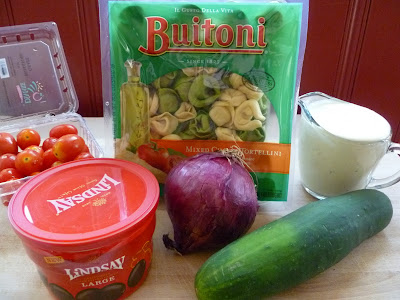 and tossed it in a flavorful (but not overwhelming) dressing. 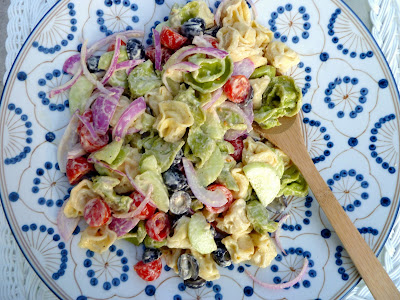 The verdict? He loved it. More specifically, he loved the tortellini, dressing, and cucumbers, and he even ate a few olives. And he asked for seconds. Which means it’s a total winner in my book. 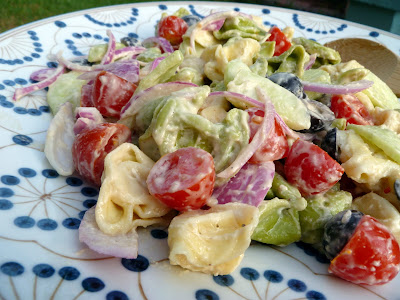 I figure with the pasta and veggies, this works as a light lunch, especially with some fruit on the side. You could also serve a smaller portion alongside a half sandwich or, when the weather cools down, with a small Thermos filled with soup.

Recipe by Our Best Bites
1 20-oz. package Mixed Cheese Tortellini
1/2 medium red onion, thinly sliced
1 pint cherry tomatoes, halved
1/2 medium cucumber, seeded and sliced
1 c. whole, large pitted black olives (like Lindsay Olives), halved
1 c. Ground Mustard and Garlic Vinaigrette
Cook the pasta according to package directions. Meanwhile, combine the onions, tomatoes, cucumber, and olives in a large salad bowl. When the pasta is done cooking, drain and rinse in cold water. When the pasta has cooled, toss it with the combined ingredients and then add the salad dressing and toss until combined. If possible, refrigerate for at least an hour before serving. Serves about 8.