Grilled corn on the cob is a staple at our house, especially when we have company over because it’s generally a crowd pleaser. People are constantly asking how exactly to do it, so I’m going to show you several methods and you can pick the one that “speaks” to you! Whatever method you choose, you’ll get yummy, perfect corn that has an extra punch of flavor from roasting on the grill. I hope after this you’ll never boil a giant pot of water again!

No matter which method you choose, if you’ve got the time, soak your corn first for at least 30 minutes. (This is imperative if you’re grilling with the husk on or that sucker will toast right up) With the other 2 methods, it will keep them plump and tender. 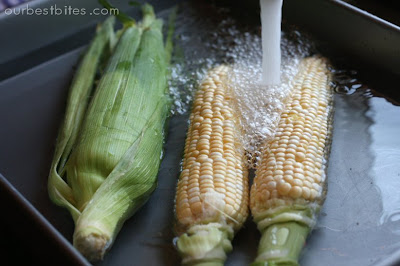 See that end stump that you normally cut off? When I’m grilling corn I always leave them on. It creates a nice handle to turn and also makes those little corn holder things unnecessary when serving. My kids love to hold on to it like a popsicle. 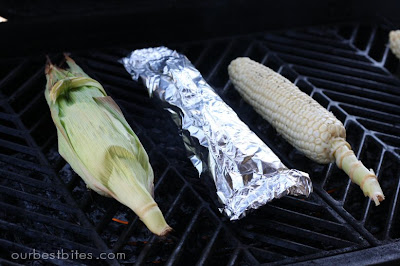 If you have an upper rack on your grill, use it. While your meat is cooking below, the corn can cook happily up top and you won’t have to be so vigilant about keeping an eye on it. 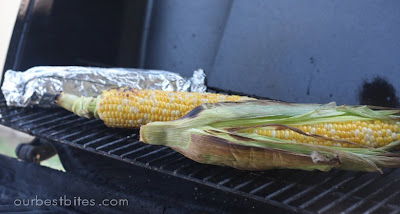 Okay, here we go- our three favorite ways to grill corn on the cob.BBQ Grilled Corn: In Foil
This is probably the safest, easiest method if you’re new to the whole corn-grilling thing. It consistently gives you juicy, tender corn kernels and it’s easy to customize the flavors since you pop them right in your little packet. 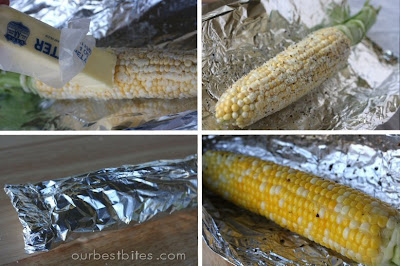 1. Lay the clean corn cob on a piece of heavy duty foil. If you don’t have heavy duty, make sure to layer a few sheets of normal foil together or you run the risk of burning the corn.

2. Rub butter {real butter! always!} all over the surface of the corn cob. Sprinkle with salt and pepper. You can add in any seasonings or fresh herbs you like at this point. Be creative. Kate even throws onion slices in hers sometimes.

3. Securely seal the foil on both ends and the top. You will rotate the corn so you want to make sure it’s sealed up tight so the butter doesn’t leak out.

4. Place on preheated grill and rotate every 5-10 minutes for about 15-20 minutes. Be careful when opening. It’s steamy and hot!

BBQ Grilled Corn: Directly on the Grill
This is what I do the majority of the time. I love the caramelized kernels (both the look and the taste) and the smokey flavor it picks up from the grill. You do however need to be careful because you can burn and dry out easily. Use an upper rack if you have one, and turn often. Don’t overcook, or you’ll end up with dry, chewy corn. And that’s not yummy at all. 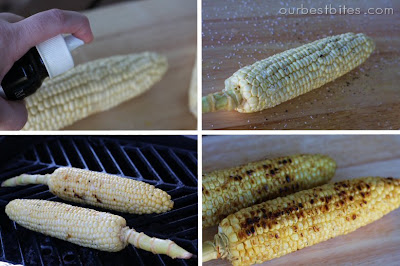 1. Lightly brush (or spray) olive oil over clean corn cobs. Use your hands to make sure it’s well coated.

3. Place directly on the grill with medium heat and turn often. The kernels will brighten in color and then caramelize. When you see golden brown spots, it’s probably done. It usually takes only about 10 minutes. 15 if you’re on a lower heat or upper rack.

4. To avoid burning corn, place it on an upper rack if you have one.

BBQ Grilled Corn: In the Husk

This is the method I use least often. It’s kind of a pain to do the whole silk-removal and re-husking thing, but the bonus is that the husks keep in moisture so you get a pretty juicy cob, and since it’s right on the grill you sill get some of that smokey flavor as well. Plus, it looks super cool 🙂 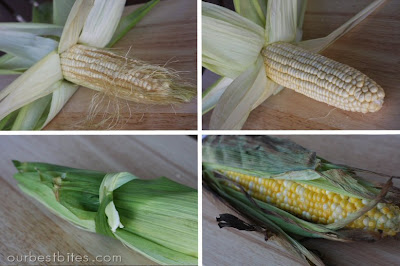 1. Carefully pull down the outer corn husks (the green part) leaving them attached to the corn cob.

2. Remove the stringy silk and then carefully place the husks back up onto the corn cob.

3. If you like, use a longer piece of husk to secure the rest of the husks to the cob.

*Make sure to soak your corn for at least 30 minutes in cool water before proceeding to the next step.

4. Place directly on grill (again, upper rack works well to avoid burning, or place it on the outer edge of the grill where it’s not so hot)

5. Turn every few minutes until corn kernels brighten in color and appear plump. Takes about 15 minutes. When it’s done, slather on the butter and salt.

**After reading lots of comments from readers, apparently removing the silk isn’t necessary, so feel free to skip that step if you’d rather peel it off after cooking instead.

Try any of these methods in Grill Roasted Salsa. Or if we’ve got you in the mood for veggie grilling now, you’ll probably also like this Garlic Balsamic Asparagus.