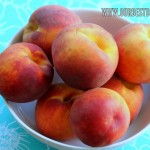 I should really call this “Tutorial: How to Peel Peaches/Nectarines/Other Stone Fruits. Also, Tomatoes,” that just seemed like it wasn’t long enough, you know? So the Mighty Peach gets to be the mascot for this tutorial.

You might be saying, “Hey, Kate, it’s called a paring knife and a tiny bit of elbow grease–do we really need a tutorial?” If I’m just going to peel one peach, I’ll do it with a little knife (and inevitably cut myself in the process because that is what  I do). Actually, who am I kidding? I can’t even remember the last time I peeled a single peach–I’ll either eat it with the skin on or let it go bad because I hate peeling peaches that badly.

However, if you hate peeling peaches as much as I do and you’re willing to wait a few minutes, this a quick, easy, and fun way to peel peaches.

A large pot of water (with an in-basket strainer if you have one),

and a bowl of ice water. But we’ll get to the ice water later. In, like, two seconds.

and add them to the boiling water. Boil them for 30 seconds, drain them, and then immediately plunge them into the bowl of ice water.

When the peaches are cool enough to handle, gently rub the skin and it will peel right off. Is it weird for me to compare it to a peeling sunburn? Because that’s what it’s like.

Those are the hands of my lovely assistant/babysitter/Diet Coke-bringer extraordinaire. I told her that I would Photoshop beautiful nails onto fingers, but what she doesn’t know is that I don’t have the foggiest clue how to go about Photoshopping beautiful fingernails onto her nails. Sorry, Laura-Dude.

In a matter of seconds, you’ll have a big pile of peeled peaches begging to be eaten. Like in, say, the recipe I’m going to post on Friday…

How to Peel Peaches*
Tutorial by Our Best Bites

Wash peaches and set aside. Bring a large pot of water to a boil. When the water is almost boiling, fill a large bowl with ice cubes and then with water. Add the peaches to the boiling water and boil for 30 seconds. Drain the peaches and immediately plunge them into the bowl of ice water. When the peaches are cool enough to handle, gently rub off the skin and use as desired.

*This method can also be used to peel tomatoes as well as other stone fruits like apricots, nectarines, and plums.