So I had something else planned for today, but on Saturday night, I posted a picture of my trip to Target when I was shopping for my baby girl who’s turning 10 today and got a huge response–tons of questions and emails and requests for a gift guide. It’s funny because I was having such a hard time knowing what to get her–she’s kind of moving beyond toys and little girl things, but she’s not quite to the teenage stuff. But once I started shopping, it was easy. 10 is old enough to want things that are a little “older” but  little enough that I don’t need to get her the fancy brands and she’ll still be excited, so I can get away with cheap nail polish and makeup.

As always, I’m sure there are going to be lots of opinions of my shortcomings as a mother–spending too much money, not spending enough money, me buying her “makeup,” the fact that she’s seen Wonder Woman (twice) or that she’s obsessed with Hamilton or that I got her candy with artificial colors and that it was all purchased at a big box store instead of Etsy or a local boutique. I know. You’re disappointed. You expect more from me. It’s cool, we’re 4 weeks into summer vacation and I’m basically just hoping my kids don’t wind up being serial killers right now. 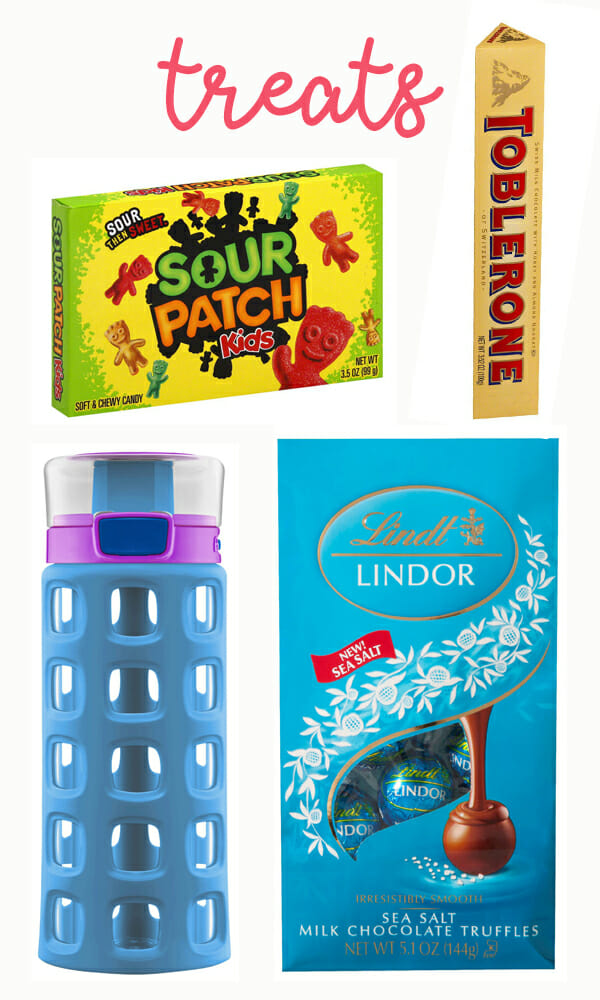 Yeah, water bottle isn’t really a treat, but it (kind of) fits into the consumables category. She’s always asking for her own water bottle that’s only hers and I always resist because I feel like it’s going to wind up under her bed and we’ll find it when she leaves for college, but these Olio Water Bottles were on sale and I snagged her one. As far as the other treats go, I went for little kid friendly (Sour Patch Kids), plus some of my favorite more grown up treats (Lindor Sea Salt Truffles and a Toblerone Bar.) 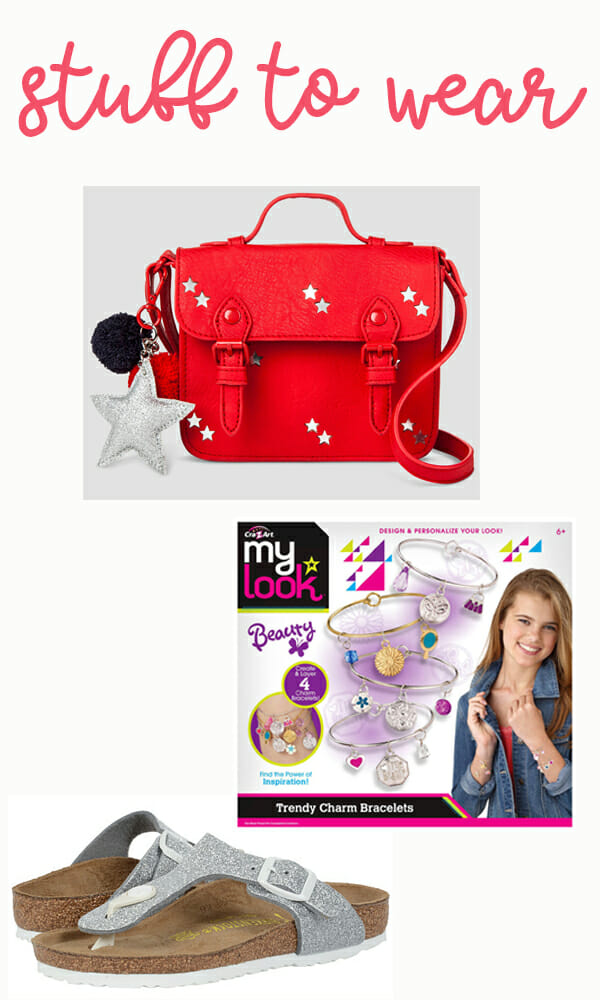 She’s also been asking for this CraZ Art Trendy Charm Bracelets kit for the longest time and I finally gave in. It’s something she can wear, plus something to keep her busy during this very, very long break from school. I also got her this red Cat & Jack purse from Target and these sparkly Birkenstocks, which is her big gift this year. 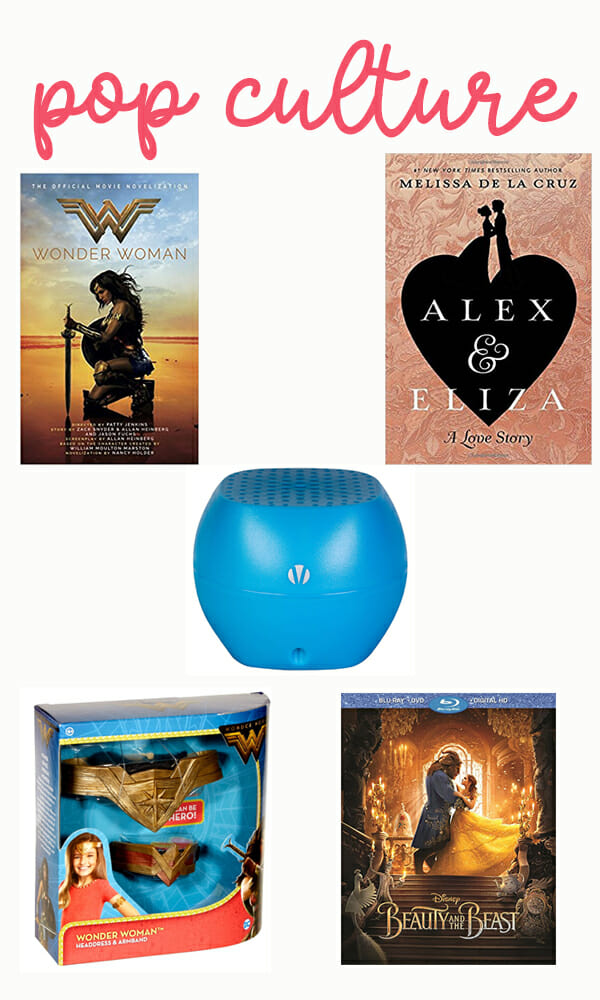 In the last year, her tastes have really shifted from little girl (Wonder Woman dress-ups and Beauty and the Beast) to tween (cheap wireless speaker, the Wonder Woman novelization, and a young adult historical fiction about the Alexander Hamilton/Eliza Schuyler love story–she’s a young, scrappy, and hungry reader, so I think it’ll be her thing in spite of the fact that she thinks love stories are gross.) 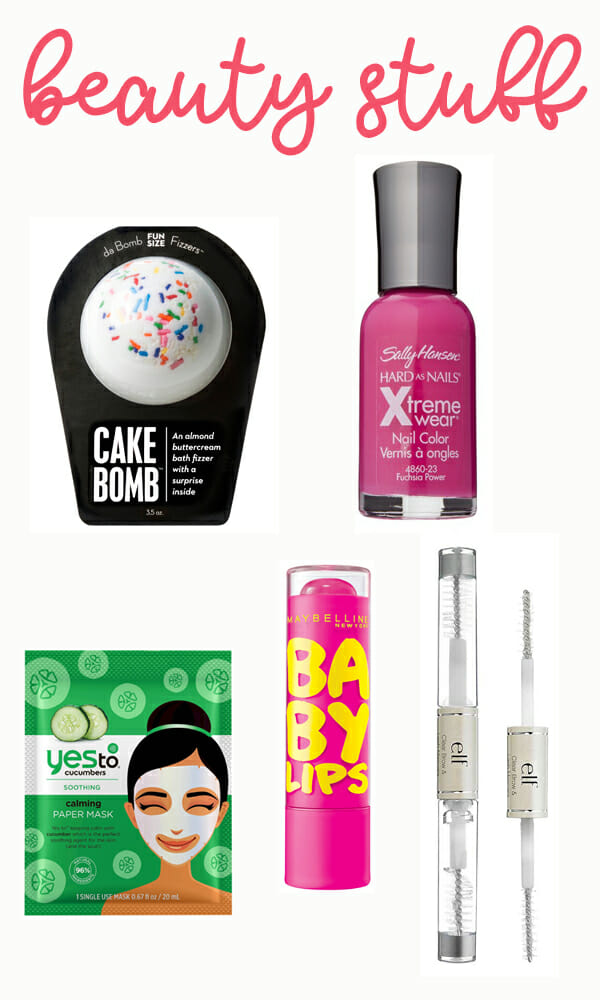 For me, this was the most fun and the easiest to buy. I got her this cute little Cake Bomb bath bomb, some clear mascara (which I got in my Easter basket when I was about her age and I remember feeling very grown up), Maybelline Baby Lips (which I like because it’s like a lip balm with just a hint of color, nothing too mature), a paper face mask (so we don’t have to deal with the mess of a mud mask), and her own inexpensive nail polish (plus a clear and a glittery topcoat so she can finish it off however she wants to.)

I know a lot of you said that you also had a daughter about the same age and were looking for gift ideas, so I hope this helped! Have a happy Monday!