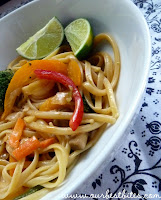 One of the saddest parts for me of moving to Louisiana was leaving behind all my favorite restaurants and foods I’d come to love. One of my favorite places was Noodles & Company. I’m sure you guys are the same as me–there are times in my life that I look back at with such fondness and such happy memories that it almost hurts. The summer of 2006 was that way for me and it seems like in my memories, I was always at Noodles & Company–with my sister before she moved to Alabama, with my then-two-year-old son on a rainy, rainy day after story time at the library, the night I found out I was pregnant with my daughter (and, subsequently, 9 months later on the night before I had her). My favorite thing to eat there (besides the Macaroni and Cheese which had about a million calories and as many grams of fat, so I’d order a small portion for my son and snack off his plate) was the Bangkok Curry. It was light, healthy, full of veggies, and unbelievably delicious. At the restaurant, there’s the option of adding grilled chicken or shrimp, but I always just went the vegetarian route.

Well, when we moved here, not only was there no Noodles & Company, but there was nothing even similar. And there were none close by. Not even in Texas. I tried to re-create it at home and failed. I scoured the internet for copycat recipes and came up with nothing. I resigned myself to a sad, Bangkok Curry-less existence. And then…a few months ago…I Googled it again for the heck of it and found not a copycat recipe but a recipe from Noodles & Company themselves! I went on a mad hunt for ingredients and tried making it that night. And, to be honest, it kind of flopped. The rice noodles were great in theory, but they only made things messier and more complicated than they needed to be. This sweet chili sauce 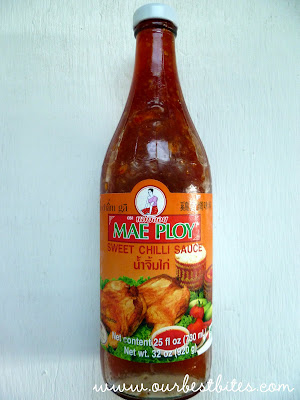 (which I had a heck of a time finding–I’ll warn you now to forgo the grocery store altogether on this one, head to a specialty or Asian foods market, and ask someone where to find the sweet chili sauce. It’ll save you some road rage and mean thoughts if you do!) was way spicier than I was anticipating and the amount called for in the recipe made mine inedible. There also weren’t enough veggies and blanching fresh broccoli and carrots, along with soaking the rice noodles and using the wok, completely destroyed my kitchen. So I tweaked, streamlined, and simplified. And the next go-around was awesome. Just like I’d been dreaming for 2 1/2 years. 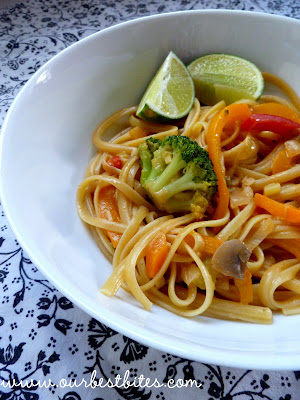 Aside from the sweet chili sauce, you should be able to find everything else at your average grocery store: 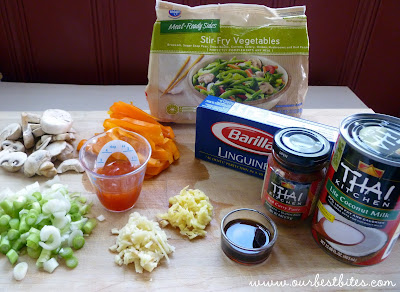 Linguine (be sure to buy the 16-oz. package and not the 12-oz. package), green onions, fresh ginger, fresh garlic, mushrooms, frozen (gasp!) veggies, red bell peppers, curry paste, and coconut milk. I sometimes get a little bewildered at the grocery store when recipes call for curry paste–what kind of curry? Indian? Thai? Green? Red? Powder? Paste? Sauce? Yeah, you get the picture. In this recipe, I used Thai Kitchen red curry paste, although you could totally use their green curry paste, too. It’s inexpensive and super easy to find. Problem solved, right?
Then you just cook the pasta, stir-fry the veggies, whisk together the sauce, and toss it all together! Super quick and easy–30 minutes, tops. If you want to add chicken or shrimp, just pop some on the grill, seasoned however you like them, and then slice the chicken before serving and add it to the noodles. Garnish with a sprinkling of black (or white, if you can’t find black) sesame seeds and a few limes for squeezing over the noodles before eating. 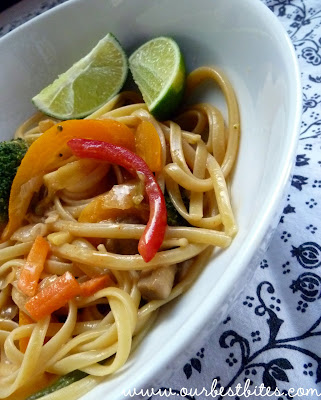 Heaven. In a bowl.
I will say that this recipe makes a ton and I would totally cut it in half except for the fact that I have very few uses for 1/2 of a can of coconut milk. Leftoverville, here we come. However, our reader Debs had a fabulous suggestion to freeze half of the coconut milk, which means you’d use a little more than 3/4 c. of coconut milk.
Veggies and Noodles with Thai Coconut Curry Sauce {aka Kate’s Noodles & Company Bangkok Curry Semi-Knockoff}
Inspired by  The Colorado Connection
Ingredients:
1 lb. linguine or rice noodles (if using rice noodles, soak in hot water for about 1/2 hour and then drain and rinse)
1 12-oz. package of frozen stir fry vegetables or 6 oz. frozen broccoli and 6 oz. frozen julienned carrots
1/2 c. green onions
1 medium red, orange, or yellow pepper, thinly sliced
1 c. sliced mushrooms (about 6-8 small mushrooms)
1 Tbsp. fresh, minced ginger
1 Tbsp. fresh, minced garlic
1 Tbsp. curry paste
Juice of 1 lime, plus more limes for garnish
2-3 Tbsp. vegetable oil
1 13.5 ounce can of lite coconut milk
2 Tbsp. soy sauce
4 Tbsp. sweet chili sauce (available at Asian markets)
kosher salt and black pepper
Black or white sesame seeds for garnish
Instructions:
Cook pasta according to the package directions. In a small mixing bowl, whisk together the coconut milk, soy sauce, sweet chili sauce, curry paste, and lime juice. While the pasta is cooking, microwave the frozen vegetables according to the package directions, but only cook them for 1/2 the time–you still want them to be quite crunchy. If you’re using fresh veggies, blanch them in boiling water for 1-2 minutes or until they’re tender-crisp.
In a large non-stick skillet or wok, heat the oil over medium-high heat. Add the green onions, mushrooms, ginger, garlic and red peppers and cook until the mushrooms are tender and the garlic is fragrant, about 3 minutes. Be sure to continue stirring constantly to prevent the garlic from burning.
Add the the half-cooked (formerly frozen) vegetables. Stir fry for about 1 minute and then add the coconut milk mixture and cook until it begins to boil. Remove from heat and add the cooked noodles. Toss to combine and then allow the mixture to stand for 5 minutes. Toss again, season with salt and pepper to taste and serve with a sprinkling of sesame seeds and 2 lime wedges per person (squeeze the lime juice over the noodles before eating). Serves 8 very generously, so if you can find an extra use for the other half of that can of coconut milk, I say go for it…