If you missed the previous posts in this series, start here, and then move here, and then land here where you are right now.  This is the 3rd and final post in this series and then you’ll have our whole itinerary, as many of you requested!  I promise to get back to delicious food after this.  I have something crazy good coming up.  As a reminder, here’s our route!  We took 13 days to drive this trip up the East Coast. 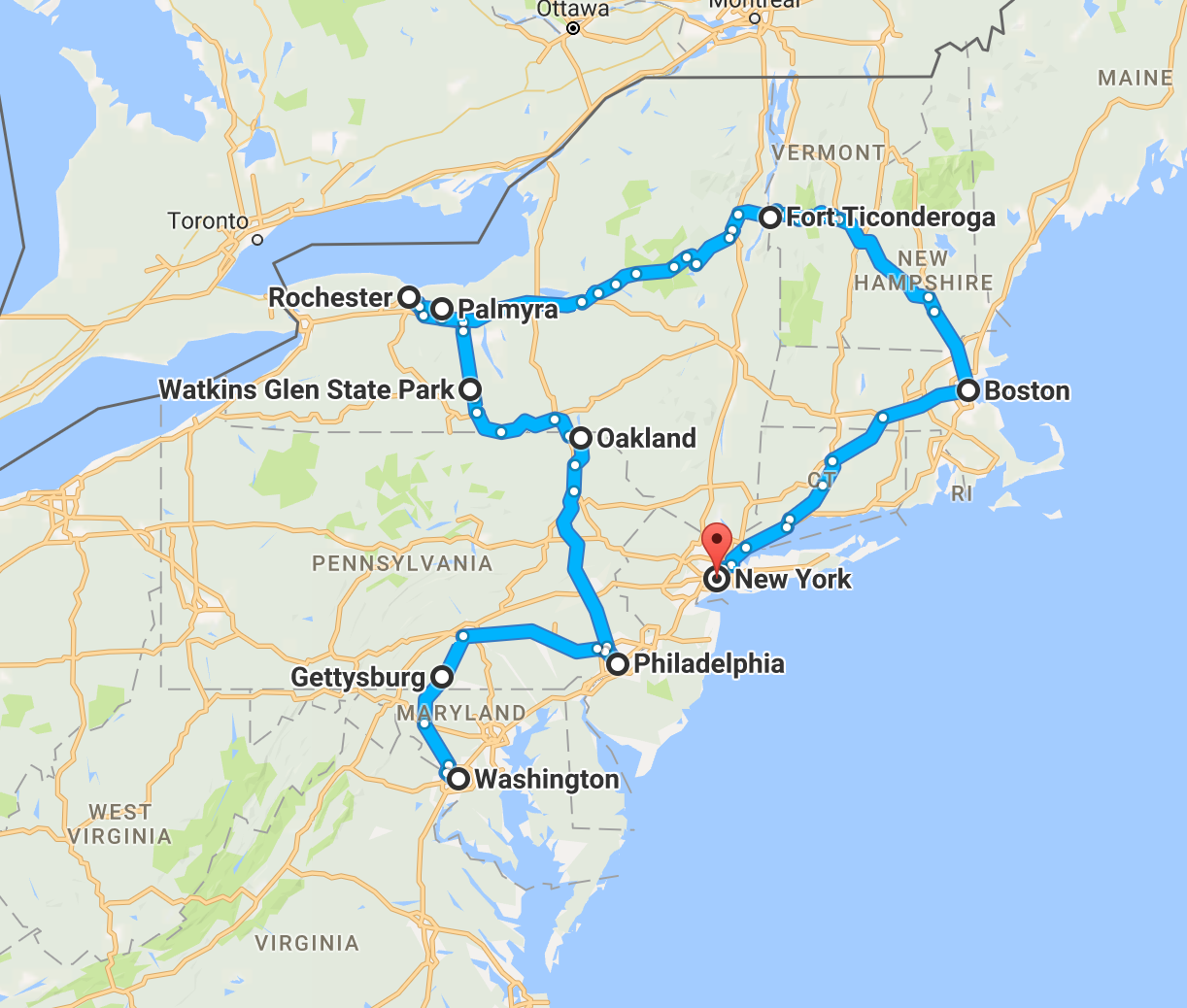 We left off in the last post in the beautiful Watkins Glen State Park.  From there we hopped back in the car and headed to Rochester New York where we would stay a couple days and visit the city of Palmyra, listed below.

If you’re not a member of the LDS/Mormon faith, Palmyra most likely doesn’t ring any bells for you.  This is one of the most significant places in our church history, and a place where many of my ancestors came from.

There are several visitor centers there, which are beautifully designed and really neat to explore whether you are a member of the LDS church or not.  We visited the Grandin Print Shop, The Smith Family Farm, The Sacred Grove, the Peter Whitmer Farm, and The Hill Cumorah.

One of my favorite things about this area were all of the roadside dairies that served the BEST ice cream!  Speaking of food, SO many people recommended we check out Dinosaur BBQ.  We didn’t end up going there, but from what it sounds like, if you’re in the area, that is a great place to check out!

TIP: If you’re all the way up here, Niagra Falls is not far!  We couldn’t squeeze in one more stop, but that’s definitely something to consider.

LODGING:  We stayed at The Residence Inn in Rochester.  I loved having a kitchen so we could stock up on snacks and eat some quick meals in the room.  I also needed and used the laundry room there which was right across from our room.  We left with EVERYTHING washed and clean and that was awesome.

FOOD:  Everyone kept telling me I needed to visit a Wegman’s Grocery store and I thought it was strange that a grocery store was on the top of people’s lists??  We finally stopped by the one in Rochester and then I got it!  It was amazing and I loved it, haha.

Fort Ticonderoga sits in the Adirondack region right on Lake Champlain and it’s an absolutely gorgeous area.  This stop is one that my kids consistently mention as one of their favorite places when people ask what their favorites were.  I wrote about it in this post, so I won’t spend too much time on it, but it was super awesome.  The fort itself is so much bigger than I expected and has a ton of stuff to do.  Plus they have THE most beautiful cannons I’ve ever seen in my life!  If you want to read more detail about our experience here, just click here.

Our stop in Sharon Vermont was a super quick one. There’s just a little LDS church history site, and it was conveniently located on the way from Fort Ticonderoga to Boston.  It was a nice way for us to break up the drive.  I don’t even think I have a photo from this stop!  If you’re in this area, you’re not far from Ben and Jerry’s either.  Something to keep in mind 🙂

We arrived in Boston on the same day as the heat wave.  It was also the day of their Pride Parade so the city was packed!  It was miserably hot, which was disappointing since we were walking the Freedom Trail.  But we stocked up on water bottles and those frozen Italian Ice things that are all over Boston and hit the streets anyway.  The Freedom Trail is awesome because you can go at your own pace and skim past some stops or stay longer at others.  We stopped to eat at Faneuil Hall, which is basically the largest food court you’ve ever seen.  After a little more walking, the heat was unbearable so we veered off to the Aquarium to spend some time in the air conditioning!  A LOT of other people had the same idea so the lines to get in were crazy long.  TIP:  This applies to anywhere with long lines.  If you’re standing in a huge line, hop on your phone and see if you can just purchase tickets online.  We did this and in a matter of minutes, we bypassed the line and were staring at sea turtles. We live in a city without an awesome aquarium so this was a lot of fun for our kids.

The next day we hit up the USS Constitution, which my kids absolutely loved.  And then we hopped back on the road and headed to the finale…The Big Apple.

We had 2 1/2 days in New York City.  There is SO much to do in NYC, and my personal itinerary would change depending on if I was there on a girls trip, with my husband, or with my 4 kids.  “Big” things we did: The Statue of Liberty, Ground Zero Memorial and Museum, Central Park and Central Park Zoo, The Museum of Natural History (from Night at the Museum!), Times Square, Rockefeller Center, Chelsea Market. Things we skipped:  Broadway shows (no desire to drag kids there) The Empire State Building (crazy expensive and though I’ve done it, I didn’t feel it was worth it to pay that much for my little kids who probably wouldn’t appreciate it.)

Definitely take the boat to the Statue of Liberty, and if you have time, stop at Ellis Island.  The Ellis Island Museum is fascinating, but you can also choose to stay on the boat and skip it if your crew is out of steam or you are out of time.

Another must-see is the 9/11 Memorial.  The brand new museum is breathtaking.  It was full of hundreds of people, yet you could hear a pin drop.  There was a moving, unspoken reverence.  It is divided into different areas, and there are some where no photos are allowed.  There are also areas that have warnings for graphic material so if you want to avoid small children seeing anything to disturbing you can.  We talked to our kids about the events of that day and reminded them about what they would see and experience there and that made it much more meaningful.  I was so glad they got to experience it and I hope it’s something they remember.

TIP:  When planning your daily itinerary, grab a map of New York and divide your time into Uptown, Downtown, and Midtown.  Group things together in the same area so you’re not wasting time going back and forth.

TRANSPORTATION:  One of big questions I got was one of MY biggest concerns at first.  How on earth do we get around with this crew?  When I went by myself, I took cabs or uber everywhere but that didn’t seem super doable with a family of 6 on an uncertain schedule.  I asked Kelsey Nixon, a former New York dweller for advice and she gave some great ideas and then suggested we try the subway.  I didn’t even consider the subway at first because it seemed scary and complicated and in the movies, that’s where Bruce Willis always gets chased and someone gets murdered.  But in the end, we tried it out and it was fantastic.  The system isn’t hard to figure out and it was super affordable.  We were able to hop on and off as we pleased and the kids thought it was awesome.

TIP:  Instead of the Empire State Building, you might consider Top of the Rock. About the same price, but uptown and often less crowded.  Still an amazing view.

LODGING: One of the highlights, not just of this city, but of the whole trip for my kids was staying at the Marriott Marquis, the only hotel in the heart of Times Square.  And it is literally THE center of Times Square.  I stayed there once before on a business trip and I knew there was nothing else like it.  It was the most expensive place we stayed on the entire trip, but was a fun splurge.  38 floors up, where basically the huge windows were a 24-7 light show.  My kids were MESMERIZED.  It can get a a little sketchy, with the crazy crowd that tends to gather in Times Square, but we talked to our kids ahead of time and told them they might see some things and hear some words that were inappropriate (in New York in general, but especially in Times Square).  We had a little code and a few times we made them stare in random store windows as we walked by things like women making their living parading around in nothing but body paint.  Memories!  If you’ve never been to Times Square it literally never shuts down.  Completely crowded with lights and people and energy 24 hours a day.  I took my kids down to go outside in the street super past their bedtimes and they all thought that was so much fun.

FOOD:  Click here to get TONS of our reader-recommendations on food in NY.

One of our favorites was Black Tap, where we got the famous crazy milkshakes.  I got a great tip from Debi Lily, who told me to skip the main location, which often has lines down the street, and hit up the one in the Meatpacking District.  Sure enough we got right in with no wait, it was perfect!

I also made a special trip to grab famous Levain Bakery Cookies and they were totally worth it.  Another favorite of mine is Magnolia Bakery, where I never miss a chance to grab banana pudding. And if you’re in Times Square, I love the cheesecake and pastrami at Juniors.   REALLY wanted to make it to Katz’s but that didn’t happen this trip!  We flew out of New York back to Boise Idaho, and that was a vacation for the books!

Phew!  I’m sure I forgot a few things, but you get the gist.  If you have any questions, definitely let me know and I’ll do my best to answer them.  Thanks for following along on our trip!  Remember you can read the rest here, and here.