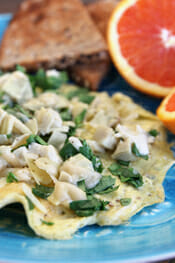 It’s no secret that eggs are a go-to ingredient for quick fix meals in my house.  I’ve shared some of my favorites like, Huevos Rancheros, Eggs on Toast with Creamy Spinach Sauce, Egg-Stuffed Baked Potatoes, and many more.  Omelets are especially great because you can really clean out the fridge and toss anything in there.  I’ve always enjoyed a good egg dish, but really fell in love with omelets when I headed off to spend a year and a half in Brazil, to do missionary work for my church.  I went straight from my cozy home in Seattle to the huge metropolis of Sao Paulo for 9 weeks of intensive language training before heading to my final destination in Curitiba, Brazil.  We ate in the cafeteria in the training center and were not only immersed in Brazilian language and culture, but in the food as well, which was just as foreign to me as everything else.  As a food lover, I adapted quickly and found I really enjoyed most of the cuisine (to this day I can’t go more than a few days without rice and beans!) but the rule was if there was ever anything you didn’t want to eat, you always had the option of asking the cooks for an omelet.  That was one of the first Portuguese words everyone learned, and I found myself asking for omelets on a regular basis, not because of any aversion to the other food being served, but because they were so dang good.  I’m sure it had something to do with the fact that they were ladled in copious amounts of butter and filled with ridiculous amounts of cheese.  My friends and I would eat them with the soft, fresh rolls served with every dinner, kind of like a cheesy egg sandwich, and there was something incredibly comforting about it.  I was far from home, away from my family, and suddenly completely immersed in a new country where nothing was familiar.  Yet something about a hot, cheesy omelet wrapped up in a fresh piece of bread made me feel like I was right back home in my momma’s kitchen.  That’s how a good omelet really turned into to genuine comfort food for me.

For this version, I wanted it to be healthy (this is under 200 cals!), but draw on all of the flavors of a ooey-gooey cheesy spinach artichoke dip. 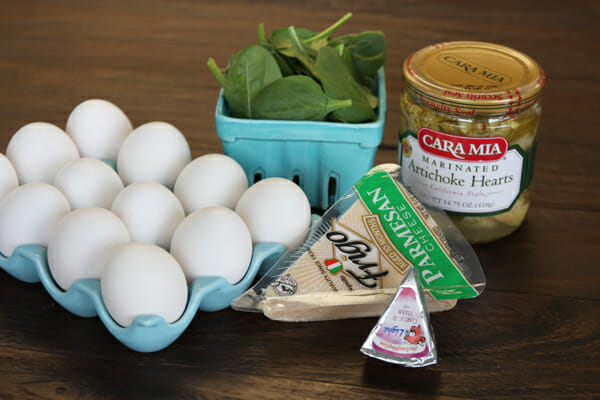 You just need a few little artichoke hearts.  If you’re like me and keep a jar in the fridge to use up on stuff like this, and salads, etc. then you’re good to go.  If you’re thinking, “Crap Sara, seriously you want me to buy a whole jar of artichoke hearts to make a stinking omelet??”  Then no fear.  Just plan to make something that calls for the whole jar (or part of a whole jar) and you’ll never miss 3.  I promise.  Need some ideas?  Try these: 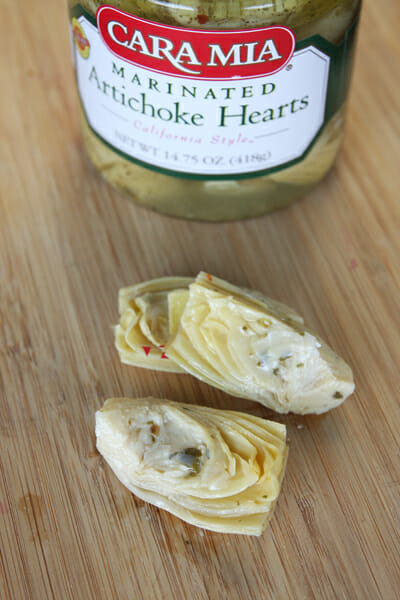 Here’s something else I almost always have in the fridge: Laughing Cow cheese.  It’s my secret (not so much a secret anymore) to super creamy, flavorful, scrambled eggs- as well as the omelet we’re making today.  Cream cheese kind of has the same effect, and you could use some low-fat cream cheese (regular or garlic-chive) in this recipe, but I really love these little wedges of Laughing Cow.  The “light” ones have just 35 calories per portioned wedge.  And admit it; buying cheese in a round is sort of fun.  The cheese sort of just melts into eggs and you get little pockets of creamy melted cheese.  Way more melty-cheesy-goodness than you would for 35 calories of say, grated cheddar.  It’s awesome. 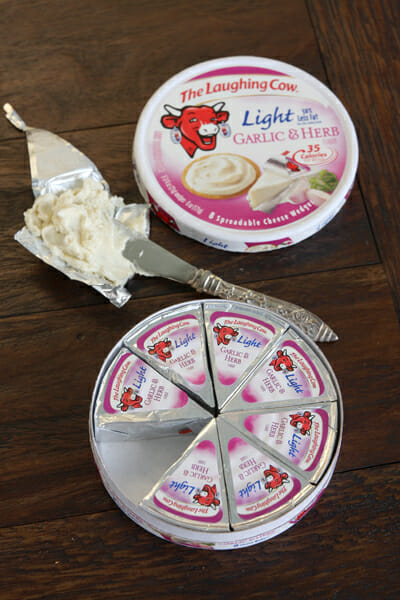 Since your omelet will cook super fast, it’s good to have everything ready.  We’ve got all of the flavor components of a good spinach-artichoke dip here.  A little chopped spinach, the artichoke, creaminess from the laughing cow cheese, and sharp flavor from just a touch of Parmesan. 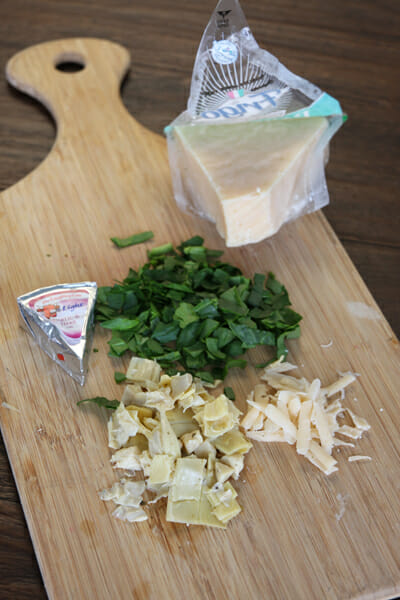 Start by cracking your eggs in a small bowl.  I know people like Bob Harper will tell you to make omelets with all egg whites, but I have to say I’m not a fan.  I use a combination of one egg and 2-3 egg whites.  That way you get the texture, richness and flavor from the yolk, but a drop in calories and bump in protein from extra whites.  Give that a sprinkle of salt and pepper and a little pinch of garlic powder.  I also usually add a tiny bit of water. 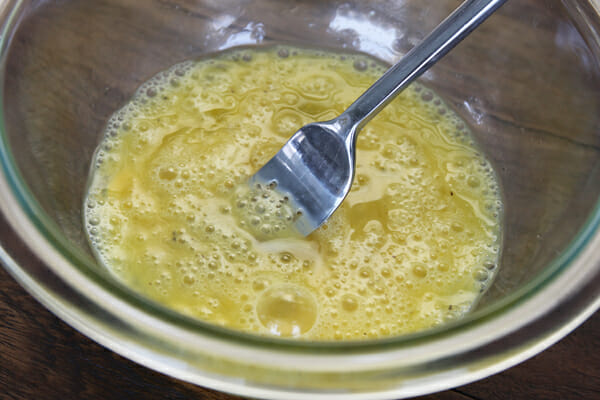 Now if you’ve never mastered the omelet, here’s my tips.  First, start with a smaller pan- I’m making an omelet for one here so I’m using an 8″ nonstick pan.  Heat it to medium heat (water should bubble up when it hits it) before you add those eggs.  If I wasn’t counting calories and aiming to make this light, a great omelet starts with a hunk of melted butter swirled to coat the bottom of the pan.  But alas, today a quick spray of olive oil will do the trick.  Pour in your eggs and they should immediately start to set (but not brown)  turn down your heat if they’re sizzling too much.  Immediately take a rubber spatula and gently scrape from the outside edge, in, letting the uncooked egg run onto the area of hot, open pan.  Does that make sense?  You’ll want to rotate your pan and do that several times around the entire pan until there’s not a lot of egg “running” around anywhere. 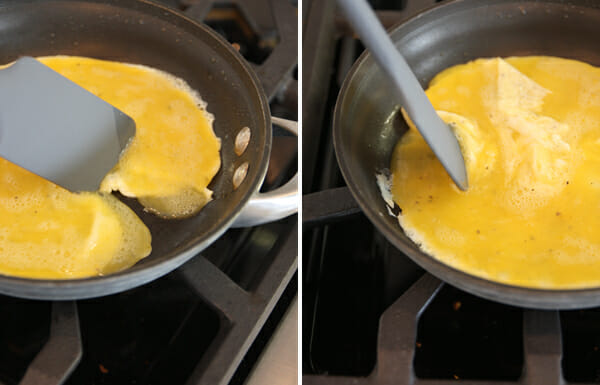 At this point, I often pop a lid on the pan, just for a quick moment, to trap some steam in there and help set the top so it’s not gooey.  You just want to be careful to not overdo it either.  Keep in mind, the top will look glossy even when set so you might want to touch it to see how done it is.  Just before it’s set, dollop the cheese on like you see below.  It’s really soft, so you just want to kind of drop little clumps on top.  Sprinkle on the spinach, the artichokes, and the Parmesan cheese.  Give it a little sprinkle of salt and pepper, too.  At this point I usually put that lid back on and remove the pan from heat and let everything melt together. 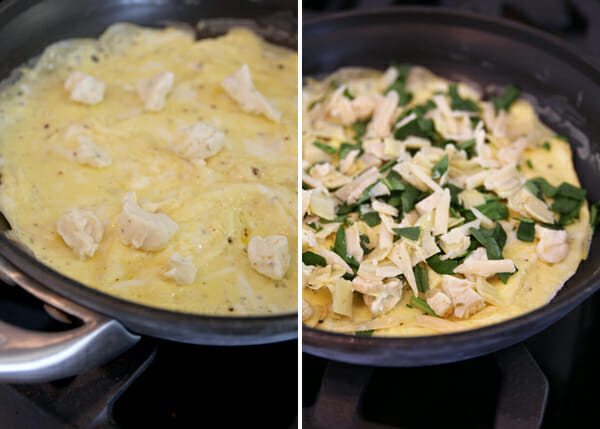 If all else fails, and the top of your omelet doesn’t set before the bottom is overdone, you can always pop it under the broiler really quick.

Use a spatula to gently release the omelet from the pan and slide it onto a plate, either open faced or folded.

You get tangy, flavorful artichoke hearts, slightly wilted spinach, the punch from the Parmesan, and pockets of creamy cheese. 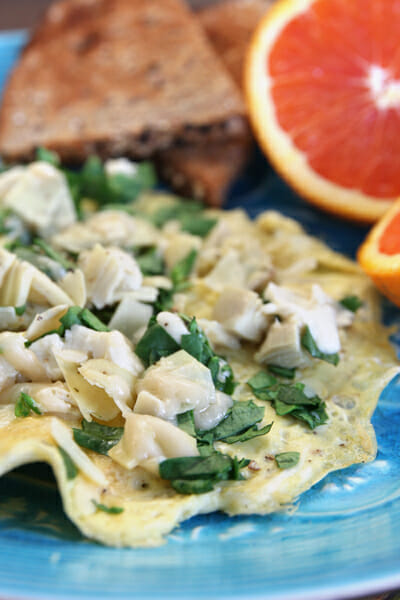 It’s so reasonable calorie-wise, ringing in under 200 calories, that you can still add a half and orange and a slice of whole grain toast and have a really filling meal. 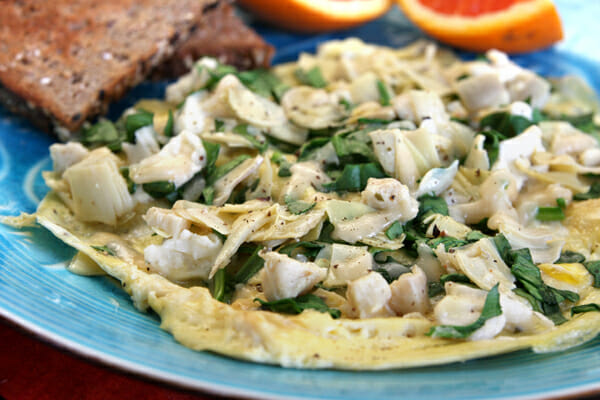 It’s so decadent, you’ll never feel like you’re eating healthy.  Just another example of how good-for-you food doesn’t have to lack in flavor or appeal! 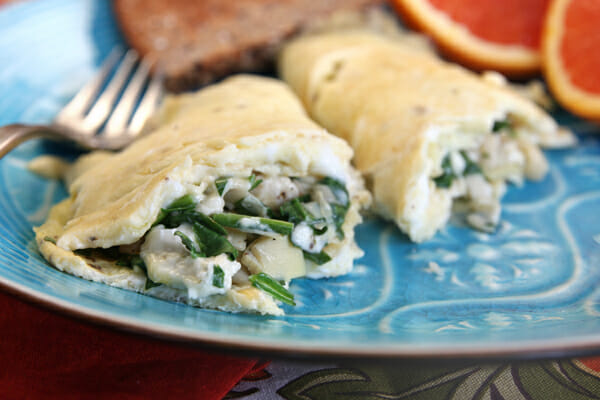 Instructions
Heat an 8-inch nonstick frying pan to medium heat.  Whisk together egg, egg whites, and water, and add a sprinkle of salt, a few cracks of pepper, and a pinch of garlic powder.

Spray pan with nonstick spray (or brush with olive oil).  Add egg mixture and swirl to coat bottom of pan.  Use a rubber spatula to slowly scrape from the outside edge of the omelet inward, letting runny eggs flow to bottom of pan.  Do this several times, then place a lid on the pan and turn heat to low.  Cook until top is just barely set.  Drop small dollops of Laughing Cow cheese on top, followed by chopped spinach, artichoke hearts, and Parmesan cheese.  Sprinkle top with additional salt and pepper and then slide onto serving plate (either folded over, or open faced.) 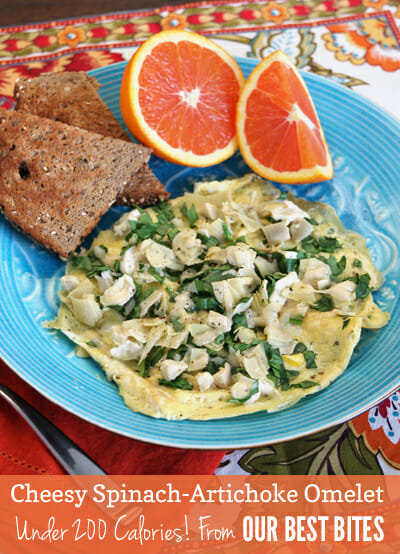