Although most long-time readers of our blog know our story, we still get loads of people who assume we’re neighbors, or at the very least, live in the same town.  But the truth is, Kate and I live about 2000 miles away from one another.  I’m up in Boise, Idaho, and Kate is way down south in central Louisiana.  We’ve actually never lived in the same city (at least at the same time!)  When we have work events, like speaking tours or book signings we sometimes get to meet up in random cities but even those are few and far between.  Although we’re really close friends, we’ve never even been to each other’s homes!   That’s why it was SO much fun this past week when it worked out for Kate and her kiddos to take a jaunt up here to spud country and visit my family. 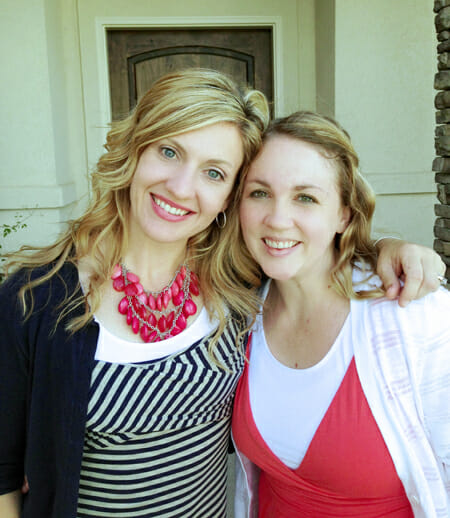 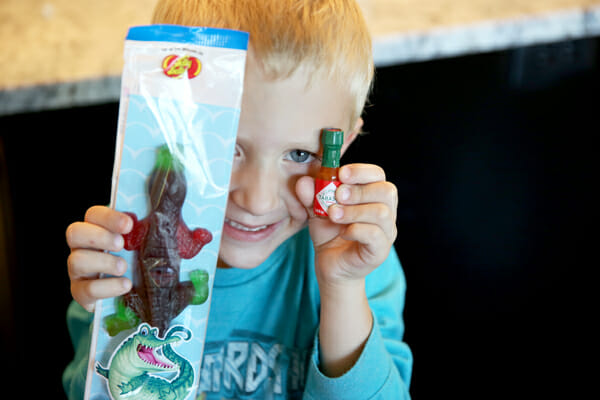 Annnnd since they had come up from Utah, a bag of cookies from Logan’s Old Grist Mill (Kate’s home town) that literally weighed as much as a human baby.  There are like 47 cookies in there.  It was awesome. 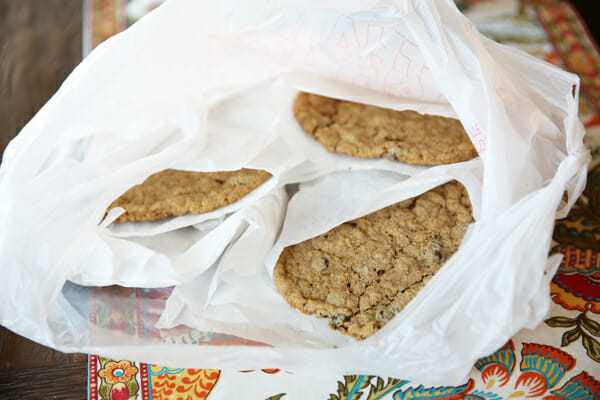 And in return, I impressed her with my mad cooking skills and best dishes. 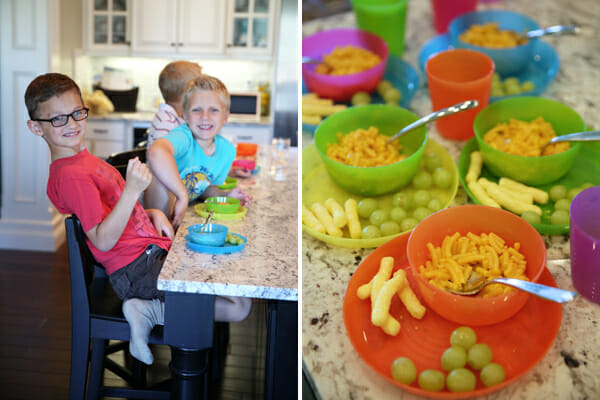 Even though our kids don’t get to see each other in person very often, they absolutely love each other.  They’re kind of like cousins! 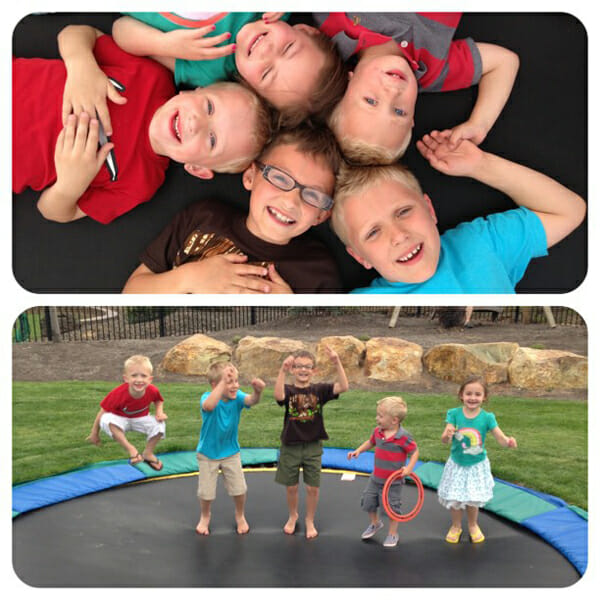 Our oldest boys are close in age, and so are my middle son and kate’s daughter.  Then to round it out, I have a 2 year old and Kate has an almost 1 year old.

Yes, we’re related to these people. 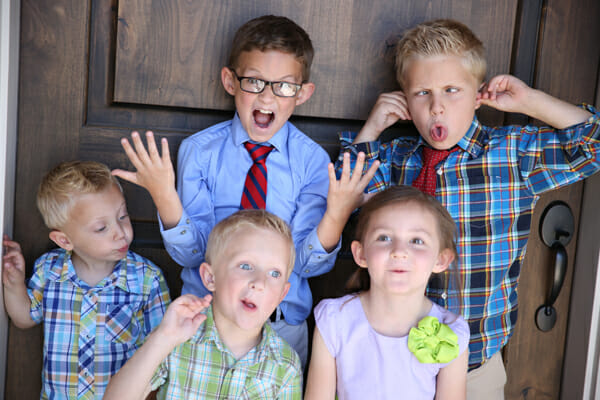 The dark haired kiddo in back is Kate’s and the blondie is mine, then that’s Kate’s cute daughter (so fun to have a little girl around in my house of all boys!) and the other 2 blondies are mine.  Kate’s baby was here.  I promise. 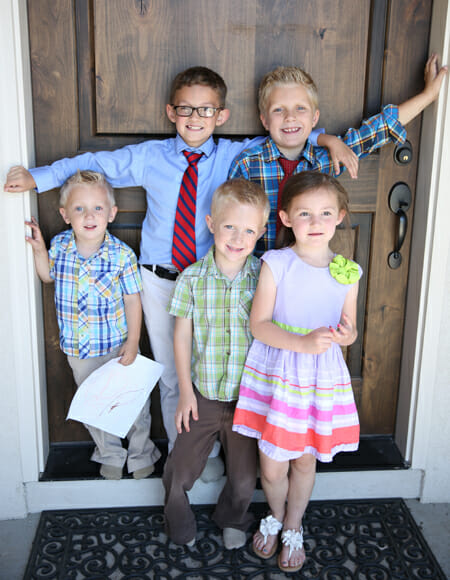 Our oldest boys in particular are really good buddies.  Kate and I kept talking about how we wished we had a recording of all of their conversations together.  They were random and funny and totally entertaining. 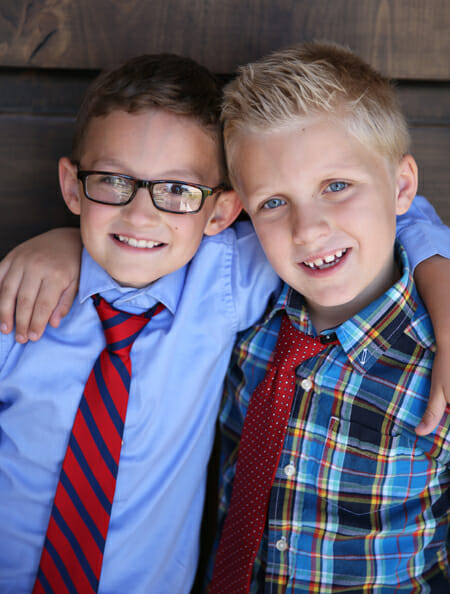 That photo was taken right after church on Sunday, and we had to sift through about 400 that looked like this first: 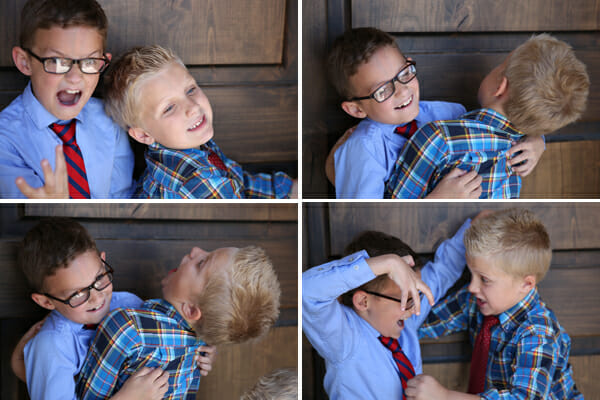 Sunday afternoon we headed over to one of our favorite parks, 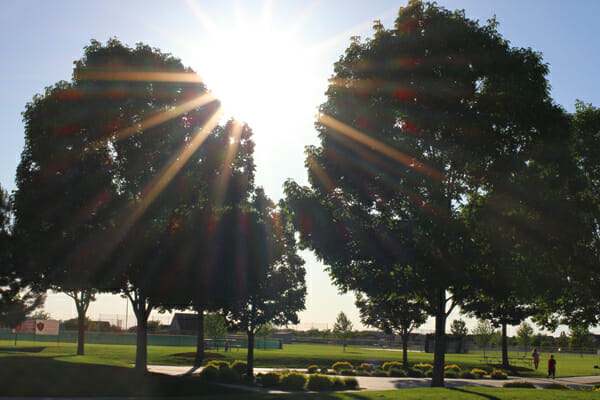 Mostly in attempts to drain them of their energy. 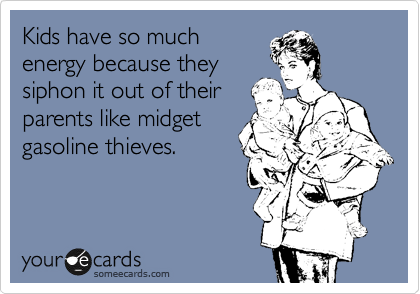 Monday morning we did slip in a little bit of work.  And what we found out was that it is freaking amazing to work on a blog project with 4 hands and 2 cameras.  And a babysitter/extra helper. 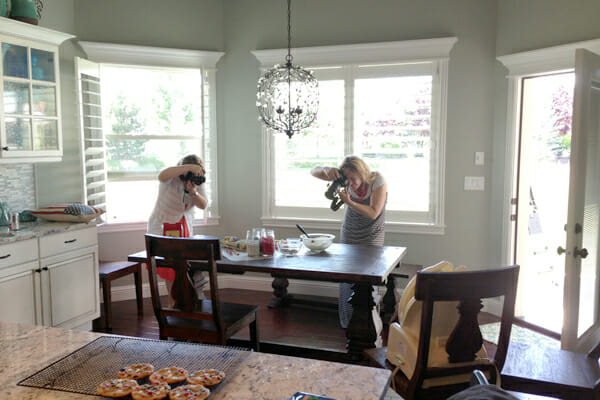 When the little kids went down for naps, my boys begged and begged to go to a local place called Dart Zone.  It’s a play land for Nerf fanatics (both old and young). 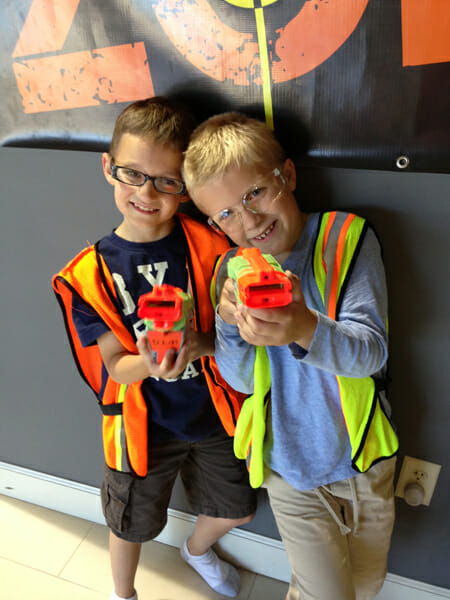 When we first arrived there were a few other older kids and as they got shot off the playing field we kept hearing them warn each other about the sharp-shooting girl out there.  Yeah, that would be Kate’s 5 year old.  After she scared off the big boys, we had the entire place to ourselves and the epic Jones vs Wells battle began. 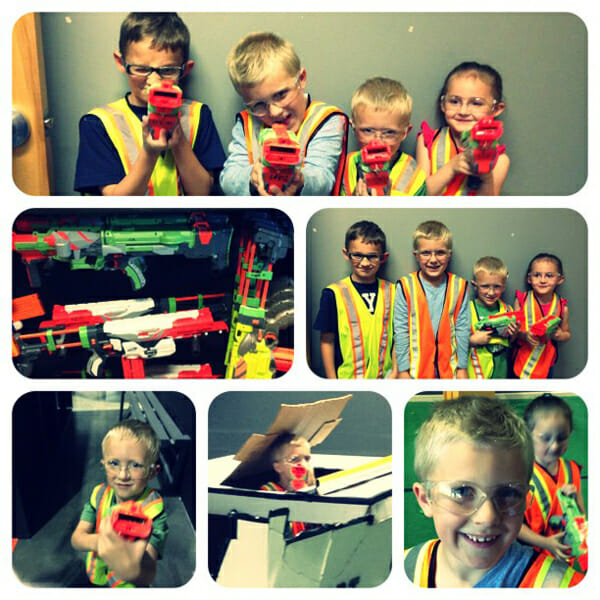 Earlier that morning I dragged Kate with me to the gym to work out with my trainer.  It was good he left us in a pool of sweat because we ate those calories right back up that night.

Ever since we’ve lived here in Boise, I’ve heard people talking about a restaurant called Fork.  Appropriately named because no 2 forks there are alike! 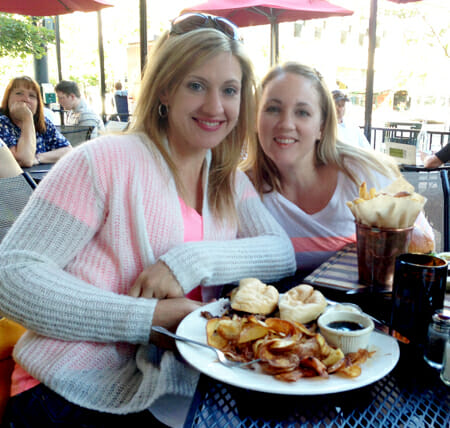 We filled up on deliciousness like my prime rib French Dip (fun fact: no matter what restaurant I’m at, if there’s a French Dip on the menu, I order it.)  My husband’s slow-cooked, fall apart ribs (yes, we took a big bite of those potatoes before snapping the pic) and Kate’s burger with Parmesan-Rosemary fries. 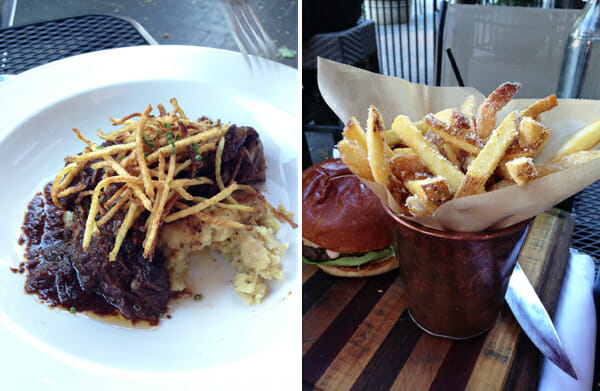 We decided we were too full for dessert, until someone from the kitchen walked out with their signature Butter Cake and gave it to us for free because the kitchen cranked out an extra.  I have a personal rule to never, ever be too full for free butter cake.  It was amazing. 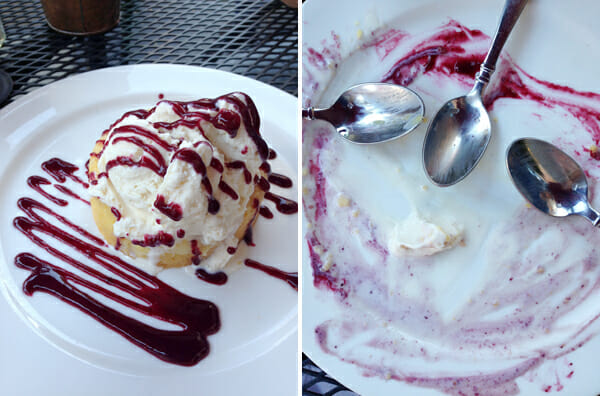 We came back home to the kiddos that night for some back yard play time.  See, I told you the baby was here!  He’s the sweetest darn thing I’ve ever seen. 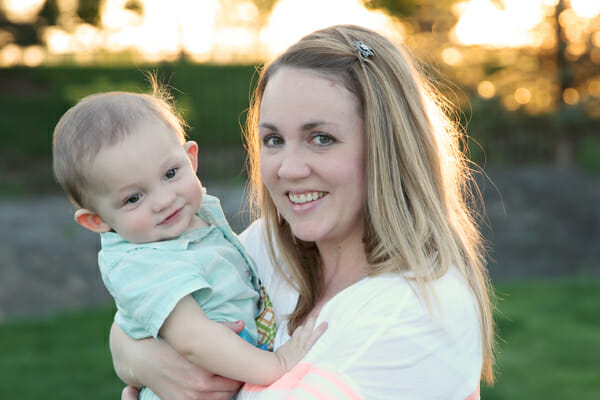 And he has THE funniest scrunched-up-nose look that literally appeared in 99% of the photos I took of him.  Yep, there it is: 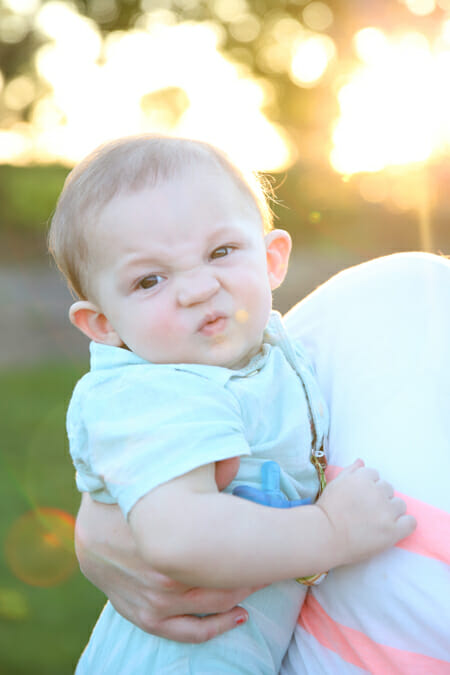 He’s a sweetie pie, scrunched-nose and all.  As soon as the sun went down, we busted out some sparklies. 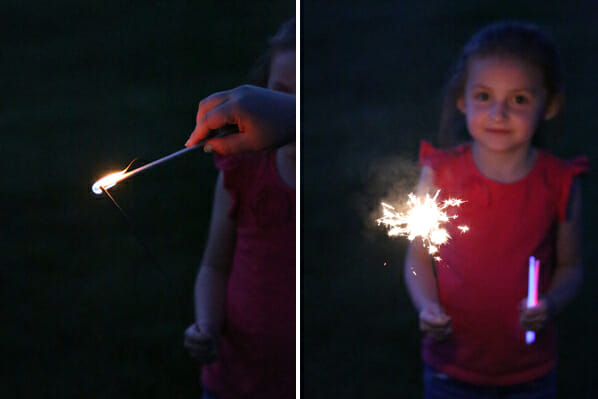 Our little project that morning involved celebrating the 4th of July that day so our kids were expecting fireworks, lol. 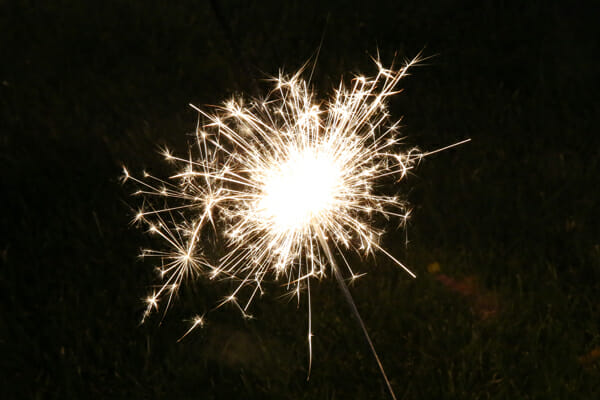 We got some super long sparklers in the wedding section of the party supply store, and made a tunnel of fire. 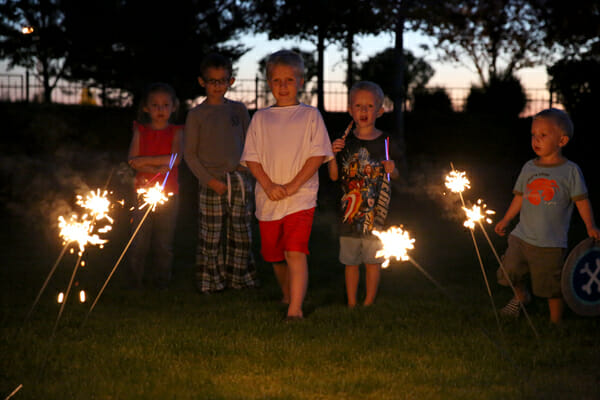 It was very popular. 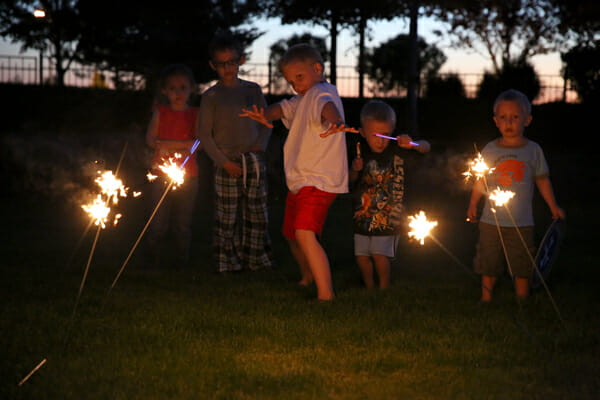 There’s nothing like a warm summer night, good friends, and things that sparkle. 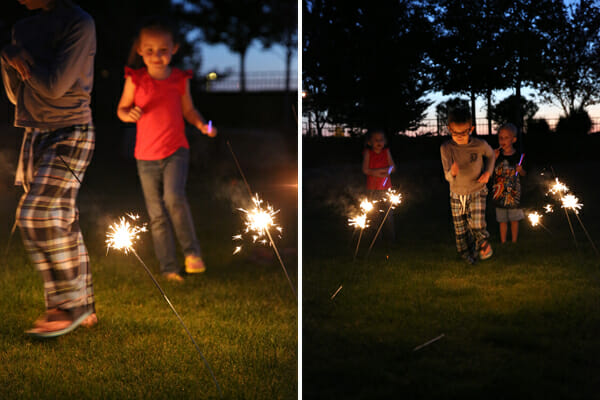 We decided now it’s our turn to visit the south before Kate and her family are outta there!  When we make it down there, you’ll be the first to see us stuffing our faces with beignets.

Last but not least, news flash: we’re on Instagram!  I just got my first iPhone (hello lover) and convinced Kate to jump on board when she was here. If you’d like to peek into our worlds, you can find us as sara_ourbestbites and kate_ourbestbites.  We use it less as bloggers and more for just every day life, so feel free to follow our random photographic journey 😉