We get loads of requests for meatless meals.  Both from those avoiding meat for dietary reasons, and more commonly for those trying to incorporate meatless meals for budget purposes.  I’m not gonna lie- I like meat.  A lot.  Which is why it takes a really great meatless meal to make me happy and this one fits the bill.  (There’s also an awesome veggie-packed meatless taquito recipe in our cook book.  One of my faves!)

Start with bright, sweet peppers.  You can use red, yellow, or orange.  Just don’t use green.  I know they’re way cheaper, but just don’t do it, okay?  Practice saying no to drugs, and also no to green peppers- for this recipe anyway.  They’re not sweet enough.  I like to buy the packs from Costco that have red, yellow, and orange in them but for this batch I just have red. 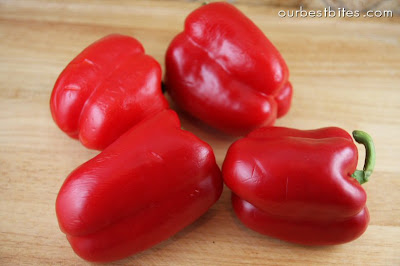 Slice off the top of the pepper.  You may also need to trim the bottom so it can stand up.  When you’re buying your peppers take a look at them and try to find ones that are roughly the same shape (shorter and squatty are better than tall and skinny like in the picture below) and with even bottoms. Also, I just want you to know that I am avoiding all sorts of jokes right now involving the words short and squatty, tall and skinny, and even bottoms.  I’ll just leave it to your own imaginations. 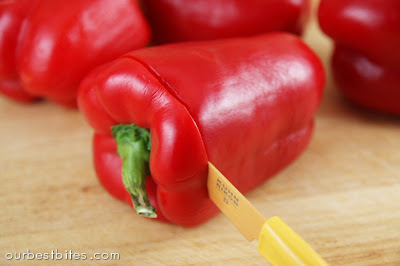 Then use a sharp knife to clean out the inside, removing any seeds and membrane (the white stuff.  have I ever mentioned that “membrane” is on the list of words I detest?  Especially when referring to food.) 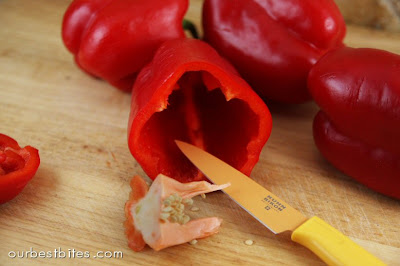 The peppers get dropped into a pot of salted water.  When making any stuffed pepper, this is a great step to remember.  If you skip the boiling they often end up crunchy on the outside.  These are boiled just enough to soften the bite, but not so much to make them mushy. 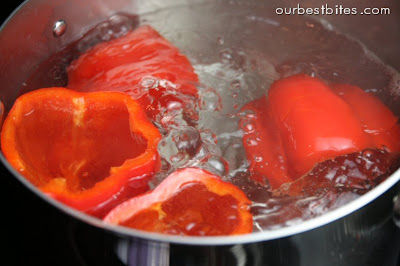 Pull those babies out with a pair of tongs (as opposed to say, your hands.  Which is something yours truly would do…) 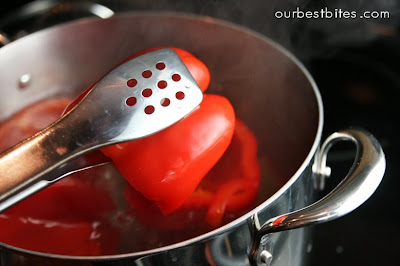 and let them drain. 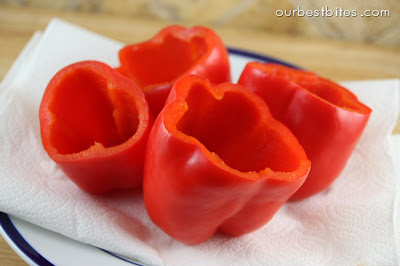 This part is sort of ingenious.  I felt like I was breaking all sorts of rules.  You are going to throw your rice into that giant pot of water.  That’s right, living on the wild side people.  No measuring, no perfectly steaming in a lidded pot.  Just boil it in there until it’s cooked and then drain out the water.  Great, right? 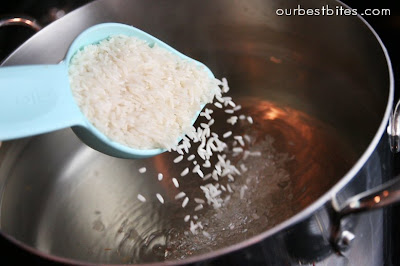 While that’s boiling away start your filling.  Saute diced onions, jalapenos (or green chilies) and garlic 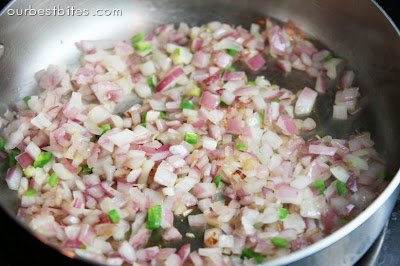 add in corn (fresh frozen corn- say no to drugs, green peppers, and canned corn.  Got it?) black beans, green onions and some chipotle chili powder.  And salt and pepper too. 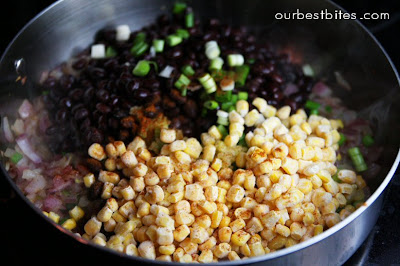 When that’s all warmed through, stir in the rice, a can of tomatoes, some cheese, and cilantro. 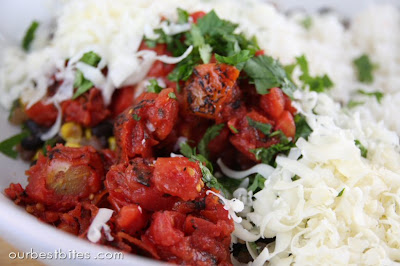 See all of the black spots on those tomatoes?  They’re good black spots.  I love “Fire Roasted” tomatoes in recipes like this.  Say yes to fire roasted tomatoes. 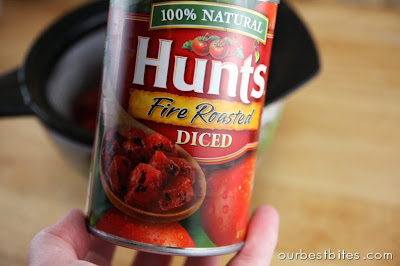 Then you just arrange the peppers in a dish- it helps if they’re touching each other so everyone stands up. 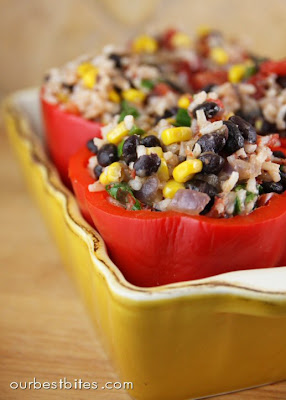 Sprinkle some more cheese on top 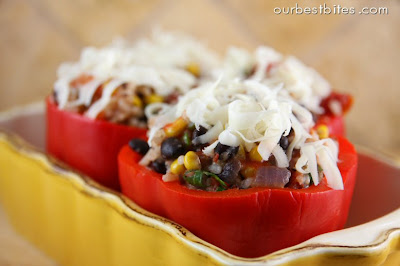 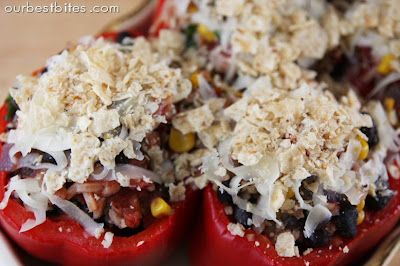 Bake ’em in the oven and everything gets warm, the cheese gets melted, and the chips crunch up on top.  They’re super flavorful and very filling! 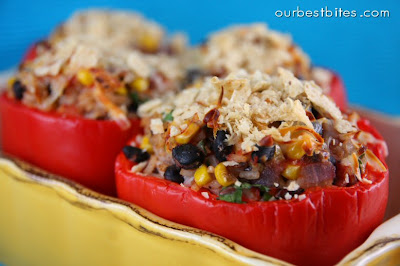 I served these with a quick Southwest Salad (seriously, I love those salad packs when you need something fast and easy) and some extra tortilla chips for scooping up the filling.

Preheat oven to 350.  Prepare peppers by washing, slicing tops off, and removing insides.  Bring 4 quarts of water to a boil and add 1 tablespoon salt.   Boil whole peppers for about 3-4 minutes, until they begin to soften.  Remove from water with tongs and place on paper towels to drain.

Add rice to boiling water and cook until tender, about 13 minutes.  Drain thoroughly.

Heat oil in a 12-inch skillet over medium-high heat.  Add onions, garlic, and jalapeno (or chilies) and cook until softened, about 5 minutes.  Add corn, beans, green onions, chipotle chili powder, kosher salt, and pepper. Stir until corn and beans are heated through, about 5 minutes.  Place peppers in a baking dish.  Remove skillet from heat and add rice, tomatoes, 1 cup cheese, and cilantro.  Stir to combine well and give it a taste.  Add additional salt, pepper, and chipotle powder to your liking.  Then evenly divide mixture between peppers.

Top peppers with remaining 1/4 cup cheese (or more if you can fit it on there 🙂 and crushed tortilla chips.