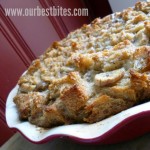 So I totally get that tomorrow is St. Patrick’s Day.  If I were with it and awesome, I’d have adorable little leprechauns sculpted out of homemade fondant or something like that.  Instead?  Yeah, I’ve got Bananas Foster Bread Pudding, which, in spite of my Irish heritage and the fact that I’m completely smitten with Irish culture, is not Irish (or even green) in any way.

So wanna hear some Kate factoids?  First, I use the internet for good (blogging) and for the borderline creepy (I tend towards light internet stalking…in completely friendly “Hey-I-just-wanted -to-learn-some-more-about-you-here’s-a-dead-rabbit!” kind of way).  Just kidding.  But only about the dead rabbit–I totally do hunt people down on the internet.

Second, I have a freakish sense of smell.  I developed a super sniffer when I was pregnant with  my daughter and it never went away.  I kid you not, ask people I interact in person with on a regular basis, and they will tell you about some uncomfortable situation where I unintentionally smelled them.  It almost always involves me identifying their laundry detergent/dryer sheets/lotion/deodorant.  I can’t tell you how many uncomfortable experiences I would avoid if I’d just THINK, “Original Tide!  Bounce!  Dove Cucumber Melon!” instead of actually saying it.

Finally, I tend to stash things in my purse that other people think are weird but that TOTALLY come in handy.  Like a W-9 form.  Or a roll of tape. Or a steak knife.

The internet stalking totally has nothing to do with the rest of the story, I just thought I’d share a little bit of my crazy with you.  But after our book signing on Friday night when we were bestowed two loaves of bread, and after we ate one of the said loaves of bread, Sara offered to let me take home the other loaf.  I packed it away in my backpack and scampered along to our Saturday activities and then hopped on the plane and wondered why I kept smelling sandwiches.  Then I came home and promptly unpacked my suitcases.  Except that I didn’t because that would require a level of togetherness that I’m pretty much incapable of.  So yeah, every time I walked past my untouched bags, I still smelled those sandwiches and could not figure out why.  And then I remembered the bread.  And I very sadly pulled it out of my bag.  And even though it still smelled delicious (obviously, since my bloodhound nose finally tracked it down), it could have taken out the giant orange cat that crawls under my house and meows in the middle of the night.  So what do you do in that situation?  You make bread pudding.  Even though it’s an international holiday of potatoes, cabbage, and Guinness (corned beef, delicious as it is, is more of an Irish-American tradition, not Irish Irish).

Preheat your oven to 400 and line a heavy, rimmed baking sheet with heavy-duty aluminum foil.  Spray it with non-stick cooking spray and set it aside.

Cut up about 3 very ripe bananas (you’ll want 2 cups of sliced bananas).  Place them in a small mixing bowl.

Drizzle 1 tablespoon of melted butter over them.

Add some brown sugar and cinnamon…

and toss it all together.

Seriously, can you go wrong with bananas, brown sugar, and cinnamon?  Spread the bananas onto the prepared baking sheet

and place it in the oven for 15 minutes or until the sugar is bubbly and caramelizing. Remove from oven and reduce heat to 350.

If this part looks delicious to you, then definitely check out our Caramelized Banana Ice Cream– it starts out just like this!

While the bananas are caramelizing, combine the milk, whipping cream, eggs, egg yolks, salt, sugar, cinnamon, and vanilla with a hand-held electric mixer  Place 1/2 of the bread cubes into a pan sprayed with non-stick cooking spray.

When the bananas are done caramelizing, gently stir them together with the cooked sugar and butter and then spread them over the first layer of bread cubes.  Slice another banana on top of the cooked bananas and then top with the remaining bread cubes.

Whisk the milk mixture and then pour the milk/whipping cream mixture over the bread cubes.

Allow to stand for 10-15 minutes, pressing the cubes into mixture as they pop up so the mixture can soak into the bread.  Chop 1 tablespoon of butter and sprinkle it over the mixture.

Bake for 40-50 minutes or until it’s golden and puffed, not burned, and a knife inserted into the middle comes out without egg on it.

Okay, you can serve this a whole bunch of ways:

1) With Cinnamon Crème Anglaise (just whisk in 1/4 tsp. of cinnamon to this recipe).

4) With any combination of the 3.  Because this is already a diet-buster, so you might as well go all the way, right?!

Preheat oven to 400.  Line a rimmed baking sheet with heavy-duty foil.  In a small mixing bowl, combine 3 sliced bananas (about 2 c.) with 1 Tbsp. melted butter.  Combine 1/4 c. brown sugar and 1/4 tsp. cinnamon and then add them to the bananas and butter.  Gently toss to combine and spread on the prepared baking sheet. Bake for 15 minutes or until the bananas are fragrant and tender and the sugar is starting to bubble and caramelize.  Remove from oven and reduce heat to 350.

While the bananas are caramelizing, use an electric hand mixer to combine the milk, whipping cream, egg yolks, eggs, vanilla, salt, remaining brown sugar, rum flavoring (if using), and remaining cinnamon.  Spray a 9×13″ dish with non-stick cooking spray and spread 1/2 of the bread cubes over the bottom of the pan.  Evenly spread the caramelized bananas and brown sugar mixture and then slice one more banana over the caramelized bananas.  Spread the remaining bread cubes over the bananas.  Whisk the egg mixture one last time and pour evenly over the bread cubes.  Allow to stand for 10-15 minutes (longer if possible), poking the bread down into the mixture so it can soak in the milk and eggs.  Bake for 40-50 minutes or until puffed and golden (but not brown) and a knife inserted into the center comes out clean.  Serve with Crème Anglaise (with 1/4 tsp. ground cinnamon added), Buttermilk Syrup, or vanilla ice cream.