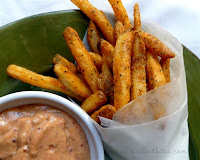 Two weeks ago, I decided I needed to practice our Better Homes and Gardens cook-off recipe one more time before the big day, so we did a test run of burgers and s’mores (which were not part of the cook-off, but it was the first time in 6 months we could light a fire without immediately wanting to die). My friend Jeni brought fries and with them, she brought what was hands-down one of the best dipping sauces I’ve ever had. Ever. Like…one of those dips where you check to see if anyone’s looking and then nonchalantly dip your finger in it and then proceed to lick it off. Yes, I totally just admitted to that.

About a year-and-a-half ago, we posted a recipe for crispy diner-style fries along with fry sauce, a species that seems to be indigenous to Utah/Southern Idaho. Being a born-and-bred Utah girl, of course I love my fry sauce. But this is the next step up–something you don’t have to apologize for or explain to people who may not be familiar with the pink stuff. This is full-blown grown-up fry sauce. And I can’t think of anything savory that it wouldn’t be good on. In addition to the diner-style fries, you could try it on…

—Oven Steak Fries
—Sweet Potato Fries (the honey-lime dip is awesome, but just in case you feel the urge to mix it up)
—Crispy Coconut Chicken Fingers
—Baked Fish Sticks
—Crispy Shoestring Onions. Please don’t even get me started on this…save your pennies on the Bloomin‘ Onion/Awesome Blossom {extra awesome} /Onion Brick (which, incidentally, gets the award for the worst appetizer name in restaurant history).
–Spread it on buns before adding grilled burgers or chicken breasts
–Use it as a sandwich spread, especially hot turkey, roast beef, or corned beef sandwiches
–Omit the ketchup and use lemon juice instead of lime juice for a crab cake remoulade

The ingredients are inexpensive and probably stuff you either already have or that are super easy to find: Ketchup, mayonnaise (NOT Miracle Whip), capers, garlic, red onion, fresh lime juice, cayenne pepper, and Creole mustard. Don’t worry, you can find Creole mustard at most major American grocery stores (Zatarain’s is widely accessible and inexpensive). It is really uniquely flavorful and so good; if you’re looking for a great ground mustard, this is one of the best options. 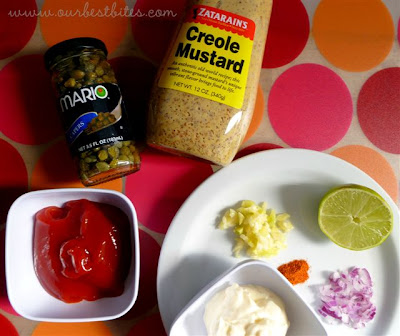 If you are wondering (or ever have, or will now that I’m bringing it up) what capers are, they’re little buds from the caper bush, which grows in the Mediterranean. The buds are plucked off the bush before they can bloom and then they are pickled. 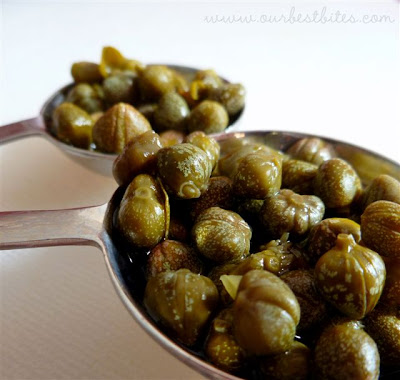 They’re salty and mild and add a similar flavor to dill pickles, only a little more subtle and complex (hence the grown-up dipping sauce).
Anyway, combine all the ingredients in your blender or in the small bowl of your food processor (if you have one) and blend until the desired consistency is reached. If you’re worried about heat, start with a little less than a quarter teaspoon of cayenne pepper and then, after you’ve mixed everything together, add a little more until the sauce is as spicy as you’d like it. 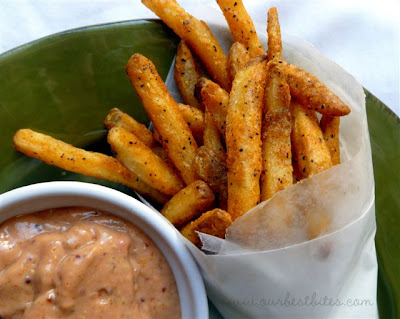 After you’ve mixed your sauce, store it in the refrigerator for at least an hour and up to a week. Serve it on whatever you want and prepare yourself for a little subtle finger-licking…

Combine ingredients in blender or the small bowl of a food processor. Blend until smooth. Refrigerate for at least 1 hour before serving.

For a crab cake remoulade, omit the ketchup and replace the lime juice with lemon juice.