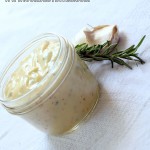 When I was a kid, we always, always, always used Miracle Whip for everything–mayonnaise was something like Crest toothpaste or Pepsi that I had some vague notion of, but we were a strict, by-the-book Miracle Whip, Colgate, Coca-Cola family and I just figured mayonnaise and Miracle Whip were two different names for the same thing.

Well, one day when I was about 12, I was making a recipe that called for mayonnaise and we were out of Miracle Whip. I ran down to our neighbors’ house to borrow some some mayonnaise and it was like a light bulb went on, like the heavens opened, like a revelation. A salad dressing revelation. If I had to mark a moment when I realized that there were culinary worlds beyond what I grew up eating, that was it (and it happened with mayonnaise).

I’ve wanted to make homemade mayonnaise for a long time, but I am terrified of raw eggs (not in a The Ring kind of way, which made me sleep with the lights on for two weeks when I was 22), but salmonella has always just freaked me out. I’ve always wanted to try pasteurized eggs, but we’ve never lived in a place where they’re sold. I finally got a chance to try them (I tried Safest Choice) and I literally whipped up my own mayo in about 3 minutes. It was awesome.

I totally, totally know that not everyone has access to pasteurized eggs, so go check out this very thoughtful and thorough tutorial on Baking Bites. She makes a lot of well-reasoned arguments regarding this method of making raw and undercooked eggs safe and once I’m out of pasteurized eggs, I’m definitely going to try it.

For the homemade mayonnaise, you’ll need an egg yolk (check out this tutorial to see how to separate eggs), a little of your favorite mustard (unless it’s yellow mustard…if that’s the case, I recommend finding a new favorite mustard!), olive oil, canola oil, and some lemon juice. That’s going to form the mayonnaise base, and then I’m going to throw in some garlic and rosemary at the end for an unbelievable sandwich spread.

Place the egg yolk, mustard, and lemon juice in a medium bowl

and whisk until just combined. Combine the oils and arm yourself with a whisk (I actually tried this with a blender, and immersion blender, and by hand, just for the heck of it, and I actually think that aside from the semi-strenuous arm workout, by hand is the easiest and least messy). Whisk the egg yolk mixture and add a few drips of the oil mixture until combined, whisking vigorously the whole time. Add a few more drips, whisking until combined. Repeat, adding a little more oil each time. As it starts to thicken and come together, you can add the oil in a slow, steady stream, whisking vigorously the whole time. After you’ve added all the oil, continue whisking for about 30-60 more seconds or until the mayonnaise is thickened. It won’t be as thick as commercial mayonnaise yet because a) it will continue to thicken with time and b) it’s a little warmer than room temperature.

Whisk in the salt and pepper and then add a little more seasoning to taste. This is your mayonnaise base and you can refrigerate it at this point and use it. However, I  recommend whisking in 2 small cloves of pressed garlic (about 1 1/2 teaspoons) and 1 teaspoon of chopped rosemary. Let it hang out for about an hour in the fridge and then you have seriously one of the most incredible sandwich spreads ever.

In a medium bowl, whisk together the egg yolk, lemon juice, and mustard. Combine the oils in a separate container and, while whisking the egg yolk mixture vigorously, add a few drips of the oil mixture. When the mixture is completely combined, add a little more oil, repeating with larger amounts of oil each time until you’re adding it in a steady stream. After all the oil has been added, continue whisking vigorously for 30-60 seconds or until the mixture is thickened. It won’t be as thick as commercial mayonnaise because it will continue to set and because it’s slightly warmer than room temperature.

Add the pressed garlic, chopped rosemary, and additional salt and pepper to taste. Refrigerate for at least an hour before serving. This will keep for about 3-5 days.