I’m a snacker. It’s often the downfall of my weight-loss attempts. I’m very active and great at exercising; I also eat a relatively healthy and balanced diet. What kills me is my need to constantly munch! So if you’re like me, then one key to healthy living might be to keep healthy snacks around. I tend to eat what’s in front of me, and in my house that’s usually fishy crackers, fruit snacks, and a constant supply of open chocolate chip bags. And having plastic containers of sliced carrots and celery in the fridge just doesn’t do it for me, I sometimes just need things with a little more substance. So while this dip has quite a few more calories than a celery stick, it’s also a lot more satisfying. When it comes to making healthy choices, a dip like this with a few pita chips might be much healthier than your alternatives (regular chips and ranch dip for example). Plus it’s suuuper tasty. I really love it.

You might be wondering how I am calling this “healthy” when it involves not only bacon, but the drippings too! I think this is a really important aspect of healthy cooking so listen up. It’s often more beneficial to include a little bit of a whole, calorie rich ingredient than to use a greater amount of a low calorie substitution. Using a couple of pieces of bacon and some of the drippings adds a great deal of flavor without a tremendous amount of calories. Likewise, using a few pats of real butter in a recipe will give you much better results (and generally be more satisfying) than substituting some low-calorie margarine. Think about eating a thin slice of rich chocolate cake, or a couple of squares of dark chocolate instead of a few of those packaged low-calorie diet cupcakes. A little bit of a good ingredient goes a long way, so the trick is just to not overdo it.

So now, on to this scrumptious dip!

Start by cooking your bacon. I slice it up into 1″ pieces and pop it right in my pot. Cook until crisp and then drain it on a paper towel. I know I just talked about portion control, but I’m also human. I always do twice as much bacaon as I need because I will eat half of it before it ever goes in the dip. 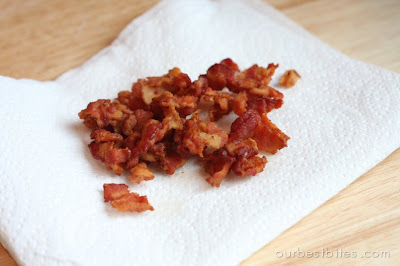 You’re going to reserve the bacon drippings in the pan. If you’ve got too much, just blot some up with a paper towel. I just leave enough to coat the bottom of the pan, 2-3 teaspoons. Then you’ll throw your garlic in there.

I don’t know if there is any smell so magnificent as fresh garlic sizzling in bacon drippings. I would pay someone to make that into a scented candle. 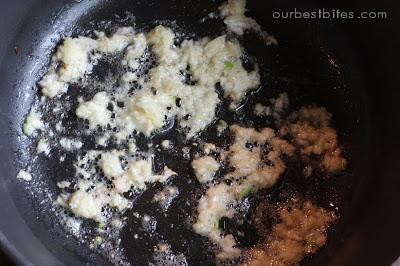 then your beans go in the pot, after they’ve been rinsed and drained. 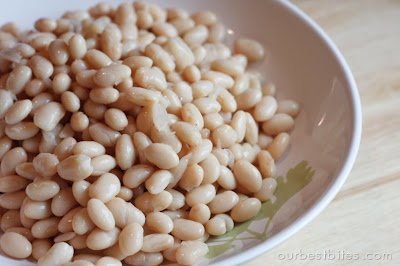 Then add chicken broth. I always use low-sodium broth. I think it tastes just the same as the regular kind but which much less sodium. 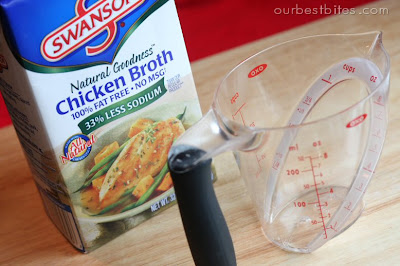 After that simmers for a few minutes, you pop it in the food processor with some hot sauce, spices, and fresh lemon juice. Oh, and green onions- looks like I forgot that pic! 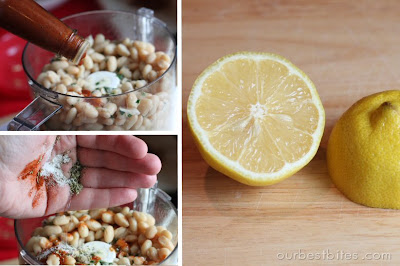 Process it until smooth. The original recipe calls for stirring in the crumbled bacon at the end (saving a little sprinkle for the top). However I like to toss it in the food processor and pulse it a few times at the end. I think breaking up the bacon distributes the flavor better and I like the smoother texture. 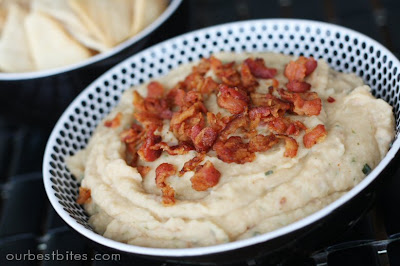 It’s best served with pita chips. You can make your own, basically following the same directions as these baked tortilla chips (but skip the cinnamon sugar!) or buy some at the store like these: 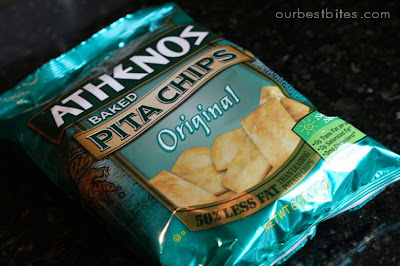 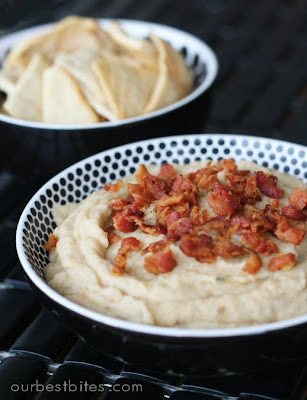 I munched on this while watching the Biggest Loser last night. Why do I always get so hungry watching people sweat their tail’s off?!

Cook bacon in a small saucepan over medium heat until crisp. Remove bacon from pan with a slotted spoon; set aside. Add garlic to drippings in pan; cook 1 minute, stirring frequently. Add broth and beans; bring to a boil. Reduce heat, and simmer, uncovered, 10 minutes.
Combine bean mixture, onions, and remaining ingredients in a food processor, and process until smooth. Spoon mixture into a bowl; stir in 1 tablespoon reserved bacon (or add to food processor and pulse a few times). At this point taste it and add more salt to taste, as well as hot sauce and lemon juice if desired. (I usually go heavy on both of those) Sprinkle dip with remaining bacon just before serving.
Serve with pita chips.
Storage: This works great to make ahead of time. Just store in the fridge and warm it up in the microwave before serving.