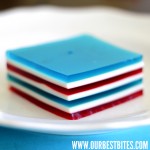 Apparently 4th of July layers are what all the cool kids are doing this week. And by cool kids, I mean Sara and me. And by Sara and me, I really mean Sara because I’m a tiny bit nerdy in almost every way. So, basically, one cool non-kid and one semi-nerdy non-kid are posting layered red, white, and blue recipes this week. But that sounds awkward.

So if you weren’t around during our last venture into the territory of Jell-O creations (or in case you don’t, you know, remember a blog post that’s over 1 1/2 years old), I’m not the biggest fan of Jell-O. I think it’s weird. In my weird world, eating Jell-O Jigglers feels like eating fruit-flavored skin (not that I eat a whole lot of skin, but that’s how I imagine it would feel). However, I think Jell-O is infinitely cool. I like playing around with it and making stuff with it and taking pictures of it and, shockingly, I actually really kind of like this layered Jell-O and for more than its stunning good looks.

I usually make this in a bunch of different colors and flavors (except for lemon…I have an unfounded prejudice against lemon Jell-O), but it’s also really fun to do in holiday colors. Like red, white, and blue for the 4th of July next week.

You’ll need 4 3-ounce packages of Jell-O in whatever colors you want (you can’t see it, but I have strawberry and cherry for my reds and there was a little OCD-ness squirming inside me that I wasn’t using the same two flavors or the same two exact colors), 4 packets of unflavored gelatin (I used Knox packets, each of which had exactly 2 1/2 teaspoons in them), and 1 14-ounce can of sweetened condensed milk. And water. But we’ll get to that later. 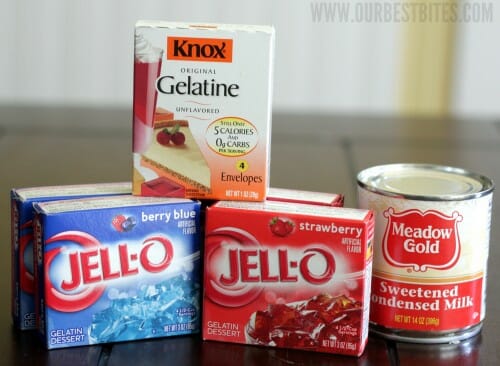 Spray a 9×13″ pan with non-stick cooking spray and then use a paper towel to spread it around and remove the excess. This will help release the Jell-O when you cut it (duh), but wiping it will also keep you from getting any little oil slicks.

In a small mixing bowl (or large cereal-type bowl), mix one 3-ounce package of Jell-O with 1 1/4 teaspoons (1/2 a packet) of unflavored gelatin. Add 1 cup of boiling water and pour it into the prepared pan. Place it in a completely level refrigerator and let it set for 20 minutes.

While the Jell-O is setting, mix the can of sweetened condensed milk with 1 cup of boiling water in a smallish-medium mixing bowl. 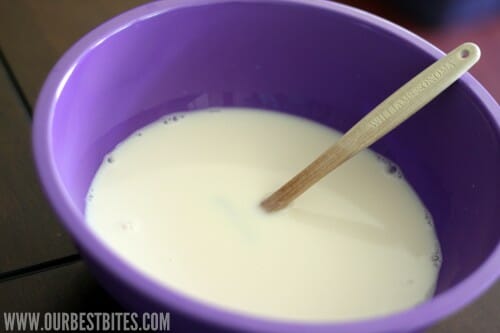 Place 1/2 cup cold water in a small mixing bowl and sprinkle with 2 packets of unflavored gelatin. Let it stand for 2-3 minutes or until the gelatin soaks up the water and it looks grainy. 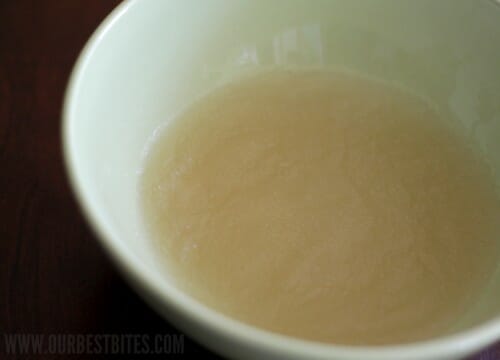 Add 1/2 cup boiling water and stir until the gelatin is completely dissolved. 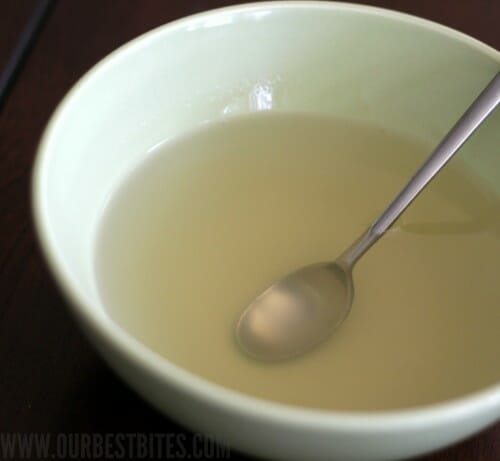 Add the dissolved gelatin mixture to the sweetened condensed milk mixture and stir to dissolve completely. Allow to cool to room temperature.

When the first layer of Jell-O has set, carefully pour 1 cup of the sweetened condensed milk mixture over the Jell-O. Place the pan back in the refrigerator for 15-20 minutes or until set.

Right after you place the pan in the refrigerator, repeat the first step with the next flavor/color of Jell-O. It should reach room temperature by the time the sweetened condensed milk layer has set up, so at that point, carefully pour it over the white layer. 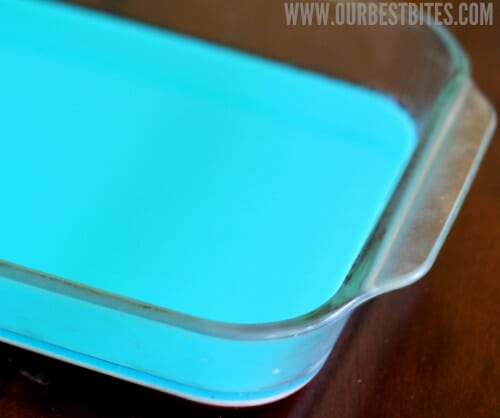 Repeat with the remaining layers of sweetened condensed milk mixture and Jell-O. Because the gelatin has been mixed with the sweetened condensed milk, be sure to keep that mixture in a warmer area and, if it starts to set up, place it in a larger pan or bowl and then add some hot water to the outer bowl to keep the mixture from setting up before you’re able to finish all the layers.

When all 7 layers are complete (4 colored layers and 3 white layers) and have set up, carefully cut them into rectangles. Or cubes. 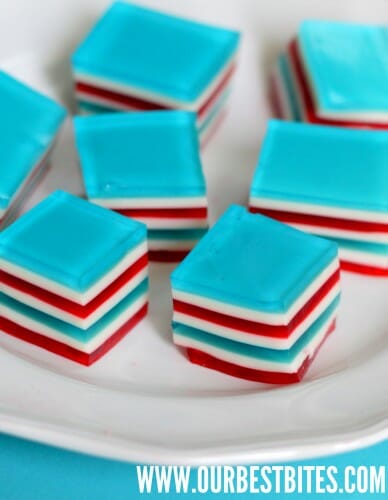 Or whatever shapes you want. And prepare yourself for ooohs and aaaahs and kids and grown-ups thinking you’re awesome. 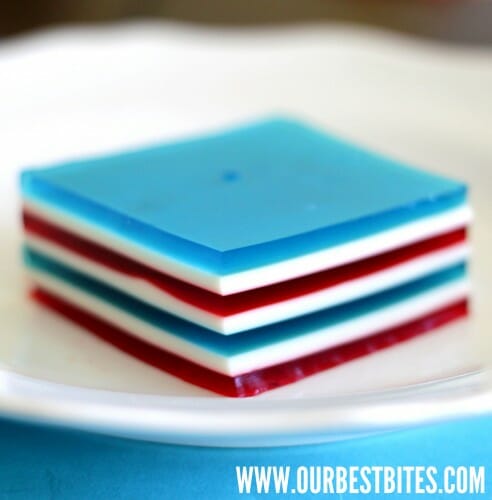 Mix and match colors you love for with layered Jell-o! Pretty to look at and fun to eat, you’ll be sure to draw in some “oohs” and “aah”s!

If you haven’t been over to Sea Cuisine yet, click here to check out some fun photos from Sara’s Caribbean adventures last month!