It’s been almost 1 year exactly that we brought a furry little 4-legged addition home to our family.  I’m here to tell you all about it.  From how I went from saying NEVER to being obsessed with the idea and what I really think now that a year has passed as a dog owner.   I know a lot of you are in the same boat, where your family perhaps wants a dog and you’re just not sure about it.  Will it end well?  Is it like having a newborn baby?? (Spoiler alert: Yes.) Is it just one more living thing to clean up after??  (Also yes).  Will I regret doing this? (Surprisingly, no).  Let me tell you all about our family’s decision to get a dog and some things we learned along the way! 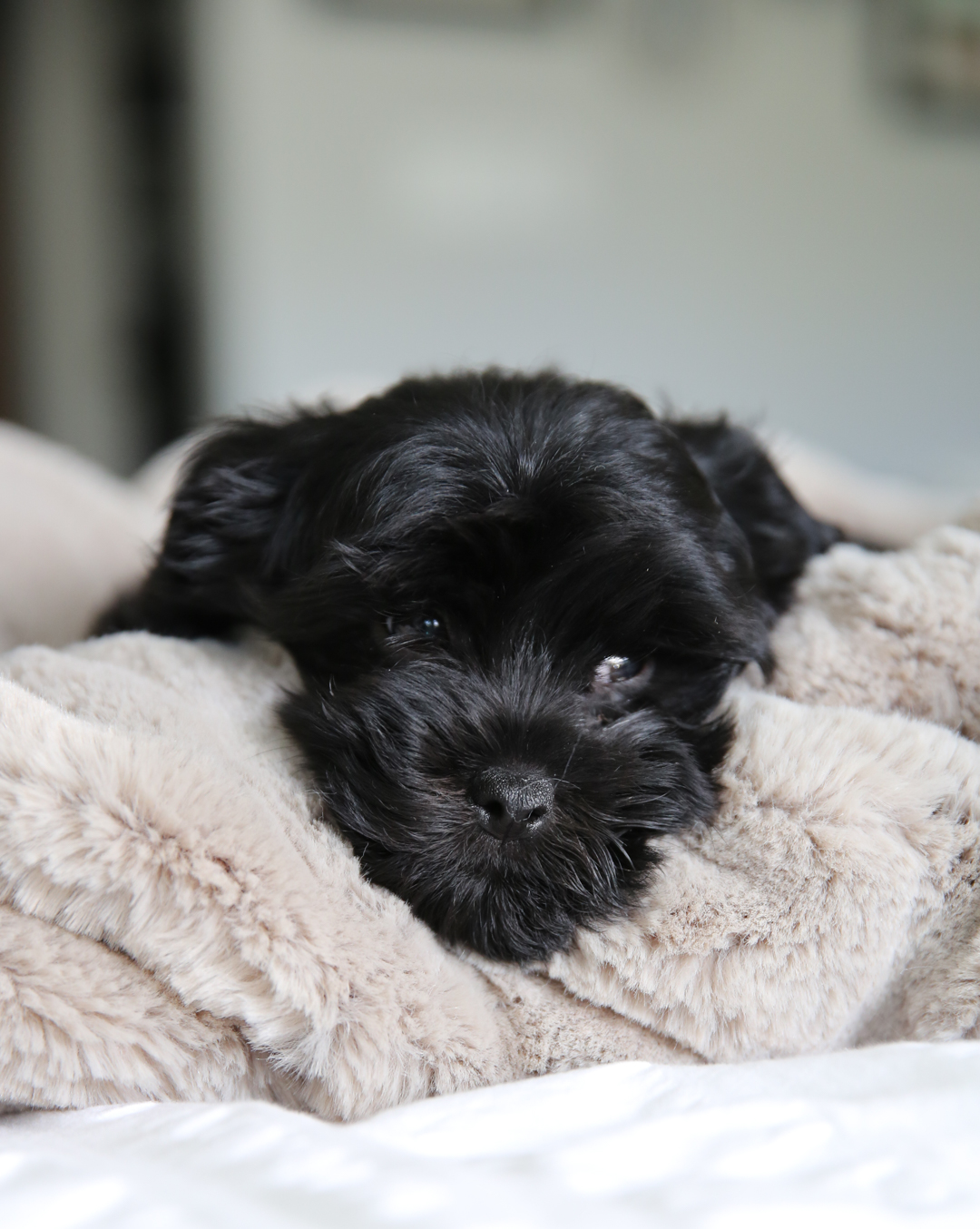 I grew up with a big, playful black lab and I always assumed one day we’d add a lab to our family as well.  ONE day.  When my boys were much, much older.   But the older I got the more opposed to even that idea I became.  Several of my family members had big dogs and while I love the dogs, I decided I never wanted a big, messy, drooling, shedding animal in my house, (I have enough messy things to take care of and clean up after) but if we did have an animal, I wanted it to be able to come in our house!  I didn’t see the point of having a dog and making it stay outside.  I was torn.  Then one spring day, two girls in my church congregations had newborn babies the same weekend.  We went to go visit both of them and I held those tiny little humans and I thought my heart would burst.  I was done having kids and this made me want something tiny and cuddly again!  That was the night I came home and started googling puppies.  Once you start googling puppies, it’s a deep, dark hole. I blame the human babies.

I have one son with very severe pet allergies so we knew that while we support and encourage pet adoption and rescue, that  was out of the question for us.  We needed to look at very specific breeds and make sure they were pure bred.  (Even that isn’t a guarantee, but it was going to be our best bet). I started looking at Golden Doodles (because it seemed like the trendy thing to do??)  And the more I researched things on my “wants” list, the more I realized a small dog was maybe what we wanted.  I had NEVER considered a small breed, I always figured we had 4 boys and we needed something like a golden retriever or a lab.   Little dogs are for grandmas, right??  One of the most helpful things for me was Instagram!  I reached out to my followers- people who had had dogs and been through this and they were so, so helpful.  I explained my wish-list for a dog and there was a breed that was mentioned over and over again: Havanese.  I had honestly never even heard of them. 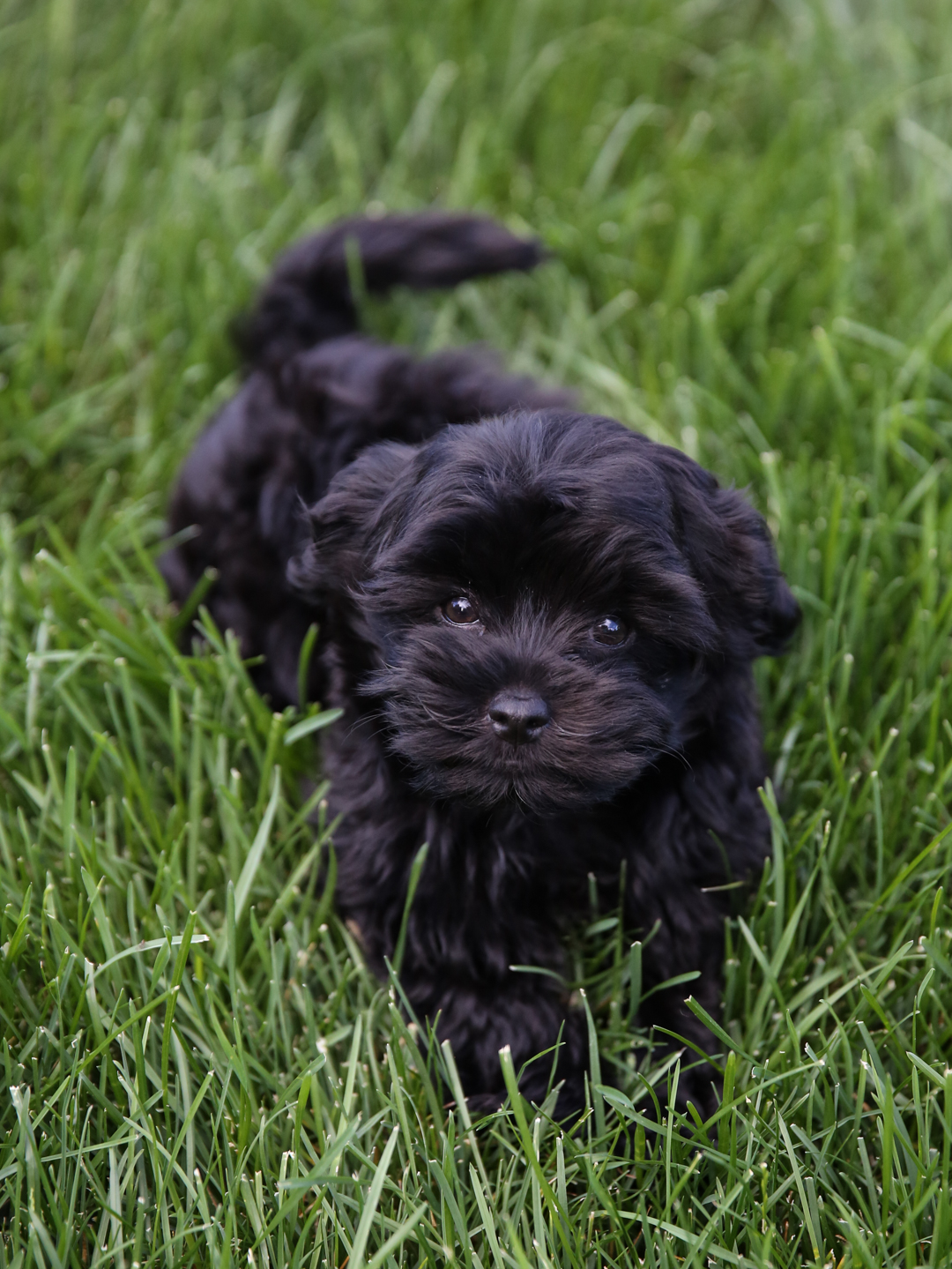 What we love about the Havanese Breed

-They don’t shed. (I seriously have never seen a single hair from that dog, anywhere)
-They have hair, not fur
-they are “hypoallergenic.”  That’s a controversial term, but in short, my kiddos with horrible allergies can cuddle him all day and we have zero issues at all, ever.
-They are known as being “big dogs in a little dog body” . ie:  playful, fun personality and GREAT with kids.  He loves to play fetch and go on walks, and wrestle and all that stuff.
-he’s not “yappy,” hardly ever barks and has the best disposition
-because of his size he’s very portable.  VERY easy to just pop in the car with us hold in my arms if I need to.   I didn’t realize how much I would come to love that part of this equation but I can honestly say the ease of having a small dog has made this process so much better for our family.  He’s seriously easy. 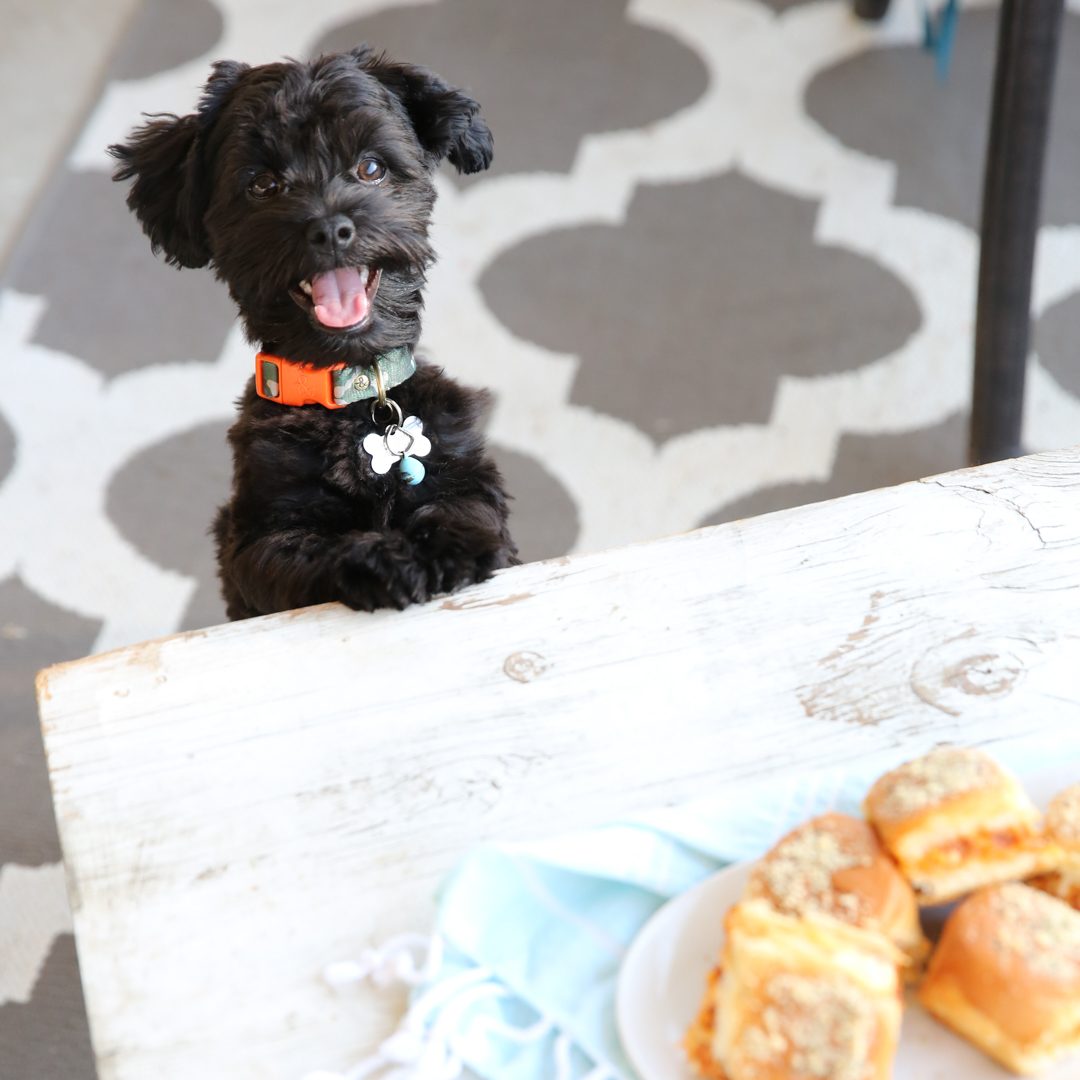 Should I get a male or female dog?

I always had this assumption that female dogs are better for some reason.  Seems like people always request the females from the litters first.  Our knowledgable breeder really takes time to place the right puppies with the right family and when she heard I had 4 young kids she said I should definitely get a male.  She said the females tend to want space and some privacy and even have a little attitude, but male dogs want to be one of the kids and they’ll be right in the middle of the party, and she was right.

We brought home our male Havanese puppy when he was about 13 weeks old and named him Finn.  Many people will sell puppies as early as 6-8 weeks but our breeder was adamant that we wait until at least 12, minimum.  The longer little pups stay with their Moms, the healthier and better trained the are for their new owners.  As excited as we were to bring that pup home and have him while he was tiny, I’m so glad we waited like she said.   He was still plenty tiny!

I will add that when the littler of puppies was born, our breeder originally paired us with a particular puppy.   Weeks later when my husband went to visit, the breeder suggested we switch to a more rambunctious little pup in the litter since we had 4 boys in our family.  My husband saw the playful pup running and jumping everwhere and then then our original pup sitting quietly and calmly in the corner.  He immediately knew that calm little runt in the corner was the one we preferred and we’re so glad he went with his gut because our dog has kept that wonderful disposition!

The first 6 weeks raising a puppy

You guys, the first 6 weeks with a puppy is hard.  People often equate a new puppy to a new baby and it’s accurate.  It takes time and patience.  Lots of patience.  We bell-trained our pup, which means you hang a bell on the door and EVERY time you take him out to pee you ring that bell so eventually he’ll know to ring it himself when he needs to go out.   Our breeder was doing this from the time he was born so it was a fairly easy transition at home.  It took probably a solid 3 months before he was fully house trained and I thought my husband might lose his mind during that time.  All I can say is be PATIENT and be CONSISTENT.  Just like a baby!

The nights are difficult at first as well.  Our breeder gave us good advice and said if you stay up with that puppy or take him out of his crate every time he whines during the night, he’ll whine all night!  Put him somewhere safe and dark and don’t look back until morning.  They’ll learn.

Finn was the runt of the litter and at his full grown size he’s only about 10 pounds.  People always ask us if he’s a puppy.  He has THE softest fur I’ve ever felt on a dog before and everyone who pets him comments on it.  He feels like a furry bunny!    He has an incredibly great disposition; we seriously couldn’t have asked for a better dog.  He’s behaved and sweet and loving and honestly so easy to care for. 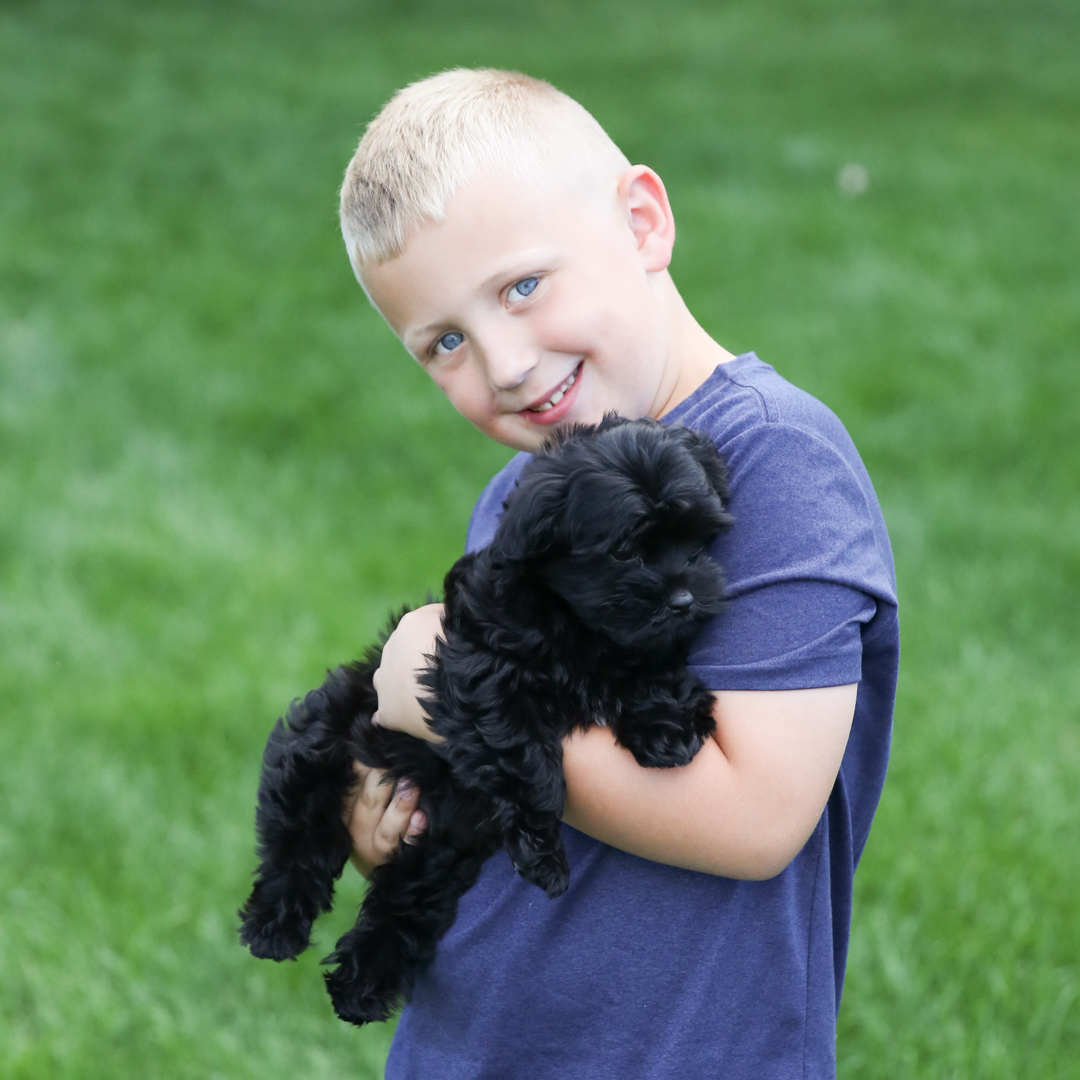 But seriously, how much work is a dog?

I worried a dog would just be SO. MUCH. WORK. and this one isn’t.   I don’t think that’s true for all dogs.  I think it’s all about the breed you choose and the specific dog you end up with.  I think the size of our dog makes a huge difference in this department because he’s incredibly easy.  For the first 6 months we left him in a playpen type thing when we left the house, and at night, but now  when we leave the house he just roams free inside.  He sleeps wherever he likes and he doesn’t have accidents inside.  Because he’s little, his poop is also little, so that’s not a problem to take care of either.  We really lucked out and got an incredibly behaved dog who just really isn’t very much work.  He loves to play, but spends most of his days curled up in a little ball somewhere (usually under my swinging chairs on our furry rug) sleeping.  He doesn’t really chew on things much so I honestly don’t have many complaints. 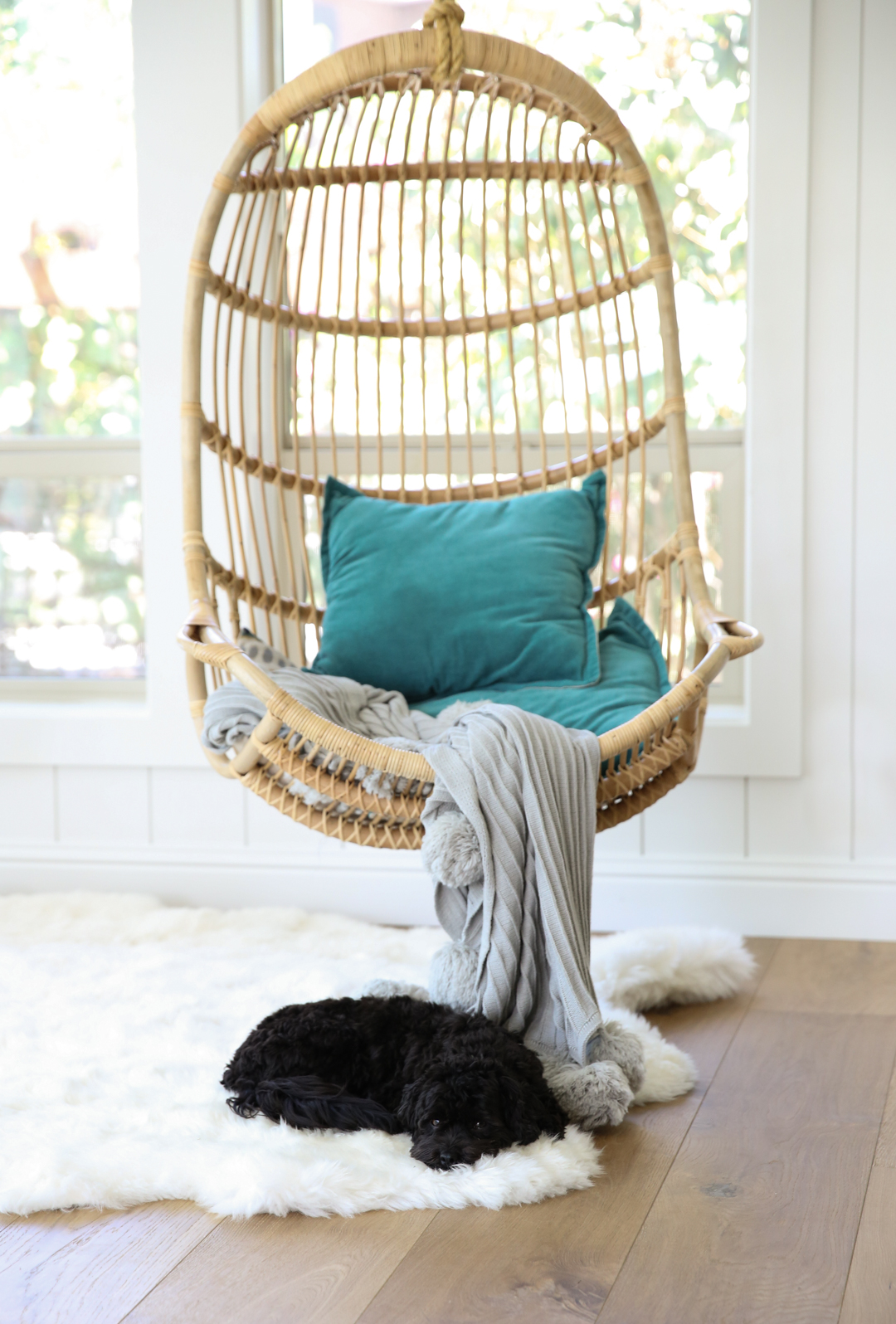 You have to plan more when you leave town.  It’s harder to just pick up and leave.  Boarding a dog is an added expense, so that’s something to think about- what will you do with your pet if you travel or are gone for a whole day?  We are lucky and my Dad lives just minutes away and our dog loves him possibly more than he loves us.  You obviously have to get them fed each day, and our dog requires grooming, but that hasn’t been a huge deal either.  I found an affordable groomer who does a great job so we spend about $35 every couple months to get his hair trimmed.

I just wanted to add one note about this- I was honestly so worried when we took our dog to get his first haircut because I think small dogs of this style look so nerdy once they get their “grown up” haircuts, haha.  I didn’t want him to have one of those long mustaches or anything like that- could we just keep him looking like a puppy forever?  Many of you on instagram recommended to ask for a “puppy cut” at the groomer.  It took a couple times of going back and forth and looking at pictures to get it just right but now we have that haircut down and people honestly assume he’s a puppy still.  I get his mustache, ears and head trimmed short, and keep his fur at a short but not shaved length so it’s even all over.   It’s seriously the cutest. 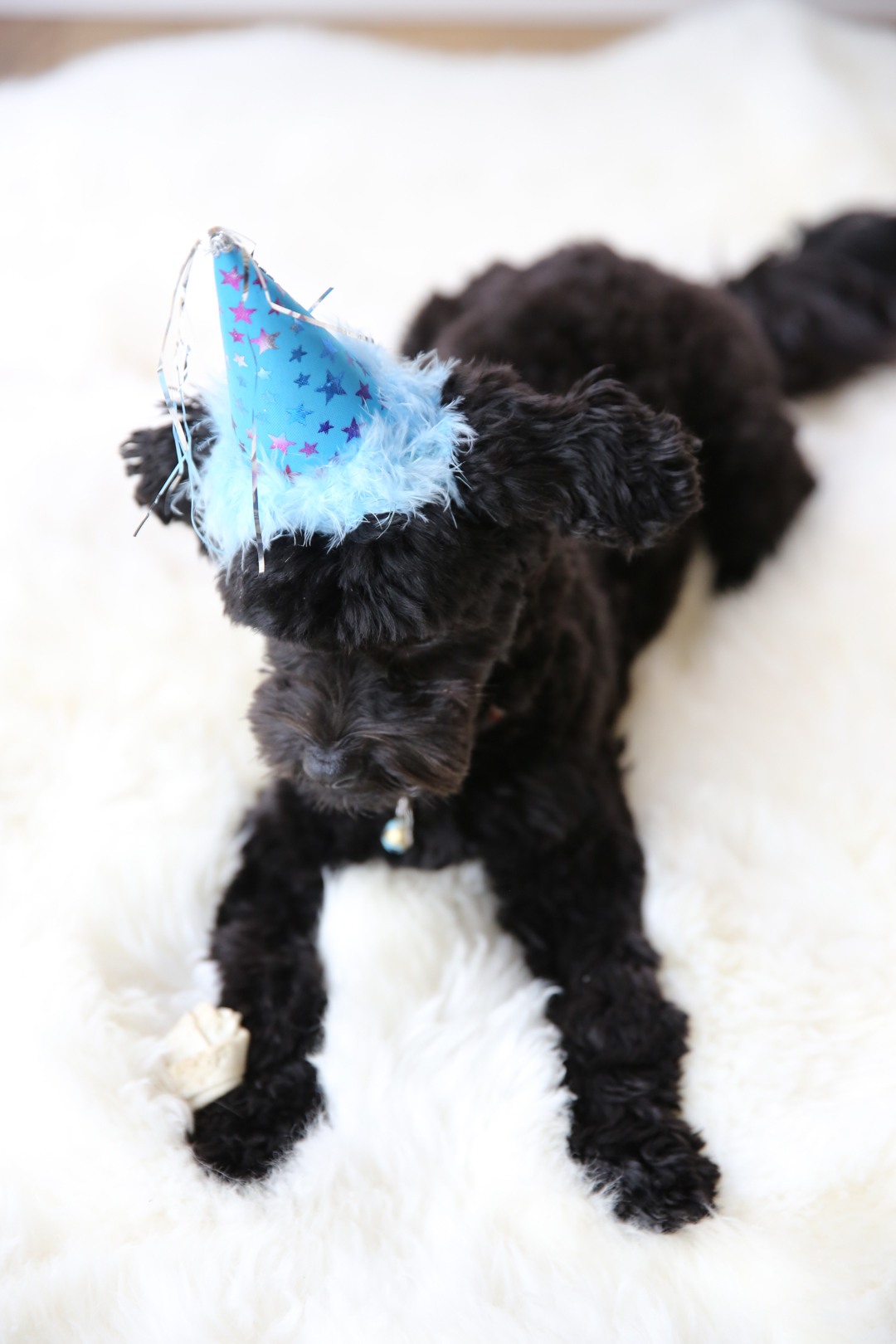 Are you glad you got a dog?

So one year later how do I feel?  I’m so happy we got a dog.  It’s been such a great addition to our family and such a fun thing for our kids.  We couldn’t imagine our lives without him now.  It’s just added another dynamic and taught our kids responsibility and how to care for and be kind to animals.  In short, we just love him.

I think that’s it- let me know if you have any questions!