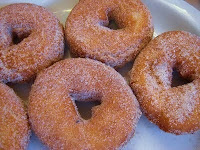 I bet every single one of you is thinking right now, “Hey, I wish those Our Best Bites gals would post some more treats! We haven’t had enough of those lately!” What’s that? You need doughnuts? I hear you loud and clear!

During the summer between high school and college, my well-meaning parents thought I should have something better to do than sit around and be super-annoying for three months, so I was forced to get a job. After the magic of high school graduation had faded and I was left penniless (or at least as penniless as a teenager with a roof over her head, food in the fridge, and gas in the car can be) and bored, I started working at the bakery of a local grocery store. Sounds fun, right? It so wasn’t–second only to apartment managing as the worst job I’ve ever had. However, one perk was that I could eat and take home as many of the baked goods that hadn’t sold that day as I wanted. It started with a bagel here, a piece of bread there. By the end, it was like, “Oh, I’ve only had 2 doughnuts today, another one isn’t a big deal!” It’s really good I was only there for three months or I would’ve gained the Freshman 15 30 before I even started.
Anyway, during this window of generous doughnut sampling, I discovered one thing: I like yeast doughnuts, but I love cake doughnuts. I love everything about them–the delicately dense, crumbly texture, the variety of flavors–blueberry! Devil’s food! Buttermilk! Spice!–I mean, really, what’s not to like? I also discovered that they’re called cake doughnuts, not because they’re baked like cake but rather that they use baking powder as the leavening agent rather than yeast. Next time someone accuses you of wasting time and not learning anything on the internet, you shoot THAT little factoid their way!
These cake doughnuts taste just like fall. Whip a batch up for a post-trick or treating snack, send some with your honey to work, or bring them to your kids’ Halloween parties. One AWESOME thing about these is that they keep well for even a few days after you make them (as long as you keep them sealed in an air-tight container or bag), so they don’t have to be eaten immediately. In fact, dare I say it, these are somehow better the next day (any Alton Browns out there want to take a stab at that one?), so you don’t have to be a hero and try and make these with a million other things going on.
Apple Cider Spice Doughnuts
1 c. apple cider, preferably fresh apple cider or something high-quality like Simply Apple
1 c. sugar
3 1/2 c. all-purpose flour
2 tsp. baking powder
1 tsp. baking soda
1/2 tsp. salt
3/4 tsp. pumpkin pie spice
1/4 c. butter-flavored shortening
2 eggs
1/2 c. buttermilk
1 quart canola or peanut oil (for frying)
Spiced Sugar
Shake or whisk to combine:
3/4 c. white sugar
1 Tbsp. + 1 tsp. pumpkin pie spice 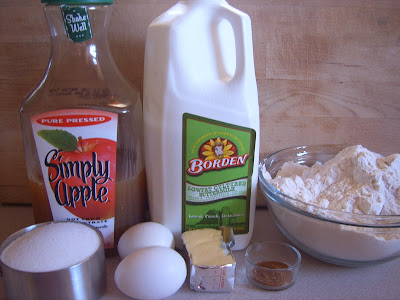 In a medium saucepan over high heat, bring the apple cider to a boil. Continue to cook over high heat for about 7-10 minutes or until it’s reduced to 1/4 c. Remove from heat and allow to cool (you can transfer it to a heat-safe cup and place in the refrigerator or freezer to make things move a little more quickly. Also, if you’re in a pinch, you can use 1/4 c. of undiluted apple juice concentrate).
While the cider is reducing, combine shortening and sugar in a large bowl and mix with an electric mixer on high for 2-3 minutes or until it’s light and fluffy (if you’re using a KitchenAid mixer, use the paddle beater). Add eggs one at a time, beating completely after each addition. Add reduced cider and buttermilk and beat until combined.
In a separate bowl, whisk together flour, baking powder, baking soda, salt, and pumpkin pie spice. Add flour mixture to the liquid mixture and beat until just blended. The dough will be very soft–it will be about the consistency of chocolate chip cookie dough (minus the chocolate chips, of course! 🙂 ) 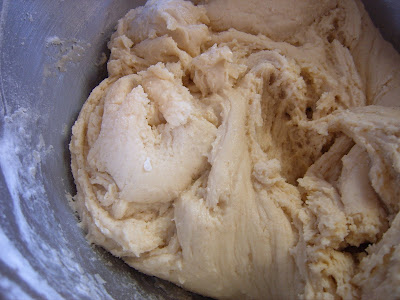 Carefully lay a sheet of plastic wrap on top of a baking sheet. Transfer dough to the plastic wrap. Lightly flour a rolling pin and roll dough out to about 1/2″ thick. Top with another layer of plastic wrap and transfer the pan to the freezer for about 20 minutes or the refrigerator for 1 hour. While dough is chilling, you can prepare the spiced sugar topping.
When the dough has chilled, remove from the freezer/refrigerator. Using a round cookie cutter, cut circles out of the dough. Using a smaller cookie cutter (I only had a tiny heart or a tiny shamrock, but c’mon, aren’t these the cutest things you’ve ever seen??), 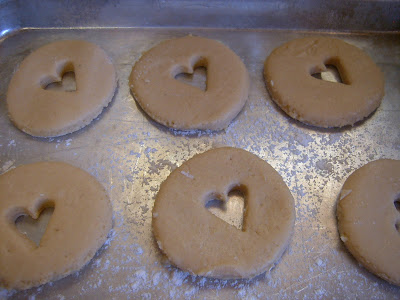 cut the centers out of the circles and reserve the “holes” for little bite-sized pieces of apple-spiced goodness! Place cut dough pieces on a lightly floured baking sheet. When all the dough has been cut out, place the pan back in the refrigerator while you prepare the oil for frying.
In a large, deep saucepan or Dutch oven, heat 1 quart of oil over medium heat. If you don’t have a candy thermometer, go buy one–they’re not just handy for this recipe, but they are also a) fabulously cheap and b) ALWAYS useful. Anyway, using a candy thermometer, heat oil to 325 degrees. While oil is heating, line a plate or baking sheet with paper towels.
When the oil is hot, carefully place a few pieces of dough into the hot oil (don’t crowd the pan, but you can probably get away with cooking 3-4 at a time, at least). The dough will sink down and then rise to the surface. Check the bottom side; if it’s golden brown, flip the doughnut. If it’s still a little pale, give it another 30 seconds or so and then check it again. After you’ve flipped the doughnut, the other side will cook significantly faster, so keep an eye on them. All in all, they should take about 90 seconds-2 minutes to cook completely.
Remove doughnuts from hot oil with a heat-proof slotted spoon and transfer to paper towels, followed by a baking rack (if you need the paper towel space for more doughnuts). 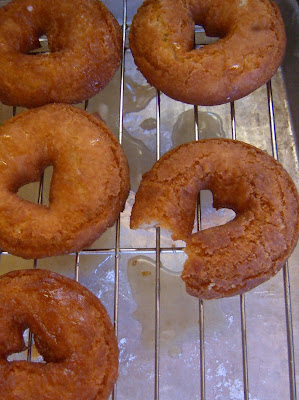 What can I say, I couldn’t resist!
Repeat frying process with remaining dough and then with the holes–the doughnut holes will cook EXTREMELY quickly, so be careful not to burn them.
Place spiced sugar mix in a large Ziploc bag and then shake a few doughnuts at a time in the mixture. 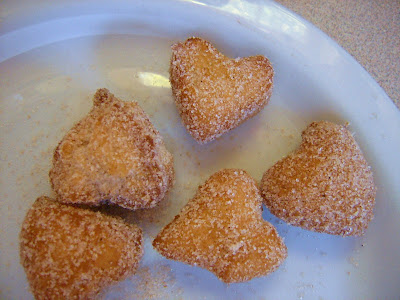 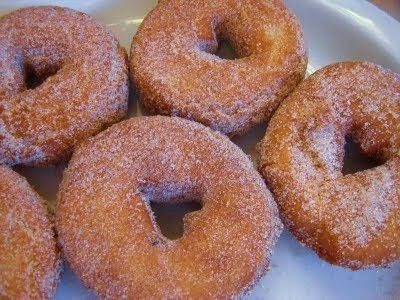 Makes about 24-36 doughnuts (plus as many doughnut holes), depending on how big you cut the doughnuts and how many times you roll out the scraps.

And go ahead and buy the big ‘ol jug of apple cider, because on Monday Sara is going to show you how use the rest of it! And pop in this weekend for a little bonus post too!