Sara mentioned in her day-after-Thanksgiving post that neither one of us had the Thanksgivings we were anticipating. Because this was our first Thanksgiving in our new house (and also the first time we’ve had any kind of room to entertain), I was so excited to cook a huge dinner for guests. Until my daughter got strep throat the day before Turkey Day and we had to call it off. But there was no way that I wasn’t making all the food I’d planned on–I felt like it was a rite of passage or something to have a traditional Thanksgiving in our new house, like it wasn’t really our home until we started making those memories here.

There were a lot of leftovers.

Like most of an apple pie and most of these mini banana cream pies.

I like leftovers to a point, but I like recycled leftovers even better–nothing beats taking something you already have and turning it into something else. I’d had this idea for Apple Pie Ice Cream floating around in my head for awhile, but now that I had almost an entire apple pie, it became a reality. A delicious reality.

Since most of us don’t have most of an apple pie lying around most of the time, I’ve modified these directions to include all the ingredients of apple pie, just in its individual parts. These can be done in steps–you can make the apple pie filling a few days in advance and you can always make the ice cream custard 2-3 days before you need it. And even though I’m a pie crust purist, almost to the point of snobbery, I did use a refrigerated crust for the “deconstructed” pie, just because I figure if you’re making your own ice cream, you’ve earned enough bonus points to use refrigerated crust. But you can totally use a homemade crust if you want to.

You want to start by making your custard base. I’ve tweaked the same base that we do for our Snickerdoodle Ice Cream and Cherry Chocolate Ice Cream. Combine some whole or 2% milk with sugar in a medium saucepan and heat it over low heat until it begins to bubble around the edges (don’t bring it to a full boil). While the milk is heating, whisk some egg yolks together in a medium bowl. When the milk has heated, pour half of it into the egg yolks, whisking constantly, Return the egg/milk mixture to the saucepan and and add some heavy cream Insert a candy thermometer and cook over low heat until the thermometer reaches 160 degrees and when, if you stick the back of a spoon into the custard and run your finger through it, your finger leaves a clear track. Like this: 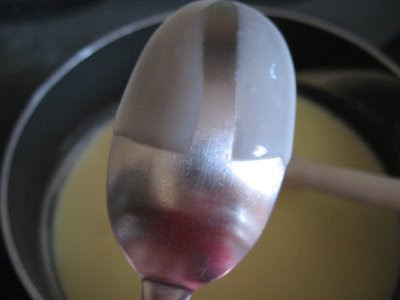 When the custard mixture is done, allow it to cool slightly and then refrigerate it several hours until it’s cold. This step can be done 2-3 days before freezing the ice cream.

To make the apple filling, preheat the oven to 400 degrees. Peel a few Fuji apples (my favorite for baking) and cut them into bite-sized pieces. Rub about 2 tablespoons of real butter onto an oven-safe dish or skillet (you want it generously slathered all over the pan). Mix some flour and spices in a small bowl and set aside. 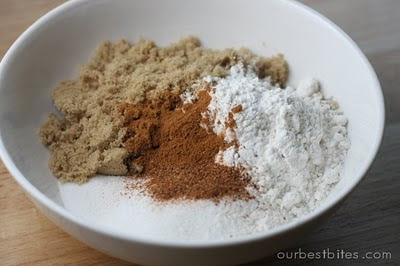 Toss the apples in some lemon or lime juice and then add the flour/spice mixture to the apples. 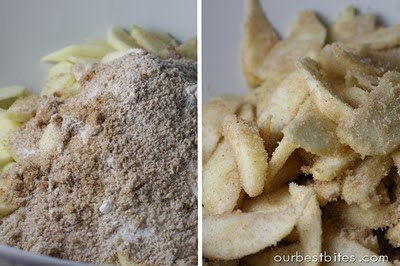 Place the seasoned apples in the buttered dish or skillet 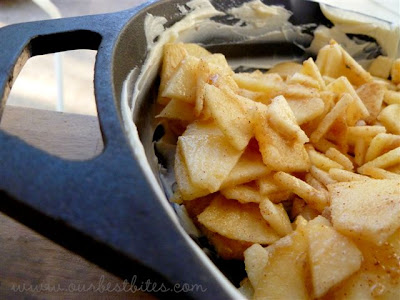 and cover the pan tightly with some aluminum foil. Bake in the preheated oven for 30-40 minutes or until the apples are tender and are in a thick syrup. Allow to cool. This step can be done 2-3 days before freezing; just store the cooked apples in an air-tight container in the refrigerator.

You can’t have Apple Pie Ice Cream without the crust, right?! So I just took 1 roll of refrigerated pie crust and unrolled it. I brushed the entire thing with melted butter 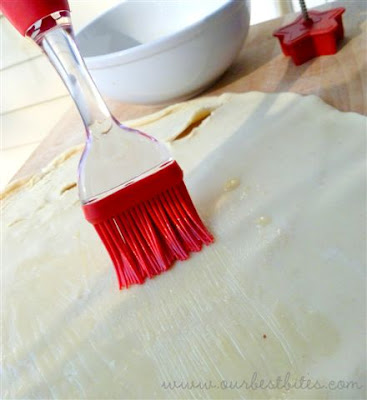 and sprinkled it with cinnamon sugar. 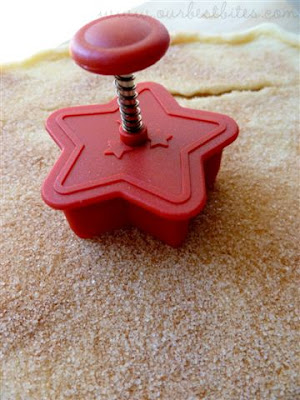 Okay, you guys are probably going to think we’re working for Williams-Sonoma on the side because we keep bringing up these adorable tiny cookie cutters. We’re not. We just love them sososososo much. I used them to cut out little star shapes, 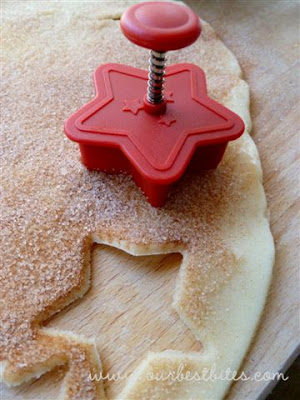 but you could even just cut these into strips or squares–in this recipe, if you can manage to get the entire crust into the ice cream, the better it will be. I actually added both the stars and the scraps.

Carefully place the cut-outs (or cinnamon-ly sugared dough) onto a parchment-lined baking sheet and bake at 450 for about 8-9 minutes or until they’re golden brown. This step should be done the same day you freeze your ice cream, but it’s the quickest and least labor-intensive step.

Stir the apples into the chilled custard and pour the mixture into your ice cream maker and freeze according to the manufacturer’s instructions. In the final minutes when the ice cream is almost done, add the baked pie crust pieces. Transfer the ice cream to a freezer-safe container and freezer for 3-4 hours or until it’s solid enough to scoop. 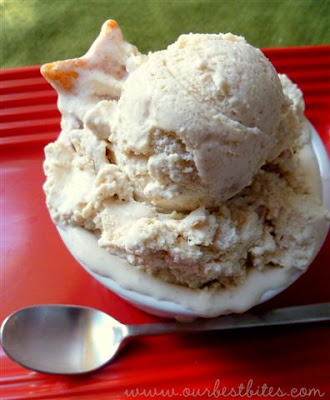 Recipe by Our Best Bites

Combine the milk and sugar in a medium saucepan and heat over low until bubbles form around the edges. While the milk is heating, whisk 2 egg yolks in a small bowl. When the milk has heated, slowly add 1/2 of it to the eggs, whisking constantly. When the mixture is fully mixed, slowly add the egg mixture back into the saucepan, whisking constantly. Add the heavy cream. Insert a candy thermometer and cook on low until the temperature reaches 160 degrees, stirring frequently. Remove from heat and add in the cinnamon and vanilla. Allow to cool and then transfer to an air-tight container and place in the refrigerator to chill. This step can be done 2-3 days before freezing.

For the apple pie filling, preheat the oven to 400 degrees. Generously rub a 9″ pie plate or a medium oven-safe skillet with butter. Peel the apples and chop into bite-sized pieces. Toss in lemon or lime juice. In a small bowl, combine the brown sugar, spices, and flour and sprinkle over the apples. Toss the apples in the flour mixture and then place them in the buttered dish. Cover with aluminum foil and bake for 30-40 minutes or until the apples are tender and syrupy. Allow to cool and then refrigerate until ready to use. This can be done 2-3 days before freezing the ice cream.

For the pie crust, preheat oven to 450. Brush a refrigerated pie crust with melted butter and sprinkle with cinnamon sugar. Cut into desired shapes or just into strips or squares. Place the crusts onto a parchment-lined baking sheet and bake for 8-9 minutes or until the pieces are golden brown. Remove from the oven and allow to cool.

When ready to freeze the ice cream, combine the apples and the custard. Pour the mixture into the ice cream maker and freeze according to the manufacturer’s instructions. When the machine is straining and the ice cream is almost done, add the baked pie crust pieces. Allow the machine to continue churning until the pieces are incorporated. Transfer the ice cream to a freezer-safe container and freezer 3-4 hours or until it can be easily scooped. This is awesome when you drizzle a little (okay, a lot of) Buttermilk Syrup over it!
For best taste, freeze overnight. This will keep for about a week in a freezer-safe container.

*If using an actual pie, just chop it into bite-sized pieces and add it to the custard when you’re ready to freeze the ice cream.