Sara and I may or may not have shared the story about how this blog came to be, but if we have, it was a long time ago and I’m sure there are some of you who haven’t heard the story.

My husband and I got married as broker-than-broke college students, so the summer after we got married, we went to Seattle, his hometown, so he could paint houses and we could save up some cash. The whole time we were there, I kept hearing about this magical Sara who went to church with my husband’s family, only she was living in Brazil at the time.

Well, fast-forward a few years when my husband’s little brother was dating Magical Sara, only she was doing an internship in California. I still hadn’t met her, but after a long weekend with my brother-in-law, I felt like I did because he literally did not stop talking about her the whole time.

Well, Sara and my brother-in-law broke up and married other people and I didn’t really hear about Magical Sara for awhile. A few years later, when my oldest was a few months old, I started posting occasionally on a mommy message board. There was a girl there who had pretty much the exact same taste in recipes that I did; we even had nearly identical recipes that we had each made up. Well, one day we started chatting a little and I realized she was Magical Sara (and she realized who I was; there was no one-way stalking here, although I will say that my internet stalking skills are exceptional). Over the course of a few years, we became good friends and recipe buddies and bam, a blog was born. I’m just glad it ended up being her and not some creeper with a taste for lime and garlic.

Anyway, the reason why I’m telling you all this story is because there are so many times when we each work on a recipe, post it on the calendar that we share, and realize that we have something nearly identical due to post within a week. Our brain-sharing is a gift. And a curse.

Take, for instance, Sara’s Baked Chicken Penne that she posted a few months ago. That recipe and this one were scheduled to post within literally one week of each other. They’re different enough to stand alone as their own recipes, but still, I didn’t think y’all needed 2 baked chicken Alfredo dishes in a 7-day period, you know?

One really great thing about this dish is that you can use up a whole bunch of leftovers all at once. Leftover grilled chicken? 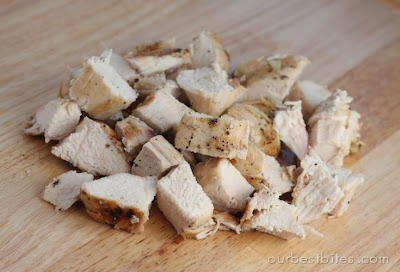 Made too much bacon (hey, it could happen!)? Have some cheese leftover from pizza night? Bought one of those double-packs of green onions at Walmart and the rest are about to go bad? You’re taken care of! 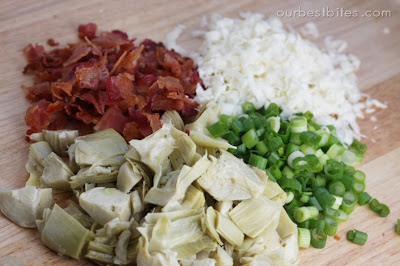 But if you don’t have all that stuff, just marinate some chicken breasts in a little Italian dressing for a few hours before grilling it, heat up your oven for some bacon, and you’re good to go. 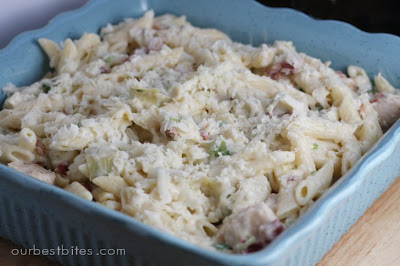 My other favorite thing about this is that it can be made ahead of time and either refrigerated or frozen until you’re ready to serve it. If you don’t plan on eating it immediately, cover tightly with plastic wrap and aluminum foil. If you cook it from the refrigerator, preheat oven to 400 and bake for 45 minutes or until cheese is melted and bubbly and the pasta is heated through. If you’re cooking it from the freezer, bake at 400 for about 90 minutes. 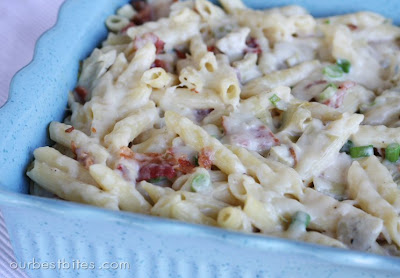 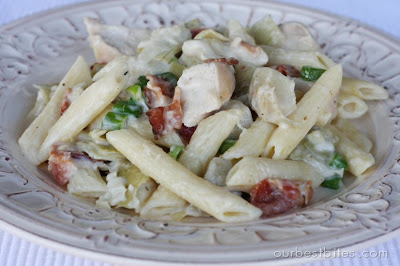 Preheat oven to 350.
Prepare pasta according to package directions. While pasta is cooking, prepare Guiltless Alfredo sauce. When pasta is done, drain and add to the sauce. Toss with chopped chicken, bacon, artichoke hearts, green onions, and 1/2 c. mozzarella. Season to taste.
Transfer mixture to an 8×8″ baking dish and sprinkle with remaining 1/2 c. mozzarella cheese. Cover with aluminum foil and bake at 350 for 20 minutes or until heated through and cheese is bubbly.
Serve with a green salad and breadsticks or a loaf of garlic bread made with Garlic Bread Seasoning.