We get a lot of emails requesting ideas for freezer meals.  This is another great one to make for a Valentines Day dinner.  I make a pasta dish quite often that is almost identical to this, only I use my Guiltless Alfredo sauce.  It’s actually become a Valentines Day tradition for my husband and I.  This version is a bit naughtier, and richer and completely delicious.  And the bonus is that it makes enough for 2 pans, one to eat and one to freeze.  It takes more time to make than my quick guiltless version so I like that when I put in the time to make it I get two meals out of it!  It’s a creamy cheesy sauce with penne pasta, sundried tomatoes, and mushrooms.  I don’t even like mushrooms and they’re fantastic here.

To begin, boil penne pasta in some salted water.  You’ll want to cook it just a couple minutes short of al dente.  Check the back of the box and it will tell you how long to cook until the al dente stage and just knock a couple of minutes off of that. 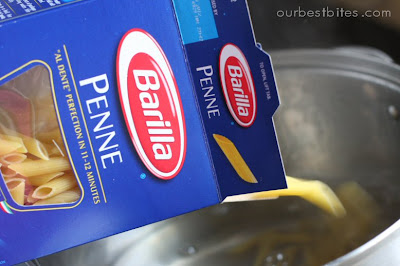 While the pasta is boiling heat up a skillet with a little oil in it.  Season your chicken with salt and pepper and then pop it in the skillet to sizzle up.  It will be done in about the same amount of time as the pasta.  After it cools for a minute, slice it up. 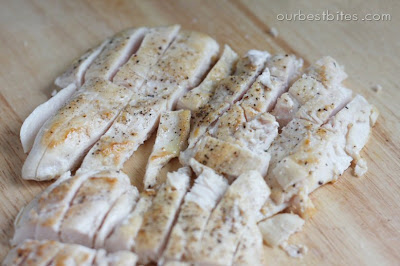 Since your skillet is already hot and oiled, toss the mushrooms in there to saute for a few minutes 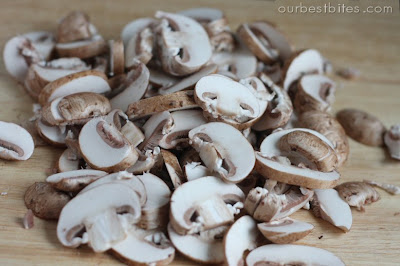 Now you’ll start making the sauce.  It begins with a roux.  That may sound like a scary word, but it’s not, I promise.  In a large pot you’ll melt some butter and then add some flour (to thicken) and some minced garlic (because everything is better with garlic) 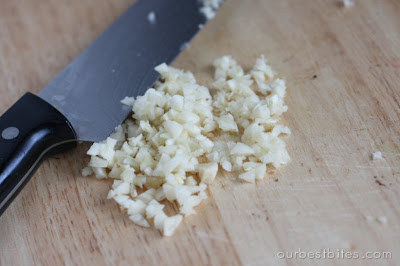 As you whisk that together to cook you’ll add in milk and bring it to a simmer to form the sauce.  Then you’ll throw in the mushrooms as some sundried tomatoes. 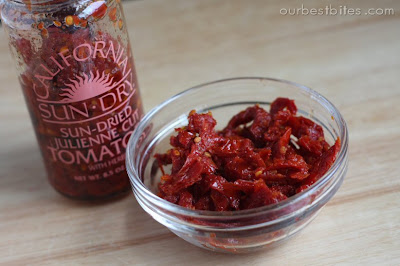 I seriously LOVE sundried tomatoes.  Just had to get that out.  Then off the heat you add in a mixture of parmesan and provolone cheeses, some salt and pepper, and  your chicken.    It’s that easy! 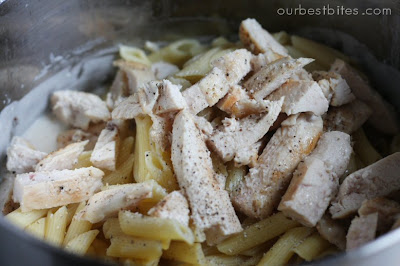 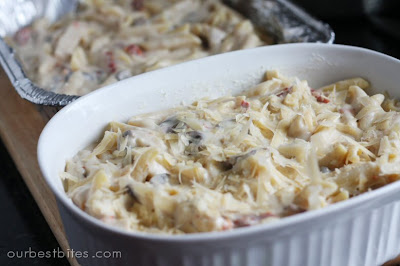 If your going to eat one now, then sprinkle more cheese on top.  If you’re going to freeze it, then put it in a baggie.

To eat immediately, just bake it for about 25 minutes so all of the flavors melt together and the cheese gets all bubbly 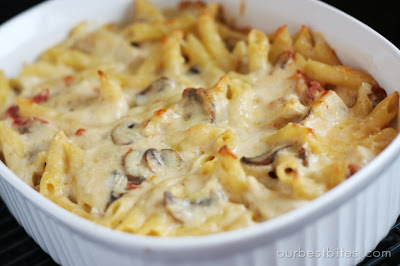 *Note on Cheese:
Sometimes provolone cheese can be hard to find.  I don’t always encourage the use of pre-shredded bagged cheeses (because ‘ve found they usually contain additives and therefore don’t melt or taste as good), but in this recipe I’ve used a *good* quality one, like Sargento, and it’s turned out great.  Actually in this batch I used Sargento’s Provolone/Mozzarella mix.  You’ll find that with packaged cheese mixes, provolone is often mixed with other white cheeses and that’s totally fine.  Just try to find one that is mostly provolone, like a 50/50 mix.  The other easy option is to go to the deli department where you can buy sliced cheese.  Just ask for a 6 oz chunk and you can grate it yourself.

To freeze, prepare through step 4 and then let pasta cool.  Cover pan well with plastic wrap.  Place extra cheese in baggie (for topping) on top and then cover entire pan well with foil.  Freeze for up to 3 months.  To bake, preheat oven to 400.  Remove foil and plastic from pan and set cheese baggie aside.  Place foil back on pan and bake for about 1 1/2 hours.  Remove foil, stir pasta, and top with cheese.  Return pan to oven and bake for an additional 15 minutes or until mixture is hot and bubbly throughout.

We hope you all have a wonderful Valentine”s day!  Make sure to tell all of your loved ones that you love them! (Oh, and eat lots of chocolate 🙂