So…when I was a little kid, I had a pet goldfish. During this time, my mom instructed me never, ever, ever to put my toothbrush down on the bathroom counter because I would surely get salmonella poisoning. Well, in the 29 years and 11 months that I’ve been alive, I’ve had fish for about 2 1/2 of those years, I do not currently have fish, and yet I am physically incapable of putting my toothbrush down on any kind of counter. In hotels. On counters that I have just disinfected. It’s a curse.

So remember a few years ago when a man became severely ill from lung-related complications because he ate too much microwave popcorn? In my brain, I know that I only eat microwave popcorn a few times a year, that it is a treat and by no means a habit, whatever. Yet the whole microwave popcorn has lodged its way into my subconscious the same way the goldfish thing did and I have since become nearly incapable of eating microwave popcorn. In my neurotic brain, it’s like eating wonderful, tasty death.

A few days ago, we received a comment from some wise, willful, wonderful woman (I don’t actually know if she’s willful, but we’ll give out an imaginary set of cookware to the first person who gets the reference) about how to pop popcorn in a brown paper bag. “Surely,” I thought, “this is a ruse.” I couldn’t believe I’d never heard of it before. I was convinced my lunch bag would burn. That there would be kernels, both popped and unpopped, all over my microwave. Then I googled it and stumbled across the fact that Alton Brown subscribes to the same method. Except that he staples his bag shut, which I canNOT wrap my brain around–I don’t care if he is Alton Brown, my microwave is the last vestige of wedding appliances and kitchenware that is still functioning, and it also looks like some kind of alien communication device, and I am not prepared to part with it over a couple of staples.

So then I went digging through my freezer for my popcorn, but then I realized that in June, during one of the darkest, most horrible nights of my life when my tooth abscessed and I thought I was going to die (to the point where, on top of about 8 ibuprofen, I drank some mouthwash in the hopes that it would take the edge off the pain, but not to the point where I considered calling our dentist friend before the semi-reasonable hour of 6:00 am), I used the frozen popcorn as a sort of ice pack. Not totally sure why I didn’t just use ice–maybe it was the mouthwash talking. In an effort to expunge all memories of that horrible night, I think I tossed the popcorn. So I had to send my husband out in the almost-middle of the night to buy popcorn so I could try this out. And it WORKED! I was amazed! And so relieved that I wasn’t going to die of some lung- and popcorn-related ailment from my 2-bags-a-year popcorn habit.

So what do you need? Popcorn. Salt. Butter. At least if you’re me–I’m kind of a purist that way. 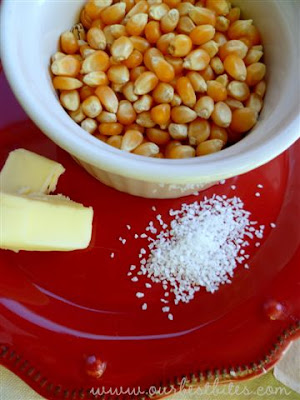 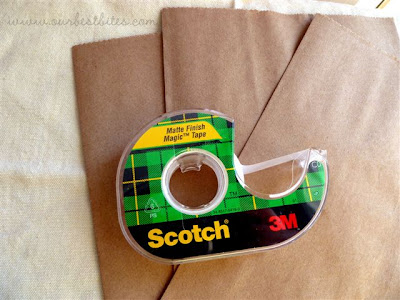 I’m pretty sure you don’t even have to tape the bags, although I tried it out several ways and had the best success with the taped bag. Again, I didn’t even venture into staple territory.

Alton recommends using oil, but I tried it both ways and I didn’t notice a difference in the taste between the oiled and non-oiled popcorn, but the non-oiled popcorn was virtually fat free, lower in calories, and less messy. So it gets my vote.

All you do is place 3-4 tablespoons of unpopped (duh, but it had to be said, right?) popcorn into a brown paper bag. Then you fold it over twice, 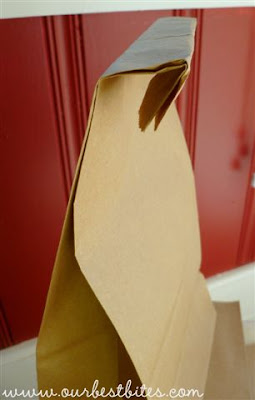 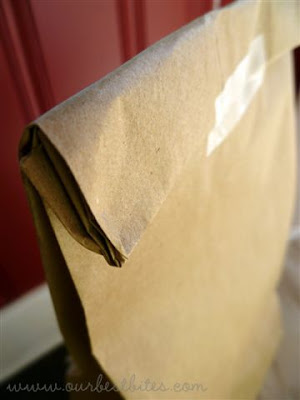 I pushed the air out–not in an obsessive, vacu-seal type of way, I just laid the bag flat on the table and pushed it once or twice. Then I laid it in the microwave and popped it for 2 1/2-3 minutes. 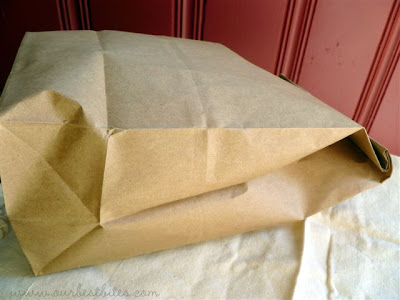 It varied every time, even in my microwave, but it’s the same rule as regular microwave popcorn: once the popping slows down and you hear 1-2 seconds between pops, pull it out and shake it a few times and then carefully open it.

Then I added about a teaspoon of melted butter, a sprinkling of kosher salt, and we had an easy, neurosis-free snack in just a few minutes! 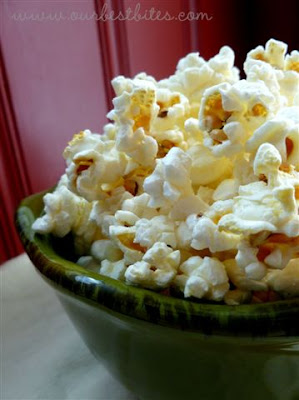 1/4 c. of unpopped popcorn is a great-sized (like, you could share and not be sad) high-fiber snack, and it only has 130 calories. A teaspoon of butter adds another 30-35 calories. You could add flavored salts like seasoning salt, Cajun or Creole seasoning, or even our Garlic Bread Seasoning. So how is that for the coolest thing you’ve seen today? Or maybe I just need to get out more… 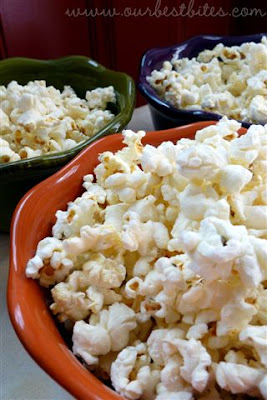 Brown Paper Bag Microwave Popcorn
Recipe on Our Best Bites, courtesy of Linda, our Cool Reader of the Day

Place unpopped popcorn in the brown paper lunch bag. Fold the bag over twice, tape it shut, and gently push the air out. Pop for 2 1/2-3 minutes or until there are 1-2 seconds between pops. Remove the bag from the microwave and shake gently before carefully opening the bag. Season as desired.