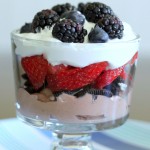 Have you ever noticed that trifles are so often made with vanilla pudding and vanilla wafers or shortbread or angel food cake? Where’s the chocolate? I know there are people out there who don’t like chocolate, but they are few and far between. There are, however, LOTS of people who think trifle is weird or old-fashioned or just gross. Maybe that’s because, and I’m just hypothesizing here, there is a serious lack of chocolatey goodness in the trifle world.

I’m here today to change that. It involves Oreos and chocolate pudding, which means you can’t possibly go wrong. Unless you don’t like chocolate–then you’re just plum out of luck.

Now…you can either do this as one big trifle in one big trifle dish, or you can do lots of little trifles. From a logistical perspective, it’s significantly easier to put it in one trifle dish, especially since it has so many layers. But from a beauty and photography perspective, it’s not super easy to take a picture of a large trifle and have it not look disgusting, so for the sake of prettiness, I did it in smaller trifle dishes. You could also use jars, and you guys know how we love jars, but since I just posted a dessert in a jar, I figured I’d live on the edge a little.

In a medium bowl, whisk together the water, pudding mix, and sweetened condensed milk. Let it chill out in the fridge for a few minutes while you whip the cream with an electric hand mixer until soft peaks form. Gently fold the whipped cream into the pudding mixture until it’s combined and smooth. Refrigerate the mixture until ready to use.

In another medium bowl, whip together 8 ounces of softened cream cheese and 2 8-ounce containers of thawed Cool Whip (you can also use 16 ounces of heavy cream whipped with 1/2 cup powdered sugar). Refrigerate until you’re ready to use.

Or heck, chop up all of them and then you can snack on the tiny Oreo pieces because the calories fall out when you cut them. Truth.

You’ll also need to wash and slice a pint of strawberries and wash about 2 cups worth of blue-ish berries (I used blueberries and blackberries). If you’re a food blogger, it would be awesome of you to take a picture of said berries that didn’t come out blurry, but alas, life does not always come out the way we want it to.

Now…you can layer this however you want to. In the smaller dishes, I did a layer of chocolate pudding…

Then I added some chopped Oreos…

Then topped it off with a layer of blueberries and blackberries.

If you’re going to make this in a large trifle dish, feel free to layer things however you want and repeat the layers until you run out of ingredients or room; I just recommend ending with the blueberries on top of the COOL WHIP layer because it seems to be the prettiest combination. This a seriously delicious make-ahead red, white, and blue (plus chocolate) dessert for Memorial Day or the 4th of July, but really, when berries are cheap and awesome, it’s perfect all summer.

Disclaimer: This post was sponsored by COOL WHIP, but, as always, our opinions, recipes, and ideas are completely our own.