People ask me all the time how I come up with recipes.  Sometimes I base things off of foods I’ve tried somewhere and try to replicate, sometimes it’s just blending flavors that sound good together, sometimes I daydream about food, sometimes it’s completely accidental, and often- it just happens out of necessity!  This is one of those out-of-necessity recipes.  I was in serious need of a grocery store trip (which are getting few and far between now that I’m a mother to 2 toddlers and a newborn- all boys.  Most days I’d rather pull my own fingernails off than take all three of them to the grocery store.)  I looked in my fridge and had a little left over rice from the night before, a few extra black beans from when I didn’t use a whole can, etc.  I didn’t want to put spicy salsa in it since it was for my kids, so I used bbq sauce instead- and they were a huge hit!  I finished it off with a BBQ-Ranch dipping sauce, mostly because the chance of my kids eating what I cook significantly increases when there’s some sort of dipping sauce involved.  This is a super quick and easy weeknight dinner, snack food, or appetizer.

Let me show you how I did it:

You can definitely adjust this to what you have in your fridge, but I used white rice (leftover is best, because what do you use leftover rice for besides fried rice?), black beans, diced cooked chicken (I always keep a bag of pre-cooked frozen chicken strips on hand), fresh frozen corn (I personally don’t like canned corn, and I like that with a bag of frozen corn you can use a little or a lot), diced tomato, (you could drain a can of tomatoes instead if you needed to), and sliced green onions. 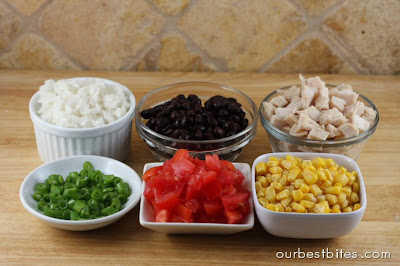 Toss it all together in a mixing bowl 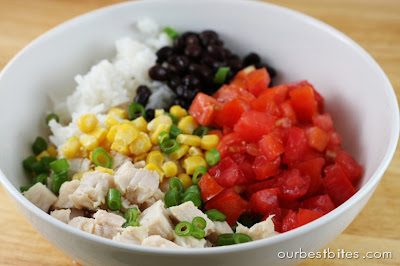 And add some cheese.  I had some sharp cheddar and Gruyere (left over from making this) but really any cheese works.  Cheddar, jack, pepper jack, colby.  It’s less the flavor we’re concerned with and more of the ooey, gooey, make-the-quesadilla-stick-together-ness that we’re going for. 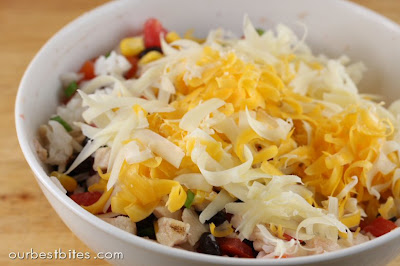 Mix that up and then add a little bbq sauce.  The great thing about bbq sauce is that it’s all the flavor you need!  No spices to measure out here. 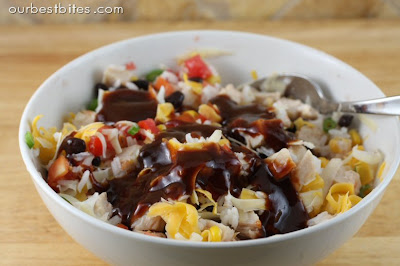 Place the mixture on half of some small tortillas 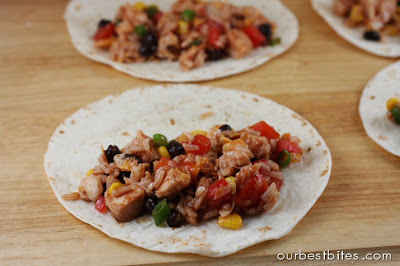 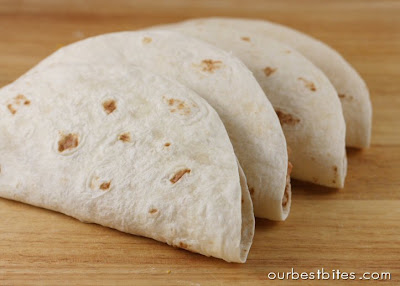 Grill them up in a hot skillet until they’re golden browned and crisp on the outside and warm and cheesy in the middle and serve with a creamy bbq dipping sauce. 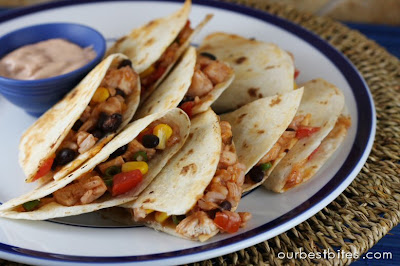 My cowboys approved.  And they didn’t even know they were eating vegetables, so next time I’m definitely going to sneak some more stuff in there!  Also, if you’re making these for little fingers, you might find it easier to roll them burrito style with the ends tucked in so the filling doesn’t fall out. 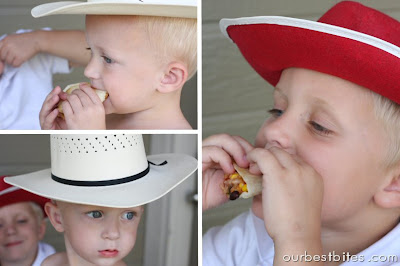 Combine rice, beans, chicken, corn, tomato, green onion and shredded cheese.  Add bbq sauce and stir to combine.  Place about 1/3 C of mixture on half of each tortilla and fold over to close.

Heat a skillet to medium heat on the stove top.  When hot, spray lightly with cooking spray, or drizzle with canola or olive oil.  Place quesadillas in pan and cook for 2-4 minutes or until golden brown and slightly crisp.  Flip and repeat on opposite side.  Cool for a few minutes and then serve with BBQ-Ranch dipping sauce.