Chewy Almond-Coconut Chex Mix - Our Best Bites
Skip to content
Home » Recipes » Course » Desserts » Popcorn & Snack Mixes » Chewy Almond-Coconut Chex Mix
Published: 10/06/2009Updated: 03/11/2021Author: Kate Jones
This post may contain affiliate links. Read our disclosure policy.
First of all, have you checked out our Halloween Party Food Post?? It is full of amazing (and easy!!) ideas! I mean, hello Mummy Dogs and creepy finger cheese! On the less spooky side, this is one of my favorite party foods ever. I’ve met lots of people who have a recipe for this and none of us have a good name for it. I got it from my childhood piano teacher who called it “Cereal Gooey Stuff.” I’ve heard it called “Moose Munch” and “Cereal Crack” and “Reindeer Droppings.” My step-mom, much to my humiliation, called it “Meow Mix” when I was a teenager:

Kate’s Stepmom: Hey, girls, would you like some Meow Mix?
Bratty Teenage Kate: [Hides head, utterly convinced she will die of embarrassment.]

So, in the spirit of Halloween, I’ve named this Goblin Grub, but the remaining 11 months of the year, you can probably call it Chewy Almond Coconut Chex Mix. Or something related to drugs or something semi-gross involving animals, that’s cool, too. 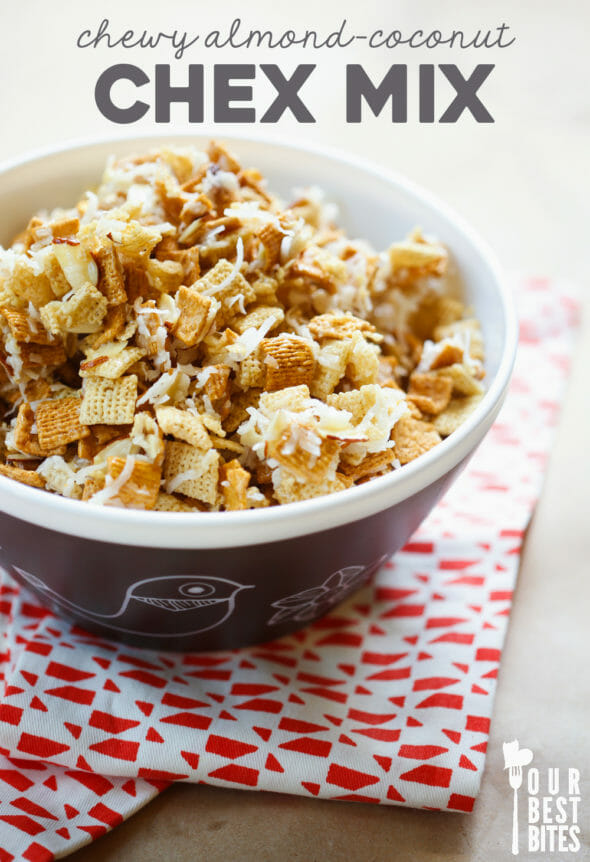 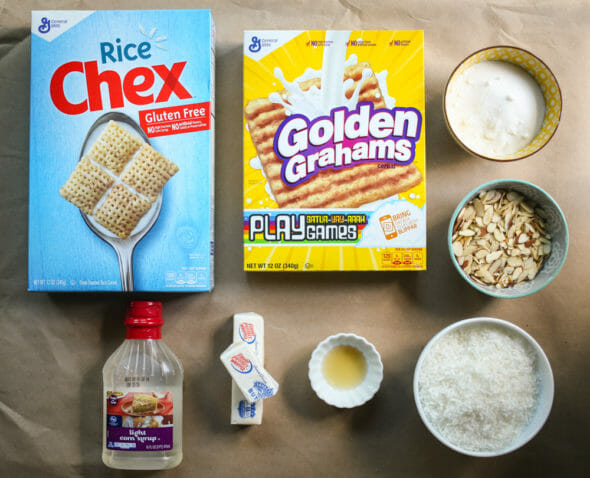 Place the cereal, almonds, and coconut in a VERY LARGE bowl (or even a cookie sheet. 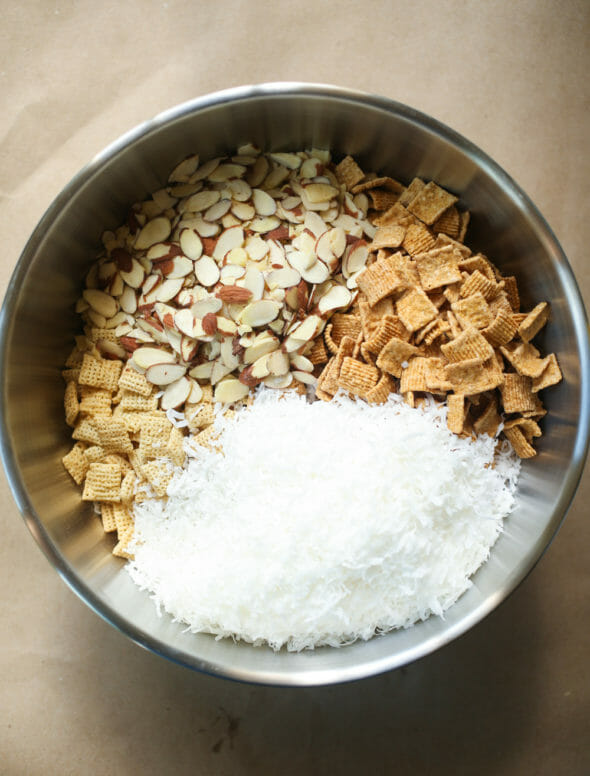 Toss them together and set aside. 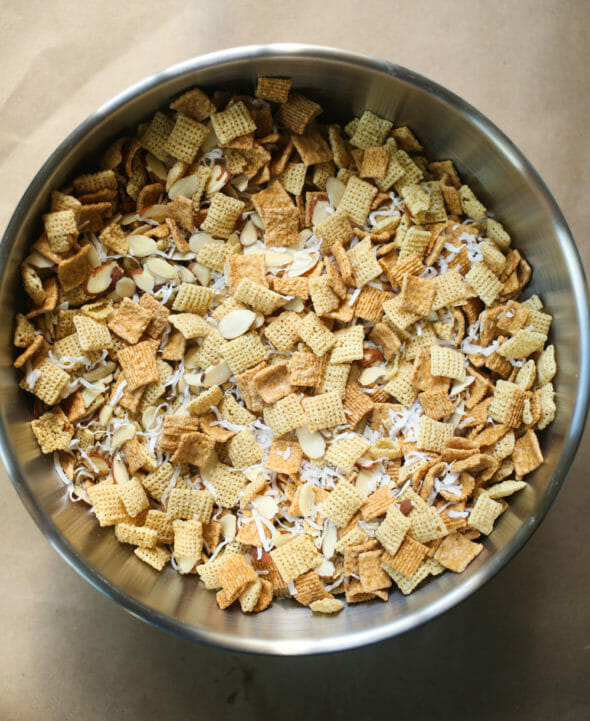 In a large saucepan, combine butter, Karo syrup, and sugar. Bring to a boil, reduce heat, and cook for three minutes. Remove from heat and stir in vanilla. While the mixture is still hot, pour over the cereal mixture 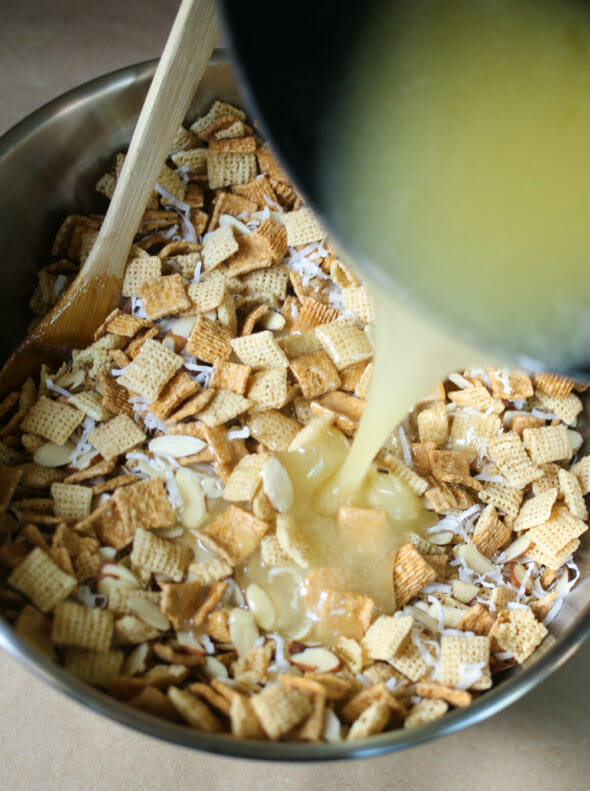 and stir well so the candy mixture coats the cereal. 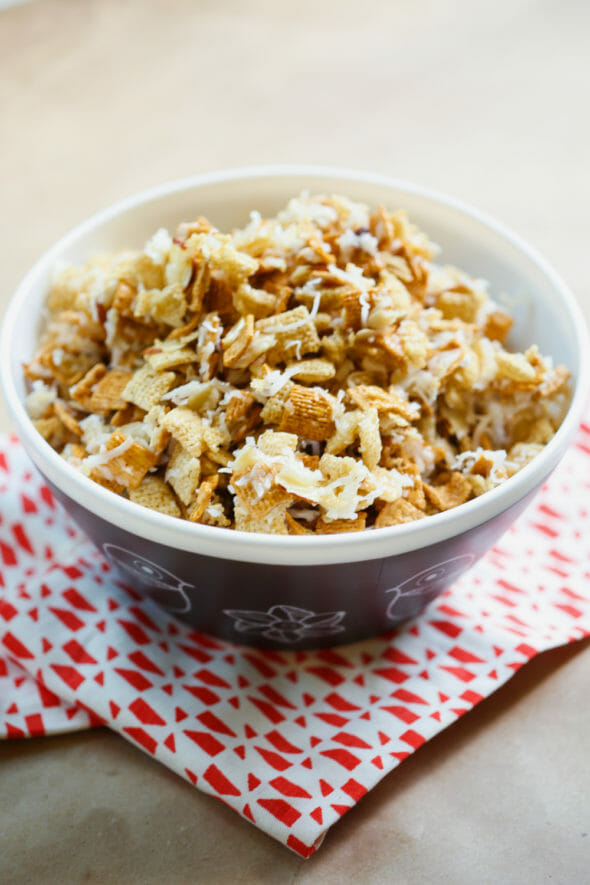 Try keeping your fingers out of it until it cools a little. You can serve it in a bowl like this, but dividing it into individual portions isn’t a terrible idea (because it’s so sticky and also because it’s so addictive.) 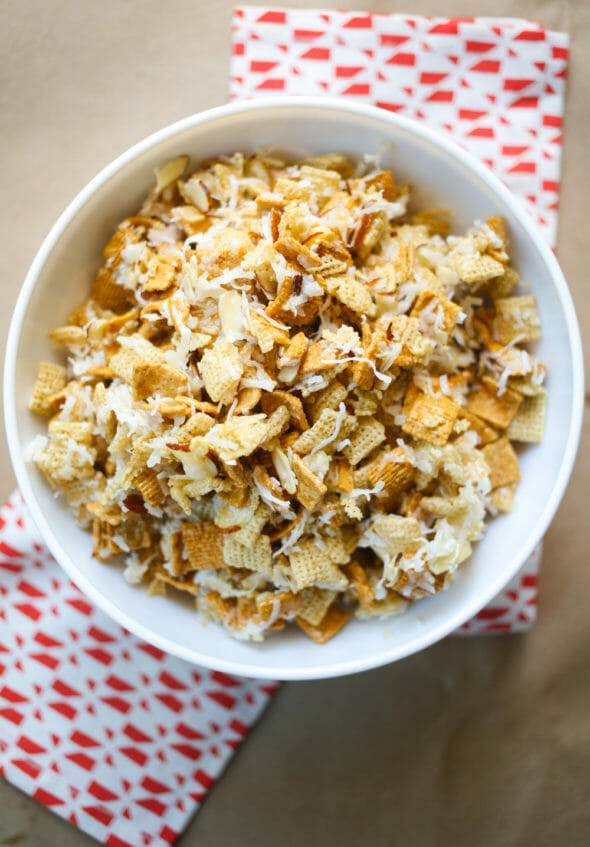 This Chewy Coconut-Almond Chex Mix is perfect for parties or a family treat!