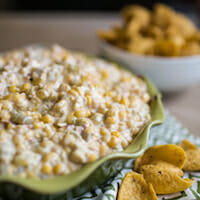 So I have this friend Kelly. She’s a Louisiana gal. And for as long as I’ve lived here, we have frequently worked together in the same organizations at church (first it was with the teenage girls and now it’s with the little kids.) And I swear, for as long as I’ve known her, every Sunday, we sit and have at least one conversation about food. And sometimes TV shows. It’s a relationship built on honesty.

So last week, she started telling me all about this dip she makes and the more she told me, the more I KNEW I had to make it. Just based on ingredients and her enthusiasm. I am very prone to suggestion.

One thing that’s kind of fun about this dip is that you can add (or subtract) things depending on your taste and your target audience (like maybe tone down the heat if little kids and sensitive souls are involved), but, according to Kelly, serving this dip with Fritos is non-negotiable. It’s a deal-breaker. And she can be kind of scary sometimes, so I took her word for it and I believe her now. Fritos for the win.

You’re going to need 4 cans of seasoned corn (I agonized about this, but it kind of ended up not mattering. There’s a lot of stuff going on here), 2 7-ounce cans of green chiles, 1 bunch of green onions, chopped (they didn’t make it into the picture), 1 cup mayonnaise (light is fine, but not Miracle Whip or fat free mayo), 1 cup sour cream (light is fine, but not fat free), 2 cups shredded cheese (cheddar, pepperjack, Mexican blend, or a combination–next time, I think I’ll do half medium or sharp cheddar and half pepper jack), Cajun seasoning to taste (I use Tony Chacheres–it’s inexpensive and widely available), and jalapeño or chipotle Tabasco sauce. You can also add about 6-8 slices of cooked, crumbled bacon and/or 1/4-1/2 cup of pickled jalapeños, drained and chopped. 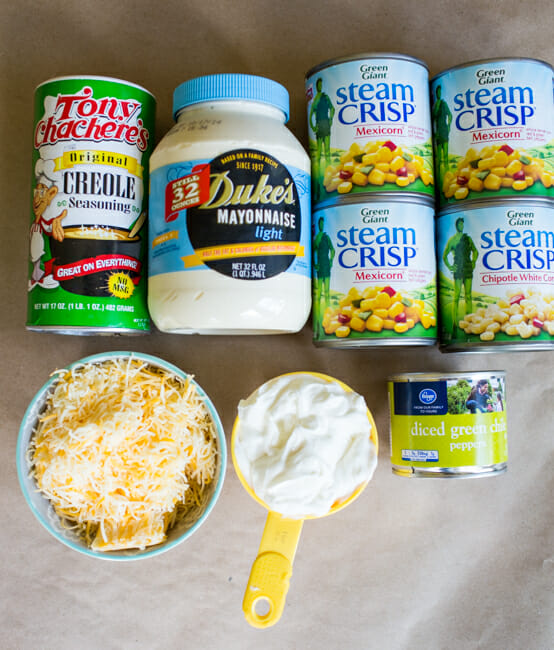 In a large bowl or serving dish, toss together the corn, 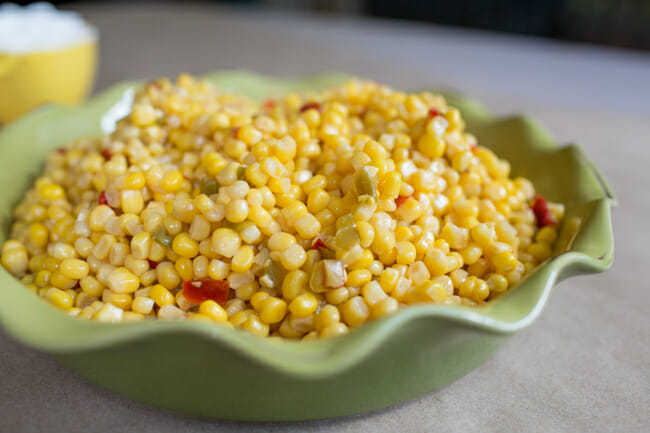 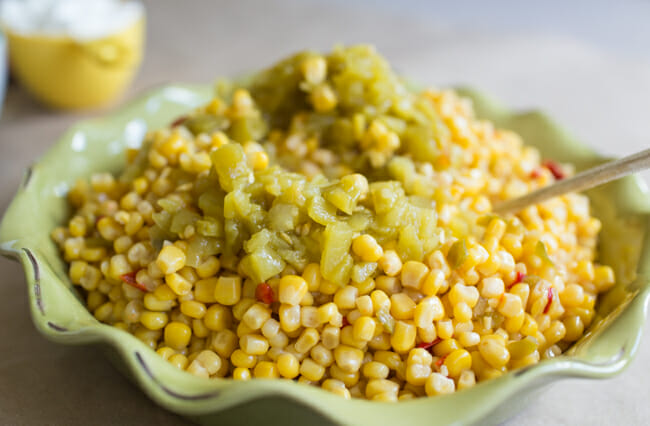 and chopped green onions. If desired, cook some bacon (I just heated up some of that Hormel pre-cooked bacon) 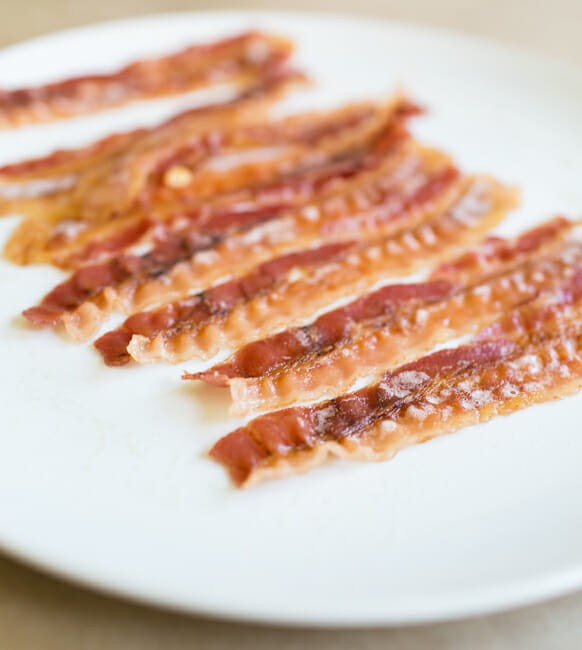 and crumble it up, or throw in some chopped, pickled jalapeños. At this point, I ran out of room in my pie plate and transferred everything to a mixing bowl. My spatial skills really leave a lot to be desired. 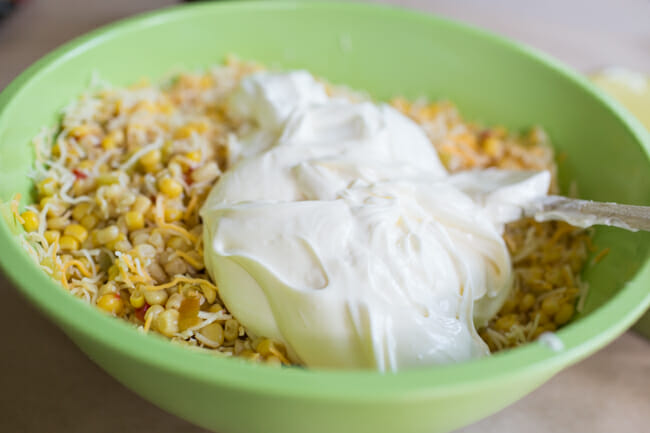 and shredded cheese and stir to combine. Season to taste with Cajun seasoning (for heat and saltiness) and flavored Tabasco (for heat.) The chipotle and jalapeño Tabasco sauce flavors are easily my favorites–they aren’t nearly as spicy as regular Tabasco and they’re packed with flavor. I used chipotle this time around, but jalapeño would have been equally delicious. 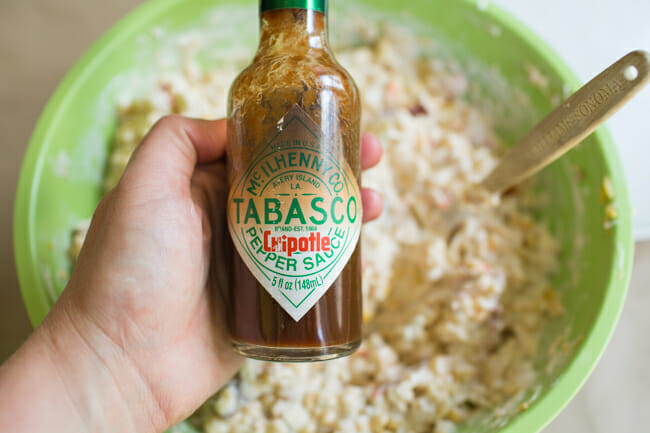 Cover and refrigerate for at least 4 hours. Top with a sprinkling of Cajun seasoning or crushed Fritos (or both…) 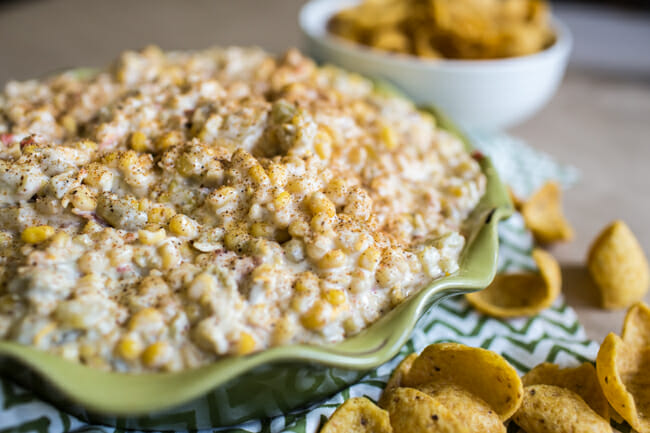 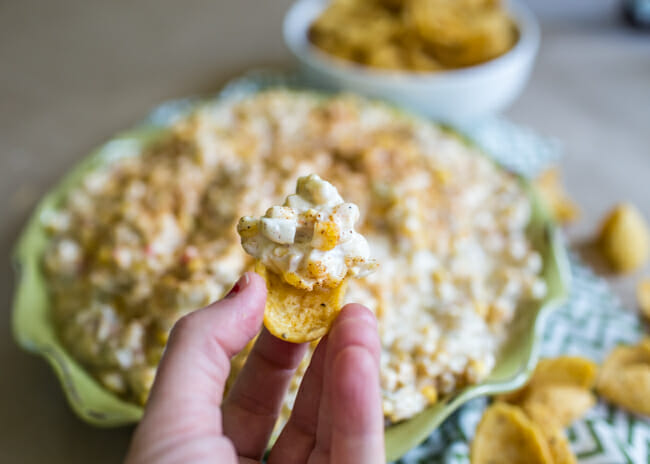 Makes a lot. But that’s okay because it’s highly addictive. 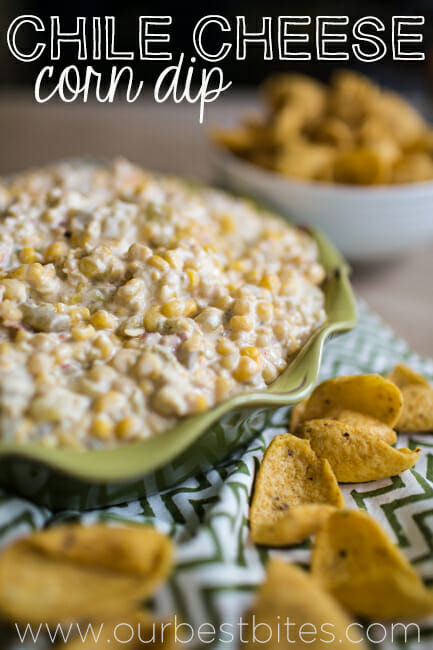 In a large bowl or serving dish, toss together the corn, green chilies, and chopped green onions. If desired, add crumbled bacon and pickled jalapeños. Add the mayonnaise, sour cream, and shredded cheese and stir to combine. Season to taste with Cajun seasoning (for heat and saltiness) and flavored Tabasco (for heat.) Cover and refrigerate for at least 4 hours. If desired, sprinkle with additional Cajun seasoning and/or crushed Fritos before serving. Serve with Fritos. Makes a lot.