Science has been telling us for years (ya know, because me and science are tight) how important it is to eat a good breakfast in the morning, but for a lot of people that’s difficult for a number of reasons. A major one being that you just don’t have the time, period.

When I was pregnant with my first baby, my doctor told me in order to curb the rapid weigh-gain I was experiencing, I needed to replace my standard breakfast of fruit and yogurt (I was trying to be so good!), with something protein-rich likes eggs and bacon or sausage. Seriously? (I think that was actually my exact response) While I really didn’t mind cooking in the mornings, I was working full-time at a job that required me to wake up at an insane hour (4:30am!) and there was noooo way I was going to be whipping up an omelet before heading out the door. I needed something I could grab and go, and then heat up like 4 or 5 hours later when the normal people of the world were eating breakfast. I toyed around with breakfast casseroles that I could cut up and freeze, but those were far from healthy. So I came up with a little egg/cheese/veggie mixture that I baked in muffin tins. It was lean, protein rich, and included some vegetables which I otherwise wouldn’t be eating in the morning hours. It worked so great. I just kept them in a container in my fridge, or even froze them, and grabbed one as I headed out the door. These are great for kids in the mornings, or to take to work, or just to have at home for breakfast or a healthy snack.  And my new favorite variation is to bake them in a little ham cup instead of a cupcake liner. It adds protein, flavor, and heck it just looks fun.
This is the combo I’ve been making lately, but these are so flexible. You can switch up everything. I really love them with bacon (isn’t everything better with bacon?), and they’re awesome with red peppers, green chilis, and pepper jack cheese. Play around with everything from the cheese to the add-ins to the egg-ratio, and find a combo you like. If you come up with a good one, come back and share!


Couldn’t be easier.  Just combine all the ingredients and whisk together.  I’ve found that even with greased, these stick horribly to the muffin pan so I like to use foil liners.  You’ll need to remember to take them out of the liners before re-heating, but they work well for baking. 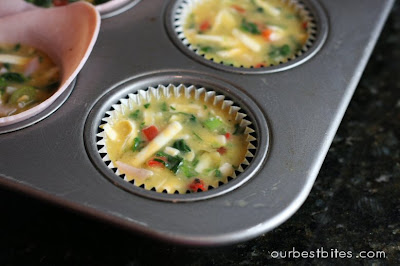 Or as I mentioned, in place of a liner you can use a piece of thinly sliced ham.  Even just the cheap stuff from the lunch meat section works great.  Just stuff it in the muffin tin and create a little bowl and then fill it with egg mixture. 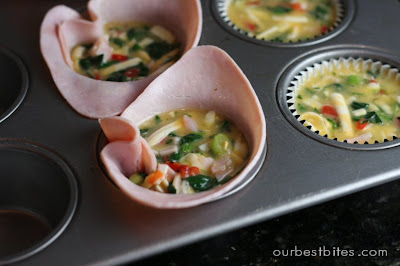 Bake them until they puff up nicely and are just barely set on top.  Overcooked eggs are spongy and gross, so don’t go crazy and let them cook too long. 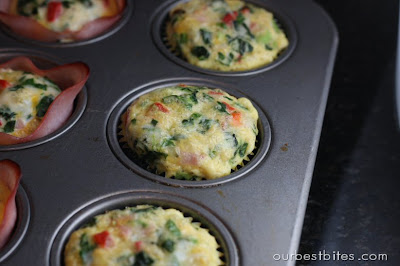 As soon as they’re cool enough to handle, pop them out of the tin and eat!  Or you can let cool completely to room temp and freeze and just reheat one at a time in the microwave.  Store leftovers in the fridge.
Mini Breakfast Quiches/ Baked Ham and Egg Cups
Recipe by Our Best Bites

foil muffin tin liners OR 12 slices ham
*1/4 egg substitute = 1 whole egg, so if you’re using all eggs, or some eggs and some egg whites, you can adjust accordingly.
Directions:
Preheat oven to 350
In a bowl, combine all ingredients (except ham slices) and stir well.
If using ham slices, spray muffin tin with non cook spray and place one piece of ham in each well to form a bowl.
If using foil muffin liners, spray the insides of the liners with non-stick spray.
Evenly divide egg mixture between the 12 muffin wells (about 1/4 C each), being careful to keep ingredients well dispersed.  You want them to fill right up to the top.
Place in the oven and bake for 15-20 minutes. The tops should be puffed and just barely set on top. Eggs will sink after cooling.
Store them in an airtight container in the fridge, or freeze them. When reheating in the microwave, make sure to take off the foil liner! And if you’re reheating from frozen, I try to take them out the night before so they can thaw in the fridge. Then when you microwave them, set them on a folded paper towel to drain excess moisture.
Eat them alone, or for a well-rounded breakfast crumble on top of a piece of whole grain toast along with a glass of milk and a piece of fruit. Makes 12.
Nutritional information for 1 mini-quiche (w/o ham):
83 Calories, 7.5 g Protien, 3 g fat
2 Weight Watchers Points
Southbeach Diet Phase 1 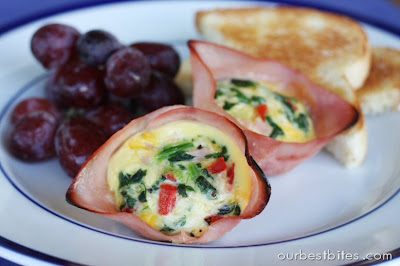