I’ve had Monte Cristos on several occasions in my life; nearly all of them while at some eating establishment with the word “diner” in the title and where someone says “You’ve got to try their Monte Cristo”.It never occurred to me to try these at home until my friend Dawn, who is a great cook, invited me over for lunch last month and whipped up a bunch of these sandwiches.They were so yummy and it inspired me to make them at home for my family too- so thanks Dawn!

If you’ve never had a Monte Cristo Sandwich and you’re looking at the ingredient list thinking I’ve made a dreadful mistake, guess again!A Monte Cristo is an interesting concoction; basically a ham and cheese melt on French toast.Sound strange?It’s one of those things that sounds strange, but tastes oddly delicious!If you love a sweet and salty combo you’ll love these. My husband had never tried one before, and both he and my 2-year old thought they were awesome.But then, what 2-year old (and 20-something year old) wouldn’t like to sprinkle sugar over their dinner??This is actually a great meal that could be served for breakfast, brunch, lunch, dinner, or a snack.

Whisk flour and milk and then add in eggs and whisk until well-blended and place in a shallow dish.Now this isn’t rocket science- basically you want to put the cheese and the meat on the inside of the bread, then dip both sides of the sandwich in the egg/milk mix, then grill in a hot buttered skillet until the bread is browned and toasty and the cheese inside is melted.Sprinkle with powdered sugar and serve with Jam. Done.

However, I’ll tell you how I find it easiest to do.When I tried to build the sandwich first, and then dip it, it was hard to keep everything together and I had egg stuff dripping all over. Apparently I’m not as coordinated as Dawn is because that’s how she did it and it looked effortless! 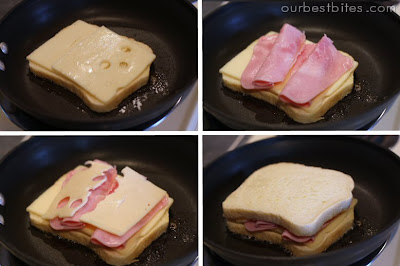 Let the sandwich sizzle for a few minutes until the bread on one side is nice and brown, and flip.

To serve, slice in half and sprinkle with powdered sugar.I like it served with the classic strawberry jam.I place a little bowl on the side, but you can just grab a knife and slather some on the inside too.When I had these at my friend’s house in addition to the jam, she also had maple syrup andDijonmustard (not to be eaten together- just to pick one or the other!)So it’s really up to you and your preference. 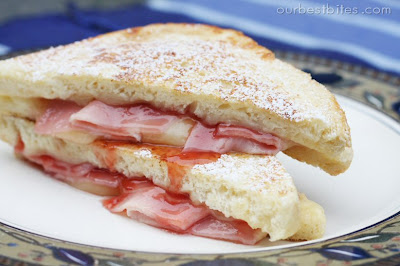