Every year around this time we get loads of requests for Peach Cobbler.  And after some questioning, people always explain that they like their peach cobbler with a crispy crumbly topping (as opposed to a cakey style biscuit one.) So I gather that in reality, most of the requests coming in are for Peach Crisp and not Peach Cobbler.   Which is great for me, because I’m a crisp girl myself.  In fact, I’d say that’s one of my favorite (and most made) desserts in the summer and fall months, especially.  With a good crumb topping, you can take just about any fruit and create a rustic dessert that’s very open to interpretation and adaptation and tastes heavenly piled on top of a cool bowl of ice cream.  This time of year, you can usually find peaches in abundance, and for a great price.  In my local stores right now, the peaches are much less expensive than apples! 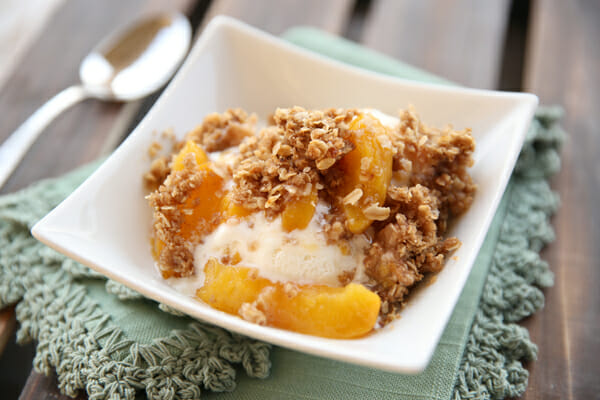 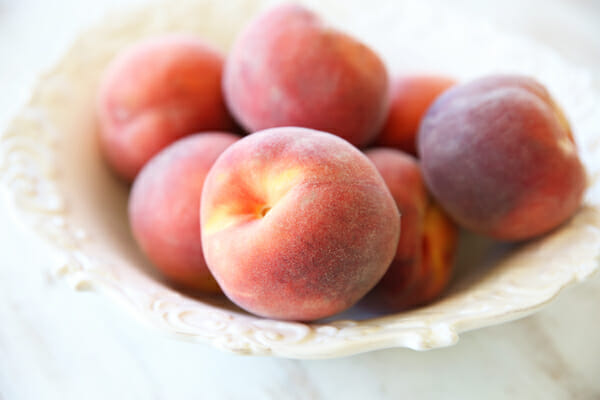 While I say any fruit can be used in a crisp, one specific problem that comes with peaches in particular, is that in dishes like this they produce so much moisture that you almost always end up with a soupy, watery mess.  That is unless you add high amounts of thickeners, like flour, and then instead of a soupy watery mess, you have a goopy gloppy mess.  Most recipes also call for a ridiculous amount of sugar, which makes it nearly impossible to taste the fresh sweet tang of the actual fruit.  You’ll see this recipe calls for a very small amount of sugar; just enough to heighten the flavor of the natural fruit-letting those peaches be the star of the show. 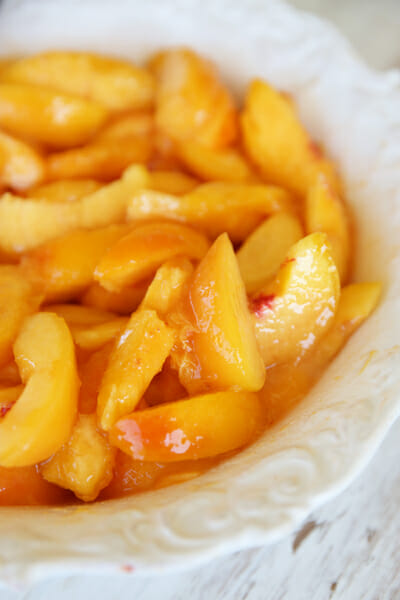 This recipe combats the soupy juice problem by macerating the peaches first.  Just like you toss strawberries with sugar to create the sweet syrupy sauce for strawberry shortcake, tossing peaches with sugar draws out their juices.  That way we can use just what we need and leave out the rest, producing a crisp that’s not watery at all, but instead has a light sauce and holds together nicely.

Start by peeling those peaches.  Click Here for a tutorial on the easiest way to do that.  After pitting and slicing, toss them with a little sugar. 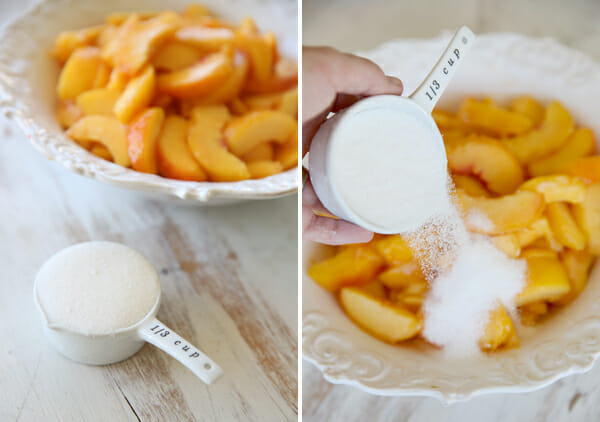 Let the peaches sit in a bowl for about 30 minutes, giving them a gentle toss a few times during that process. 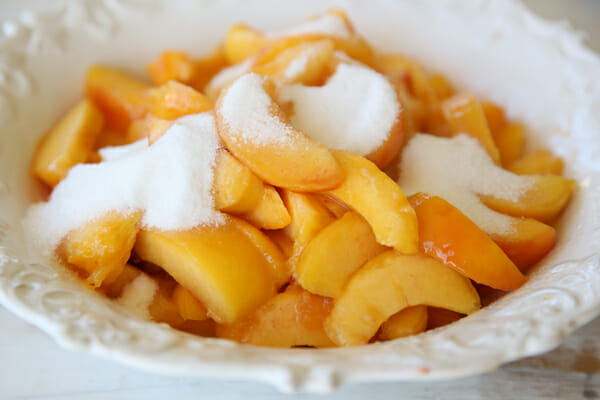 You’ll see they leach out quite a bit of peach juice.  Place the peaches in a colander over a large bowl and drain off all the juice.  Mine produced about a cup and a half of juice! 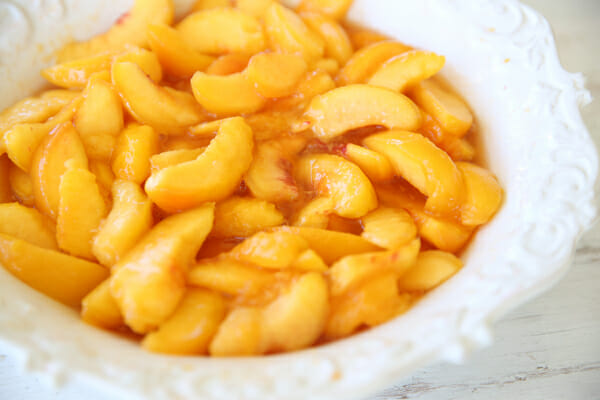 We’re only going to use 1/4 cup of those juices.  You can use the rest in a smoothie or toss them down the drain.  Or let your kid drink it right out of bowl.

Mix the peach juice with a little corn starch, some fresh lemon juice, and a pinch of salt, cinnamon and nutmeg. 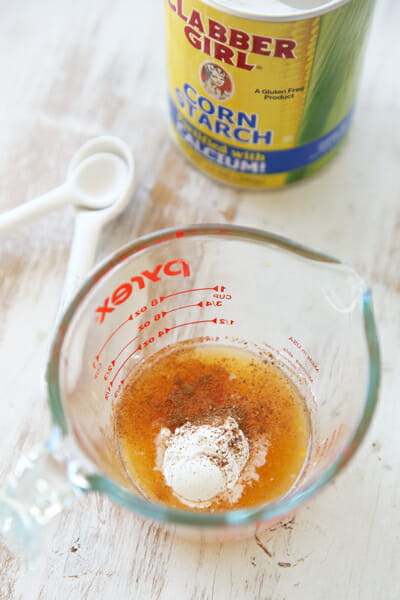 Toss the peaches with that mixture and place it in a baking dish.  I like to use a 9×9-ish pan, but anything close to that is fine.  If you want to make this in a 9×13, I’d double or at least 1 1/2 the recipe as written.

For the crumbly crisp topping, combine some oats, brown sugar, flour, cinnamon and nutmeg.  Either cut in chunks of cold butter, or use a large-holed cheese grater  to grate it right in.  I know, it looks like shredded mozzarella.  It’s not.  I swear. 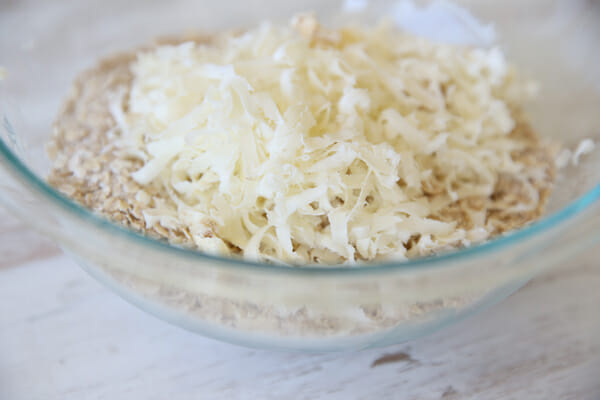 Then use clean hands to crumble the mixture together so you have little pebbles of butter. 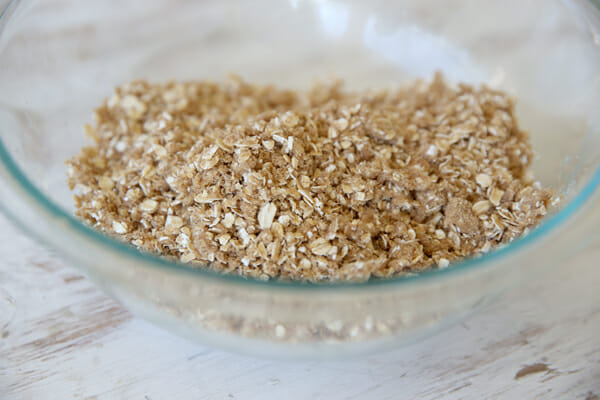 Pour it right over the peach mixture and then bake the pan in the oven. 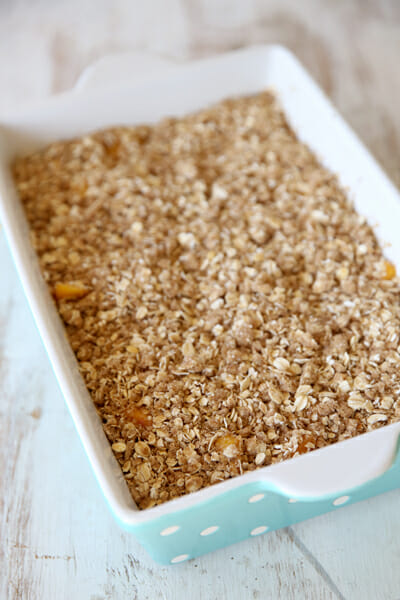 I watch for the topping to become golden brown and toasted looking, and for some of the peach mixture to start bubbling through the edges. 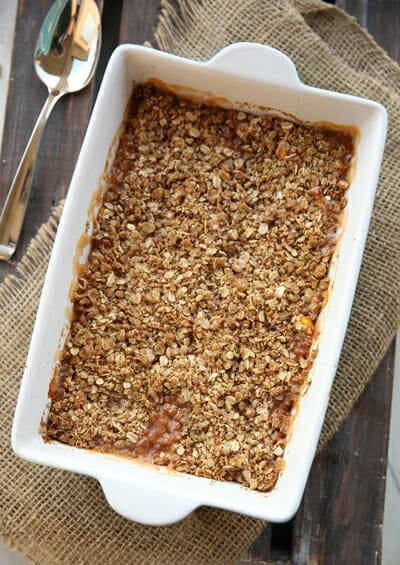 You’ll want to let it sit and cool off till it’s just warm.  Fruit gets super hot when cooked, and besides burning your mouth, it will melt your ice cream if you serve it piping hot! 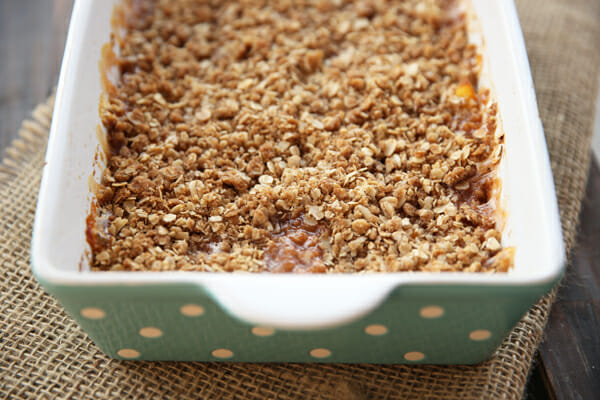 When it’s just warm, spoon it over vanilla ice cream.

Notice how after being spooned out of the pan, there’s not a pool of juices there. 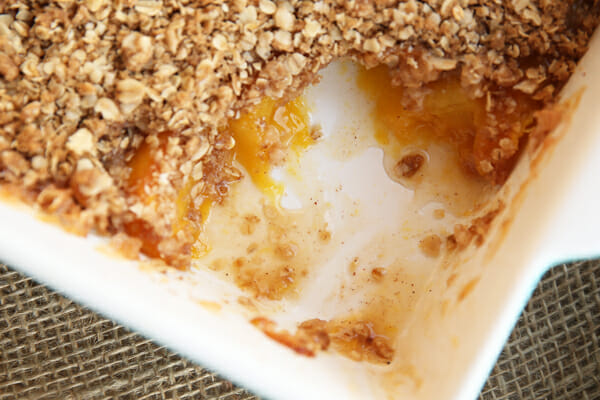 And it’s not too sweet; just the perfect flavor of ripe peaches, balanced by the warm crunch of the topping and a hit of cool, creamy vanilla. 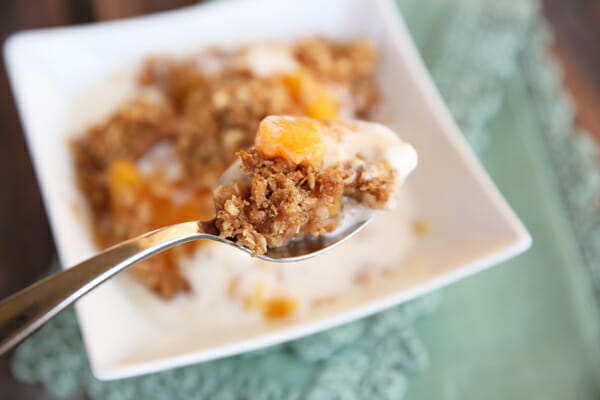 Trust me, you need this in your life. 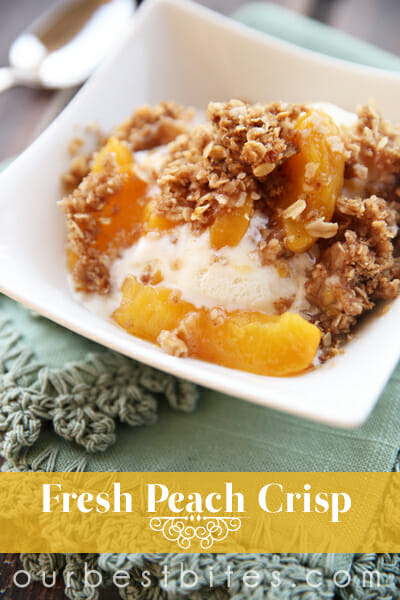 Note: Hover over the above image to Pin it!

Instructions
For peach filling, gently combine peaches and sugar in a large bowl and let stand for 30 minutes, tossing occasionally. Drain peaches in a colander set over a large bowl, reserving the peach juices. Whisk 1/4 cup of the drained peach juice, cornstarch, lemon juice, salt, cinnamon, and nutmeg together in small bowl.  (You can discard the rest of the excess peach juice or toss it in a smoothie!) Toss juice mixture with peaches and transfer to an 8 or 9 inch square pan that’s been sprayed with cooking spray.  Any size pan that’s close to that is fine, it doesn’t need to be exact.  As long as it all fits, it’s good 🙂

For topping, combine oats, brown sugar, flour, nutmeg, and cinnamon and either grate the cold butter with a large-hole cheese grater, or cut it into small cubes and use your fingers to crumble the mixture together.  Sprinkle topping evenly over pan.

Bake for about 30 minutes.  The topping should look golden brown and crisp, and I always watch for little bubbles of peach liquid to start popping though the outside corners.  Let cool to luke warm before serving.  Spoon over ice cream.

Feeling Peachy? Check out some of these other recipes featuring this in-season beauty! 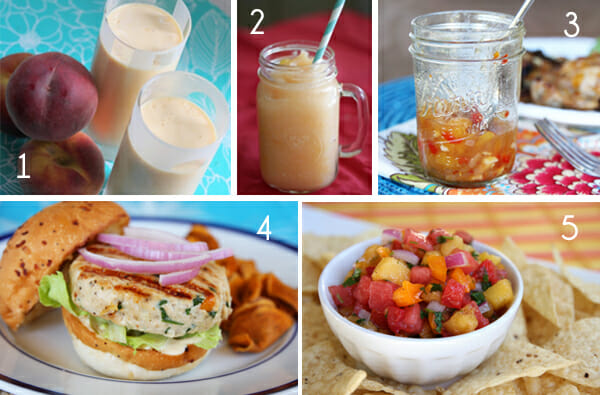 And speaking of both fruit crisps and our cook book, here’s another favorite exclusive to our book.  If you  have it, check this one out! 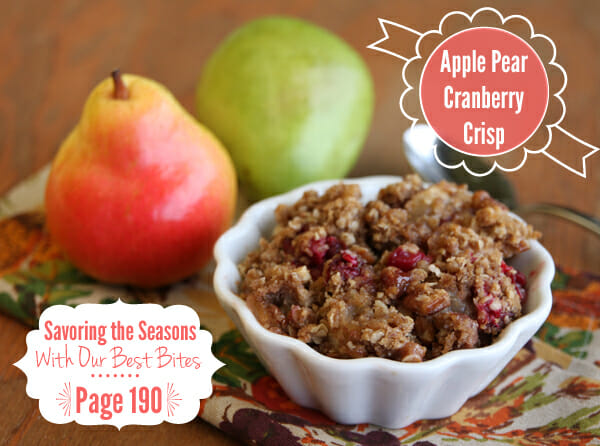 PS Check out the “Timeless Originals” tab on our sidebar for a new Bonus Dinner Recipe today!