As a lot of you probably know, we moved to Louisiana about a year ago. When we announced that we were moving here, we heard one of two things: 1) “Why?!” and 2) “The food there is absolutely amazing.” Actually, a lot of times we heard both.

I’ll spare you the gory details of our move down here, but I will tell you that it involved a missed flight, a week in an extended-stay hotel that my 3-year-old referred to as the “ho-temple” (and I won’t lie, he wasn’t too far off), and leaving our families on the other side of the country.

Our first night here, we went to an Italian restaurant where the waitress called the little girl at the table next to us “little mama” and I felt so out of place and conspicuous with my “definitely not from here” accent and having NEVER referred to anyone as “little mama.” I was convinced that everyone was going to automatically hate me.

We ate out a lot those first few weeks as we were settling in and after a little while, we decided to step out of our comfort zones and try some of the more regional fare since, supposedly, Louisiana has the most delicious food in the world. That’s when I tried red beans and rice for the first time. I’d never had it before, and I didn’t know what to expect when I ordered it. And I don’t know if it was the loneliness and upheaval that we were feeling in our lives at the time or if it truly was that delicious, but even though it was something new, it tasted like going home. And I have to say that it’s a good thing that red beans and rice was the first Louisiana food I ate here, because my first several encounters with gumbo were unpleasant ones (I was finally converted–this is my tried and true recipe). If you’re curious, okra is a vegetable imported straight from hell and personally hoed by Satan himself (unless it’s fried, and then all bets are off.) 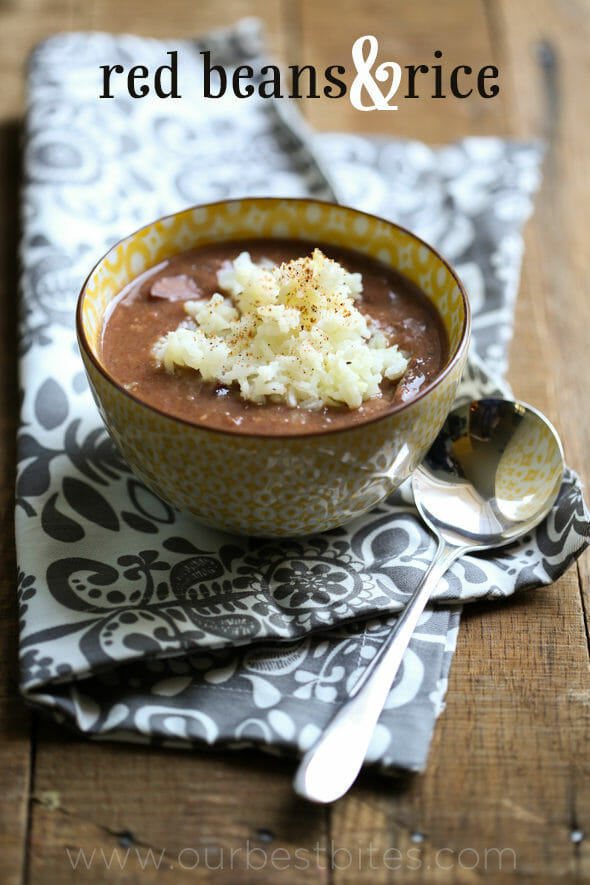 Slowly, we came to discover that no one in Louisiana hated us (at least not to our faces!) In fact, I’d never felt more accepted or loved by complete and total strangers in my whole life, like the ladies at the grocery store who call me “baby” and ooh and ahh over my own “little mama” and “little man.” In the year that we’ve been here, I’ve eaten a lot of red beans and rice; everyone has their own way of doing it, kind of like everyone has their variation of funeral potatoes in Utah. But every pot I’ve ever had has been made with love, and that makes me love it even more–even the ones I ate (kind of) that had a little meat in there that tasted and looked suspiciously like squirrel…

So this is my version–red beans from a Utah girl living in the South and learning from the best…Oh, and if it looks familiar, I borrowed some seasonings from Sara’s black beans.

how to make it

You’re going to need a pound of dry red kidney beans, rinsed and sorted for any inedible things like stones, an onion, a whole bunch of garlic, some Cajun or Creole seasoning (like Tony Chachere’s, which is a national brand, but there are many varieties that are widely available), some cumin, coriander, oregano, and just a pinch of cinnamon (about 1/8 of a teaspoon.) 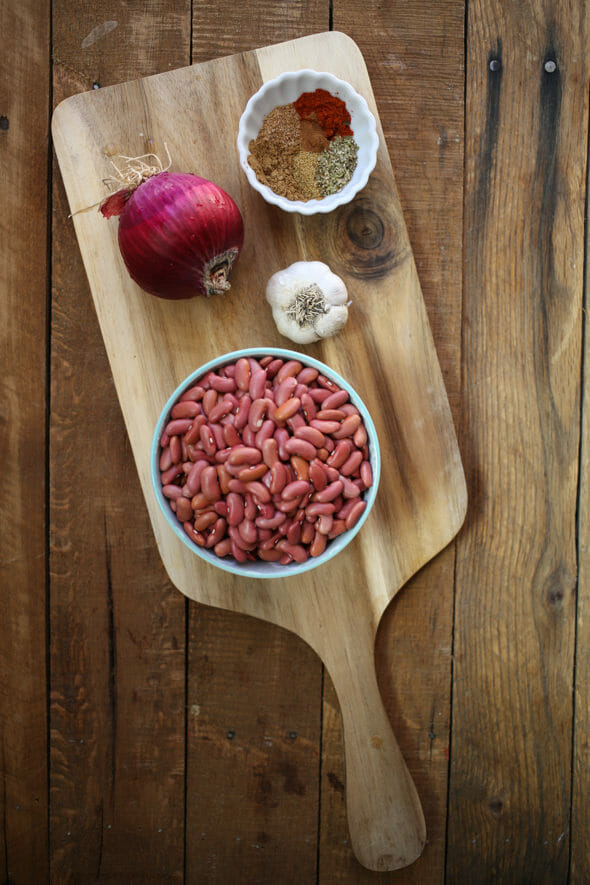 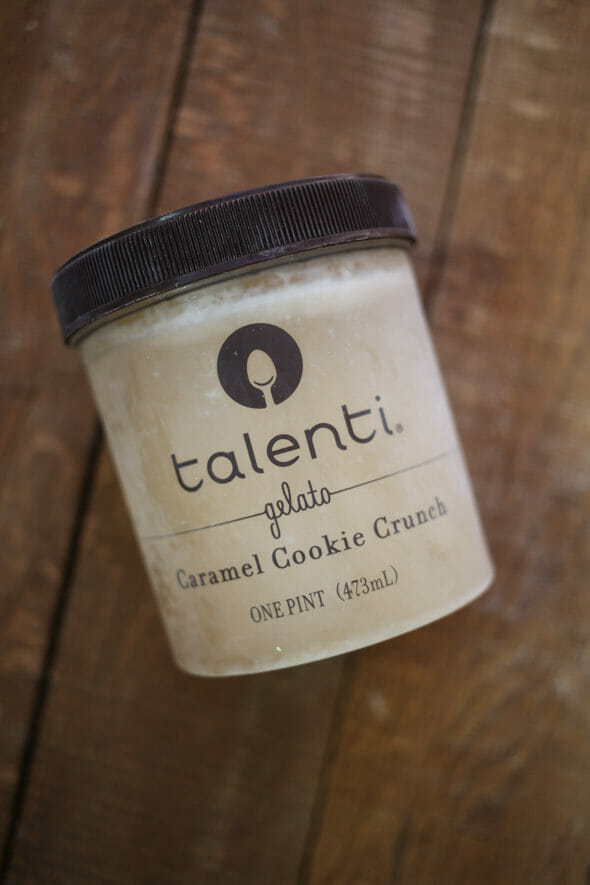 Also, it’s kind of funny to see your husband’s reaction when he opens up the freezer and sees 8 Talenti gelato lids, pulls one out, and realizes it’s chicken broth.

You’ll also need to cut about about 1/3-1/2 pound of smoked pork sausage. Try and find the good stuff–even if you don’t live in Texas or Louisiana where good smoked sausage is widely available in grocery stores, many butchers around the country smoke their own sausage and sell it in their shops. 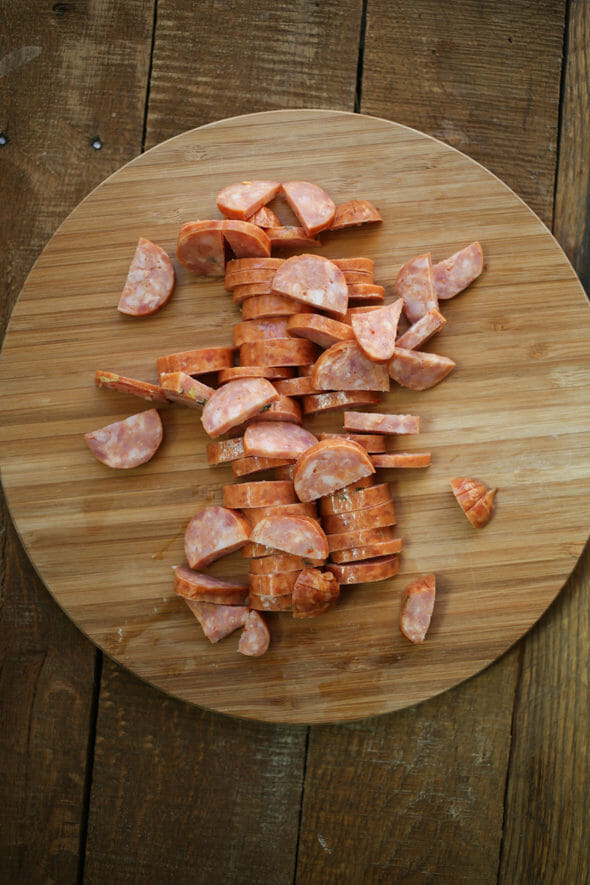 Combine all ingredients in a crock pot 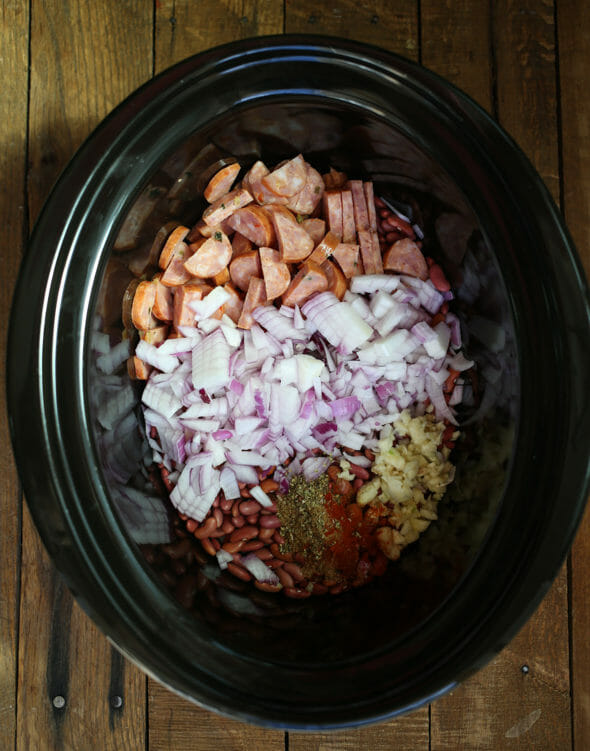 and cook on high for 4-5 hours or on low all day. Or you can start on high until it starts to simmer and then switch it to low. If you live at a high elevation, you’ll need to cook the beans longer or soak them overnight before slow cooking the next day.

When beans are tender, mash about 85-90% of them against the side of the crock pot. Give them a taste and add any extra seasonings if you need to, particularly more Cajun seasoning or salt and pepper. Replace lid and set heat to “low.” Or off. Whatever. It’s pretty hard to screw stuff up in the crockpot. In a medium saucepan, bring 4 c. water, 1 Tbsp. white vinegar, and 2 c. of white rice to a boil. Reduce heat to low, cover, and steam for 20 minutes.

Now…this may be heresy to people who grew up eating red beans and rice, but I prefer it with the beans on bottom and the rice on top. I just think it’s prettier. 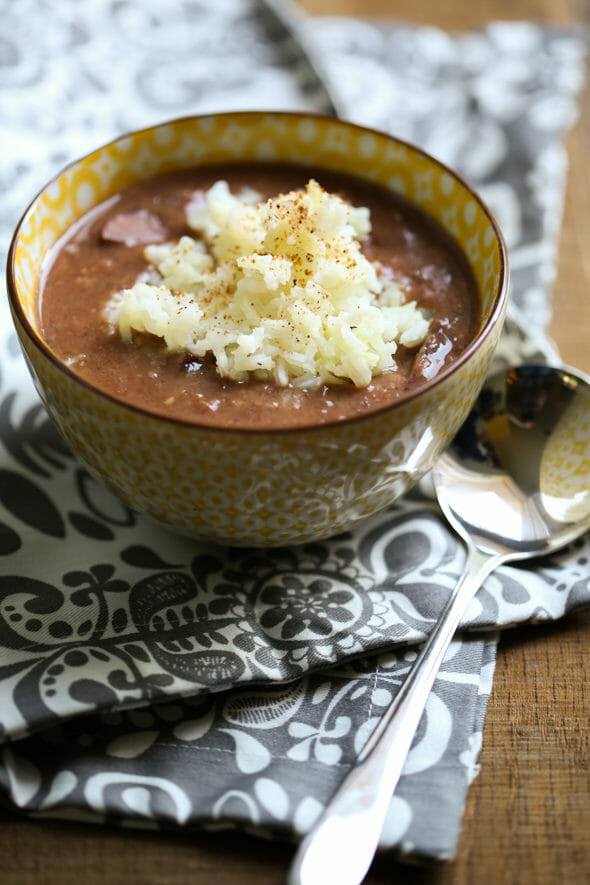 1/3–1/2 lb. smoked sausage (Andouille sausage if you can find it), quartered and cut into thin slices. You can also use a large, meaty ham bone.

1 tsp. Cajun or Creole seasoning (Tony Chachere’s is the best; omit this if using Andouille sausage)

Combine all ingredients in a crock pot and cook on high for 4-5 hours or on low all day. Or you can start on high until it starts to simmer and then switch it to low. If you’re at a high elevation, the beans will need to cook longer and/or you need to soak them overnight before you start cooking them in the morning.

When beans are tender, mash about 85-90% of them against the side of the crock pot. Give them a taste and add any extra seasonings if you need to, particularly more Tony’s or salt and pepper. Replace lid and set heat to “low.”

Or off. Whatever. It’s pretty hard to screw stuff up in the crockpot. In a medium saucepan, bring 4 c. water, 1 Tbsp. white vinegar, and 2 c. of white rice to a boil. Reduce heat to low, cover, and steam for 20 minutes.

Freezer Instructions: Chop sausage, onion, and garlic and place in a quart-sized freezer bag. In a gallon-sized freezer bag, place the remaining ingredients except the rice and broth. When ready to cook, place the contents of both bags in a slow cooker and add the water. Cook according to the recipe directions and serve with rice.