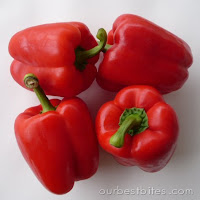 I had a request for this tutorial, and I’ve been wanting to do it for a while now, but it kept getting put off. So today is the day! I’ve explained this so many times to people, but it’s one of those things that’s much easier to do if you have a visual example.

It’s no secret that I love roasted red peppers. I put them on panini, pasta, pizza, dips, eggs and omelets, salads and more. Most people buy them jarred in the store, but it’s super easy to make them at home, and the superior taste is worth the little effort it takes to do it.

You can use this same method with red, yellow, and orange peppers and I also use it for roasting anaheims before putting them in salsas and soups. And you know when you’ve had a pepper for just a little too long and it starts looking wrinkly on the outside but is still firm enough to eat? I roast those too- perfect solution!

I’m going to show you a few different ways to char them, starting with the method I use most often.

2. Cut the tops off of the peppers. You want the segments to lay flat on the cookie sheet, so cut off the rounded tops. (Eat ’em don’t toss ’em!) Okay, if you really want to use every last inch of the pepper, then you can cut off all of the red flesh from the top as well. I guess I’m just lazy, lol. 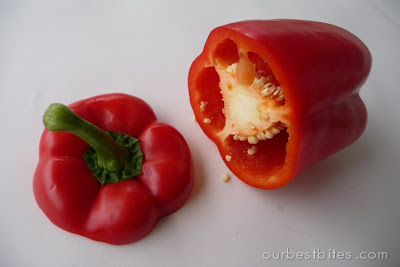 3. Remove the seeds and membranes and then slice the pepper into segments length-wise and lay skin side up on a foil-lined cookie sheet.

4. Place oven rack on the highest position in oven and place peppers directly under the broiler. (You may want to open a window or a door in case you have a sensitive fire alarm!) Keep the oven door cracked and keep an eye on the peppers. You want them to be charred and blackened. It’s okay if there’s still some red spots, but you want even charring over all of the pieces. Move the pan around if you need to. They should look about like this when done: 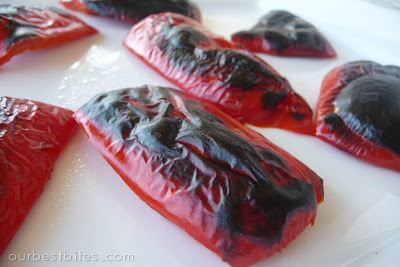 5. Take the peppers out of the oven and use tongs to immediately place in a zip-lock bag and seal it (or in a bowl with plastic wrap securely on top, or in a brown paper bag folded over to keep the steam in) Set them aside and don’t open them for any reason! 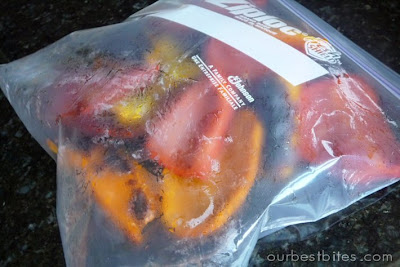 6. After about 20 minutes or so they should be cooled off enough to handle. Remove the peppers and use your fingers to remove the charred skins. It should slide right off without a problem. Toss those skins and you’re left with beautiful smoky-sweet roasted peppers. 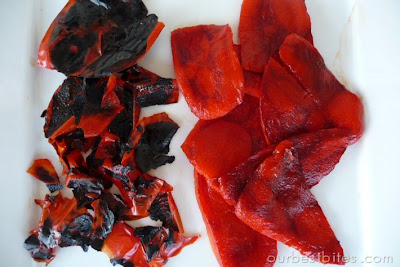 I mentioned that there were other methods. One is to place them on the bbq grill. (Hmm…think it’s about time I clean mine?) You can just place the whole pepper on there, but you need to keep turning it so it blackens all the way around. And if you happen to get side-tracked and forget about your little peppers like I did, it will turn to mush. So don’t do that. After it’s charred, just follow the same instructions as above. 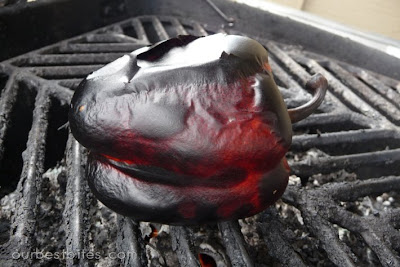 If you have a gas stove, then you can do it right on your stove-top. I would take pictures of that, but I don’t have a gas burning stove and I really didn’t want to start knocking on my neighbors doors holding a pair of tongs and some peppers. But just hold a whole pepper with a set of tongs and place directly in the flame on the stove-top. Keep turning until evenly charred and then follow the steaming instructions above.

As I said before you can use roasted red peppers for so many things. I was browsing cook books at Costco the other day (why buy when you can just go hang out there for an afternoon? With all of the samples you get a free lunch and you then you can go read all the books you want!) and I saw marinated roasted peppers in a Martha Stewart book. She took sliced roasted peppers and mixed them with a little olive oil, a splash of balsamic vinegar, minced garlic, salt and pepper, and fresh basil. I did that and they were awesome. 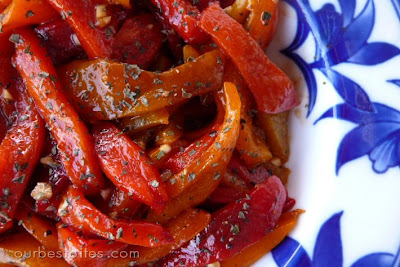 I kept them in my fridge and ate them all week on sandwiches, crackers, with cheese, etc. In fact almost every day I had a turkey wrap for lunch, using a nice big piece of turkey for the wrap instead of a tortilla. I filled it with lettuce, spinach, cheese (yes, that is string cheese and I defend my love for it), and the peppers. The marinated peppers gave it so much flavor- I loved it. 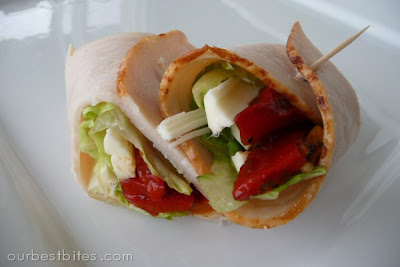 The good news? These flavor-packed veggies have minimal calories. Here’s the skinny (literally)