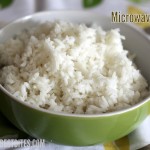 I’ve had this post planned for almost a year now. When we first started the blog, I posted a super basic tutorial on how to cook white rice. Seriously…like the instructions on the rice bag (I promise, if we posted that same thing today, we’d get 50 mean emails about how our blog has gone downhill and we’re just skating by with stupid posts.) However, since we moved to Louisiana (also known as The Land Where No One Eats Potatoes, Just Rice), I’ve learned a lot about cooking rice, different types of rice, and how to troubleshoot some common problems like crunchy or soggy rice.

Let me preface everything by saying that I have had bad luck with rice cookers. I know that’s not the case for everyone, and I’ve had good rice cooked in rice cookers, but I’ve never found a rice cooker that works for me; it’s always been somehow burned and undercooked at the same time. But maybe someday I’ll continue my quest for a good rice cooker… 🙂

So last fall, I went out and shopped for all different kinds of rice and had grand plans for a big ricey post full of riciness. And then I got myself [insert your favorite lighthearted pregnancy euphemism here; careful, you don’t wanna be called “unclassy”] and the smell of rice cooking did bad things to me. And then it was hot outside and it felt weird to talk about rice when it was hot outside. So here we are. A year later, no longer pregnant and ricier than ever.

First, let’s talk about different types of white rice. You have your regular old rice that comes in different grains (short, medium, long, and extra long). There was a time when I never really thought about what grain my rice was, but I have since become an almost exclusively long- or extra-long rice kind of gal.

As a general rule, the shorter the rice, the softer and stickier it is. That can be good or bad. Making sushi rice? Short-grain rice (or sushi rice, which is short-grain) is the way to go. Making something like a pilaf or fried rice where you want individual rice kernels? Long or extra-long is your best bet. When it comes to just basic white rice, I don’t like mine overly sticky or soft, so I like the longer grains.

You also have the specialty rices like arborio, basmati, and jasmine rice.

Arborio is a flat, short-grain Italian rice that is used in risotto. And the short grain is part of what makes risotto so creamy and comforting. Basmati is a long-grain fragrant Indian rice that is good in stuff like our Coconut Rice. Jasmine rice is similar to basmati rice, but it’s grown in Thailand, has a shorter grain, and is cheaper.

There’s also parboiled rice, which is white rice that is partially boiled and/or steamed while it’s still in the husk, so it takes on some of the nutritional benefits of brown rice. The only brand I’ve ever seen is Uncle Ben’s parboiled rice, although I know it’s also sold in Asian markets under different names. I was stupid and didn’t get a picture of it, but it is browner than regular white rice. Like long-grain rice, parboiled rice is firm and not sticky at all. When it comes to cooking parboiled, jasmine and basmati rice, you cook them pretty much how you would cook regular, white, all-purpose rice.

Wow. This could be the most boring blog post ever. I sound like a fricking rice textbook.

So anyway. Let’s talk about how to cook white rice.

I always did the standard twice as much water as rice, bring to a boil, cover, reduce heat, and steam for 20 minutes. Which was usually okay in Utah, which is at a very high altitude, but when we moved to Louisiana, my rice was almost always unbearably soggy. And I realized it was probably the elevation. So I’ve started adjusting the water depending on where I am when I’m cooking rice and it’s been so much better!

Cooking Rice on the Stovetop

When it comes to basic, classic rice, I usually cook it on the stovetop. Up until recently, I’ve always used a regular saucepan to cook rice, but I’ve recently started cooking my rice in a skillet instead of a saucepan.

I’ve found that the rice cooks more evenly and just better when it’s not piled quite so high like it is in a saucepan.

To make it on the stovetop, you can either place the rice in the skillet…

or heat the skillet over medium with 1 teaspoon of oil or butter per cup of rice. When the oil is hot, add the rice and toast it for 30-60 seconds or until the rice smells distinctly “ricey” (don’t over-toast it, though–it will make your rice tough if you do) before adding your liquid. Toasting the rice adds a subtle flavor dimension and also improves the overall texture of your finished rice.

When it comes to cooking liquid, I’ve found that if I’m at a normal elevation, the regular 2 parts water/1 part rice rule still works great. If I’m at a low elevation, though, I cut back on the liquid by 2 tablespoons and if I’m at a high elevation, increasing the liquid by 2 tablespoons helps ensure the rice is tender. You can also add 1 teaspoon white or white wine vinegar per cup of water (or broth). It also helps improve the final texture of the rice. Just be sure to add the vinegar first to the measuring cup and then fill the rest with water to make sure you don’t have too much cooking liquid.

So add the liquid to rice (toasted or untoasted) in the skillet, cover, and bring to a boil over medium-high heat. Reduce heat to a simmer (make sure the rice is simmering and that when you reduce the heat, it isn’t just sitting there in water that isn’t doing anything) and cook for 20 minutes. Again, in lower elevations, you may need a little less time and in higher elevations, you might need a few more minutes to make sure the water has been absorbed. The surface should be smooth and there should be uniform holes or pockets in the rice. When it’s done cooking, remove from heat, leave the lid on, and let it steam for another 5 minutes before removing the lid. Check out the rice in this picture–you can see the individual kernels. It has a good, firm texture and tastes like traditional rice.

Why cook rice on the stovetop?

* It has the most classic flavor and texture; if you’re trying to impress your rice-cooking professor, this is probably the way to go.

*It’s a good skill to have; you may not always have access to a microwave or an oven to cook rice.

*It’s faster than the oven method, and not that much slower than the microwave method.

Why wouldn’t I cook it on the stovetop?

*If you have a million other things going on and forget about it, bad things will have happened. I’ve never saved a pan that cooked scorched rice.

*It’s not as fast or as forviging as the microwave.

Cooking Rice in the Microwave

This is a super-easy method that’s good if you’re cooking rice that isn’t going to be served as just rice–so rice for fried rice, stir fries, etc.

Place 1 part rice, 2 parts liquid (no matter what elevation) in a microwave-safe dish that has a cover and cook for 10-15 minutes (start with 10, check on it, and add additional time if necessary). When the water has been absorbed, allow it to stand covered for 5 minutes before fluffing with a fork and serving.

Why Cook Rice in the Microwave?

*If you’re likely to forget the rice is cooking, this is the way to go.

*It’s a little bit faster than cooking it on the stovetop.

*It’s good for cooking rice for stir-fries or fried rice (make it ahead of time and refrigerate it for later use).

Why Wouldn’t I Cook It in the Microwave?

*It’s not THAT much faster than cooking it on the stovetop.

*It has a slightly off texture and flavor, making it not the best choice if you’re serving it completely by itself.

Cooking Rice in the Oven

My sister Holley gave me this recipe when I went to college and it’s a great little comfort food dish. Seriously, if you’re sick and nothing sounds good, or if you’re sad and white buttered rice is the only thing that sounds good, this is my favorite way to cook it. It’s also great when you’re serving plain white rice alongside comfort food like roast beef or roast chicken, especially if gravy is involved.

Preheat your oven to 350. Place 1 cup rice in an oven-safe dish with 2 tablespoons butter, 1 teaspoon kosher salt, and a few cracks of freshly ground black pepper.

and cover tightly with a lid or foil. Bake for 45 minutes. Remove from oven and allow to stand covered for 5 minutes. Fluff with a fork and serve.

This rice is much heavier and softer than the other two. You wouldn’t want to use it in fried rice or a rice pilaf, but the butter and extra liquid makes it smooth, soft, and almost creamy, kind of like a poor man’s risotto.

Why Cook Rice in the Oven?

*More forgiving; an easy side dish while you’re working on other things.

Why Wouldn’t I Cook Rice in the Oven?

*Not good for leftover rice dishes like fried rice, jambalaya, or pilafs.

*Tastes kind of casserole-y. If that’s not your thing, this probably isn’t your method.

So print this out, hang it on your cupboard door (or tape it inside your favorite cookbook) and you’ll never forget how to cook white rice! Also, if you haven’t already, be sure to check out Sara’s tutorial on how to cook perfect brown rice!

How to Cook White Rice 3 Ways
By Our Best Bites

Place rice in a large, lidded skillet. Add water or broth, cover, and bring to a boil over high heat. Reduce to a simmer (make sure it’s simmering and not standing) and cook for 20 minutes or until water is absorbed. Remove from heat and allow to stand covered for 5 minutes. Fluff with a fork and serve. Makes 3 cups of rice.

Optional step: In a large, lidded skillet heat oil or butter over medium heat. When hot, add the rice and cook, stirring constantly, for 30-60 seconds. Add liquid and cook according to preceding directions.

Place 1 cup rice and 2 cups water in a microwave-safe dish with a lid. Cook on full power for 10-15 minutes (check after 10 minutes) or until water is absorbed. Allow to stand covered for 5 minutes before serving.