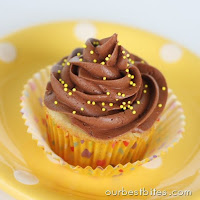 One of the most popular recipes on Our Best Bites is this flour frosting.  Its velvety smooth texture combined with the not-so-sugary bite is perhaps the perfect thing on top of almost any cake or cupcake.  If you read through the comments you’ll see that one of the most commonly asked questions is “Where’s the chocolate version??!!”  Kate and I experimented a lot with adding chocolate to that recipe without much luck.  We came up with a lot of things that tasted amazing, but there were always slight problems with the consistency.  I knew I had seen similar recipes in chocolate before but I couldn’t seem to find one until one of you dear readers pointed me to a recipe on Sugar Plum.  Sure enough, it was just what I was in search of!  I adapted the recipe slightly by using plain ol’ salted butter and omitting added salt.  And then I added extra chocolate to get a richer color and flavor.  Everyone needs a “go-to” chocolate frosting and this is now mine!

The recipe starts by cooking flour, milk, sugar, and cocoa powder in a sauce pan until it thickens, much like the first step in the beloved white frosting. 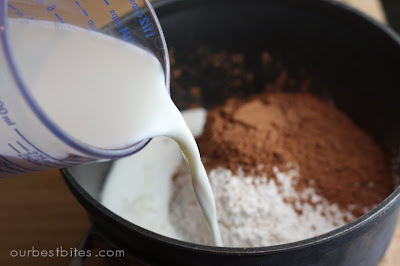 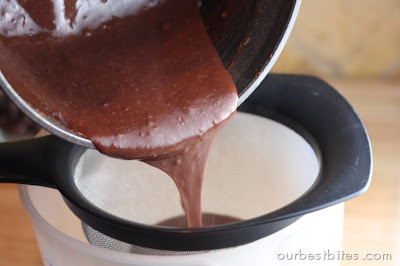 While that mixture is cooling off, melt some chocolate chips in the microwave.  I found this to be the key to having the frosting remain stable- the melted chocolate seems to bind it. 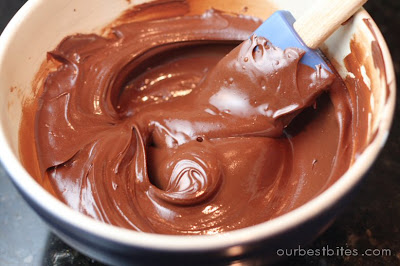 Then we whip real butter with our chilled chocolate mixture until it’s light and fluffy, 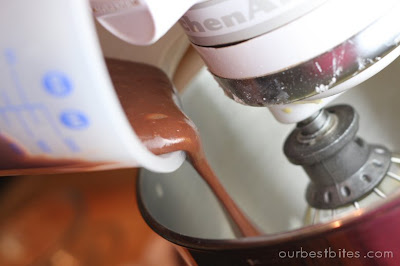 like so.  At this point it’s much like the results of just adding cocoa powder to the white frosting. 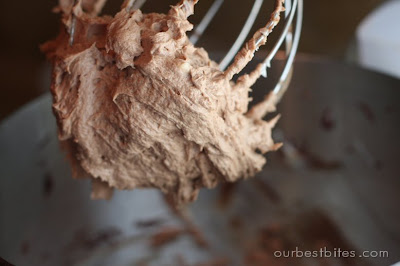 But the secret is adding in the melted chocolate.  Isn’t chocolate always the secret?? 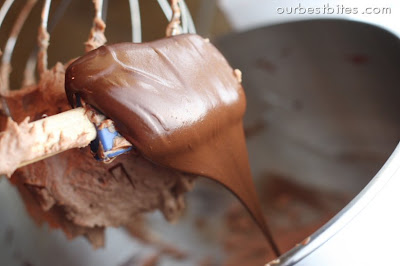 Whip that up and then give it a taste.  If you want a richer chocolate flavor just add more cocoa powder.  I added about 4 Tablespoons extra to get my frosting looking and tasting like this (I also found the color of the frosting darkened as it sat): 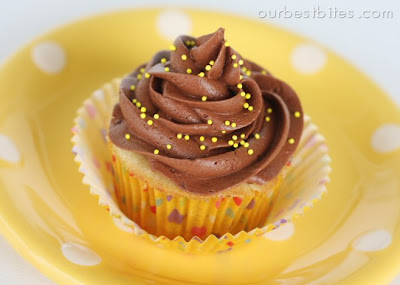 It pipes beautifully, and tastes amazing!  And just WAIT until I show you what I put it on- that post is coming up Friday- and trust me, you’ll go bananas!  (hee hee)

Melt your chocolate chips if you haven’t already and set aside to cool.  You obviously don’t want it so cool that it hardens, but you can get it close to room temperature and still have it be soft and stir-able.

In a small saucepan, whisk together sugar, flour, cocoa, and milk; bring to a boil, whisking frequently. Boil 1-3 minutes or until thickened like a thinned pudding.  Remove pan from heat and strain mixture into a small bowl. Cool completely in the refrigerator or freezer.

When chocolate flour mixture is cooled, beat the butter until creamy, about 1 minute.  Beat in the cooled chocolate mixture until well combined fluffy, about 1 minute.  Finally add in melted chocolate and beat again until well combined and fluffy, about 2 minutes.  If desired, add additional cocoa powder to taste, up to 4 tablespoons more.  Spread or pipe frosting on to cupcakes or cake.

Storage: Store unused frosting in fridge and bring to room temperature before using again.  If needed, beat with an electric beater before using.