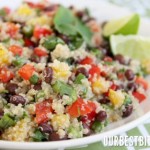 Who else watches The Biggest Loser? I remember the first time they started promoting it years ago, when there was nothing like that on tv, and I thought it seemed like such a horrible idea.  Who flaunts people’s weight problems on national television for entertainment?  Do you remember that?  The idea was sort of shocking.  Now of course, like so many others, it’s one of my most favorite shows.   Even though half the time I watch it while eating ice cream, I think it’s completely inspiring and I love watching everyone’s transformations.  I’ve loved watching this season, and for the first time in a few seasons I really love everyone in the final four.  But I especially love the sisters, Hannah and Olivia.  Olivia, in particular has been my favorite all season.  She looks so amazing now (Check out the pics she posted to her FB Page of her homecoming.  She looks crazy good!)  I think she’s hilarious and not super whiny and annoying like girls can often be on that show.  I also think she’s my favorite because I find it semi freaky that 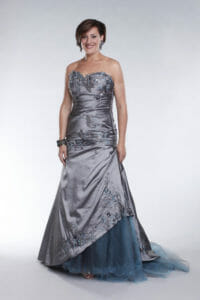 (hair aside) she looks a lot like me.  And even more freaky, her sister Hannah looks a lot like my sister.   Now that the season is almost over and she’s skinny and hot, people have come out of the woodwork to tell me how much we look alike.  I’m pretty sure they all noticed before and chose not to mention it until now.  I have smart friends.

Anyway, on an episode a few weeks ago, Ali Vincent (a previous winner) came for a visit.  She did a kitchen segment where she made this quinoa salad that I thought sounded pretty good (not gonna lie, not all of that Biggest Loser food does.  Cutie pie Curtis Stone can only do so much without oil and salt…)  And I had just finished prepping this post all about quinoa.  Perfect timing!  It’s really simple, really healthy, and works great as a main dish or a side dish. Check it out.

Place some cooked quinoa in a large bowl 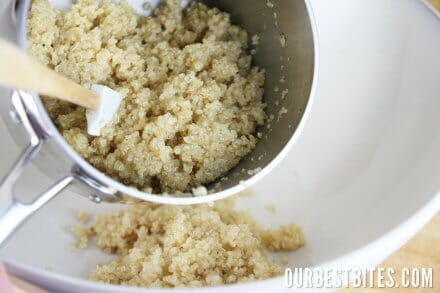 Add some black beans, which are packed with protein and fiber 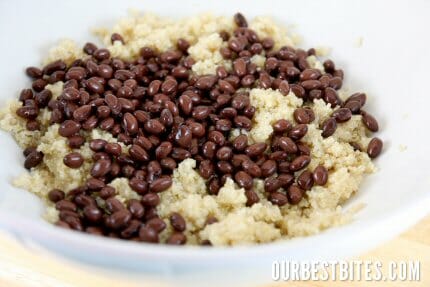 And some gorgeous chopped bell pepper.
And if you have to sell your first born to be able to afford a fresh red bell pepper right now, you could substitute some jarred roasted red bell peppers, or even a couple of diced tomatoes. 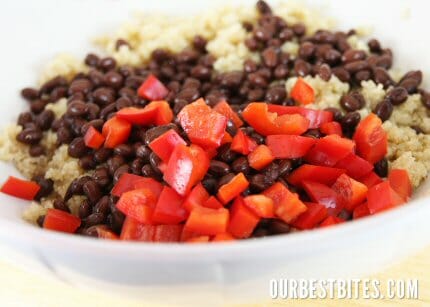 Add some sweet, juicy mango.
FYI Whole Foods Market has awesome Hatian mangoes in stock right now.
That’s what I used and they were deeelicious. 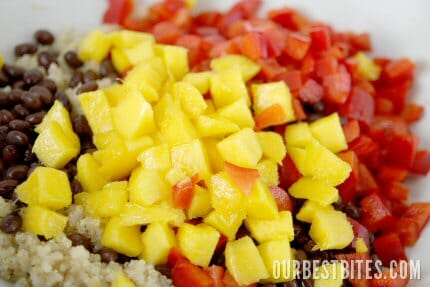 Toss in some sliced green onions 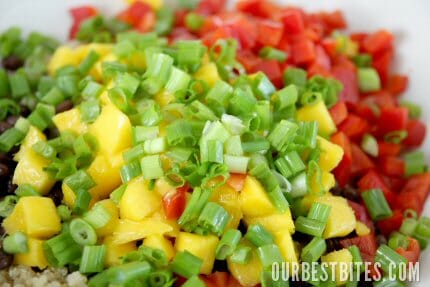 And a big handful of chopped cilantro 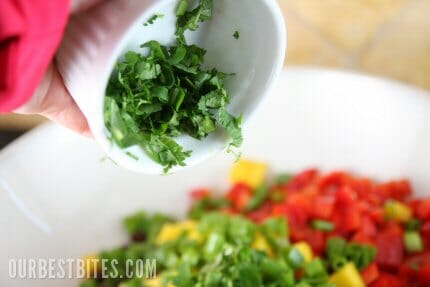 Give it a big toss 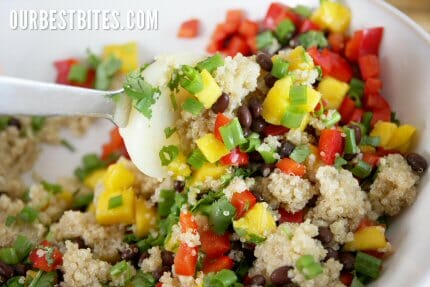 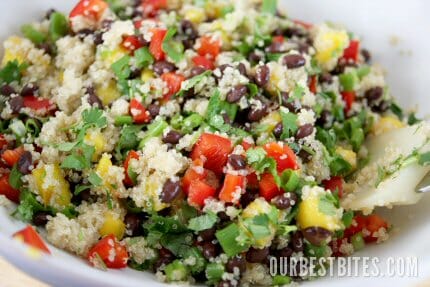 In a separate bowl, whisk together the quick dressing.
Juice a half of a lime, or a whole lime if you’re a lime-y kinda person like I am. 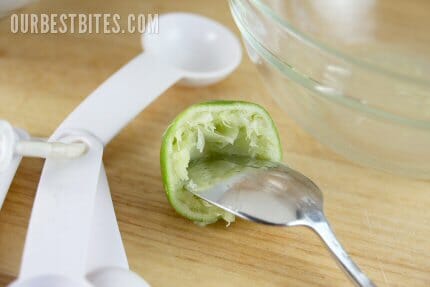 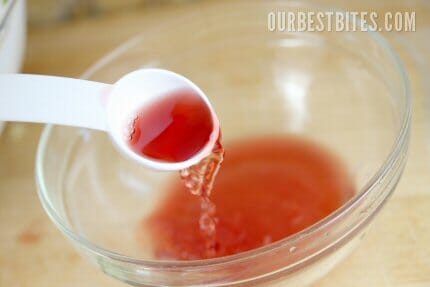 and some extra virgin olive oil 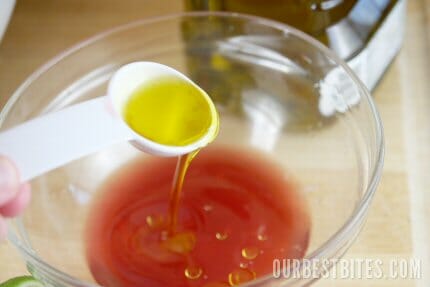 And then pause to reflect that food is indeed art 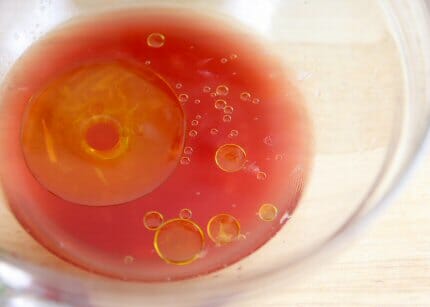 Write a haiku if you feel so inclined 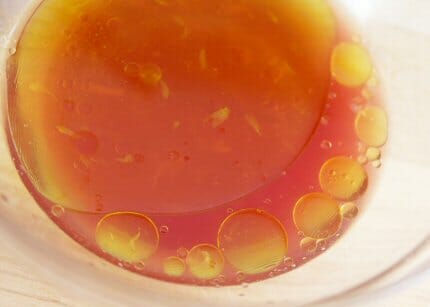 And we’ll move on.
Whisk it all up and pour it over the salad and then give it another good toss. 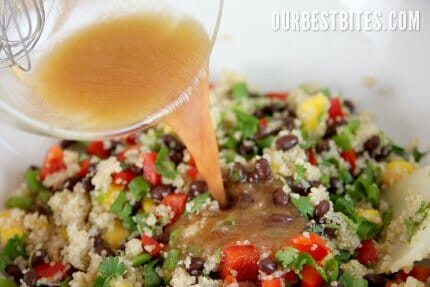 Now this is where I would get kicked off the ranch.  Because on the ranch we all know that salt is evil.  Unless you’re trying to throw a weigh-in and then it’s awesome. But I think at this point the salad needs a generous sprinkling of kosher salt and fresh ground pepper.  Don’t tell Bob.

Chill before serving so all of those yummy flavors can party it up.
You can eat it plain as a one-dish meal, or as a side dish 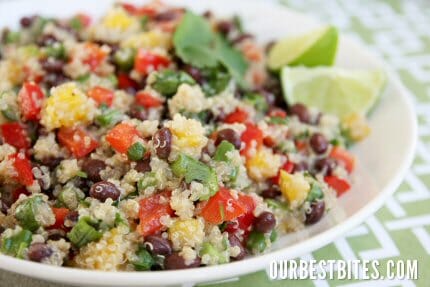 Or do what I did and spoon it over grilled chicken. 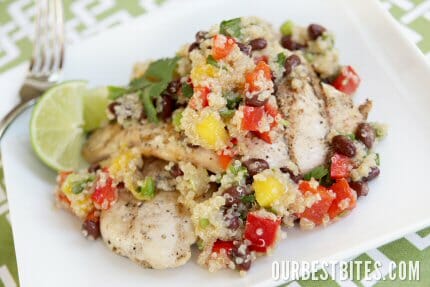 It would also be great over grilled fish (or so I would imagine.
You know, if I could eat fish without my gag reflex kicking in…)

*Quinoa can be cooked in water or broth.  I suggest using vegetable or chicken broth for enhanced flavor, but plain water works great too.

Place cooked quinoa in a large bowl.  Add mango, red pepper, green onion, black beans, and cilantro.  In a small bowl combine vinegar, olive oil, and lime juice.  Whisk until smooth and pour on top of salad.  Toss to combine and add salt and pepper to taste.  Chill for at least one hour before serving.