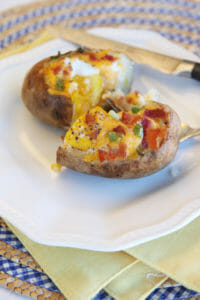 A few weeks ago a friend and I got talking about egg recipes (since she has chickens, and therefore fresh eggs in abundance!)  She mentioned she had made egg stuffed potatoes and they sounded so super yummy.  I love baked potatoes.  There has been a phase during all three of my pregnancies where the only thing I want to eat is a big baked potato with sour cream, chives, and lots of black pepper.  And I always scarf them down wishing they were also protein packed so I could feel somewhat justified in eating them so often.  This is my answer!  These are hollowed out baked potatoes filled with cheese and toppings with an egg cracked right in there.  It kind of all cooks together like a yummy omelet.  Think of it like hash browns and eggs all in one portioned edible container.  This is a fabulous meal for one, or for a whole crew.  You’ll need fully baked potatoes for this recipe.  This is a great use for leftovers!  You can bake them ahead of time, or right before you need them.  Slice a layer right off the top like this: 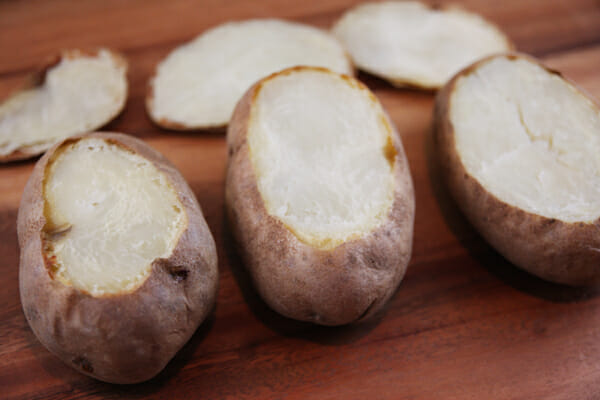 and then take a spoon and gently scoop out the insides.  You’ll want to leave a layer of potato in there so don’t go too crazy.  Save those insides for another meal!  You can make mashed potatoes (have you all tried the Mashed Roasted Garlic and Parmesan Potatoes in our book?  One of my favorites) or toss them in Baked Potato Soup. 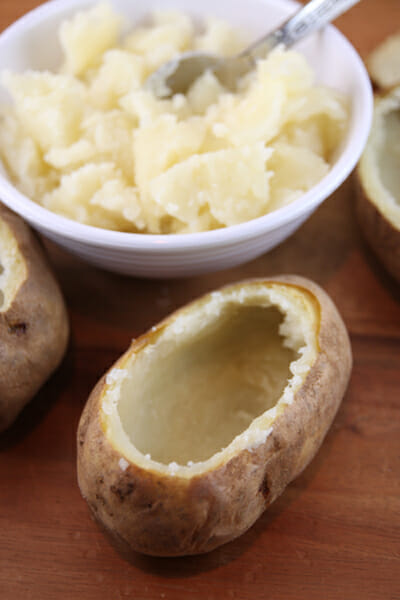 You certainly don’t have to do this next step, but I think it adds extra yuminess and flavor.  Take a little melted butter and brush the inside of the potato all over.  You could also just toss a little pat of butter in there, but I like to coat the whole thing.  Sprinkle in a little salt and pepper as well. 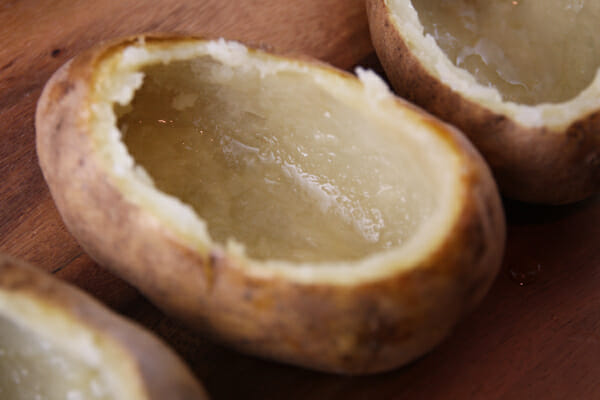 Now add some cheese.  You can be creative; cheddar is always a great pick, or go with something like Fontina, Gruyere, or Muenster. 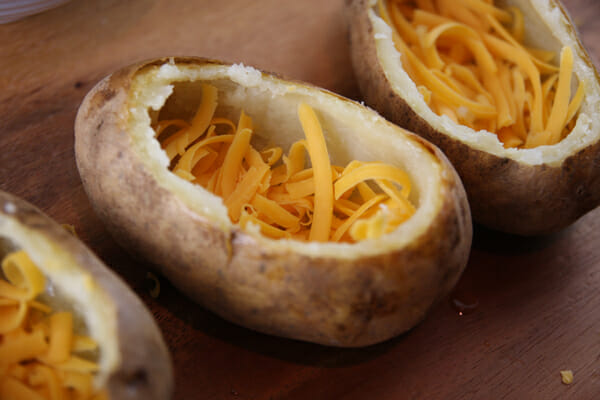 Choose any fillings you like; think of an omelet or a quiche and what you would like in something like that.   Cheddar and diced ham, or maybe sauteed mushrooms with Gruyere.  Or you could go southwest with sauteed bell peppers and onions with pepperjack cheese.  I’m going for a classic bacon and cheddar- can’t go wrong there. 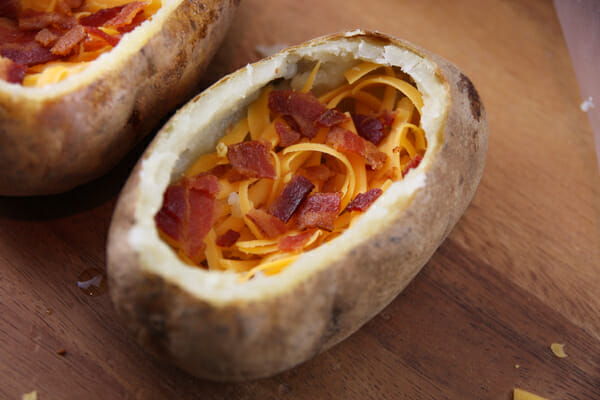 Fill it up about 3/4 full, and then crack an egg right on top. 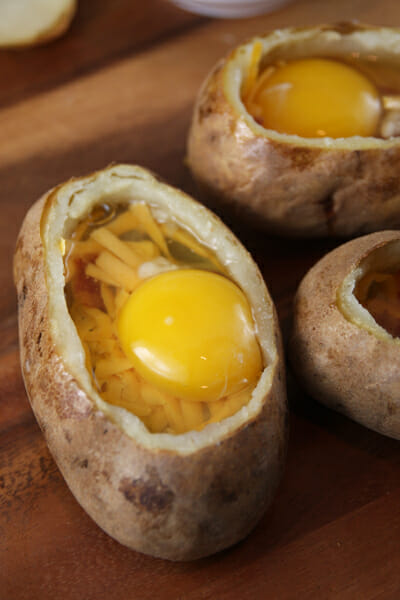 Sprinkle on a little more salt and pepper 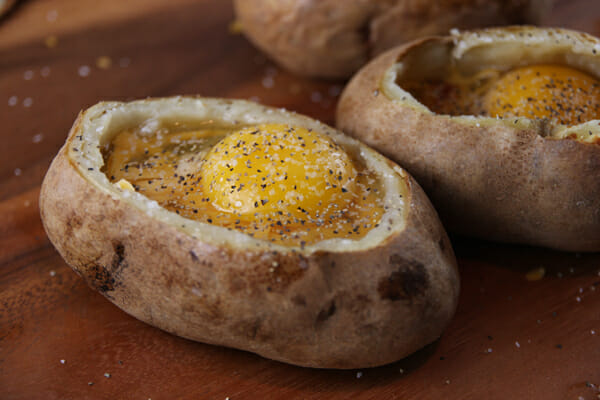 and a few more toppings if you want.  I’m doing more cheese and bacon and some green onions. 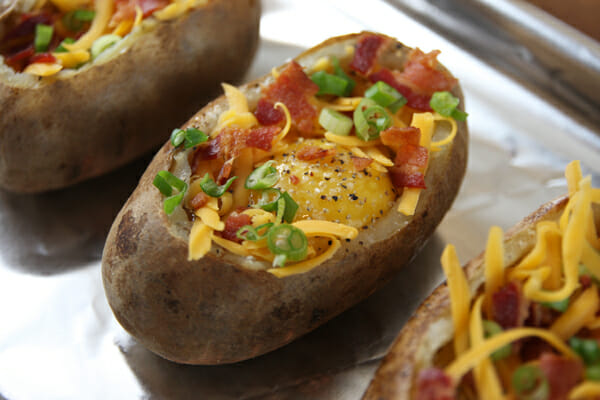 and pop the potatoes in the oven and bake for about 15-20 minutes. 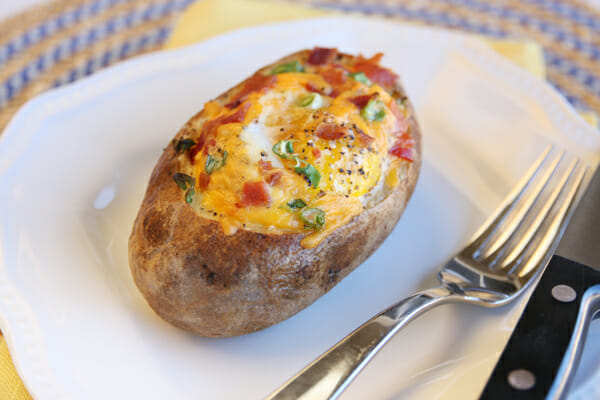 Now, even if you generally don’t like your eggs cooked over easy, you’ll want to keep them pretty soft in this recipe.  The eggs will blend in with the cheese and butter and create all kinds of flavor, but what you don’t want is a yummy baked potato with a hard boiled egg inside!  It’s helpful to not load the very top of your potatoes with so many toppings that you can’t see the egg.  The only way to really know how it’s cooked is to keep an eye on it and touch it for softness after about 20 minutes. 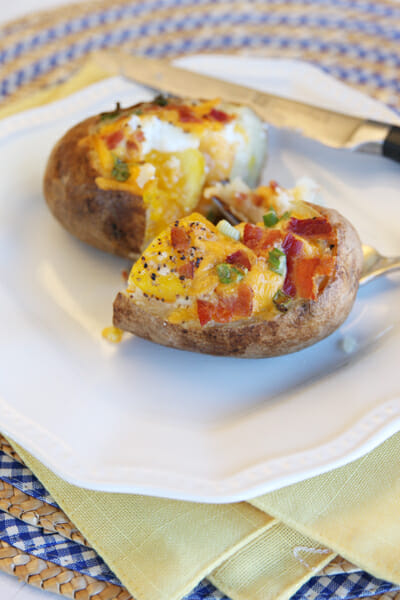 I actually left mine in the oven about 2 minutes too long.  I blame my 1 year old who decided to unroll an entire roll of toilet paper in the toilet and try to flush it right as my timer was going off.  Grgh…  but at least they are still soft in this picture; I wouldn’t cook them any longer than this, and preferably a little less.  They’ll taste best when the yolks are at least soft, and best when they’re just a little runny (and that’s coming from a girl who doesn’t eat runny eggs!) 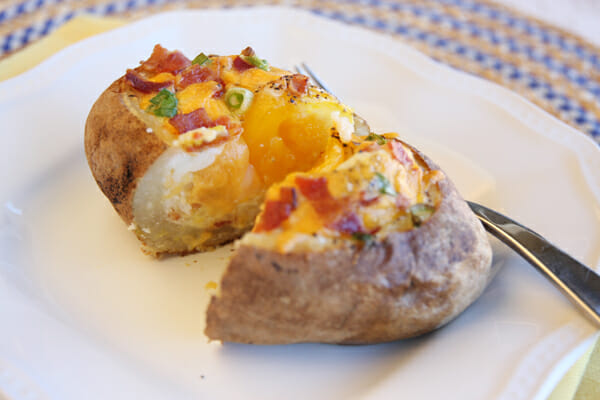 I think the best thing about this recipe is that it’s totally appropriate for breakfast, brunch, lunch, or dinner.  If you want to round it out a bit, serve it with a side of fresh fruit for breakfast or brunch and a simple green salad with lunch or dinner.

When I was looking at recipes like this around the web, most of them are traced back to The Village Cook, who mentioned she got the recipe from her mother and that it was based on a recipe from “The Supper Book” by Marion Cunningham.  She referred to it as an “Idaho Sunrise”, and as an Idaho girl myself, I can’t help but love that!

Slice a layer off the top of each potato.  Use a spoon to gently scoop out insides, leaving a thin layer of potato against the skin and avoiding puncturing the bottom.  Reserve scooped potato for another use.

Place potatoes on a baking sheet and cook for about 20 minutes.  Egg whites should be set and yolks soft.

Also, listen up! We get a lot of requests for autographed copies of our book, which are hard to come by since Kate and I live thousands of miles apart!  But you have an opportunity to snag a copy of our book and have it autographed by the two of us, and most importantly support a really great cause.  This on-line auction just opened up and there are some really great items in there!  And because it’s just opened you can start the bidding and maybe get some amazing deals too!  Here’s the link to the autographed book, but make sure to check out all of the other options too.   We also get tons of emails inquiring about our amazing blog designer.  Check out her listing for a custom web design!  If you or anyone you know is looking into a new look for a website, Susie from Zee Studio is amazing.   So go check it out!