True story: I was recently reading a blog and started clicking around, trying to find the more recent posts, wondering why the writer of the blog was talking about semi-current events, but the dates were all wrong. And then I realized that it is April. The end of April. Not the fall. The dates were right and I was (am?) just losing my mind.

Since I’m totally a mental health professional (I’m not), I spent about 5 minutes psychoanalyzing myself and have decided that after 3 months of morning sickness followed by 3 months of utter chaos, my brain has reset itself to the last time things were kind of normal. Also, due to said morning sickness, I skipped out on all sorts of cinnamon-y fall and winter treats because literally the only two things in the world that didn’t make me want to gag were big, ice-filled glasses of purple grape juice and Coke (not together; the idea of that makes me want to gag).

So apparently I’m now compensating for my lack of fall-ish baked goods because I have this overwhelming urge to make things like Apple Cinnamon Coffee Cake Muffins. I just keep telling myself that brunch is a very springy thing and that you can never go wrong with coffee cake or muffins of any kind at brunch. Not that I’ve hosted or been to a brunch lately. But whatever.

For the cake part, you’ll need a yellow cake mix (if you’ve forgotten or weren’t around for previous posts on this subject, I’m a die-hard Duncan Hines brand loyalist, and no, this post is not being sponsored in any way by Duncan Hines), sour cream, canola oil, eggs, sour cream, vanilla, pumpkin pie spice or cinnamon (depending on your preference), tart apples, lemon juice, and an itty bit of all-purpose flour. 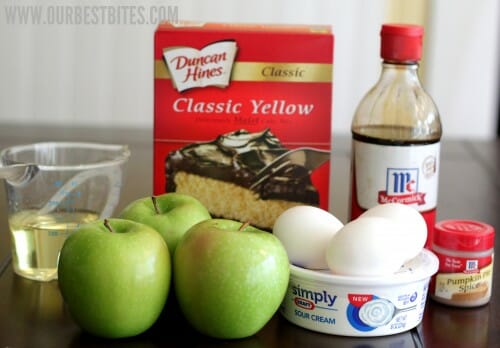 Preheat your oven to 350. Line 2 12-cup muffin tins with cupcake liners and set aside.

In a large bowl or the bowl of a heavy-duty mixer, combine the remaining cake ingredients. Beat on low for 30 seconds to incorporate the ingredients and then another 3 minutes on high. Fold in the apple mixture and then divide the batter evenly among the lined muffin tins. 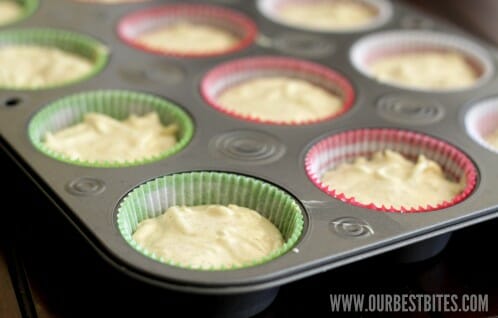 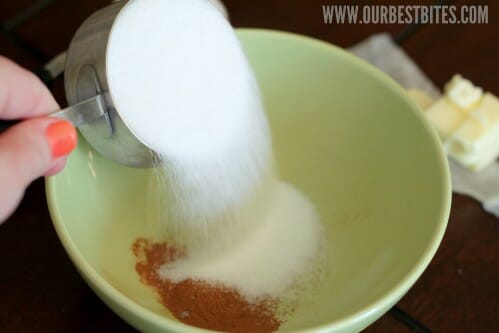 Add 3 tablespoons softened butter and cut it in with two knives or a pastry blender until crumbly. 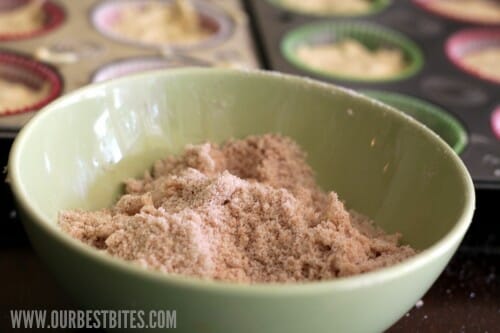 Sprinkle the streusel topping over the cupcake batter. Place the pans in the preheated oven and bake 20-30 minutes or until golden brown on top and a pick inserted into the center of one of the cupcake comes out clean. Allow to cool in pans. Makes 24 muffins. 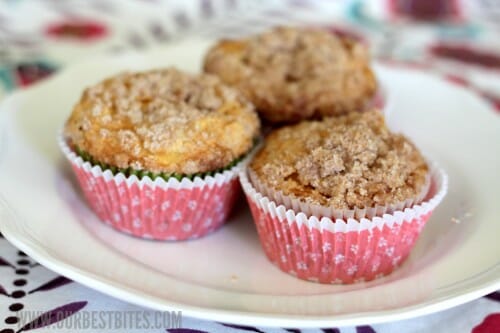 Preheat oven to 350. Lin 2 12-cup muffin tins with cupcake liners and set aside.

In a large bowl, combine the cake mix, oil, cinnamon or pumpkin pie spice, eggs, sour cream, and vanilla. Using an electric mixer, beat on low for 30 seconds to incorporate the ingredients and then beat on high for 3 minutes.

Toss the chopped apples in the lemon juice and then add the flour and toss to coat evenly. Fold the apples into the cake batter and then divide evenly in the lined muffin tin.

Whisk together all the streusel topping ingredients except the butter. Add the butter and cut it in with two  knives or a pastry cutter until crumbly. Sprinkle evenly over the cake batter.

Place the pans in the preheated oven and bake for 20-30 minutes (this really will depend on your oven) or until golden on top and a toothpick inserted into the center of one of the muffins comes out clean. Makes 24 muffins.