One of my favorite flavor combinations is cinnamon and chocolate.  During my college days, I spent most of my paychecks on giant bags of chocolate covered cinnamon bears from the BYU book store.  They are the BEST.  I had those flavors in mind when I set out to make a munchable-sharable-irresistible treat with those same flavors.  This sweet coated popcorn is studded with crushed red hots for bursts of cinnamon and crushed Oreo cookies for a crunchy crumbly chocolaty bite.  I like to top mine with a little drizzle of semi-sweet or dark chocolate and a sprinkle of sea salt.  This Cinnamon Cookie Crunch Popcorn is good any time of the year, but especially fun for Valentine festivities! 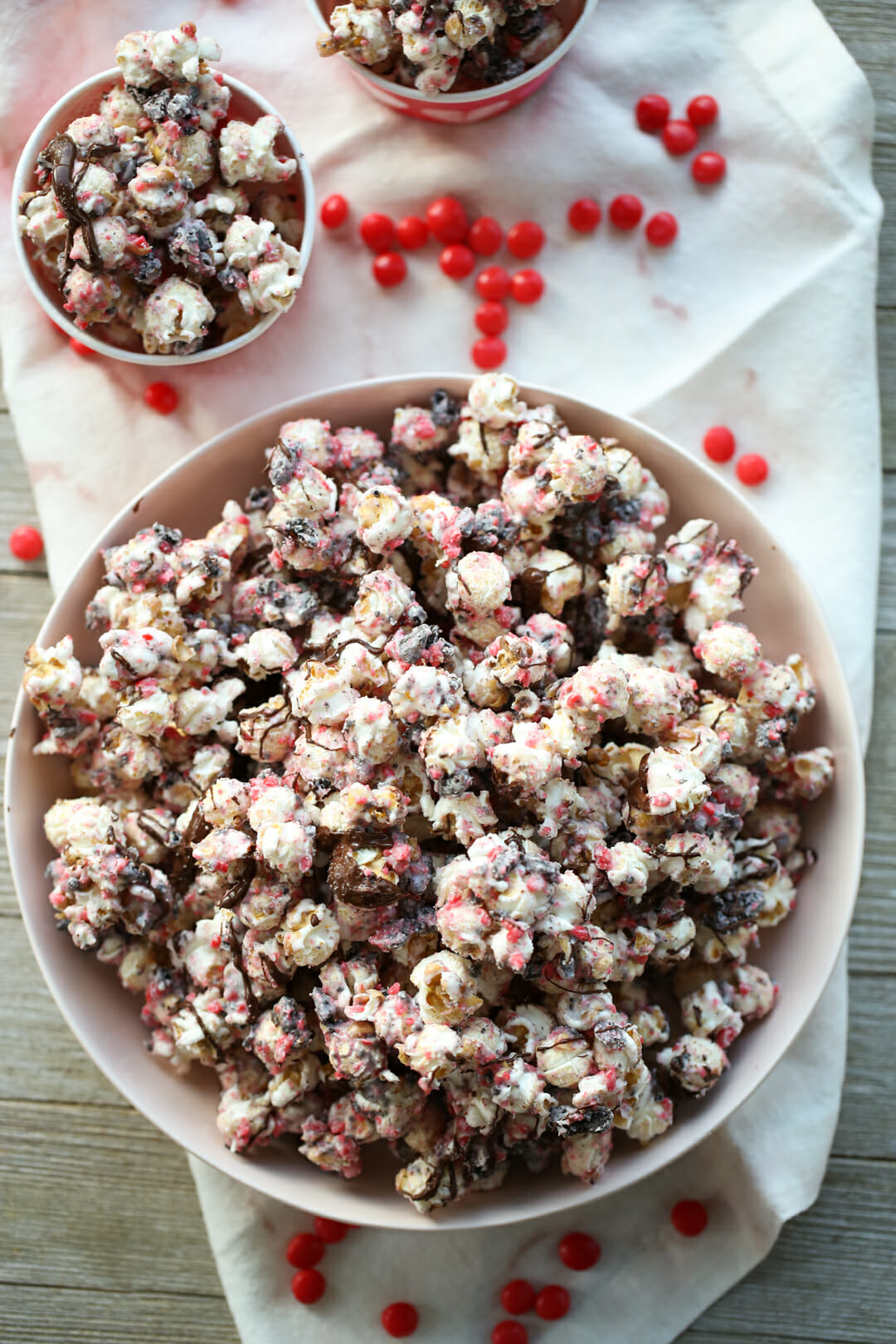 I’m a huge fan of red hots.  I personally think they’re totally unappreciated.  I’m noticing they’re not carried as much by grocery stores, especially in February, so if you have trouble finding them, try Walgreens.  My Walgreens carries them year round in boxes and I believe other similar drug stores would as well.

Since we don’t want to break our teeth here, we’re going to smash up those candies.  Put them in a ziplock bag and then give them a good whack with a meat mallet or hammer or something. 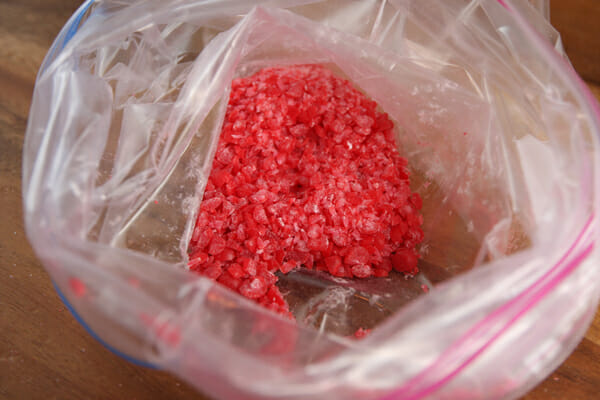 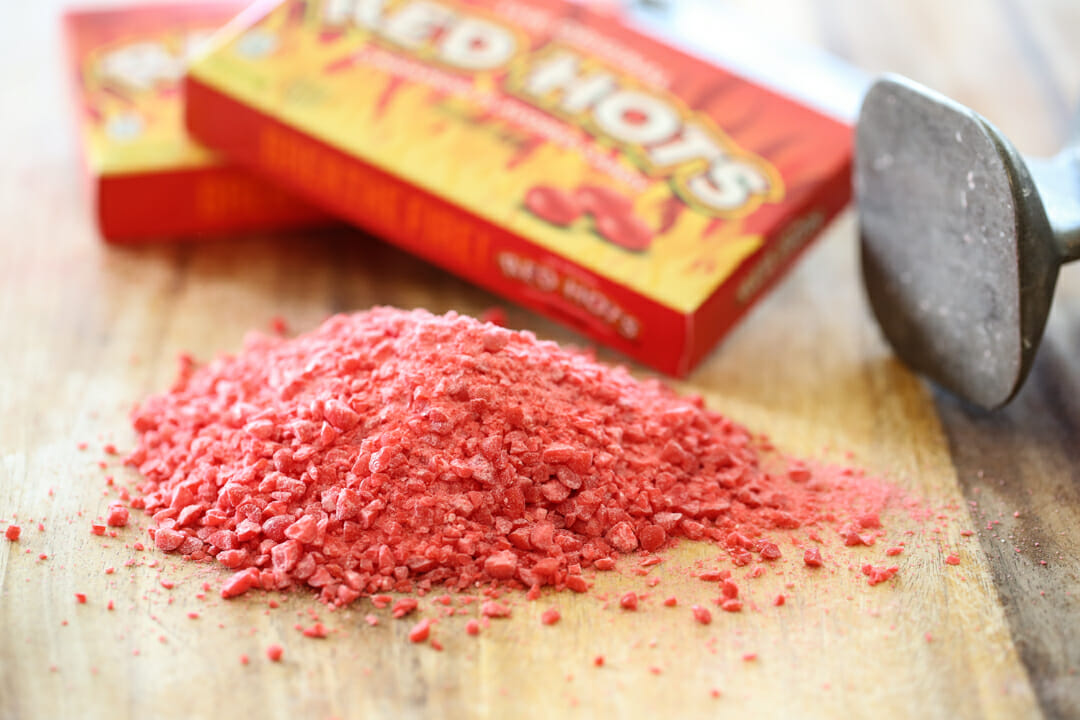 You’ll also need your crushed oreos.  I’ve found I get a much better texture when I actually chop the cookies up finely with a large knife (as opposed to trying to also smash with a hammer) 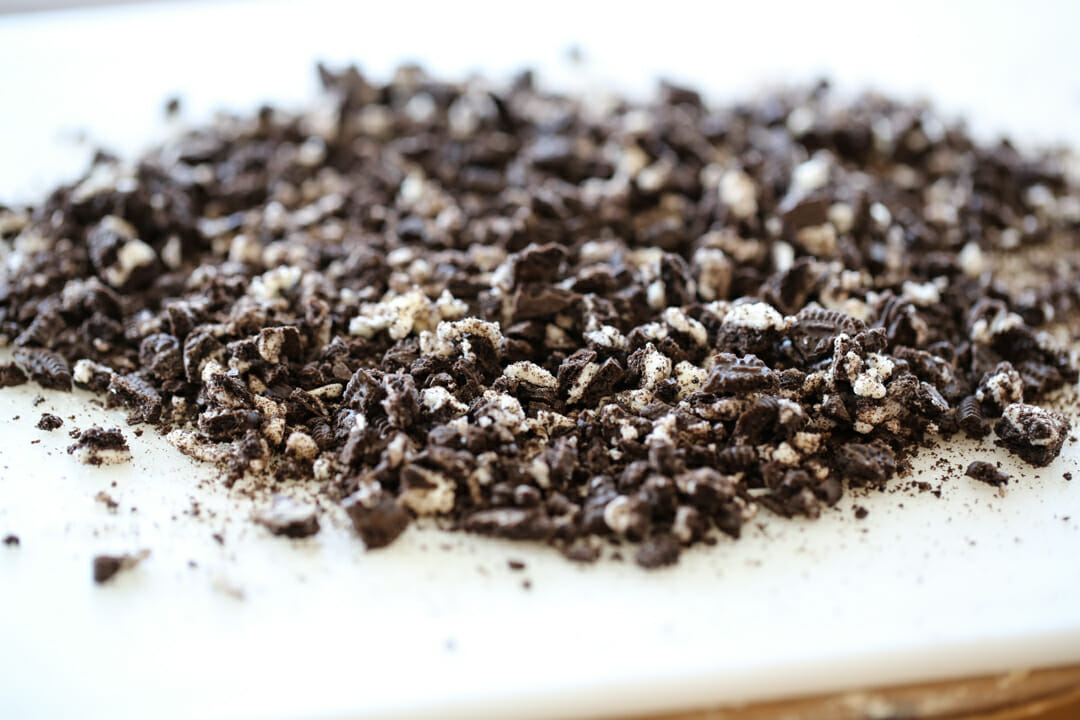 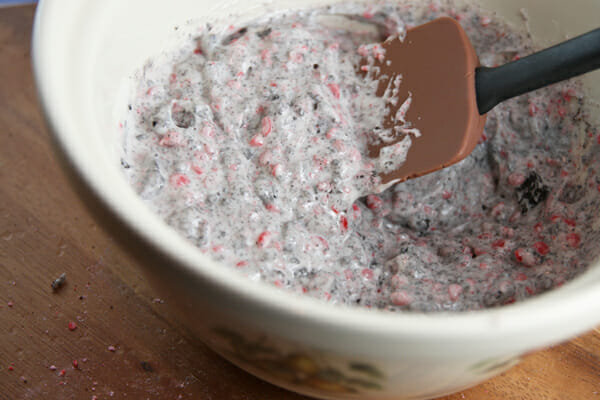 Lastly, popcorn.  You’ll notice my kernels here are large and round, and that’s because I use Mushroom Popcorn.  I just get it on Amazon!

I like to put all my dry ingredients in a bowl so they’re ready to go.  Add your popcorn, red hots and cookies to the biggest bowl you have.  My absolute FAVORITE bowl is this giant one.  It makes mixing popcorn recipes so easy!  It’s the same bowl I talked about and showed you in my recent Strawberry Rice Krispie recipe.

Then you’ll just pour some almond bark over the popcorn.  Almond bark has nothing to do with almonds, it’s simply white candy coating, similar to white chocolate. 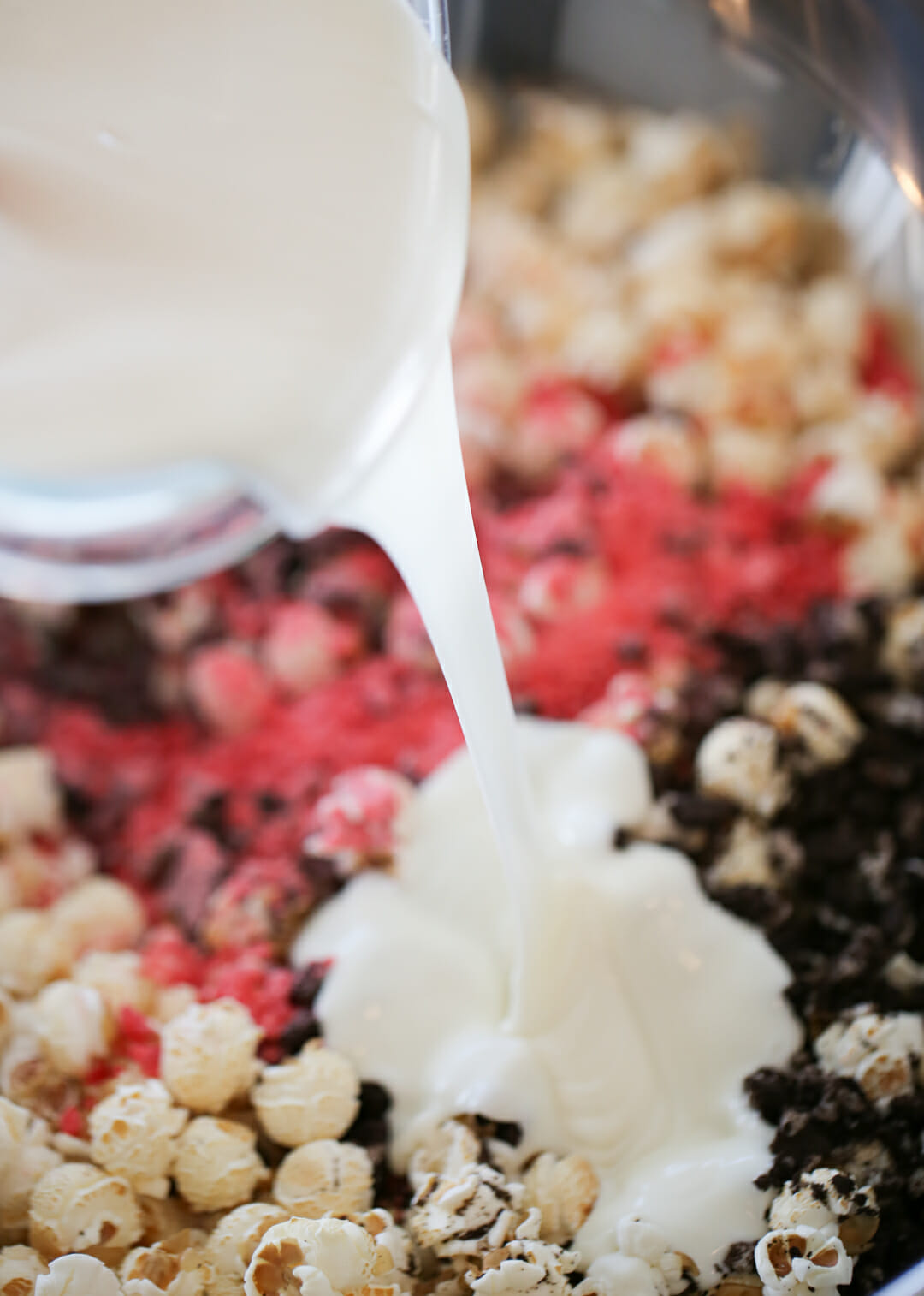 One optional ingredient is cinnamon oil.  You can use extract, but be aware that like in our Peppermint Bark Popcorn, it can cause the mixture to seize. It’s actually not a huge problem, it just looks scary.  If it turns clumpy just pour it on the popcorn real fast and mix it all up.   Cinnamon oil on the other hand is stronger with a crisper cinnamon flavor and it will stay nice and smooth and mix right in so if you can, use it over extract. You can find oils at kitchen supply stores, or at craft stores near the candy making supplies, or right here on Amazon– that’s the brand I use.  I just love cinnamon so I like the extra pop of flavor, but I’m sure this would still be yummy without it! 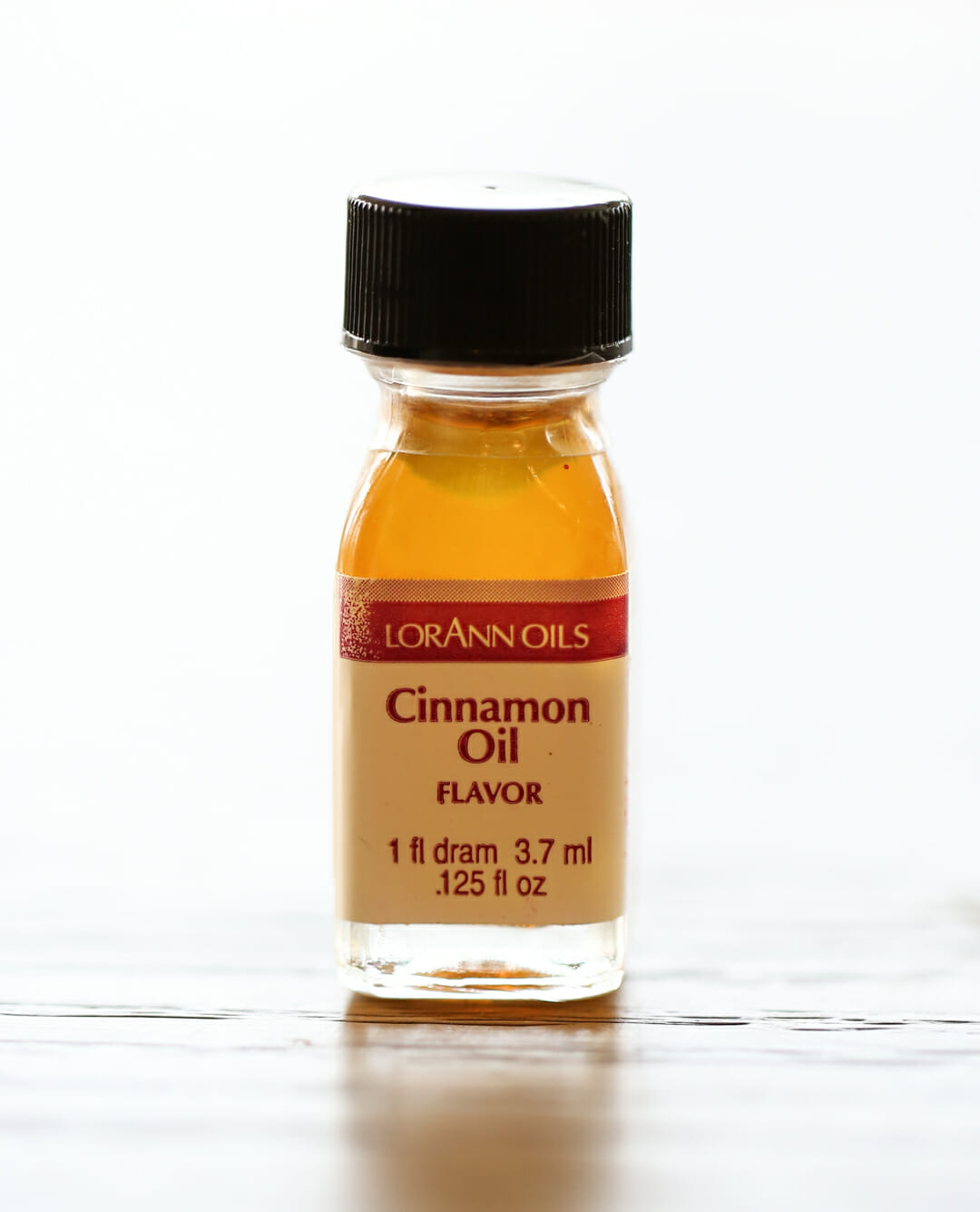 Drizzle on Some Chocolate

Once the mixture is poured on the popcorn and stirred well to coat it all, spread out the popcorn on a big cookie sheet that’s been lined with foil, parchment, or a silicone baking mat and drizzle a little chocolate over the top. 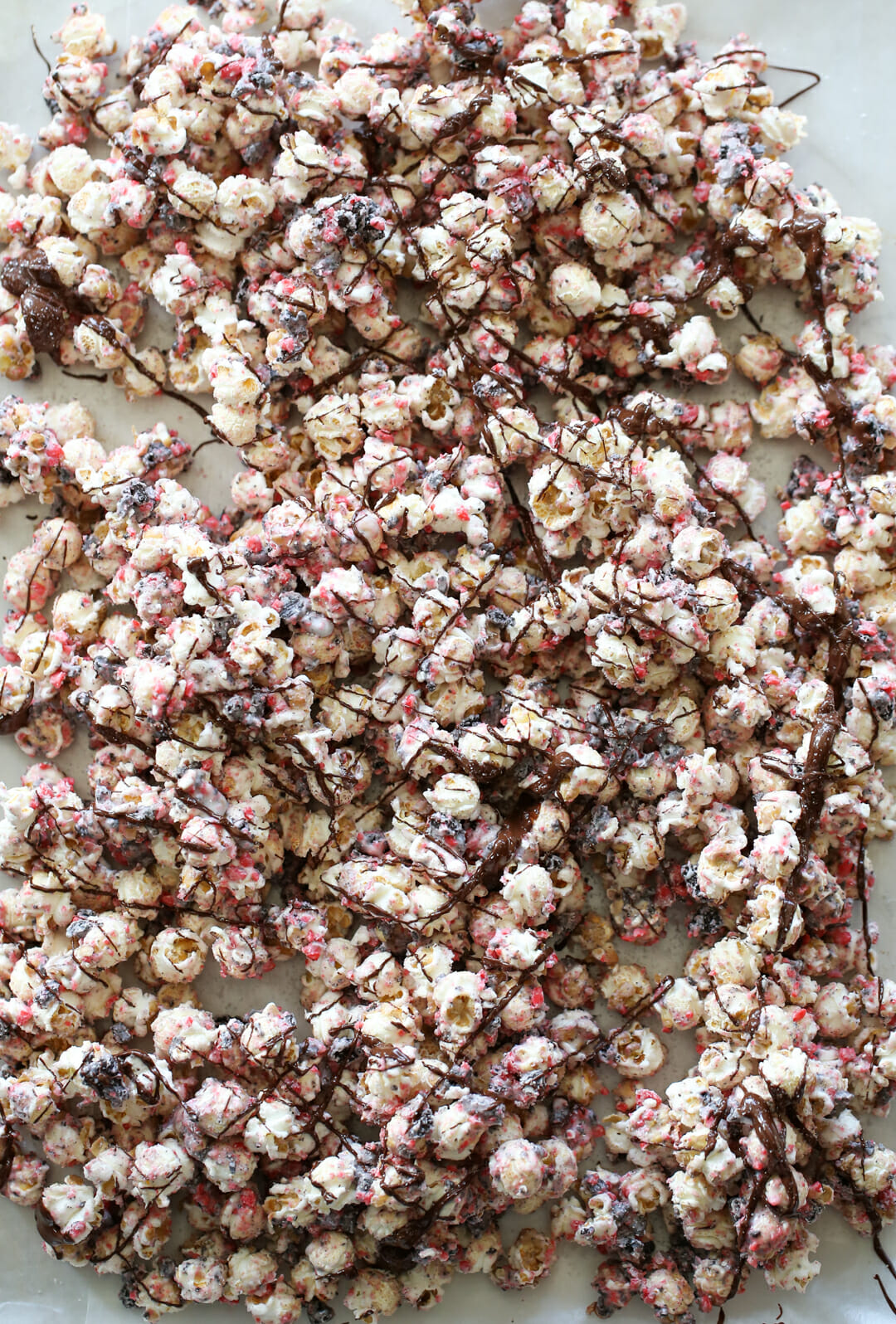 After that, give everything a light sprinkle of kosher or sea salt.  That’s a step some people skip on sweet recipes, but don’t!  It balances out the flavors and enhances everything!  Most sweet things are better with salt.  I like sea salt on popcorn recipes, but kosher salt works great, too. 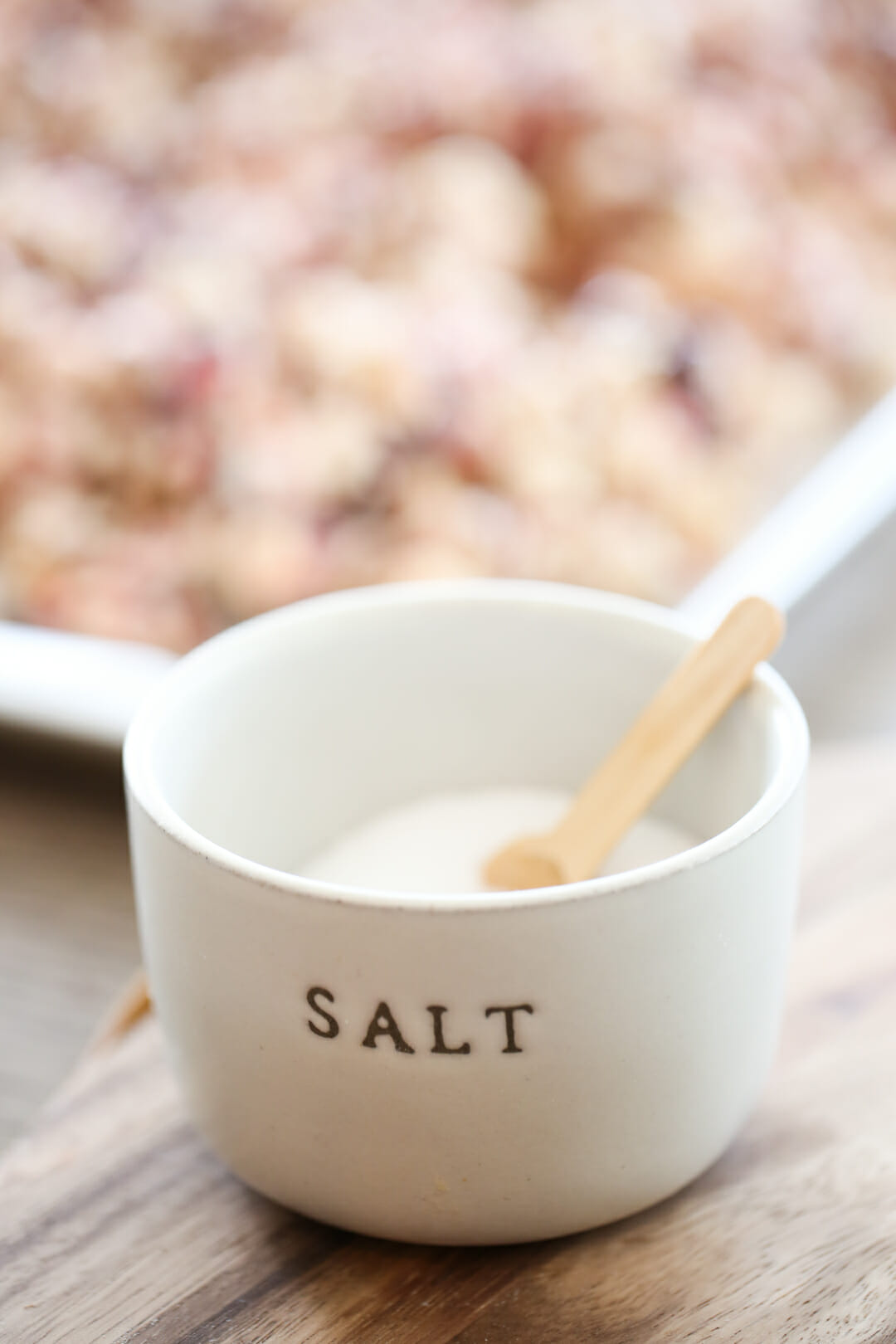 My favorite is the little chunks of chocolate with flaked salt on them. 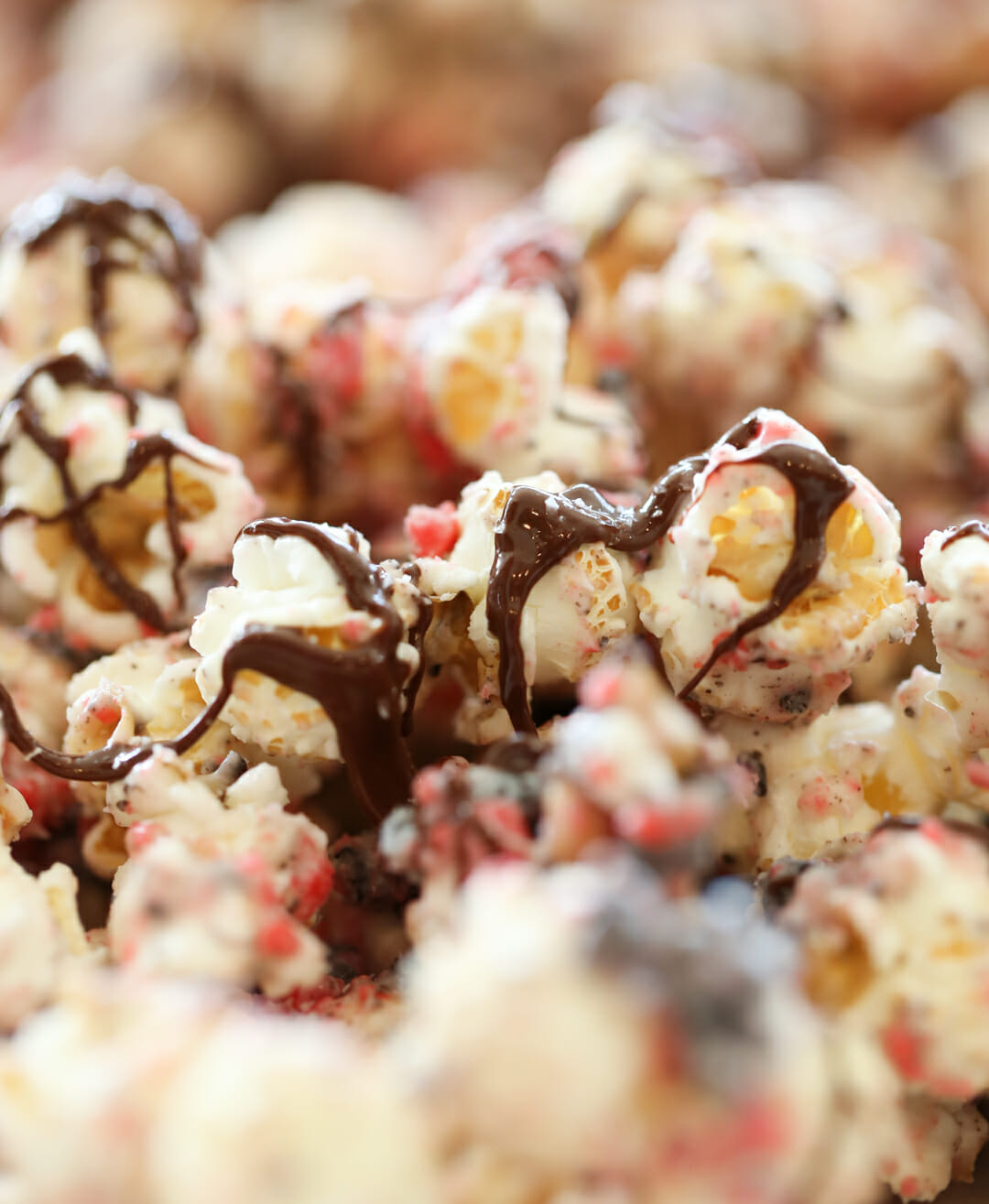 Let the chocolate harden completely.  I usually pop the pan in the fridge, or outside on a cold day to help it along.  When it’s all hardened, break it up into pieces and  you’re good to go. 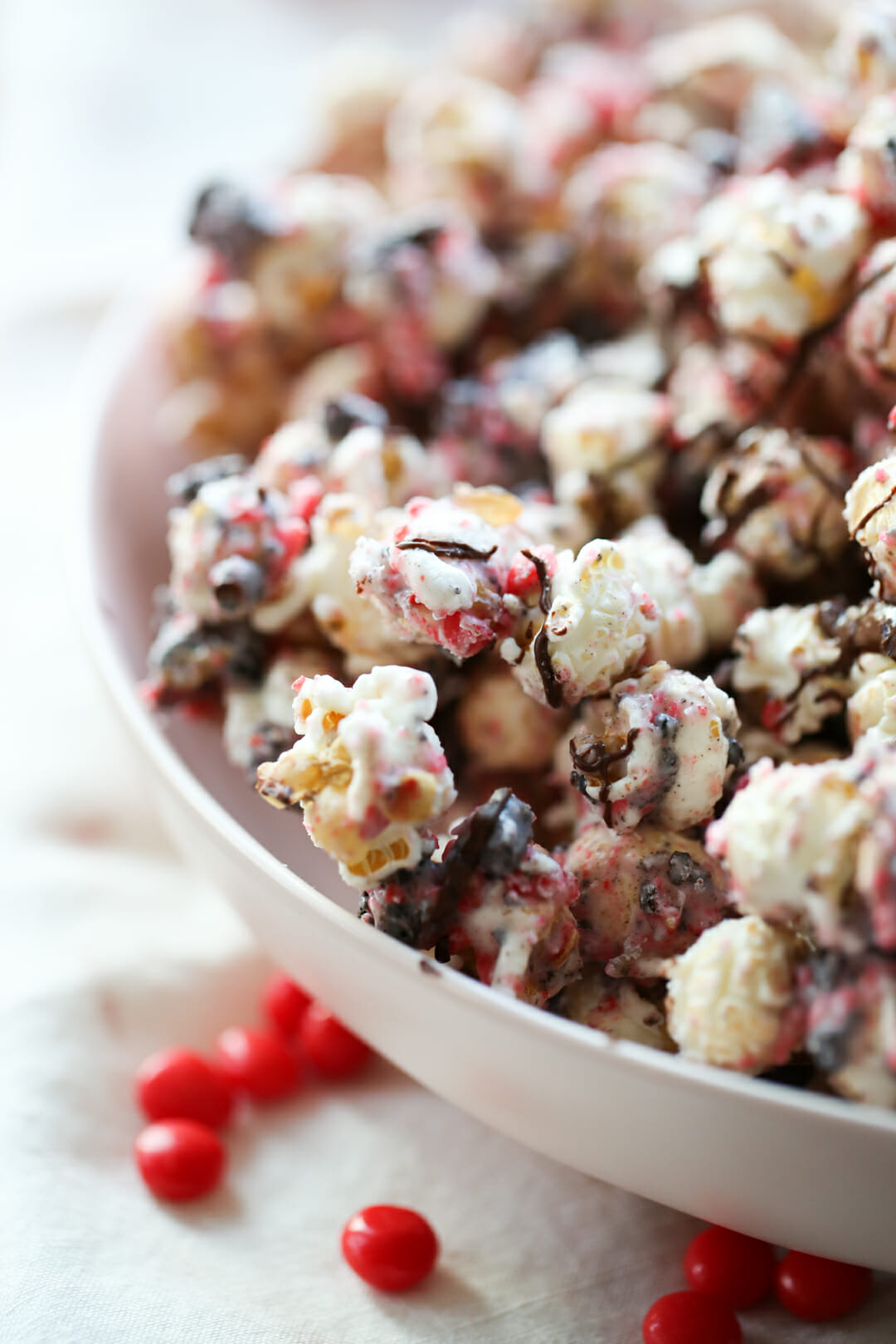 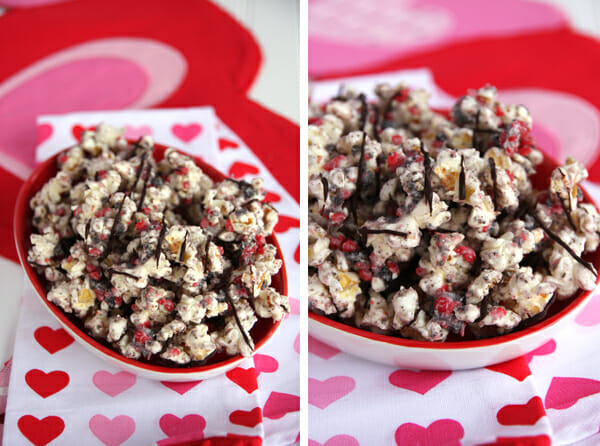 You get little bits of crunchy cookies and bursts of cinnamon candy all with that creamy almond bark.  It’s SO yummy and different and perfectly Valentine-y. 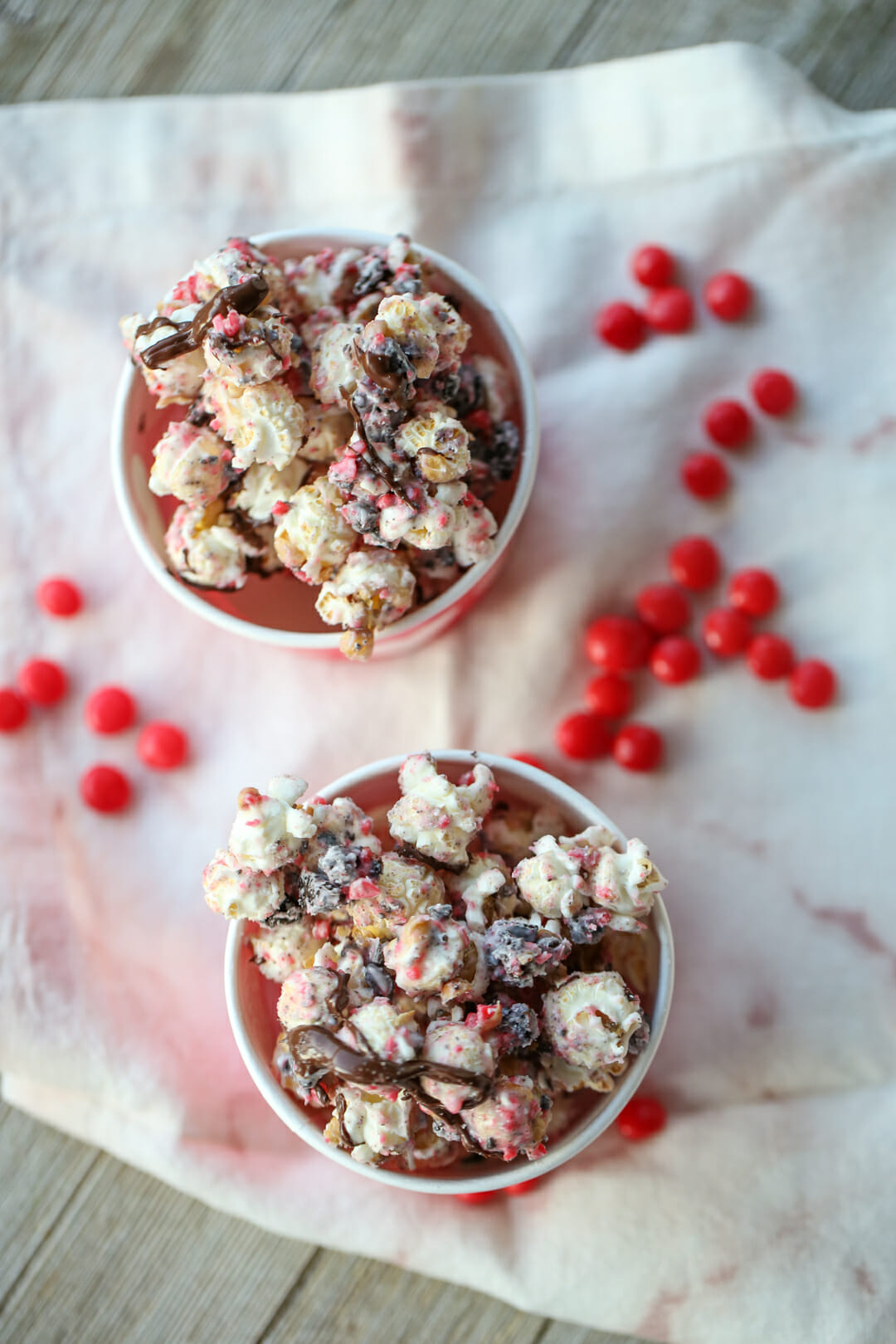 Try it and let me know what you think! 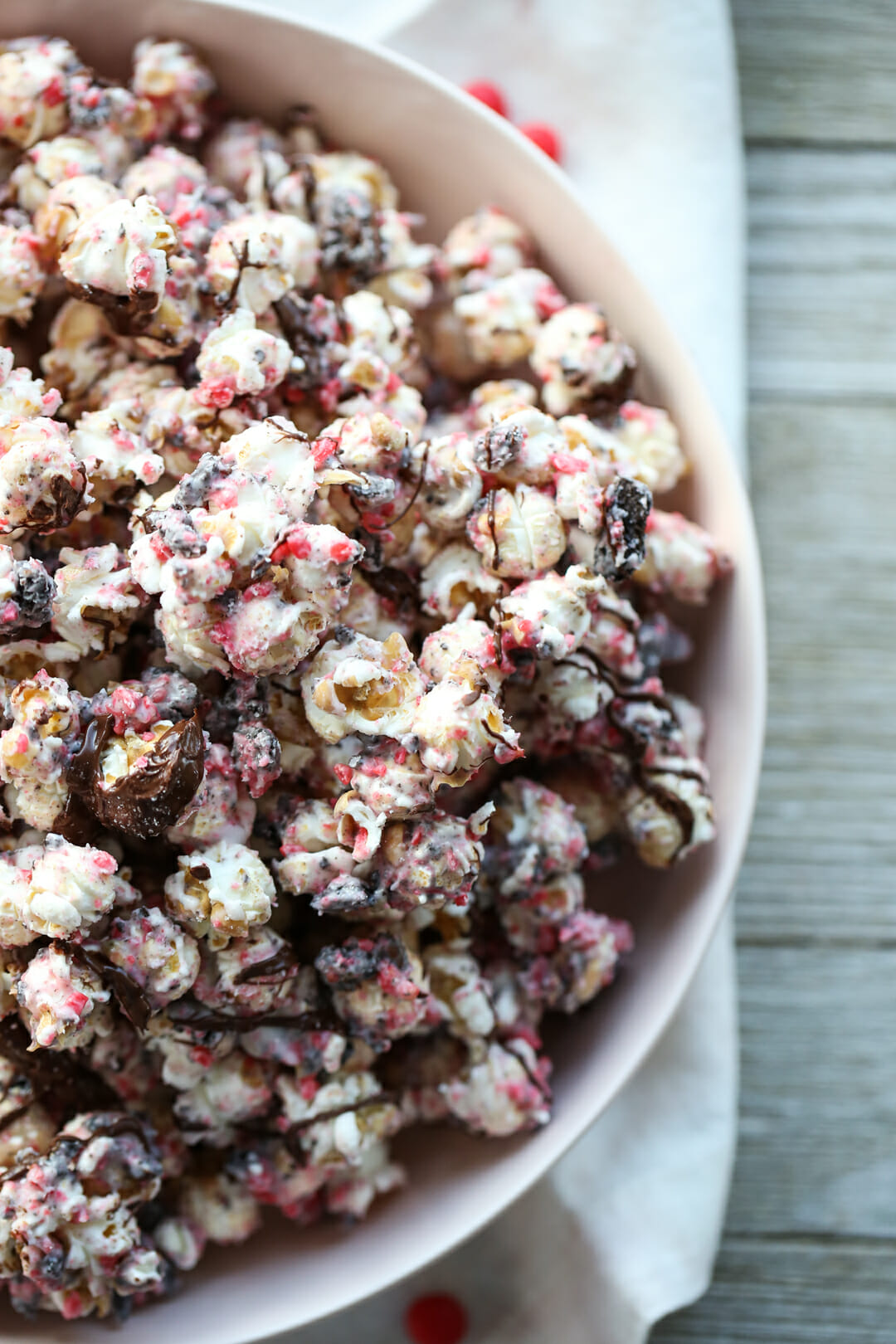 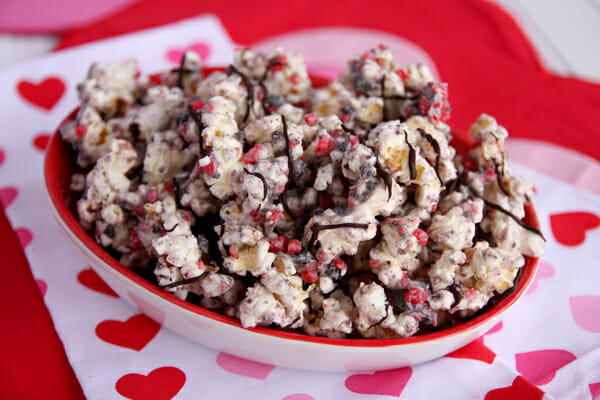 Love popcorn mixes? Check out these other favorites!

Did You Make This?

I’d love to hear from you! Snap a picture on tag me on Instagram, then come back and give this recipe a rating!

Sweet and salty popcorn mix with bursts of cinnamon candy and cookie crunch.

Place red hots in a heavy duty ziplock bag and smash with a meat mallet or hammer to crush.  Roughly chop Oreo cookies into rough crumbs/chunks.

In a medium sized microwave safe bowl, melt almond bark according to package instructions until smooth.  Add cinnamon oil to taste, if using.

Sprinkle kosher or sea salt lightly over mixture to taste.  Let popcorn mixture harden, place in fridge to speed it up.  When completely dry, break into chunks and just try to stop yourself from eating it all in one sitting.

*Cinnamon oil (available online or at cooking stores and sometimes in the baking aisle) works well for this.  You can use extract, but mix it in fast as it can cause almond bark to seize. 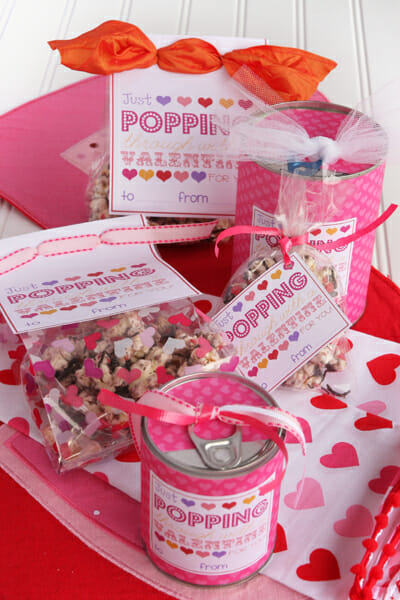