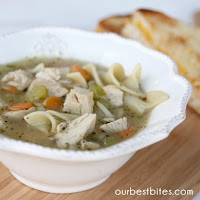 Before you roll your eyes and stop reading this post after seeing the title, let me just get this out of the way: I don’t make my own chicken broth.  Well, not always. Okay rarely.  You know Mr. Swanson? Well he and I have a very great relationship. I use a lot of chicken broth in my cooking and I practically buy the canned stuff by the case.  It tastes great, it’s relatively inexpensive, and let’s face it- I don’t have time to simmer my own home-made broth each week.  BUT, hear me out.  There are times when it’s actually really cost effective, not that time consuming, and super convenient. 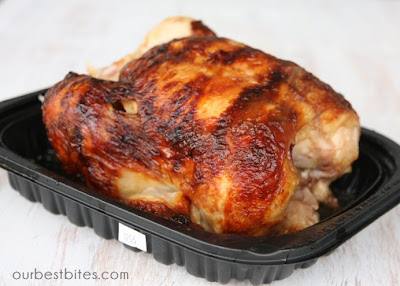 Okay, well any rotisserie chicken, but I pretty much always buy mine at Costco (speaking of Costco, did you see what I saw there this weekend??)  In fact, on most Costco trips I just grab one even if I don’t really have a plan of what to do with it.  And every single time, I leave the store and load my boxes of stuff I never knew I needed until I walked into Costco completely planned purchases into my car, and then I take the chicken up front with me.  Without fail, before I even get out of the parking lot, there’s a leg missing.  Case in point: 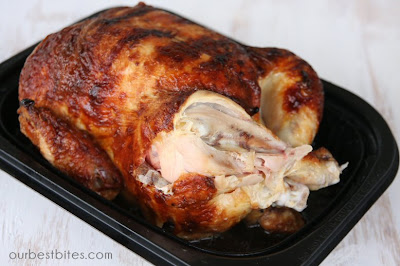 I honestly forgot that I bought this chicken for the express purpose of taking a picture of it and took that chunk off before I even got to the first stop light.  Doh!  If any of you are ever driving around the Boise area and see some crazy chick in a blue Armada holding up a whole rotisserie chicken and chewing off the leg, just honk and wave, okay?

Wow Tangent.   Anyhow.  Rotisserie Chicken.  Most people slice off the nice white breast meat first.  At least that’s what I do.  Then I pull off the good looking stuff to roll over into another meal, like Taquitos or something, and then I put the rest in the fridge.  I always have good intentions of doing something productive with the leftovers, but the next day after everything is sort of congealed and carcass-y looking (oh my gosh I hate the word carcass, especially in relation to food I’m eating but I sort of can’t avoid it here) I always end up tossing it in the trash.  And I sort of feel a little bit guilty every time thinking that there are people all over the world that would pick every bone clean on that thing.  There’s still quite a bit of meat on there- I just don’t want to actually eat it.  So I started making broth with it- and guess what?  It’s so easy.

I always have carrots, onions, and celery in my house- and that’s really the base.  It takes about 2 minutes to throw together, an hour to simmer away on your stove without you even touching it, and then you can pop it in your freezer in portioned containers to use whenever.  I’ll show you how!

1.  Throw a bunch of stuff in a big stock pot with your left-over chicken (ahem) carcass.  Really no measuring required here.  The absolute minimum would be a quarter of a large onion, 2 ribs of celery, and a couple carrots (or baby carrots like I have) plus some salt and pepper, and herbs.  Since it’s the dead of winter and I have no fresh herbs (and because this is easy, remember? I threw in some parsley from the store and some dried herbs from the spice cabinet.  I also added garlic.  Because I add garlic to everything. 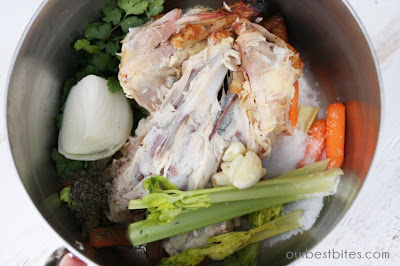 2.  Add water so it covers your chicken by at least an inch or two 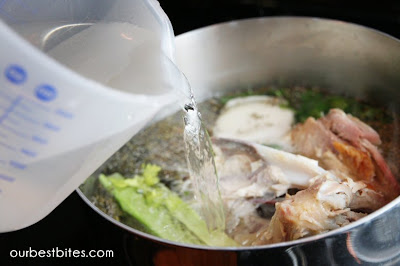 3.  Bring pot to a simmer, cover, and cook for about an hour.  Generally you see broth recipes that need much longer to cook. The problem is that in order to do that you have to start out with a huge amount of stuff because it will reduce so much.  I’ve found that this quick-cooked simple broth has a great flavor in just about an hour.  Depending on what’s in there, you may get some stuff floating on top (looks sort of foamy) and you can just scrape that off with a spoon. When it’s all done cooking, taste the broth with a spoon and add salt and pepper to taste.  If it’s really flavorful, you can always add more water at this point to stretch it out.  Strain out all of the solids and you’re left with delicious, flavorful, homemade broth.  I turned right around and made homemade Chicken Noodle Soup and grilled cheese sandwiches for dinner and it was SO good. 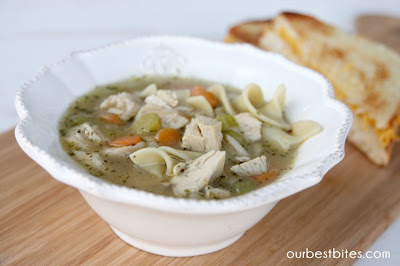 I put the rest in my freezer for later! 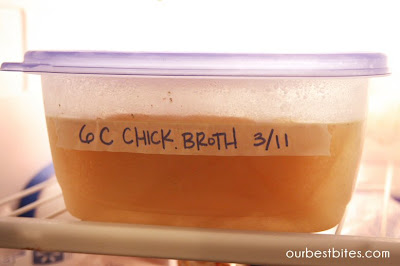 Like I said, if you’ve already got most of this stuff on hand anyway- why not?

1 leftover chicken (aka carcass) with excess fat removed (our crockpot “fautisserie” chicken works great!)
2-3 ribs celery, if they have leaves on- don’t cut them off!
2 carrots or a handful of baby carrots
1/4 of a large onion, or 1/2 of a smaller one
3 cloves garlic, smashed with a knife (see what I mean, here)
10 peppercorns
1 heaping tablespoon kosher salt
Herbs:  fresh sprigs of parsley, thyme, and a bay leaf.  Rosemary and sage also good.
OR use dried herbs.  I use 2 teaspoons each of sage, rosemary, and thyme, and also a handful of fresh parsley.

Trim any excess fat off of chicken.  Place all ingredients in a large stock pot and fill with water until it reaches about 1-2 inches over the top of the chicken (Generally that’s about 4 quarts for me, which is 16 cups).  Bring to a simmer and cover pot.  Simmer for 1 hour.  Strain mixture to remove solids.  Cool broth to room temp and then store in portioned containers in the freezer for up to 3 months, or in the fridge for about 5 days.  Quantity varies, but it will reduce in volume after simmering.

Two very quick answers to questions we get asked all the time:

Q:  Do you have a basic Chicken Noodle Soup recipe?
A: We both love to use this recipe– just omit the dumplings, add noodles, and replace the milk with broth.

Q: What’s the difference between broth and stock? Are they interchangeable in recipes?
A: The quick answer is that both broth and stock involve simmering water and vegetables with parts of a chicken.  Generally broth is made with chicken meat, like a whole chicken while stock is made with a large quantity of bones.  Often in stock, the bones are roasted first as well.  Overall, stock is known for having a deeper, richer flavor.  Because the bones contain a lot of gelatin, stock usually has a little more body.  I think this is true for homemade restaurant quality stock, but when it comes to the store-bought options, there’s not a huge difference (in my opinion).  Some companies aren’t even consistent in labeling.  So are they interchangeable in recipes?  Generally speaking, yes.   I buy broth 100% of the time.  It’s more widely available and I like the light, clean flavor.  I believe Kate does the same which is why you’ll see us call for broth in most all of our recipes.  The recipe above does contain bones, but it’s mostly the meaty chicken scraps attached that gives the broth its flavor.