Can you believe we’re at the end of Healthy January? And can I tell you all how badly things are going for my diet right now? Yeah, I have a batch of cinnamon rolls rising right this very minute. It’s been a very long day that was just made infinitely longer when I learned that The Office and 30 Rock are re-runs tonight. I nearly cried. And yes, I do realize how very pathetic that sounds. What can I say, I’m overworked and my sample contacts don’t adhere to my eyeballs like they should. But I digress.

Anyway, one of the better moments of my very long day was this very quick dinner. Pork is often overlooked by dieters because it has a reputation for being fatty, but pork sirloin and tenderloin is EXTREMELY lean–often more so than chicken breasts. I like buying a big pork sirloin roast, cutting it into thirds, and then freezing them. After they’ve thawed a bit, I’ll slice the thickest portion into slices (about 1 inch thick or so) for pork chops and save the ends for something in the crockpot (BBQ pork sandwiches, Kalua pork, pork for tacos, you get the picture…)
This recipe is a summer favorite of mine on the grill, but it’s awesome all year. One great thing is that you can broil these in your oven and they turn out just as well (if not better!) than they do on the grill. Just line your broiling pan with foil before you cook the pork chops so you don’t have suicidal thoughts whilst scraping broiled honey mustard off the bottom of the pan later that night…

The quick glaze comes together fast with dijon, honey, and garlic 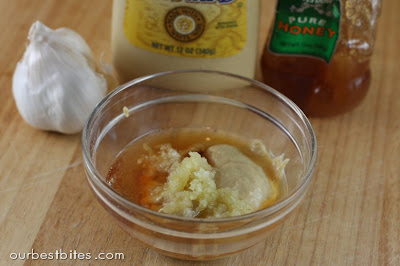 prepare the pork by sprinkling with salt and pepper 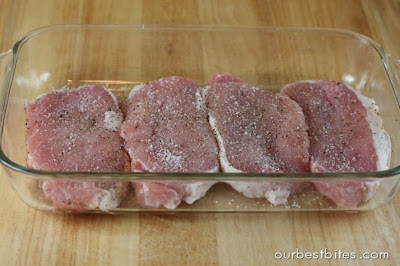 and then give them the smokey flavor with some liquid smoke 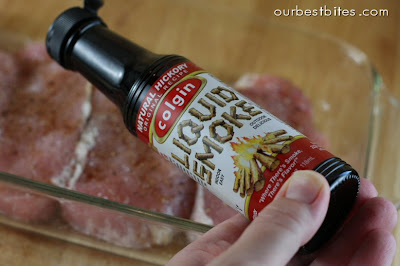 Toss them on the grill 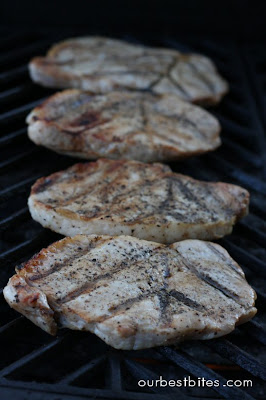 And the glaze goes on at the end of cooking 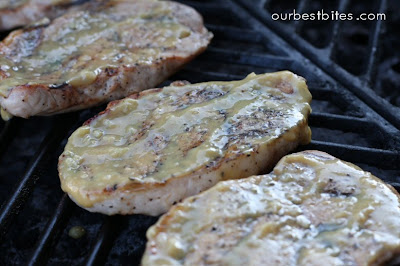 Cook them just right and they’ll be nice and juicy inside. 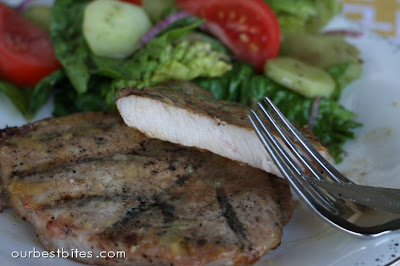 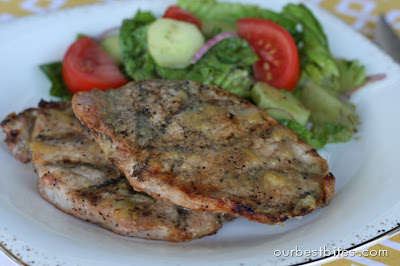 Smoky Honey Mustard Pork Chops
4 4-6 oz. pork loin or sirloin chops
Kosher salt and pepper
Liquid Smoke
3 Tbsp. Dijon or whole grain mustard
1 1/2 Tbsp. honey
2 cloves minced garlic
Sprinkle pork chops with Kosher salt and freshly ground pepper. Give them a liberal dousing of liquid smoke (you can usually find this either near the seasonings or the BBQ sauce/condiments in the grocery store). Set aside.
Heat oven broiler to high or preheat grill. Combine honey, garlic, and mustard. Place pork chops on broiler pan/grill and cook for 4-5 minutes. Turn and cook another 4-5 minutes. You want the internal temperature to be at least 165 (that’s a little pink inside), but you also don’t want to overcook them because they’ll become tough. So you may need to adjust your cooking times a little, bearing in mind that they have two minutes to cook after the initial 8-10 minutes.
Baste with honey mustard mixture and cook an additional minute. Turn and baste other side; cook for one additional minute. Remove from heat and allow to stand a few minutes to seal in the juices.
I like to serve it with a small baked potato and a salad (this one has avocado, red onion, and orange slices, but whatever tickles your fancy). It would also be awesome with Garlic Balsamic Asparagus.

Sign up for our newsletter and get
7 exclusive dinner recipes