The first time I ever tried spoon bread it was from this classic Jiffy recipe.  It’s definitely yummy, but it’s also a little dense and can sometimes be mushy.  After I tried real, legit spoon bread from scratch, there’s no going back.  If you’ve never heard of spoon bread, it’s sort of like a cornbread souffle.  Or just really soft, moist cornbread.  So soft, that it’s eaten with a spoon.  It’s a creamy corn mixture that’s combined with eggs and beaten egg whites so it gets puffy and has a tender airiness to it.  After experimenting with a lot of recipes, this one from Cook’s Country is my favorite.  It’s bursting with corn flavor and really does have the perfect texture. The recipe itself dirties a few dishes, but it’s so delicious that I don’t even care.  And the greatest thing is that I’m going to show you how to make this a couple of different ways:  the basic recipe, which is amazing both eaten with things like gravy and bits of turkey on your plate, or drizzled in honey or slathered with a bit of butter.  Or if you’re in the mood for a savory side dish, I make a variation with Parmesan and chives that’s pretty killer.

Start by soaking some corn meal in whole milk.  I’ve made several spoon bread recipes that end up kind of grainy and have found this step really combats that problem and eliminates grit; resulting in a nice smooth mixture in the end. 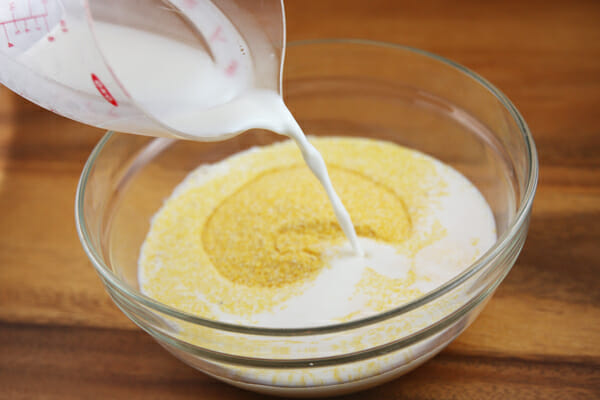 While that’s soaking, toss some butter in a saute pan and add corn.  In the summer months, when fresh sweet corn is readily available, kernels cut straight off the cob is the absolute best way to go.  But frozen corn kernels works just fine, especially during the fall and winter.  Just please, please don’t use canned corn.  Seriously.  Don’t.  If you’re using corn off the cob, the kernels will start to turn golden brown in the butter, thawed frozen corn generally doesn’t brown, but it will get nice and buttery. 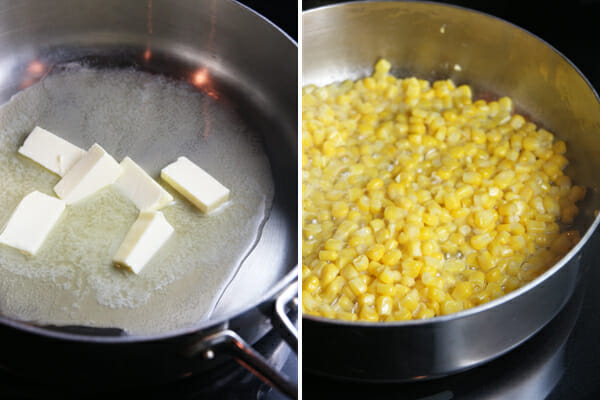 And then you’ll pour in some more whole milk.  Yummy, creamy, whole milk.  (Pssst, I secretly love when recipes call for whole milk so I have an excuse to buy it and then I feel super naughty when I “accidentally” pour it over my cereal.) 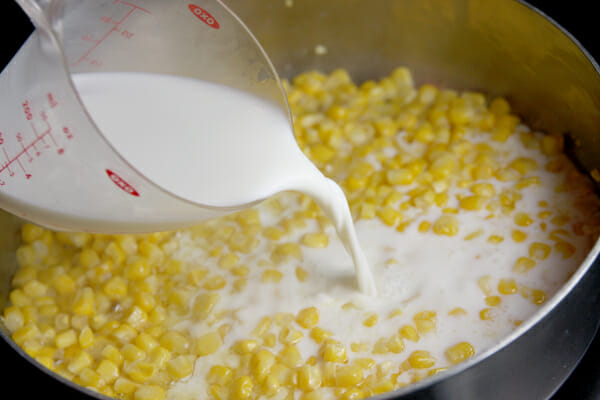 You’ll also add salt, a pinch of cayenne, and a little sugar.  One thing I changed from the original recipe is that I find I like it much sweeter.  It also has to do with the fact that frozen corn probably isn’t quite as sweet as corn off the cob, so I feel like it needs a little more to compensate.

That mixture will come to a boil and then you’ll take it off the heat, put a lid on it, and let it steep for about 15 minutes.  Then use a blender (I love my Blendtec), or immersion blender to blend it all together into something rich and creamy. 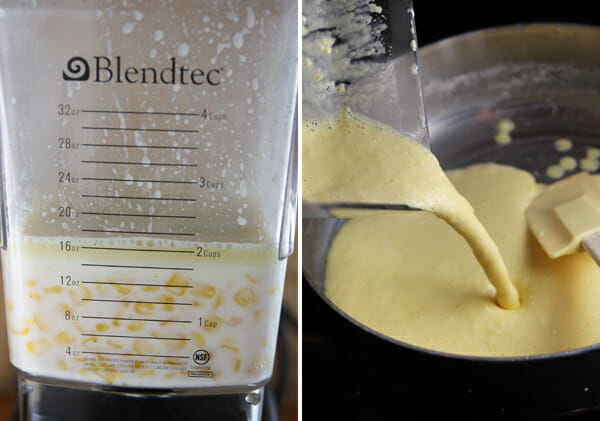 And then add that soaked corn meal. 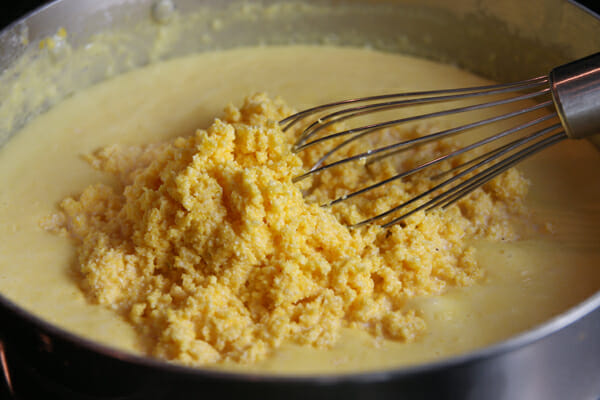 The mixture will be quite liquidy at first and then after it cooks for just a few minutes, it thickens and pulls away from the bottom of the pan. 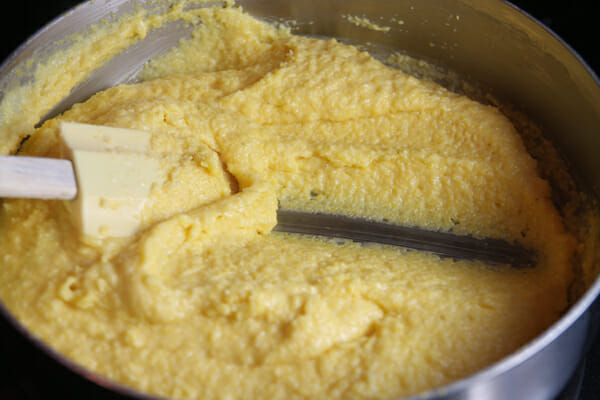 After it cools off a little, you’ll whisk in some egg yolks, and then fold in the beaten whites.  Now we’ve been over folding before, and it’s important in this recipe to get the beautiful rise.  Beat your egg whites until stiff peaks form.  Take about 1/3 of the beaten whites and stir them into the corn mixture. 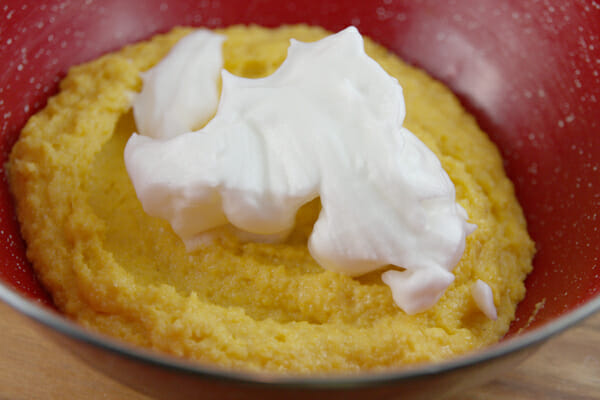 Stirring helps lighten the texture of the corn mixture so that you can easily fold in the rest. 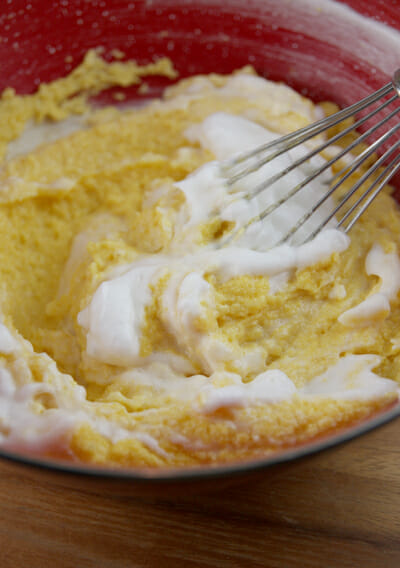 Adding a little of the egg whites at a time, use a rubber spatula and gently cut through the mixture to the bottom of the bowl, scrape the bottom and then fold over onto the top of the mix.  Continue until all of the eggs are incorporated. 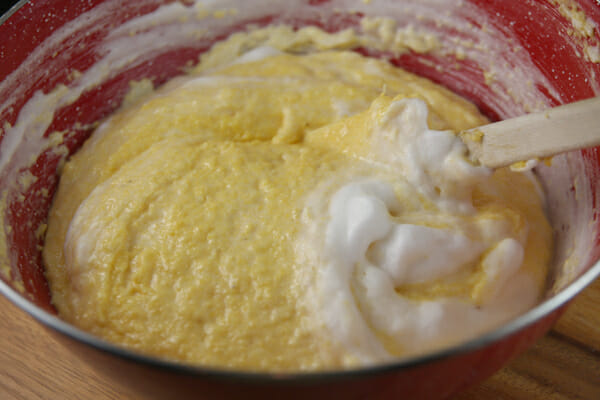 You can bake these in a souffle pan, individual ramekins like I did, or in an 8×8 pan. 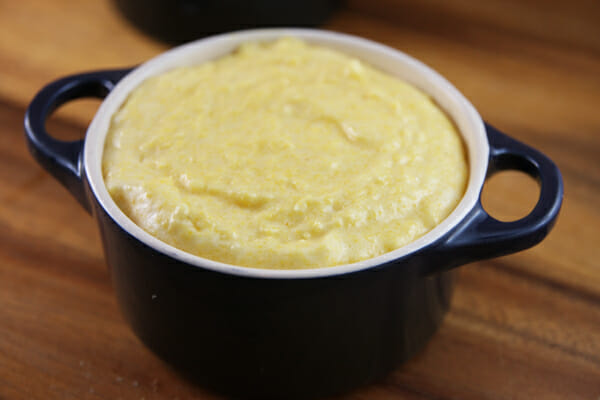 You can see from this shot in the oven how gorgeous these are.  They’ll fall a little once they’re out, that’s normal. 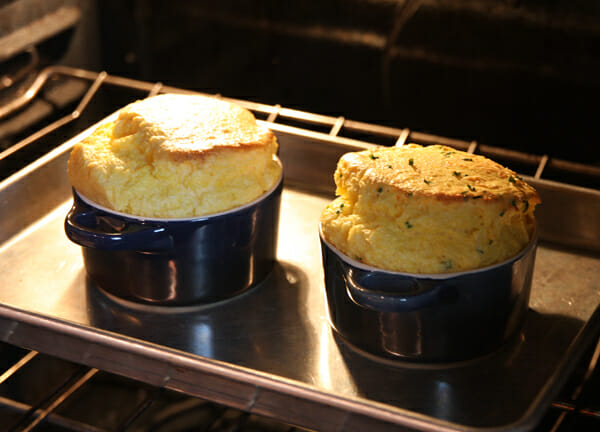 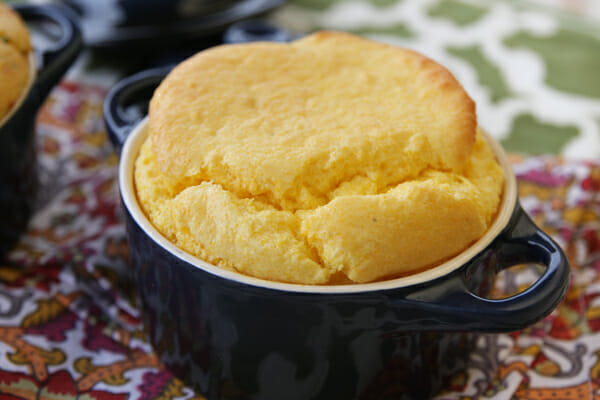 The plain spoon bread isn’t overly sweet, so it’s great spooned onto plates to marry with gravy and stuffing, but my favorite way to eat it is with a drizzle of honey (or even better, honey butter.) 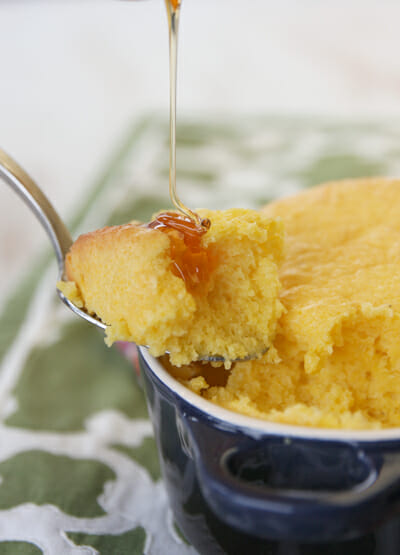 There’s something about that soft, puffy texture with the combination of sweet, sticky honey, that just tastes dreamy. 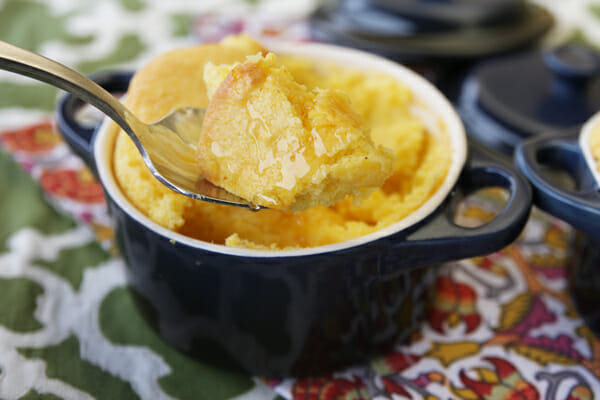 However, I’m split 50/50 because I also LOVE my savory adaptation with Parmesan and Chives.  If you want to try it savory, I add 2 tablespoons chopped chives and 1/4 cup finely grated cheese like Parmesan, Pecorino, Gruyere, etc.   to the mixture right before you add the egg whites.  I usually sprinkle a few extra chives and cheese on top right before baking 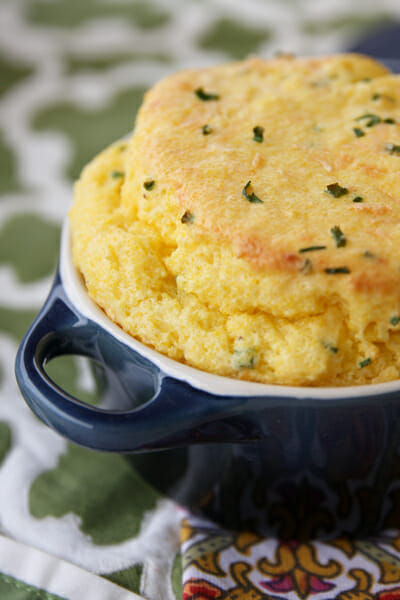 The texture is fantastic and the flavors of the chives and cheese blend perfectly. 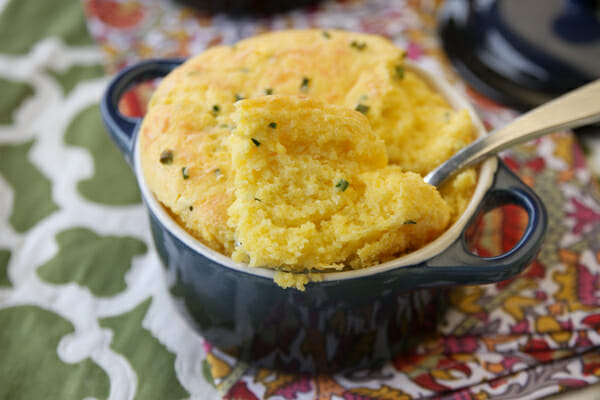 Because I know there are planners out there who are wondering about making this ahead, here are my thoughts.  You definitely get a better rise and a prettier “puff” if you bake this immediately after making it.  That’s the best option.  However I’ve experimented and it will still taste great if you make it earlier in the day and keep the unbaked spoonbread (all ready in its baking dish) covered with plastic wrap in the fridge, or even the day before.  You do want to serve it warm though (not re-heated) and since it will fall a bit, plan on baking it right before you want to eat it.

Soft, fluffly, and deliciously beautiful, this spoonbread is a incredible as a side for a fall meal. 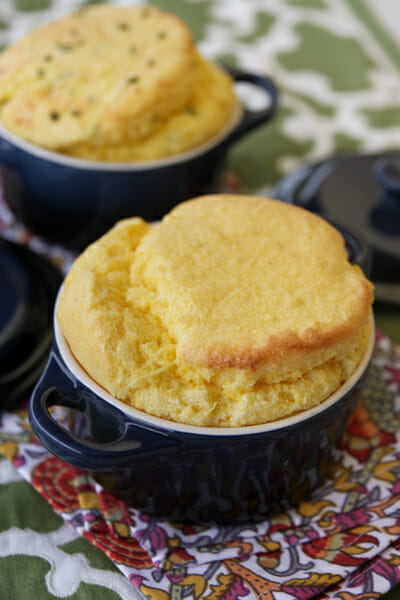 In case you missed the link the other day, we’re finally telling people where to find us on Pinterest.  I know, welcome to 2012 and it’s almost over.  Click here for details!

ALSO-check in here over the weekend because there is a greeeeeat giveaway going up some time before Monday- you won’t want to miss it!